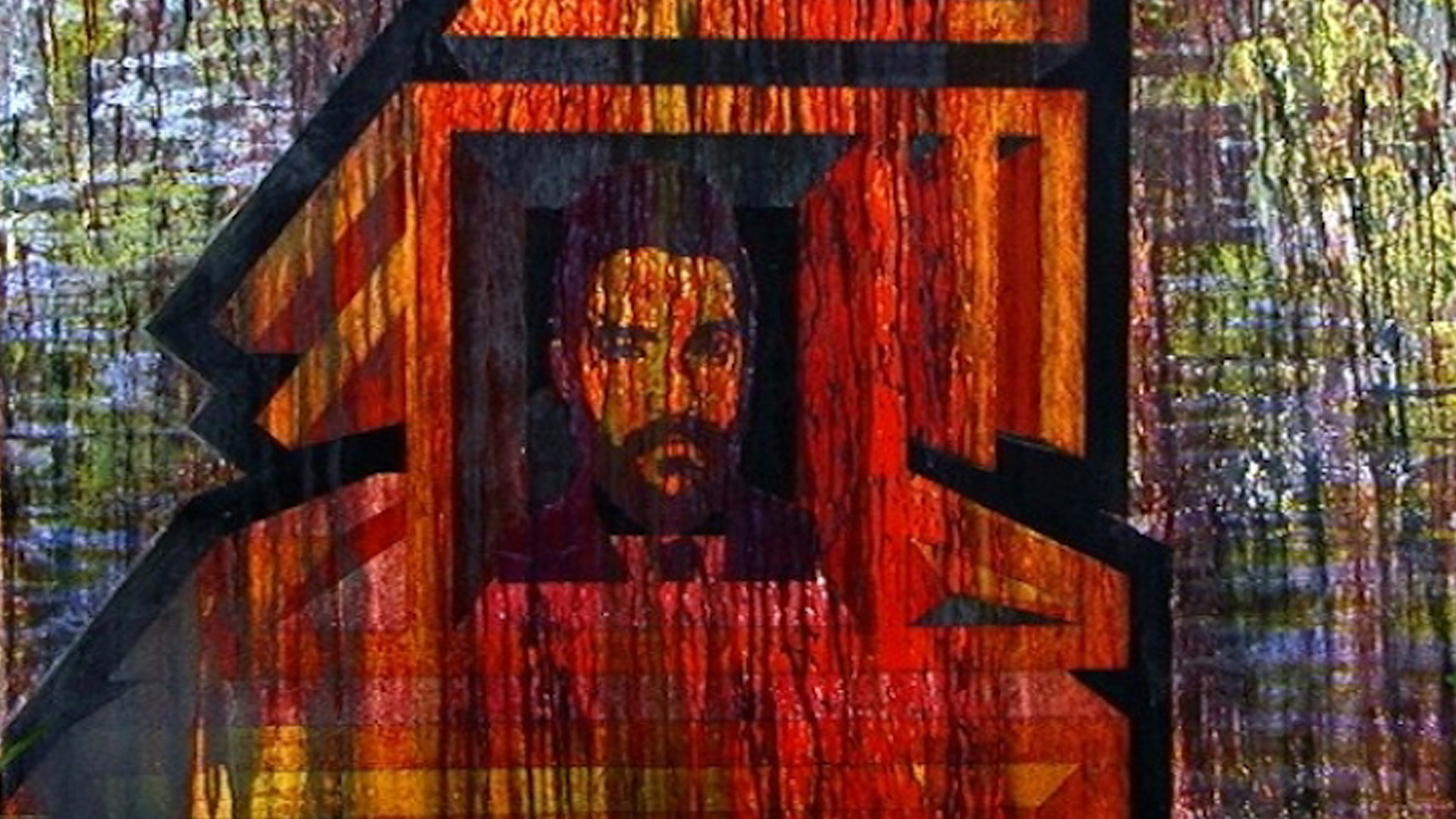 From the outside, the windows reveal spattered walls, fragmented glimpses of paintings, and a bottle of acrylic paint. Inside, the same windows filter sounds, the comings and goings of a street in Vedado. Inside is the studio; outside is Havana, being rediscovered by the artist.

Politically and culturally, the city bears the traces of a diplomatic agreement with the United States: Havana as a hypothetical regional mecca of contemporary art, and more than anything, as the host of the most unthinkable, astute, and timely social ingenuity.

From his Vedado studio, Glexis Novoa hears about guanicheo, the weekly paquete and the online ads on Revolico while listening to someone hawking canned meat, electric lights or pens. From there, he feels Las cosas como son—Things as they are—and knows that his return is not just geographical.

In the 1980s, Novoa was one of the artists included under the term plástica joven—young art. He had already made his mark with shows and interventions like No es lo que ves (It Isn’t What You See), in which he made as if to slit his belly open, dropping animal viscera from the wound.

After that, he was heard of in a few shows in New York or Paris, or because he returned to Havana sniffing out the earliest stages of performance art and trying to document, in minute detail, the rebirth of the 1980s. Except for an alternative group show organized by Espacio Aglutinador, he did not show in Havana until 2015, when Detrás del muro, a project in the 12th Havana Biennial, took him under its wing.

A year later, Novoa is back, and with no less than a solo show at the Museo Nacional de Bellas Artes.

The works in Las cosas como son / Things as They Are have a feeling of retrospective, but also continuity and renewal. The dust rising from the fallen statue of Lenin, meticulously drawn in graphite, doesn’t bring thoughts of veneration, but of the re-semantization of his image. The same with Vladimir Mayakovsky, Tatlin, the monument to the workers’ party in Korea, Miami, and other modernists symbols represented in the show’s 11 sculptures.

These works are a continuation of the installation at the Biennial and are presented here on concrete bases that reference typical Havana architectural forms, while offering a tribute to the art of sculptors Florencio Gelabert and Mateo Torriente.

The paintings in the show reflect not only Novoa’s return to Havana but to a previous artistic context. All were made in Novoa’s Havana studio and are, as he says, a return to his Etapa práctica, or “practical stage,” the series he was working on when he left Cuba in the 1990s.

“That was a time of ironic intent with the art institution, where I took advantage of the conventions that were responsible for an artist´s prestige or not, as well as institutions, museums, and galleries,” he recalled. “It was a time when my whole generation was questioning the extreme political and social situations in the country, and I decided to express that in my work.”

But the new paintings in the museum have gone through the filter of history, and do not replicate that artistic period. Although they maintain the aesthetics that characterized Novoa’s work of the 1980s, the paintings of 2015–2016 offer another symbolic level, and plainly address a different time.

“Just listening to friends, people involved in the art world, or people going by in the street selling things,” said Novoa about his time in Havana, “I began to discover a new universe, different things that matter today.”

“The same happens with the famous guachineo [a slang phrase from reguetón]. People want to guachinear—that word is new to me, but I realized that has a meaning for young people and if you want, it also carries a significant status. Not everyone can go to guachinear, so it becomes the object of desire.

“On the other hand, I am discovering that someone like Carlos Garaicoa is not only an admired artist, but in this context he is also a kind of institution respected by other artists, as he has his own studio and a very powerful gallery behind him. That is to say, people have changed, and the artistic context has changed too.”

In its essence, Novoa’s Etapa práctica of the 1980s was about developing a form of expression for what could not be said explicitly. Though he’s reclaimed this part of his creative trajectory, Novoa says that at this point he is not obligated to use coded language, or to use it as an act of rebellion. This time around, there is still a double meaning to the words, but as the artist he’s the one supplying it, with the idea of making the work more complex, rather than as a way of expressing what cannot be said.

In a single canvas, Novoa mixes words like Che, Cohiba, and Cuba—archetypes of the mounting tourist presence on the island, as well as the jumble of political icons and tourist souvenirs.

Something similar happens with Hemingway. “The figure of the writer is already a kind of Cuban symbol that is sometimes not understood, even by the Americans,” said Novoa. “For that reason, in the background I added a variation of the Cuban flag, with more blue stripes. It’s also why I used Garaicoa’s name as if it were the logo of an American car.”

Asked whether his return to the island signaled a depoliticization of his work, Novoa responded: “If we see it from the point of view of painting, as it has to do with the Etapa práctica, is not a distant look to politics. One of the works is called La bestia, The Beast; it’s the largest painting in the exhibition and it refers to Obama´s car, which is of course a political issue.”

“However,” he continued, “I believe that the reality of Cuban society today has a depoliticized look. It’s not my intention to depoliticize my work, but the Cuban contemporary context is doing that. Ideological political language is not used as it was before—society is avoiding it. Even from the point of view of the government, the same methods are not used. People are adopting a new discourse, and my work reflects it. That doesn’t mean it’s apolitical, it’s just in line with the new currents of thought in the country.

“We had a great tendency to collective creation,” Novoa said of the plástica joven generation. “We learned a lot from each other’s work, and we exchanged information all the time. We were a very united generation, so we had so much strength. Later, this union continued. I had more contact with some of them. We’ve all changed and matured, we now have events and different perspectives in our lives.”

Among the works that Novoa developed at that time were the portraits of those colleagues, “using their faces with postures and gestures of martyrs because, even when they were not [martyrs], they seemed to be, in the political context of those years. It was not Che, Camilo or Bolivar, but less familiar faces: Ciro Quintana, Flavio Garciandía, Tonel, Gerardo Mosquera, Ana Albertina, Adriano, Tomás Esson, Carlos Cárdenas.”

Novoa still makes portraits, but they no longer show faces, only words. Tania, for example, has to do with radical art, institutional policy, migration, and the art system in Cuba. But that piece can reference Tania Bruguera or Tamara Bunke, “Tania the Guerilla” [a popular figure in post-Revolutionary Cuba]. It depends on who is interpreting it.

“Tania Bruguera has proclaimed herself as the last revolutionary of our generation,” Novoa said. “She continues to take an attitude like the one we had in the 1980s. She keeps her radical attitude, very consistent with that idea. She is becoming a very influential figure, mainly from the media point of view. That’s why I use her name atop the flag of anarchy, which is also the flag of July 26 in Cuba [the date of the storming of the Moncada Barracks by Fidel Castro and his fellow fighters in 1953].

“With this duality between the two Cuban Tanias I am not making a negative or ironic statement about either of them. I limit myself to the portrait of two real characters. Almost no one has supported Tania the artist, including me. She has a specific project that is the exact opposite of what is now going on with art in this country. Her project has to do with the cultural context of the past, and she’s doing it at a time when other things are driving the conversation.

“Some 20 years ago it made sense to criticize things and push hard, to demand and risk our lives to change what was wrong. Although many of those problems still persist, at least we have the perception that a change is coming. Twenty years ago I would not been invited to exhibit at the museum, and that sort of change is what matters today.”

Asked if his new works constitute a sort of essay on contemporary Cuban art, Novoa replied, “That´s not my intention, but maybe it is. In Cuba there is still no art [local] market. Cuban artists have their eyes on the international ‘mainstream.’ They are not part of a [localized] context, they are not interested on it.

“The Biennial is different. It’s their opportunity to show work to the ‘mainstream’ that comes, physically, to Cuba. Everyone wants to show their work on the grand platform that is Havana, but the artists here don’t work for a local context because it doesn’t exist—for example, there’s no network of real galleries. The ones that are here do their work in isolation. They sell outside the country, but the local interaction is zero.

“In Cuba, something that is much more real is the traqueteo, the hustle—the market here that is almost illegal because no one gives a name, they prefer anonymity. But they move more art than Galería Habana, for example. They buy works here and almost immediately sell them in New York or Paris. That is also part of the market. Many alternative things work better than the official ones, so the word traqueteo appears in my work.”

Is there another etapa creativa—creative stage—coming up for Novoa? “It may be, but so far I have not made any decisions. Artists always see their career as a kind of recurring dialogue, formal and conceptual, with the same idea. We’ve been reclaiming previous ideas because we’re always looking for an evolution. Although some artists revisit their work as simple repetition, if an artist is consistent in his integrity as a thinker, then his work must evolve.”

Glexis Novoa: Las cosas como son / Things as They Are runs through January 16 at the Museo Nacional de Bellas Artes in Havana.