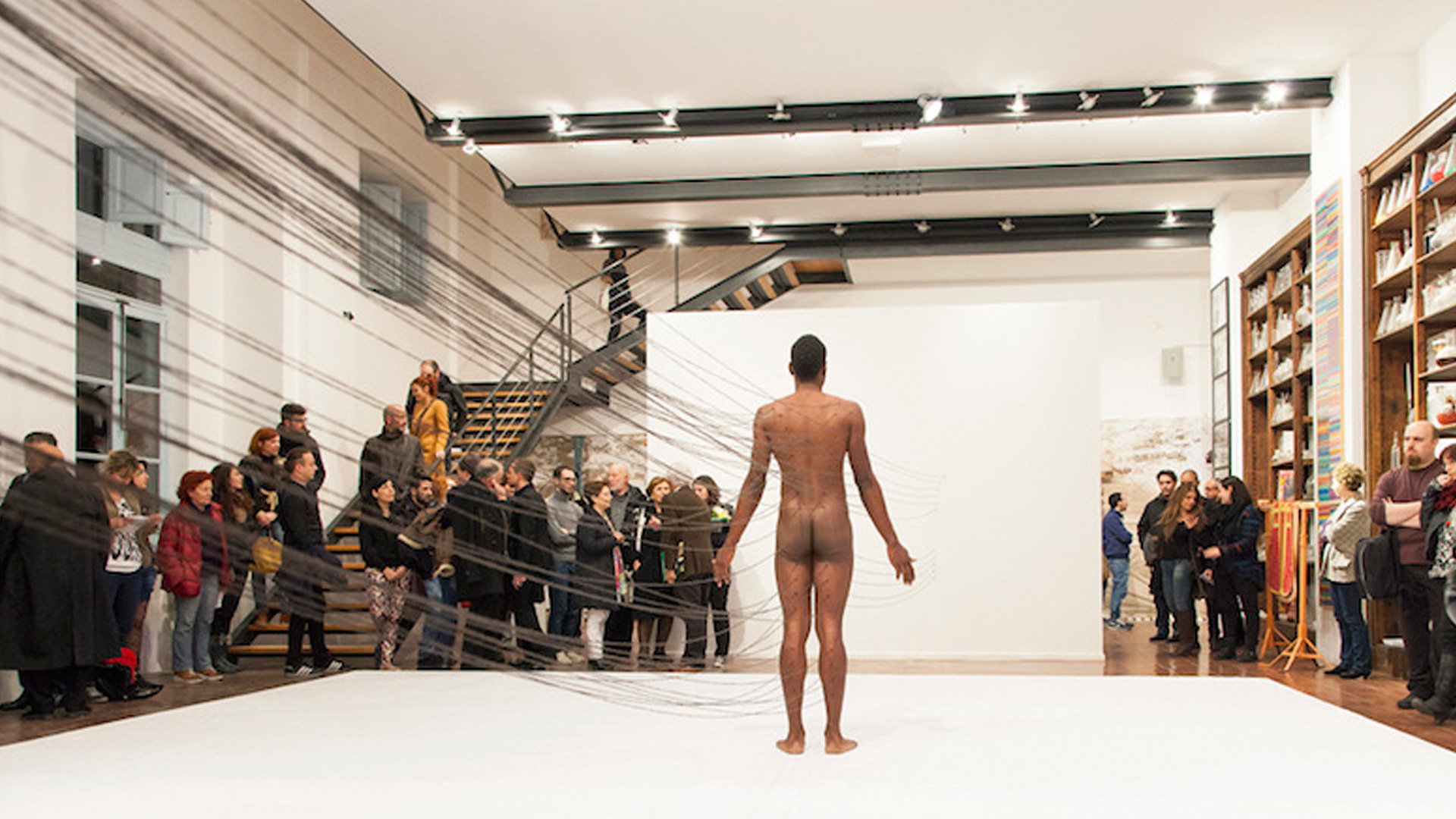 Gottardi in Havana. On Thursday, the Fábrica de Arte Cubano (FAC) opened Sin dogmas y con muchas dudas (Without Dogmas and with Many Doubts) surveying the work of the noted architect Roberto Gottardi. Best known internationally as one of the three architects of the National Art Schools (now ISA), Gottardi has completed several other projects in Havana, as well as set designs.

León in Madrid. Later this month, the Juana de Aizpuru Gallery opens a one-person show by Glenda León. Estados Transitivos (Transitive States) includes works in several different media, including video installations, drawings, watercolors, an artist’s book, a textile work, a large-format photographic work, an object in silver made in the Buena Vista workshop of Mayelin Guevara, and a small silicone object made by Factum of Madrid. Léon has written that the show expresses “a realization that everything is transitive, that nothing is forever, not only our lives but the actual state of things, of nations; values such as money, etc. erase the transitive and we are left with the essential—that is perhaps the principal proposition.” Opening Wednesday, October 26 and running through December 7.

CINTAS Awards Postponed in Miami. If not for Hurricane Matthew, this past weekend would have seen the announcement of this year’s CINTAS Award winners, in a ceremony that also marked the opening of the exhibition of visual arts finalists. The event has been postponed, with a new date to be announced. This year’s visual arts finalists include Pavel Acosta Proenza, Aurora de Armendi, Ivan Toth Depeña, Vanessa Díaz, Lilian Garcia-Roig, Diana Guerrero-Macia, Gabriel Martínez, Hugo Patao, Carlos Rigau, Norberto Rodriguez, and Juana Valdés.

And Larraz Opening Rescheduled. With the hurricane, last week’s opening of Made in USA, the solo exhibition by Julio Larraz, has been rescheduled for this Thursday, October 13. The reception begins at 7 p.m. at Ascaso Gallery in Wynwood.

Campos-Pons speaking in Miami. Also this Thursday evening, María Magdalena Campos-Pons will talk about photography in her work, as part of the Lowe Art Museu’s Newman Lecture Series in Photography. The talk will take place at the BankUnited Center. For more information, and to RSVP, click here.

Cano at the Miami-Dade Library. At the main library building of the Miami-Dade Public Library, Pablo Cano: To the Eye Behind the Keyhole, 1979–2016 presents a selection of marionette sculptures from the artist’s personal collection. Created largely from found objects, Cano’s performance sculptures are both whimsical and at times surreal. The exhibition continues through January 7.

And Prieres in Hollywood, FL. At the Art and Culture Center/Hollywood, Manny Prieres: Surface to Air presents a series of large-scale paintings that explore the 21st-century move from print to digital media. Prieres painstakingly replicates the perfect reproductive capacity of the digital print—an absurdist response, rendered with mathematical precision. On view through October 23.

Complicated Beauty in Tampa. Teaming up with the Bronx Museum of the Arts and several private collections, the Tampa Museum of Art kicks off a series of Cuban art exhibitions with Complicated Beauty: Contemporary Cuban Art. Celebrating recent additions to the museum’s collection—among them, Simply Beautiful by Mabel Poblet and Cada sonido es una forma del tiempo (Every Sound is a Shape of Time) by Glenda León—the show traces Cuban art from the 1970s to the present. Among the more than 20 artists are José Bedia, Tania Bruguera, Los Carpinteros, Pedro Pablo Oliva, Diana Fonseca Quiñones, Sandra Ramos, and Lázaro Saavedra. Through January 22.

And Traces of Cuba. At the Ybor City Museum, this exhibition explores the Cuban influence on Tampa life and culture over the past century or more, from Ybor City’s cigar industry to José Martí’s many visits to Tampa and the Cuban flavors in Tampa cuisine. The exhibition opens October 20 with a talk by Yale professor Dr. Roberto González Echevarria and a reception featuring Cuban music and food. Details here.

Martiel in Miami. Carlos Martiel is one of the international performance artists showcased in Pierce, Mark, Morph at the Frost Museum. Picking up on current trends in body transformation, the show features a 2013 video of Martiel’s performance Vanishing Point, along with photo-documentation of the performance. On view through February 4. The opening reception runs 4–7 p.m. on Saturday, October 22, and the show runs through February 12. For more info, or to RSVP to the opening, click here.

And in NYC. Martiel is also featured in Enacting Stillness, an international group exhibition that considers the political potential of slowing down and stopping as forms of resistance, protest, and refusal. Next Wednesday, October 19, Martiel will present Maze, a new performance that reflects on mass incarceration and racial discrimination in the United States. The performance takes place 6–8 p.m. that evening. It includes mature content and may not be suitable for children. As a follow-up, Martiel will talk about his work with Clifford Owens in a conversation on Thursday evening, 6–8 p.m. Both events take place at The 8th Floor, where Enacting Stillness runs through January 13. RSVP for Martiel’s performance here.

Valdés in Times Square. Rachel Valdés brings her perceptually driven installation art to New York’s Times Square next week with The Beginning of the End. The work is the latest in a series of collaborations between the Cuban Artists Fund and Times Square Arts, which previously saw installations in the Times Square district by Alexandre Arrechea, Esterio Segura, and Arlés del Río, among others. The Beginning of the End opens with a ceremony at 11 a.m. next Tuesday, October 18, at Broadway Plaza between 46th and 47th Streets, and will remain on view through November 21.

Fernández in Kansas City. Three cultural institutions in Kansas City, Missouri, have teamed up for Cuba Bound: Photographs by Jesse A. Fernández, a retrospective of work by the Cuban-born Fernández (1925–1986). Raised in Spain after his family fled the Machado dictatorship, Fernández went on to live in the US, Cuba, Colombia, and Europe—a background reflected in his cosmopolitan images. The Nelson-Atkins Museum is showcasing Fernández’s portraits of artists; the central library of the Kansas City Public Library is presenting his portraits of writers; and at the Gem Theater, the American Jazz Museum spotlights his portraits of jazz musicians. All three shows run through December 31.

And looking ahead to 2017. For spring, the big news is the March 5 opening of Adiós Utopia: Dreams and Deceptions in Cuban Art Since 1950 at the Museum of Fine Arts, Houston. Conceived by the Cisneros Fontanals Art Foundation and organized by curators Gerardo Mosquera, René Francisco, and Elsa Vega in conjunction with advisors Mari Carmen Ramírez of the MFA Houston and Olga Viso of the Walker Arts Center, the exhibition surveys more than 65 years of Cuban art history. Works are drawn from several major collections, including the Farber Collection, which is lending the Raúl Martínez work that is the show’s signature image. The show’s other partner institution, the Walker Arts Center, will open the show next November.