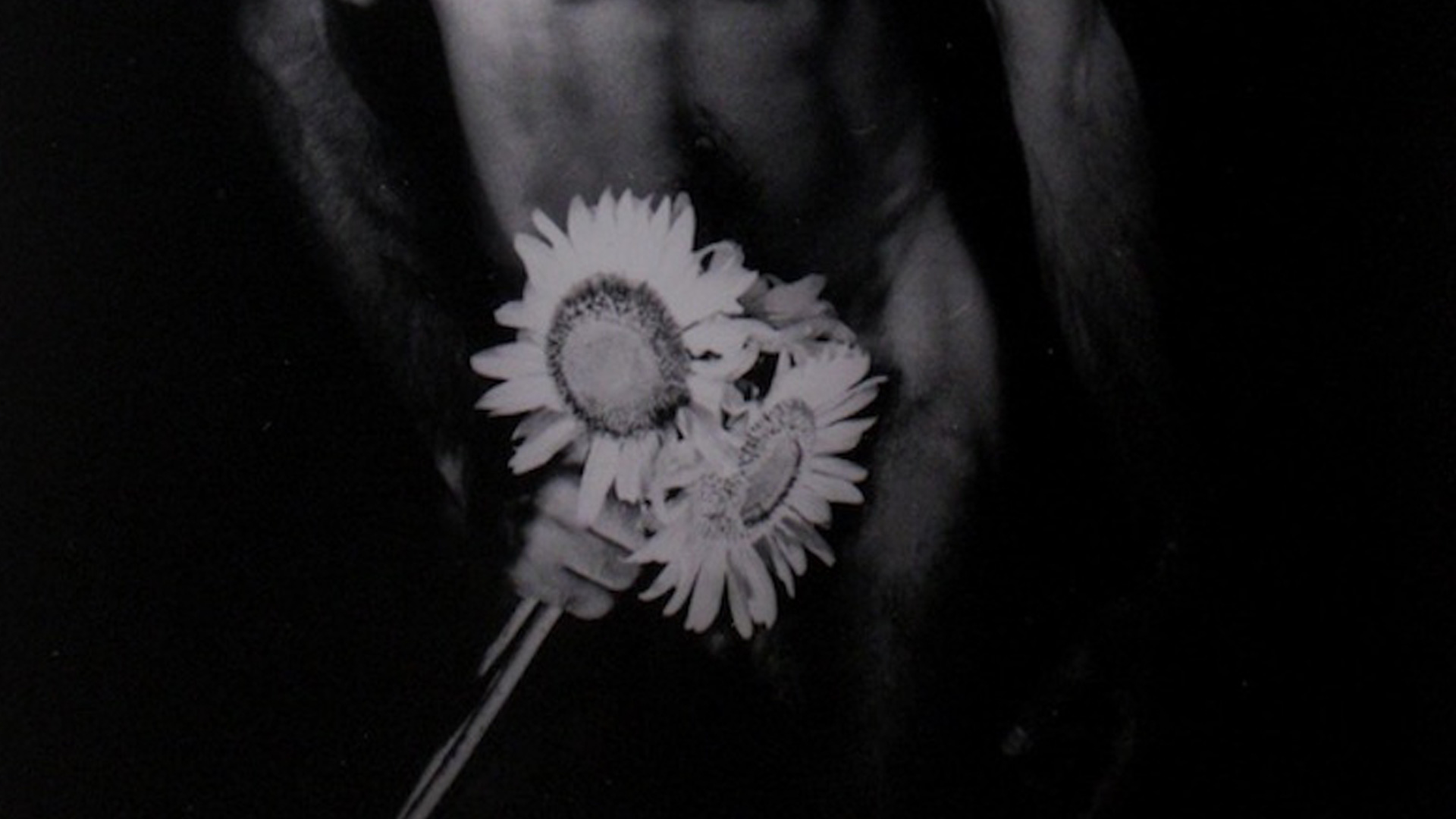 Eduardo Hernandez Santos is the Cuban visual artist who most “assaults” photography. He cuts and mutilates bodies to retool a new physicality according to his desires. He is a creator of Adams, whose beauty offers the viewer a human nature replete with conflicts, while at the same time conveying fragility, desire, and pain.

The influence of Greco-Roman art is evident in his work: man is still the measure of all things. However, this position is enriched with postmodern gestures, from photo-collage to the assemblage of objects that, when fixed to the photo, almost invite the viewer’s touch. As the artist has remarked, the camera is not enough as a medium of self expression.

If I had to define Eduardo Hernandez Santos in a few words, I would say he is a lucid man, whose artistic sensibility keeps him attuned to the reality around him. In Cuba, his series Homo-Ludens(1992) first introduced masculinity in an ambiguous and certainly beautiful way. Since then, his name has been in the forefront of Cuban artists in the field of homoerotic art.

As a student at ISA, you were trained as a painter and printmaker. But you rely on photography as your medium of self-expression. How did you come to make this choice?

The photograph has a power as a document and a record, with an unparalleled seduction for the viewer. That’s why it’s so prominent in contemporary art. If I had made all my images as drawings, they would not have been as powerful. The fact of depicting the nude body in a photo is what makes my work so communicative. Artists have to be very aware of the mediums they use and content value that they have.

When I started doing nude photography, I felt a little strange—my work was so different from the rest. There wasn’t as strong an interest in photography as there is today. Photography became fashionable in contemporary art in the mid-1990s. Now it’s impossible to have an art fair without it. Even artists  who usually work in other mediums use photography to express themselves, because it has such strong power of reflection, and young people today often use it because of its prestige. In Cuba, the responsibility of raising awareness of photography as art was led by the 1990s Generation—not consciously, I think.

You make untraditional use of the photograph—you cut it, stick things on it. Do you still think of your work as photography?

I start with a real photographic act. The interesting thing is that I print it, I embellish it. I have a very direct involvement with the entire process, from choosing who poses to taking the photograph and presenting it. There’s a sort of international mythology that a photograph should not be touched, it should be printed as is, because it will oxidize if you put any adhesive on it… If so, then we’d have to ask how Rauschenberg, Warhol, an many others made an art that was plenty speculative, without thinking about adhesives.

There are still many technical and formal prejudices, not only in Cuba but in the international art world. I ignored all those prejudices to do my work. I’ve pushed the envelope.

In terms of expressing yourself, apparently the camera doesn’t do the job. Why do you feel the need for other means?

Sometimes photography doesn’t feel like enough. I think you need something more to engage in a much wider world, and that is what I have shown in my work. The world of connections, of mixing, techniques, and object-ness that you have in contemporary art.

Sometimes the photograph is left as document, a record, and doesn’t interact with other phenomena. I feel that is missing in some photographers. However, I love hundreds of photographs that stand firmly on their own by dint of their strength, communication, and intelligence. There is an element I try to impart to my work: photography as a representation of the real, more real than reality itself. What interests me is what provokes that combination.

Critical writing about your work often alludes to the influence of Greco-Roman canons. How strongly do you connect to the masculine concept of beauty, or of man as the measure of all things?

There’s what critics say about you, and what you think of yourself, and they can be two different things. There is an influence of classical canons in my work, but not a rigid connection with an extremely traditional way of making art. I move closer to a position of deconstruction, to then construct something different.

Contemporary art offers ample freedom to create within traditional metiers. Why do you conceive your art and images as a starting point for deconstructing what came before?

I have a series, Lo que es, lo que no es, y lo que es no siendo, which demonstrates that strategy in a specific way. It’s a great pastiche, with figures, with buildings in Europe interacting with Cuban buildings, with Dürer`s engravings, elements from magazines, and stuff appropriated from my own photos. We are always so far from Europe, and Western canons, and so close to all of them. You walk El Cerro, la calle Monte, and you realize how many eclecticisms and appropriations in our architecture come from the Greco-Roman past.

I am interested in architecture as a subject. I wanted to make a group of works in  which I could interact with the Corinthian,  Doric, Ionic, and Art Deco styles, which are interpretations of Mesopotamian or Egyptian styles or Egyptian. Havana is a grand pastiche, and I find it a very provocative and interesting city. It’s the city where I was born and live, that I love very much and observe closely. I live in the oldest part. In Lo que es, lo que no es, y lo que es no siendo it’s like we’re both close and far [from European traditions], we’re not the genuine item but we have part of them. It is something that is in the very essence of our nation.

In Lo que es … you build a city where all human figures appear naked, as in most of your work. Does the naked transcend allusion to the physical in your work?

Nudity involves more conceptual or moral elements. It’s not gratuitous, it’s been done with deliberate intention, and most of the elements are fully conceptualized. I’m not a photographer who makes light works. Not all photographers have as much academic training as I have. I’m not only an artist but a teacher, since I graduated from ISA. I think in that sense I am a sort of exception, in addition to my personal interest in research, culture, the past and the present.

Lo que es, lo que no es, y lo que es no siendo seems a hypothetical or possible city, where everyone is naked. So it evokes a space of supreme freedom—human beings without masks, without subterfuge, and without double standards. You can speak freely with the beauty of your body, your identity, in a beautiful city. That naked man also references a past, or a dream where he lived in an atmosphere of greater freedom in the personal, the spiritual, in the origins of the world.

I think our body can be a picture of our soul, it also reflects issues of personality, of intellect, contradictions. It is not a neutral sign. It is full of content.

The works in which you use models always seems well thought out and sensitive. It’s as if you understand the psychology or way of being of every individual you portray. What’s that moment like?

Working with models is very complex. I do not use any image glibly. And I work with the same person for several ideas, so I have a huge archive of human figures at my disposal. I check the negatives or contact sheets and select the best. I can print thirty or forty photographs, and then use the most evocative. I demand a lot of models. I like to meet the person. Sometimes they are close friends, or artists.

What, then, is your position with respect to the limits between erotica and pornography?

It’s a very interesting question. If you look at my work, it is very careful—I don’t think it’s gone out of bounds yet. I must confess that as an artist I’ve wanted, at times, to break that prejudice, that limit. But in the end I think I’m going to let sleeping dogs lie. Perhaps the work won’t be exhibited, or no one will be interested in it. Self-censorship is always exercised in a context you were in before. It’s like a boomerang.

The question of eroticism vs. pornography is a very confusing gray area in contemporary art. I can think of many artists who’ve bombarded it since the 1960s. There has always been an established limit with respect to depicting a direct sex act, or the genitals without some lyrical treatment. If there’s no elaborate metaphor, people begin to question whether it’s pornographic.

Art dares to speak of human aberrations, because its purpose is to question, to freely express all human things. In fact, it has collected lurid aspects of sexuality. In the wider world, that line is blurred. In Cuba, we still stick to it.

Next: Censorship, recent work, and “the conflicts of the homoerotic.”