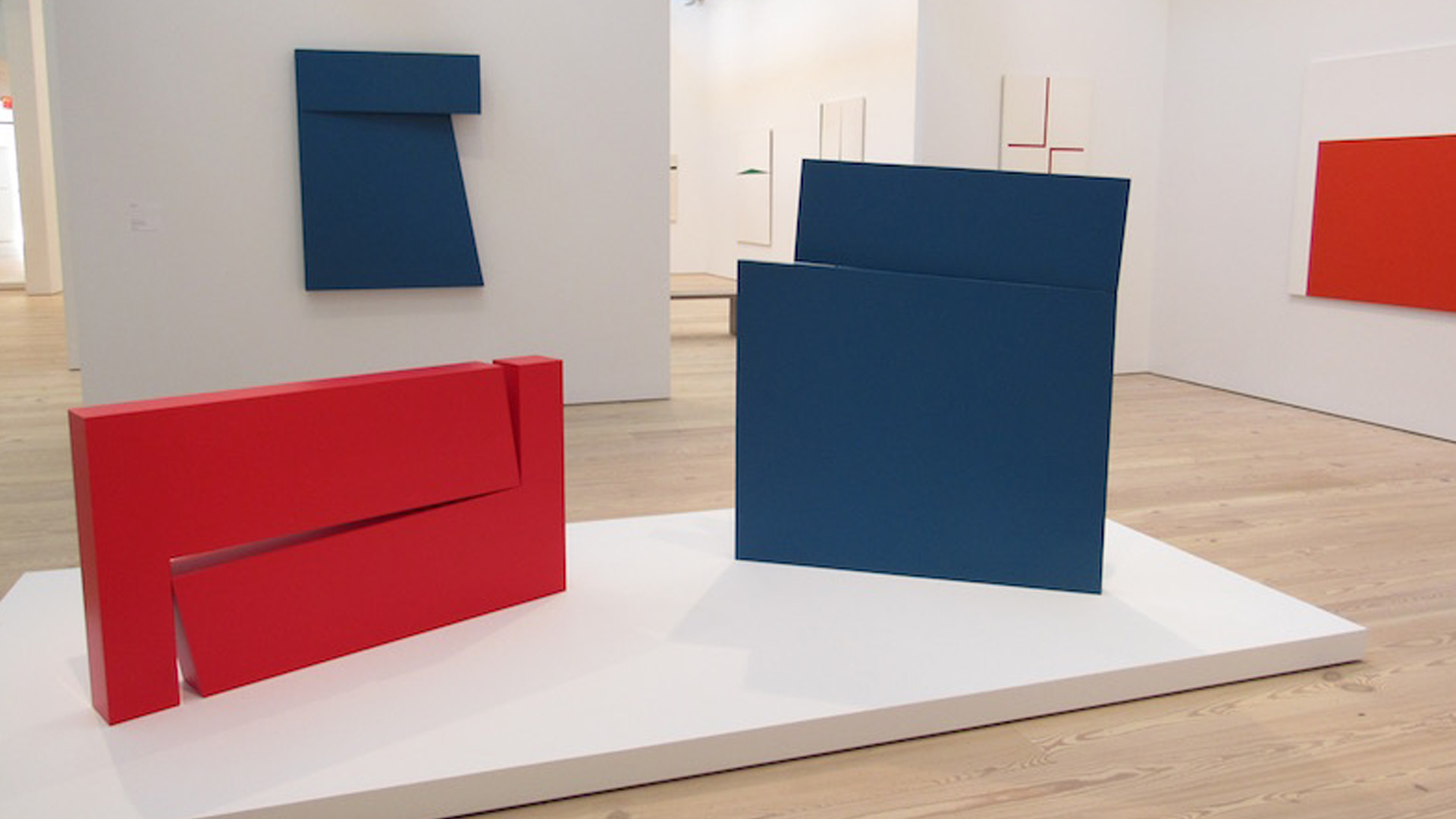 At yesterday’s media preview, Whitney director Adam Weinberg and exhibition curator Dana Miller spoke movingly about Carmen Herrera: Lines of Sight, Herrera’s art, and her place in the art world. Cuban Art News offers an advance look at one of the season’s most highly anticipated exhibitions.

(For more shots of the exhibition, see the album on the Cuban Art News Facebook page. And read our interview with her here.)

Visitors are first greeted by what are, chronologically, the last works in the exhibition: Herrera’s series “Days of the Week,” seven striking canvases arrayed on two walls facing the elevators.

The first gallery addresses Herrera’s formative Paris years, 1948 through 1953 or early 1954. The early paintings, noted Weinberg, “are almost like maps—you’re looking [from the] outside, and then bit by bit you go into the paintings.”

Many of the works in the exhibition are being presented in a museum setting for the first time.

The exhibition’s second gallery addresses Herrera’s work in Paris and New York, tracing the shift to straight-edged forms and two colors. In these years Herrera also began making works composed of multiple panels, and painting the edges of the canvas and the frames—treating the works as three-dimensional objects.

Herrera considers “Blanco y Verde” her most important series, and the exhibition gathered together an unprecedented nine (of a known 15 surviving works), shown together in one gallery.

“Although Herrera is fond of the maxim ‘Less is more,’ when viewing her work I firmly believe that ‘more is more,’” said curator Dana Miller at the media preview.

“Each individual painting is stunning, but it is only when you see several, and you see them in the flesh, that you understand and appreciate the precision and intelligence of each of her decisions: the proportions of color, the subtle inflections of an angle, the way her work reads from various vantage points.”

“I would argue that the appropriate maxim for Carmen is not ‘less is more,’ but ‘more with less’.”

Several of the “Blanco y Verde” works have green-painted edges. Viewed from head-on, one sees fields of white ringed by barely discernible hints of color.

The final gallery features paintings, drawings, and the three-dimensional works that Herrera calls Estructuras, dating from 1962–1978.

“We can see in the Estructuras and the rare drawings of the 1960s that many of her compositions, including her paintings, began with sculptural concepts,” said Miller, “and that her early architectural training was essential to her way of working.”

“When the art history textbooks are rewritten to include Herrera—and I do believe they will be—her first mention should not come in the 21st century,” said Miller, “but rather, when she began to make her pioneering works, in the 1950s, the 1960s, and the 1970s—works she was making when she couldn’t find gallery representation and she was all but ignored by museums. In part, I should say, because of discrimination against her as both a woman and an immigrant.”

“In many ways, she is a woman ahead of her time,” Miller concluded. “She was, and she still is.”

Carmen Herrera: Lines of Sight opens tomorrow, September 16, at the Whitney Museum of American Art in Chelsea, where it runs through January 2. It will be presented at the Wexner Center for the Arts in Columbus, Ohio, February 2–April 16, 2017.

For more shots of the exhibition, see the album on the Cuban Art News Facebook page.