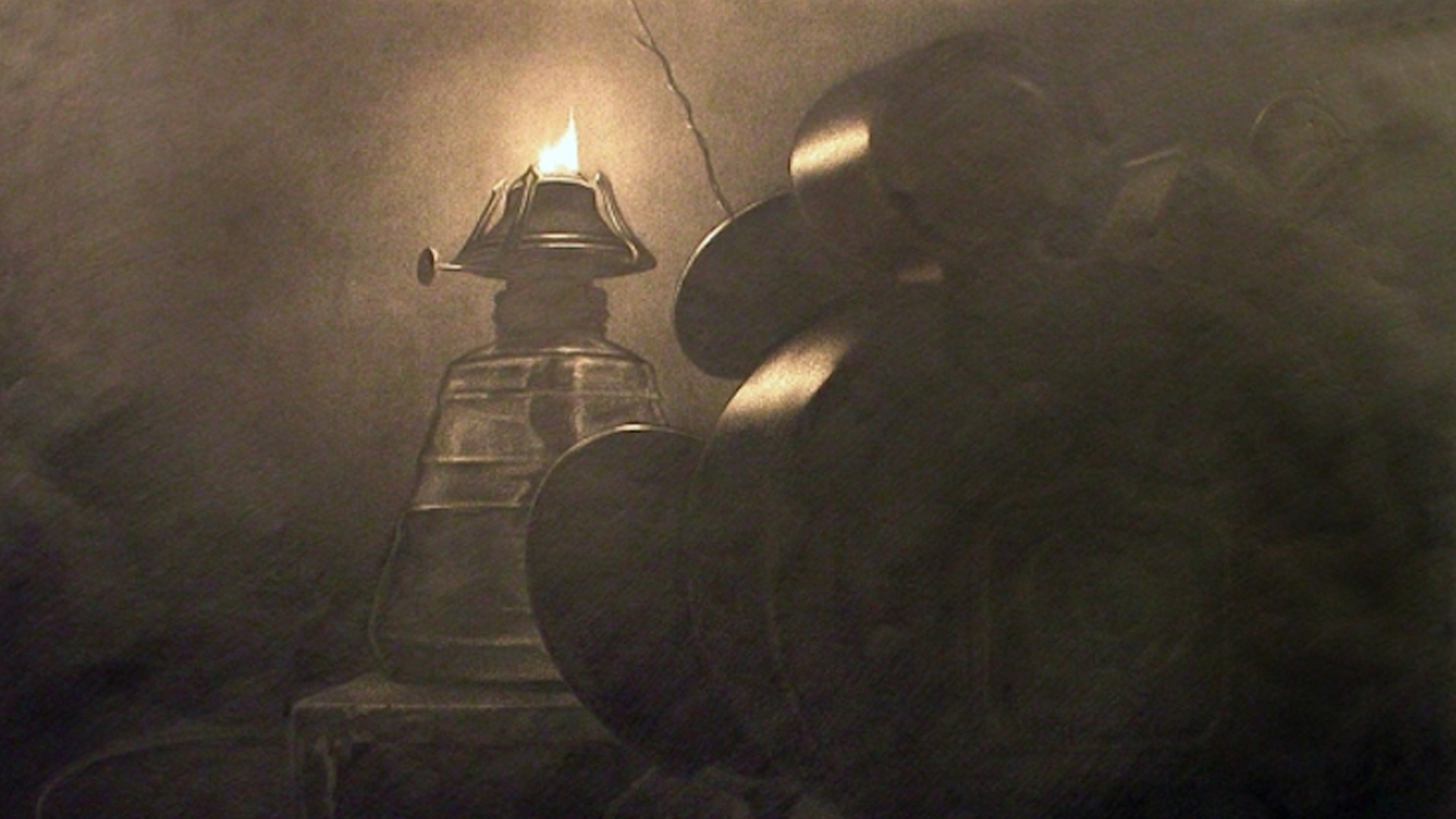 Taking its cue from the symposium “Dialogues in Cuban Art: An exchange between Havana and Miami,” presented at the Pérez Art Museum Miami on April 28 and 29, on April 26 the Cisneros Fontanals Arts Foundation (CIFO) held a panel discussion (in Spanish) on the theme of “La generación de Volumen Uno: La escena del arte producido en Cuba entre 1978 y 1984″ (The Volume OneGeneration: The art scene in Cuba between 1978 and 1984).

Presented at the CIFO Art Space in downtown Miami, the evening’s discussion was the brainchild of CIFO director and chief curator Eugenio Valdés. Accompanying the solo exhibition Tramas by artist Gustavo Pérez Monzón (b. 1956), held in the same space, the discussion was intended to provide historical context for the Dialogues in Cuban Art symposium.

The panelists included Pérez Monzón and artist Rubén Torres Llorca (b. 1957), participants in the mythical Volumen Uno exhibition, as well as critic, art historian, and artist Aldo Menéndez (b. 1948). Also at the table were Elsa Vega Dopico (b. 1970), curator at the Museo Nacional de Bellas Artes in Havana, and artist René Francisco (b. 1960)—both of them curators, with Valdés, of an upcoming exhibition on Cuban art from the 1950s through the 1990s, drawn from the Ella Fontanals-Cisneros Collection.

The main idea behind the event was to bring two generations of Cuban artists into dialogue: to reflect on the time just before and after the Volumen Uno exhibition, and to give a fresh reading and better understanding of this turning point, which paved the way for the 80s Generation in the visual arts of the island.

Aldo Menéndez, in his presentation, was voice of the artists who emerged in the late 1970s. In turn, Torres Llorca spoke on behalf of those artists who followed the changes that Volumen Uno brought to the visual arts scene, while Pérez Monzón shared his personal experiences of his own art practice, linked to his teaching. He talked about the changes he experienced as an artist, from a teenager to creative maturity, his shift to teaching, and his return to painting.

In conversation with the audience, René Francisco updated these developments to the 1990s, referring to the dynamic of the model of arts education as the possible engine for more dynamic changes in the visual arts.

As defined by the event’s organizers, the conversation focused on the era that began with the opening, on July 28, 1978, of the 11th Festival of Youth and Students, through the First Biennial of Havana, inaugurated May–June 1984. By 1978, the years known today as the Quinquenio grís—a time when the most stringent persecutions and prohibitions were put in place with the objective of creating the “hombre nuevo” (“new man”)—had been left behind. It was a peculiar and historically interesting moment, as the effervescence of the early years of the 1959 Revolution had begun to wane and a new society, under rigid parameters of economic and social management, began to solidify.

Menéndez was a key figure in the Cuban visual arts scene from the mid-1960s until 1990, when he emigrated to Spain (and since 1995, Miami). On the island, he served as graphic designer and artistic director for government publications such as the bulletin of the National Council for Culture and the magazine Revolución y cultura. He was a UNEAC official, the founder and director of the René Portocarrero silkscreen workshop, and a member of the organizing committee for the First Havana Biennial, among other roles. As a painter, in the early 1970s he was part of the short-lived photorealist movement in Cuba.

During his presentation, Menéndez distributed a document that he himself created and printed, listing “achievements of Cuban art during the so-called Gray Period [Quinquenio grís], which demonstrate—contrary to expectation—the quality of the artistic production of that period, including its nonconformity to official cultural policy.” In his peculiar form of “debate,” validating history from his own perspective and through his own role in the events, Menéndez nevertheless spelled out the “achievements” of artists before Volumen Uno, without negating the later artists’ revolutionizing vision of art in Cuba.

For his part, Torres Llorca—a member of the then-very-new 11 artists who, on January 14, 1981, exhibited their work at the International Art Center and unintentionally upended the traditional understanding of art in Cuba—vehemently opposed Menéndez´s position, stating in no uncertain terms that Volumen Uno was not only the only revolutionary artistic position at that time, but the only way of making art with a fresh and re-energizing aesthetic.

It is indisputable that, from the perspective of historiography, Volumen Uno is comparable in its impact to the Exposición de Arte Nuevo sponsored by the Revista de Avance in 1927, and Once Pintores y Escultores presented in April, 1953, which gave rise to Los Once—another group of 11 young people opposed to the established art.

While Volumen Uno did not overtly manifest any theoretical breaks with the modernity that had been promulgated by cultural directives, it did open the doors to a creativity freed from the much-vaunted national identity that had been the overarching goal of artistic expression. The works on view were responses of young Cuban artists to the currents of international art at the time—fresh artistic production that didn’t pursue any ideological, socioeconomic, or political position.

As an approach to rethinking the period in question, the CIFO panel failed to create a true space for discussion—one that would stimulate a dialogue among the speakers themselves or with the audience. In general, the speakers stuck to their own points without being able to exchange any significant ideas.

But in the conversation there was room for memories, anecdotes and nostalgia. Anecdotes like where the name or the legendary exhibition came from: an idea, originally proposed by Gory—even then, a great fan of rock and roll—as a reference to the Led Zeppelin album, Volume I.

In response to a question from the audience, René Francisco, as a spectator and participant in that historical moment, talked about his memories of how students’ ideology was controlled at ISA (Instituto Superio de Artes). He also highlighted Flavio Garciandía role as an exceptional artist and teacher, who advocated for teaching art without dogmas or political nuance. One cannot disregard, as well, the high caliber of education, both theoretical and practical, at ISA in general at the time, by frontline artists and teachers such as Consuelo Castañeda.

Certain artists were notably missing from the audience: pillars of the post-Volumen Uno era like Castañeda and Arturo Cuenca, as well as José Bedia, to name a few. Also absent were those who, like Aldo Menéndez, helped define the art scene before 1981. But without question the memory was marked, the seed planted, and the discussion opened.

The most interesting comment came from a member of the Jorge Pérez Collection’s curatorial team, who pointed out that, while the 80s Generation is coming back into the public eye, this phenomenon turns its back on Miami, where most of these artists live. She pointed to Pérez Monzón, who is exhibiting at CIFO and had exhibited earlier at the Museo Nacional de Bellas Artes in Havana—and, like Carlos García de la Nuez, lives in Mexico City, not South Florida.

A question hung in the air: What possibilities in Cuba have opened to those Miami-based artists? Since the panel took place in April, it has been announced that Glexis Novoa—who lives in Miami and recently opened studio in Havana—will soon have a solo exhibition at the Museo Nacional there.

Undoubtedly, the full auditorium was luxury, as it’s rare to see such a large number of Cuban artists from different generations, now living in distant places like Amsterdam, Mexico City, New York or Havana, gathered together. The event’s success is unquestionably an indication of the latest political changes—under other circumstances, such a concentration of artists in Miami would have been unthinkable.

Colleagues who had not seen each other in more than two decades met face to face again, among them the members of the Puré group: Ana Albertina Delgado, Adriano Buergo, Ciro Quintana, and Lázaro Saavedra. Only Ermy Taño was not there.

“La generación de Volumen Uno: La escena del arte producido en Cuba entre 1978 y 1984” was a significant event, despite the relative lack of real dialogue. It was without question a democratic exercise, and an intelligent attempt to stimulate conversation on all sides and from all parties, a capacity that Cubans seem to have lost these days. For many, it was an invitation to revisit the achievements and contributions of the 80s artists, that “lost generation” who were denied visibility after near-massive emigration.

The event was a welcome act of memory—its recovery, preservation, and enrichment—with no agenda other than clarifying the history of art in Cuba.