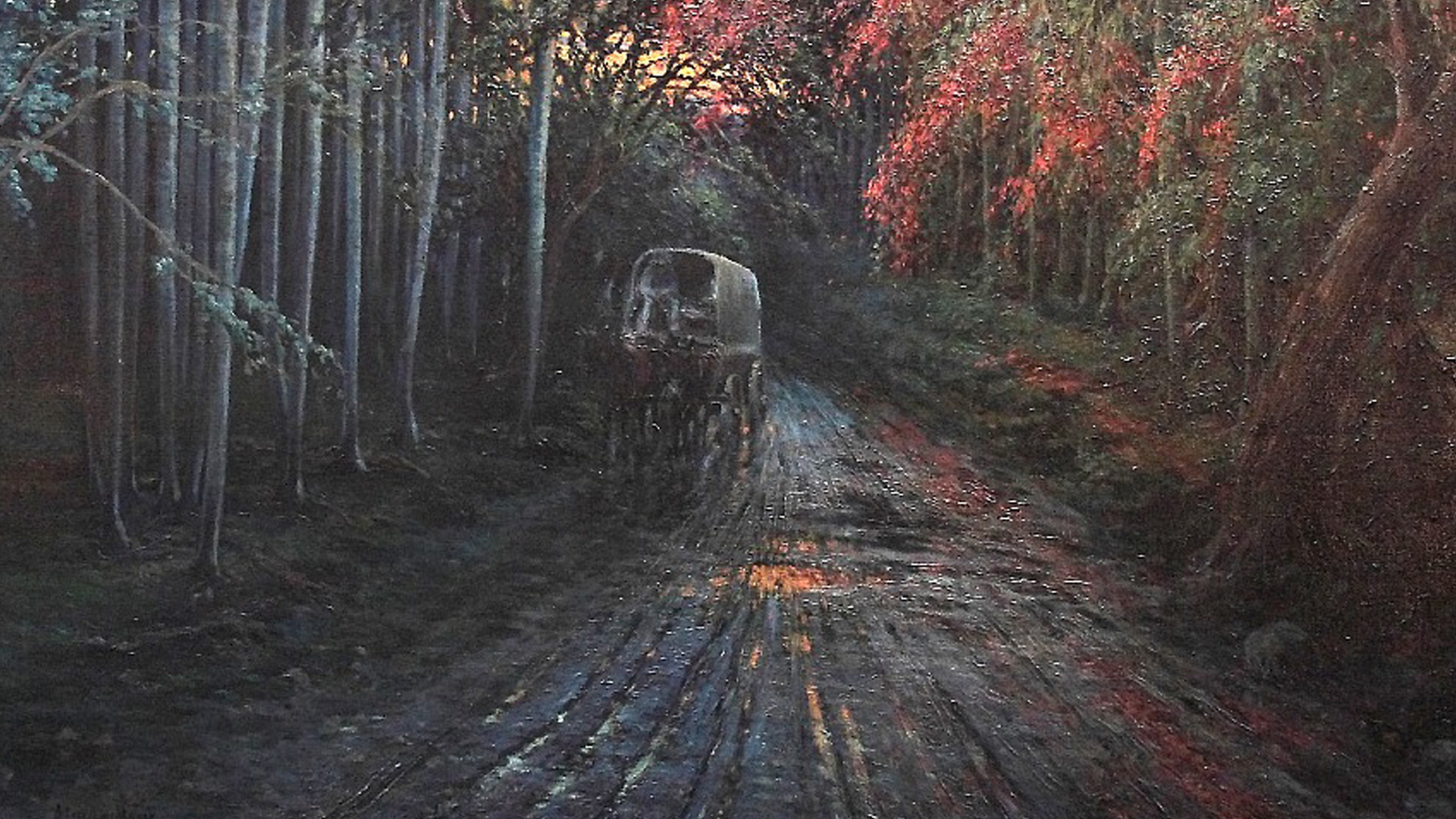 Although the current art scene is a major focus for Cuban Art News, we also like to look back at earlier artists and eras—especially for readers beyond the island who may not be that familiar with Cuban art history. We are pleased to share another essay by MSc. Delia Ma. López Campistrous, curator at the Museo Nacional de Bellas Artes—this one on the early 20th-century artist Antonio Rodríguez Morey.

In the late 19th century, the field of art witnesses the swan song of styles and the birth of a polyphony of “isms.” Movements—not necessarily successive, but rather parallel, and sometimes intermingled-—announced anti-academic positions with profound spiritual and mystical sensitivity. The man born in the century of scientific advances no longer believes in social evolution. The deep spiritual and physical poverty in which much of the population lives, a result of rapid technical development, prompts a search for new archetypes.

The ways of art modernization are not always through avant-garde positions, formal breaks, or technical audacity. Even the implicit technicality in impressionist works arouses suspicion of some turn-of-the-century tendencies, at times considered as new ties to a different mode of scientific scholarship. The tangled skein of turn-of-the-century aesthetics is terribly eclectic, and in its fuzzy contours are found the outlines of our own art, in the early days of the Republic.

Antonio Rodríguez Morey (Cádiz, Spain, 1872–Havana, 1967) was educated in the art schools of Cuba and various academies and workshops in Italy. He lived, as few of his contemporaries did, that turn-of-the-century struggle between novelty and beauty. Active on the art scene as the director of the National Museum of Cuba, he was also founder of prestigious institutions during the Republic, a professor at the Academy of San Alejandro, an illustrator and art director for major magazines of his time, and a multi-award-winning artist for his pictorial and cultural work.

Beyond the rigorous discourse of academia, Morey´s persistence as a writer in the Republican press speaks to us of his inclinations and influences. We are talking about a man who respects tradition and history as reservoirs of culture, and can talk about the Cemetery of Pisa or the Florence Galleria of the Academy or the temples of the Muses; an artist able to make a case for art history and, in the end, make his aesthetic choices as a child of his time.

Rodriguez Morey himself was considered a late Romantic. We are not wrong in considering him our most authentic symbolist—or idealist, which was the most widely used term in Cuba for this movement. Like many, he could not disengage from the lyrical-decorative tendency which is embodied in feminine beauty as the pinnacle of ideal beauty and the virginal nature of the human species. There is no direct content from known myths: his thoughtful and serene girls seem to gestate reflexively each rose, each little daisy that brightens the grass, and the butterflies that flutter through the dense forest.

Despite his admiration for the work of Franz von Stuck, Morey´s graceful, red-haired nymphs are recognized as modest nudes that the German´s femme fatale might envy—flesh that arouses only the supreme desire of Beauty. Their step makes Spring come alive, their music awakens sleeping spirits. A mist of wings, a light filled with pollen, veils that conceal and reveal.

This is the same artist who thinks of battles not as history painting but as plastic values that recreate the perfection of the naked body, as a pictorial motif that dates back to the Greek metope. He is a late Romantic, an idealist, as he himself says, a man who seeks absolute beauty outside his own time. Classic beauty, delicate and precious coloring, an aura of unreality or of dreaming reality, spurred on by the pure love of art.

There was no one more Cuban than this artist born in Spain. Morey got his naturalization papers in 1910, but on many occasions he omitted from his biography the fact that he was not born on the island. A quirk of fate, his life begins when his parents emigrate to Cuba in 1877. And it is the beloved naturaleza of Cuba that will give his work its definitive maturity.

From his early youth, the landscape exercises a strong appeal for Morey. Taught by Valentín Sanz Carta and Miguel Arias, these first teachers are always present in his palette. Even when the motif is an urban setting, the scenographic concept will gravitate to the idea that the truth of art is reality itself. He worked with the night, with artificial lighting and the reflected lights on a rainy pavement, but he could never say, as Casal did, “I have the impure love of the cities …”. His love of twilight is love of the countryside, his mystical muse is the palm tree.

This artist´s most accomplished landscapes show found diagonals: a ravine in the Italian countryside, the sad village that sees two youngsters saying goodbye to their parents, the rough shepherds playing their flutes to the delight of fabulous nymphs, or a Cuban forest and rivulet. The pyramidal composition in opposing areas allows a piece of sky to penetrate the horizon. A happy union of earth and paradise: the leaden day and the April light seem pieces torn from a canvas by Tintoretto—admiration for the Renaissance, incorporated into the aesthetic repertoire of symbolism and reinterpreted in a pictorial subjectivism that Morey was able to transfer to landscape.

Rodriguez Morey is considered the painter of wet landscapes. Domingo Ramos used the phrase “works of ideas and feelings” to describe the artist’s approach to nature charged with foreboding. Morey´s atmosphere describes bucolic sentiments, but it’s a metaphor for uneasy states of profound lyricism, rather than sadness or longing.

So he chooses that time at the edge of night, those topographic cuts and accidents, the atmospheric event that will sweep the dust of the road with rain, which will cleanse the night.

But the palm tree—that slender-waisted constant of the Cuban landscape, always seeking the heights—will define the vertical note of the countryside. In the pink-orange of the afternoon, in the crucible of a sunrise reflected in a pond or river, the palm rises above the poinciana tree, above the hut, above the farmer and his cattle, above the coach. The human presence is dwarfed by the royal palm. Landscape reaches its most critical symbolism in the palm.

The turn of the century did not bring an unequivocal response to artistic languages; rather it delighted in the dissimilar aesthetic tendencies that coexisted in this transitional period, which in Europe is considered to be between 1880 and 1920. But its actual duration for Cuban art is yet to be determined.

During his studies abroad, the artist from the new world often regarded the panorama of the European scene as a buyer handed a catalogue from which to choose without obligation. Fin-de siècle art was devoid of strict ties that bound it to pre-established artistic languages, and this modernization process took hold and modified the artist’s discoveries on the old continent. As with a collection, the whole reached a magnitude greater than the sum of its parts.

Within this stained-glass window of influences, dismantled and reassembled in the Americas, Spanish Impressionism played a cohesive role. The Valencian painter Joaquín Sorolla (1863­­–1923), with his successes in the salons of Madrid and the galleries of North America, became the canonical ideal of the time, where the circulation of art reached greater autonomy over academic competitions.

Sorolla triumphed in the collections, in a way that was not unknown to Rodríguez Morey, who in the 1920s managed—not without difficulty—to get an increase in the state budget for the collections of the National Museum, which led to the acquisition of one of the first paintings by Sorolla in Havana.

Cuba, an island bathed in torrid waters, was no stranger to luminism. Still, in 1943, Guy Pérez-Cisneros stated: “certain tendencies in contemporary painting are related to the tastes of wealthy Cuban classes early in the Republic; they purchased Spanish works—academic, impressionist, and especially, Sorolla.”

There have always been imitators. However, Sorolla´s footprint in this group of fin-de-siècle artists, such as Rodríguez Morey, should be considered from the perspective of the vernacular, which seeks to delineate its own art from formal tendencies, clinging to themes such as landscape, which has a note of undeniable identity, while also trying to meet the cosmopolitan tastes of a market that looks for new “isms.”

Morey´s luminist works had their own poetry and were restricted to intimate small-format works, where formal freedom became a divertimento. In the work of Morey and many of his contemporaries, it’s not the juxtaposed brushstrokes that identify the technique, but the interest in light, the reflections of the sun in the leaves and on the beaches.

The transparency of the atmosphere is reminiscent of the realism of Valentín Sanz, the teacher whose influence never left Morey. The loose stroke that plays with a range from monochrome to complementary colors, seeks to convey the sensitive emotion, the subjective or dreamlike sense of the scene, this romantic symbolism that Morey brings to the Cuban landscape.

Choosing milestones in an artistic career yields more questions than answers. The Antonio Rodríguez Morey that we see in his pictures, one and diverse, was a multifaceted seeker of beauty who retained, until his last breath, his love of the culture of his homeland.

This is a quick glance at pictorial production in the period between centuries; a real study would go more in depth. Meanwhile, we can assert that Antonio Rodríguez Morey was a Cuban painter who, by historical error, was born in Spain—an error that he corrected with his art.