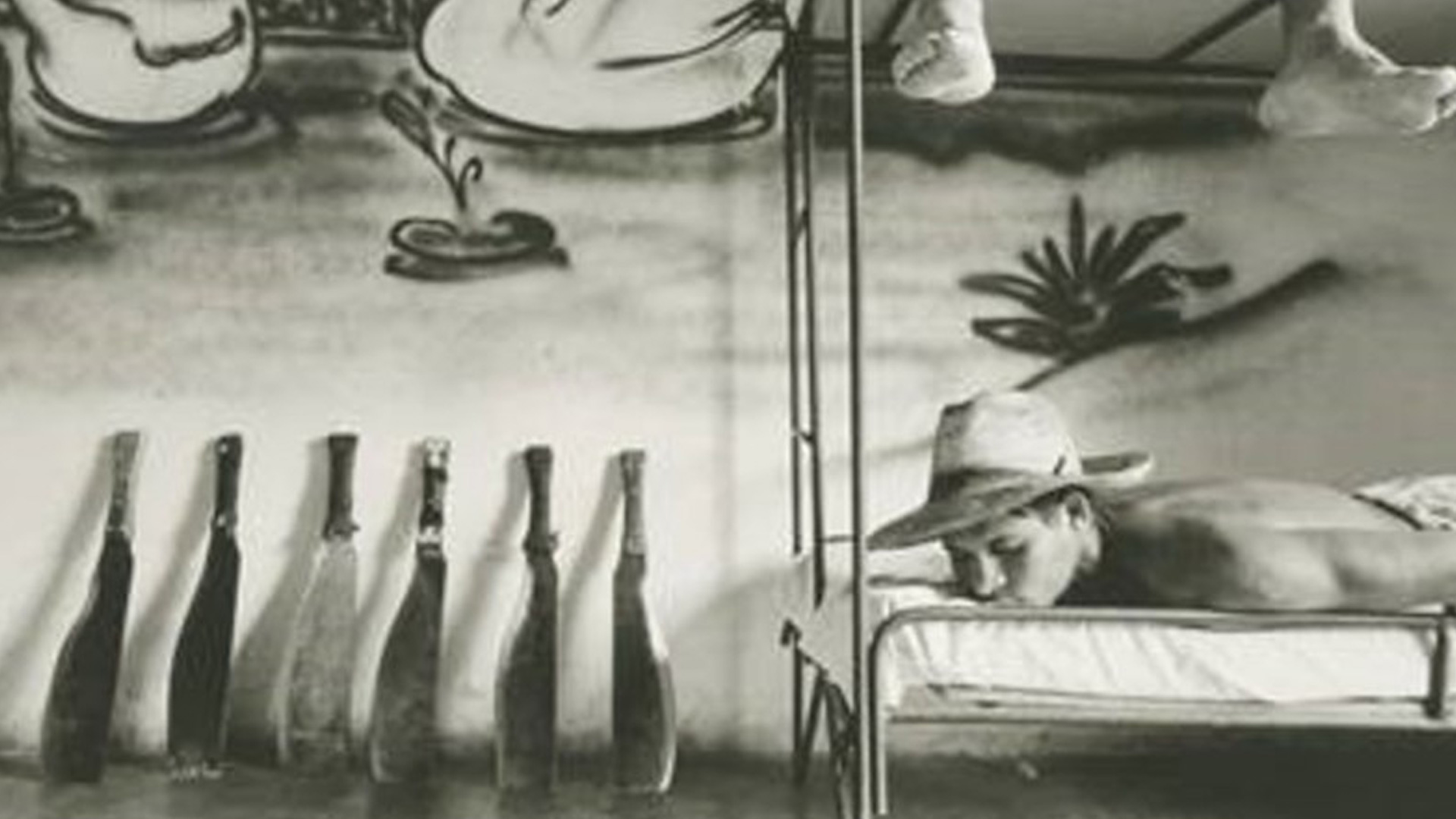 González-Torres in Milan—and New York and London. All three of this summer’s Félix González-Torres exhibitions, mentioned in an Update earlier this season, are now on view. Marking the 20th anniversary of the artist’s death, the three exhibitions were curated by artists Roni Horn and Julie Ault, who worked with González-Torres in the collective Group Material. The first show opened at Andrea Rosen Gallery in Chelsea, where it runs through this Saturday, June 18. The second, at Massimo de Carlo Gallery in Milan, runs through July 20, and the third, at Hauser & Wirth in London, runs through July 30.

Hernández in Germany. With Theoretical Beach, his solo show at the Museum Morsbroich in Leverkusen, Diango Hernández turns several rooms of this Baroque castle into a metaphorical exploration of sea and shore—the place where liquid movement meets solid ground, and where human values shape cultural, social, and political systems. The beach also evokes Cuba, both as a real country and an imagined tropical utopia. Featuring sculpture, installations, paintings, and extensive wall art, Theoretical Beach runs through August 28.

Saturday: Larraz in Venice. Opening this coming Saturday, June 18, Ommagio a / An Homage to Julio Larraz showcases new and recent paintings by the artist. The show runs through October 23 at Contini Galleria d’Arte. Next Saturday’s reception begins at 6:30 p.m.

Save the Date #1: Tatuare la storia in Milan. Opening July 4 at the Padiglione d’Arte Contemporanea (PAC Milano), Cuba.Tatuare la storia (Tattooing History) is an ambitious, cross-generational survey of Cuban art from the 1970s to the present. Featuring some 30 artists and groups—from Tonel to Tania Bruguera, Glexis Novoa to Celia-Yunior—the show emphasizes the performative dimension of Cuban contemporary art with performances by Susana Pilar Delahante Matienzo, Carlos Martiel, and Grethel Rasúa scheduled for July 5–19.

The exhibition also features a special section on Lázaro Saavedra, the 2014 winner of Cuba’s Premio Nacional de Artes Plásticas, and tributes to Ana Mendieta and Félix González-Torres. The show will extend into the Museum of Cultures in Milan (MUDEC), where Eduardo Ponjuán, winner of the 2013 Premio Nacional, will present a site-specfic installation. Curated by Diego Sileo and Giacomo Zaza in collaboration with Jorge Fernández Torres, Cuba: Tatuare la storia runs through September 12. The press preview and opening will take place on July 4.

Saturday: Videos in Miami. As part of its “Summer of Women” programming, this Saturday the Frost Art Museum at FIU unveils Resonance/Dissonance: Video Works by Women Artists from the de la Cruz Collection. The international selection includes works by two Cuban artists, Quisqueya Henríquez and Beatriz Monteavaro. Running through September 25, the show opens this Saturday, June 18, with a reception from 4 to 7 p.m.

Drapetomanía in Chicago. Drapetomanía: Grupo Antillano and the Art of Afro-Cuba, the long-running, widely traveled exhibition curated by Alejandro de la Fuente, has opened at its latest venue: the DuSable Museum of African American History on Chicago’s South Side. The show will be on view there through October 16.

Campos-Pons in Birmingham. At the Abroms-Engel Institute for the Visual Arts (AEIVA) at the University of Alabama, Birmingham, María Magdalena Campos-Pons: Picturing/Performing the Self explores themes of cultural identity, sexuality, and gender. Presenting large-format Polaroid photographic works, videos, and mixed-media installation works, the show runs through August 20.

Capote in North Carolina. Open Mind (Barricades), the 2014 public art sculpture by Yoan Capote that debuted at Nuit blanche in Toronto, has found a new home: the North Carolina Museum of Art’s 164-acre Museum Park in Raleigh. Installed last week, the walk-through installation—made from raised crowd-control barriers, configured to resemble a brain—is the first work to be funded by the museum’s Art in the Environment Fund.

Save the Date #2: Valdés at SITE Santa Fe. Juana Valdés is among the two dozen-plus artists selected to be part of Much Wider Than a Line, the principal exhibition for its biennial, SITElines.2016. The biennial opens July 16 and runs through January 8, 2017.

Thursday in NYC: Cuban photography in Midtown. The 42 vintage photographic images in Under the Cuban Sun: Iconic photographs from 1933 to 2007 trace the island’s political and social upheavals through much of the 20th century and beyond. Cuban artists in the international selection range from Liborio Noval, Alberto Korda, and Leo Matiz to Juan Carlos Alom, Raúl Cañíbano, and José Antonio Carrera. The show opens this Thursday, June 16, with a 6 p.m. reception at Throckmorton Fine Art. The show runs through September 17.

Saturday in Connecticut: Cuba@WAA. This group show at the Washington Art Association & Gallery, in the town of Washington Depot, features work by Aimée Garcia, Rachel Valdés, Cirenaica Moreira, Abel Barroso, and other artists. Curated by Rafael DiazCasas, the show opens this Saturday, June 18 with a 5–6 p.m. reception, and runs through July 16.

Bronx Museum redesign. The Bronx Museum of the Arts, a leading exponent of Cuban and Latin American art in New York, has announced plans for an architectural renovation. The new plans provide more space for exhibitions and public programs. Venezuelan-American architect Mónica Ponce de León, dean of the school of architecture at Princeton University, has been chosen to design the first phase of the project, a re-envisioning of the museum’s south wing atrium. Costs for the entire redesign are estimated at $25 million, including $10 million for an endowment to support education and public programs.

And later this month: Septeto Santiaguero. New Yorkers can celebrate the continuing thaw in Cuba-US relations with the US debut of Septeto Santiaguero at Lincoln Center. The event is part of Midsummer Night Swing 2016, the annual open-air music-and-dance series in Lincoln Center’s Damrosch Park. The evening kicks off with a dance lesson by Carlos Mateu at 6:30, followed by the Septeto’s performance at 7:30. Tuesday, June 28. Ticket information here.

And Buena Fe. The popular music group is headed to the US for a late June-early July tour. According to an article in Prensa Latina, the concerts will promote Soy, an album of Buena Fe hits created for the international market, which was produced in conjunction with Guatemalan singer Ricardo Arjona and his company, Metamorfosis. Stops include Miami on June 25; San Juan on June 30; New York on July 1; Houston on July 2; and Tampa on July 3.

For your reading pleasure. The current issue of Ocula magazine has an interview (in English) with Zilia Sánchez, one of the three artists spotlighted in Diálogos constructivistas en la vanguardia cubana,the show currently on view at Galerie Lelong in Chelsea. Find it online here.

And in The Art Newspaper… David D’Arcy offers a thoughtful look at the issues surrounding the postponement of the Bronx Museum of Art’s show of works from the Museo Nacional de Bellas Artes—with a closing comment from Cuban Art News publisher Howard Farber. Online here.

Farbers in Artnet News Top 100. Congratulations to our publishers Howard and Patricia Farber, named to “The World’s Top 100 Art Collectors for 2016” in Artnet News. The entry (at #28) notes that “In 2010, the Farbers made an important commitment to Cuban art and culture through the creation of the Farber Foundation and the launch of the website Cuban Art News.”

“In 2015,” the entry continues, “the collectors founded the first Cuban Art Awards in association with the Havana Biennial, which presented a $10,000 prize to the “Artist of the year” (the ex-Carpintero Alex Arrechea) and $3,000 to the “Young Artist of the Year” (Celia & Yunior)—six months before President Obama initiated the normalization of relations between the US and the island nation.”

See Part 1 of the full list, including the Farbers’ entry, here.