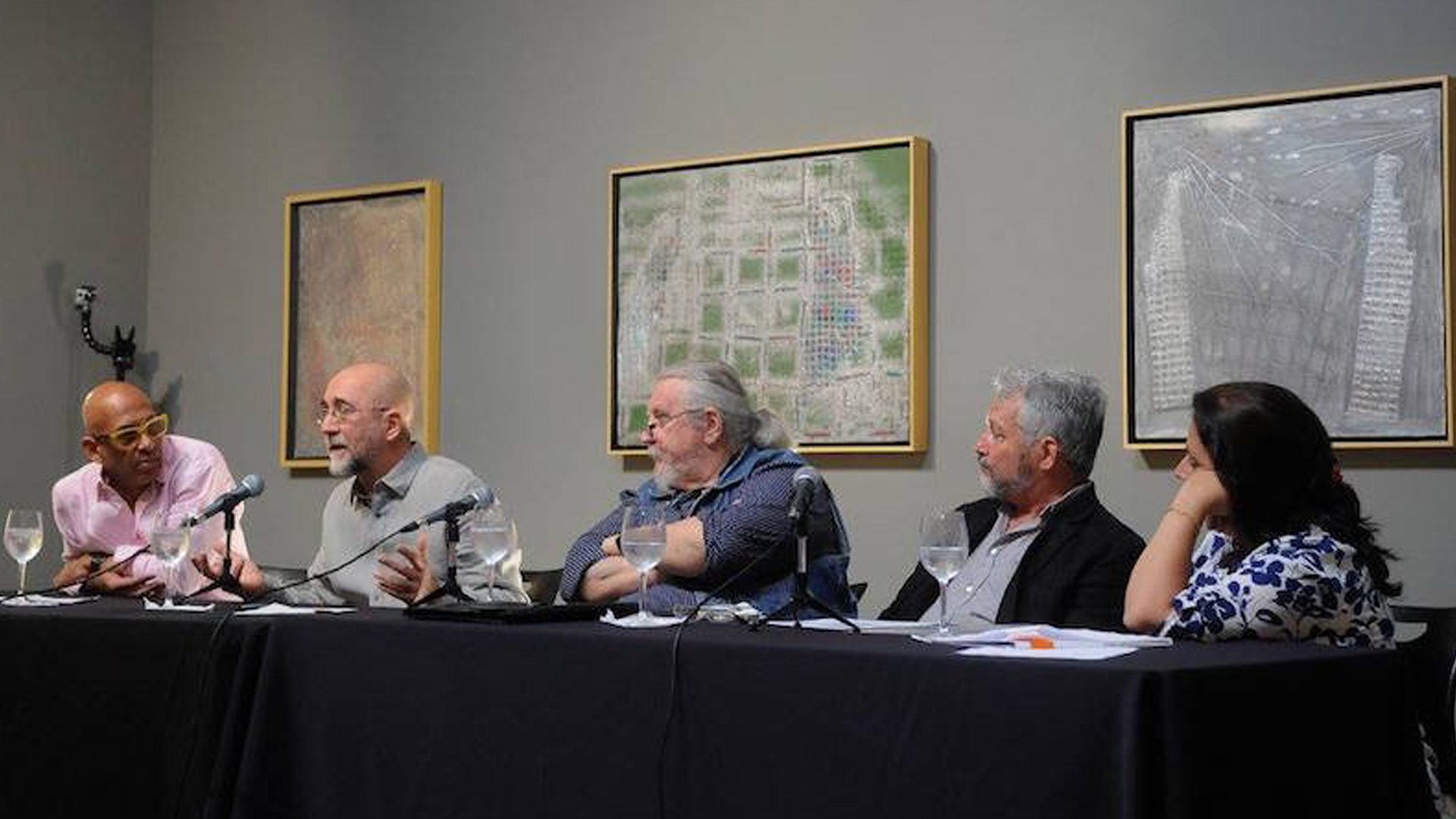 In Part 1 of our report on “Dialogues in Cuban Art: An Artist Exchange Program between Havana and Miami,” Janet Batet focused on the panel outlining the history of Cuban art in Miami. Here, she turns to the heart of the symposium: the panels featuring artists and curators from both sides of the Florida Strait.

The panel addressing the history of Cuban art in Miami was comprised of gallery owners, art dealers, and collectors. In a sort of visual metaphor, the images they used in their presentations incorporated—surreptitiously, like a magnificent underground river—a group of artists who have been a cornerstone of both Cuban contemporary art and the development of the South Florida art scene. However, they were not part of the two-day symposium Dialogues in Cuban Art.

Dialogues in Cuban Art is a more-than-welcome effort that paves the way for the continuation of an essential dialogue among all the interacting factors of that wonderful and rugged adventure that is contemporary Cuban art—whose mission is to overcome barriers that have stigmatized the definition of contemporary Cuban art for decades.  Dialogues in Cuban Art suffers from this absence, which was perhaps accidentally inherited from a biased approach to Cuban art both inside and outside the island.

Reviewing the list of artists invited to the symposium, broadly speaking three main groups can be ascertained: Cuba-born and -trained artists who live and produce on the island (including Lázaro Saavedra, Sandra Ceballos, Ernesto Leal, and Yornel Martínez); Cuban-American artists who were born or raised in Cuba but whose professional training and work are produced off the island (including Emilio Pérez, Leyden Rodríguez-Casanova, Bert Rodríguez, and Manny Prieres); and finally, a newer category, emerging in the Cuban art scenario in the new millennium, which is rightly classified by Dialogues in Cuban Art organizer Elizabeth Cerejido as “transnational,” and applies to artists who live and produce on both sides of the Straits of Florida (as in the case of Sandra Ramos, Alexandre Arrechea and more recently, Glexis Novoa).

However, there is a vital and unavoidable group in the history of contemporary Cuban art that has been once again omitted in this dialogue. I mean that group of Cuban artists who, having been educated in Cuba and being a crucial part of the so-called Movement of New Cuban Art, were not joined to this dialogue—reiterating once again the tendentious omission that has affected so many of the artists in this group. Most of them live in the United States, and many of them specifically in Miami. To mention some inescapable names:

During the first panel, my query from the audience, directed to Elizabeth Cerejido as moderator, highlighted this this omission. Elizabeth explained that the group was an important part of those discussions and that the CIFO conversation earlier that week had tried to give a public forum for that generation. She also explained that the visiting Cuban artists and curators made studio visits to these artists, noting that most of them preferred an “intimate setting,” and adding that this “marks a hesitation by both parties in terms of how they wanted to be included in these conversations.”

Under the title “The generation of Volume One: The scene of the production of Cuban art during 1978-1984,” CIFO Art Space hosted a discussion in the context of its current exhibition, Gustavo Pérez Monzón: Tramas. Focused on different narratives of the moment, the discussion panel was attended by Aldo Menendez, Gustavo Pérez Monzón, Rubén Torres Llorca, René Francisco Rodriguez, and Elsa Vega.

The artists of this generation included in the Dialogues in Cuban Art itinerary are Ana Albertina Delgado, Adriano Buergo, José Bedia, and Rubén Torres Llorca (as part of the meeting / gathering at Blue Door Fine Art). Also included: a visit to Rubén Torres Llorca´s studio, a guided tour of Panamerican Art Projects with artist Gustavo Acosta, and the event at CIFO.

Cuban art from an institutional perspective … and not.

The panel discussion dedicated to Cuban institutions was moderated by Eugenio Valdés Figueroa, director of the CIFO Foundation, and composed of Aylet Ojeda (curator at the Museo Nacional de Bellas Artes); Ibis Hernández (curator of the Wifredo Lam Center and a member the Havana Biennale curatorial team); Onedys Calvo (curator of Factoría Habana); Nahela Hechavarría (contemporary art curator at La Casa de las Américas); and Sandra Ceballos, (founder and director of Espacio Aglutinador). The panel summarized the work of Cuban institutions in the promotion and systematization of contemporary Cuban art.

Ibis Hernández briefed the audience on the efforts and central role of the Wifredo Lam Center and the Havana Biennial in changing the correlation of forces within the traditional biennial scenario, to increase the recognition of art previously considered peripheral—and within that, Cuban art. Nahela Hechevarría spoke about a significant milestone: the Casa de Las Americas’ 1995 presentation of Ernesto Pujol´s exhibition, Los hijos de Pedro Pan, presented in memoriam to Ana Mendieta. Aylet Ojeda´s presentation reviewed the contemporary art collection in the Museo Nacional de Bellas Artes, and its efforts to appropriate and adapt additional museum space for contemporary Cuban art, as a means of increasing its exposure and acknowledging its importance.

In laying out the reasons that Espacio Aglutinador came into being, Sandra Ceballos´ refreshing and wise presentation showed the institutional immobility experienced in Cuba since the late 1980s. This was essential in understanding the emergence of such a space, and the mass exodus of Cuban artists in the late 1980s and early 1990s. Ceballos said:

You cannot talk about Espacio Aglutinador and doing so would not be wise, if I did not go a little further back into the late 1980s, when censorship in Cuba was very intractable, and the Castillode la Fuerza project was closed. This was an event in which many artists participated—some of whom are here today. I also had a solo show there. That project was closed, and Project G was also immediately suspended, very dramatically. This project was organized by three people, two of them artists—Juan-Si Gonzalez,  Crespo, and Eliseo Valdés. In this case, when Project G was suspended, those artists—Juan-Si and Crespo—were imprisoned.

Later, in 1990, the Center for the Development of the Visual Arts (CDAV) hosted the group exhibition El Objeto Esculturado. Artist Angel Delgado presented a performance that cost him six months in jail. This was joined by the suspension of Ezequiel Suárez´ exhibition, Frente Bauhaus, at the 12 y 23 Gallery. With curator Orlando Hernández, a group of artists got together and decided that it was very necessary to have a space of tolerance in Havana, where artists could create, interact, and add a little variation to the Cuban cultural arena, where it was always the same artists exhibiting in the galleries.

Espacio Aglutinador soon became a vital element of oxygenation, presenting exhibitions, talks, and meetings with critics.  The crucial work of such artists as Chago Armada or Cleva Solis was rescued. Aglutinador also welcomed those artists who, playing a leading role in the first and second generation of the 1980s in Cuba, had left the country and were not included in the exhibitions organized by Cuban institutions—among them Mart María Pérez Bravo, Arturo Cuenca, Glexis Novoa, Angel Delgado and Leandro Soto. Espacio Aglutinador also hosted works by Cuban-American artists such as Ana Mendieta, Ernesto Pujol, and Coco Fusco. This brave and determined personal effort became a required reference point in the reconstruction of contemporary Cuban art history beyond prejudices and empty, boxed-in thinking.

In an effort to stimulate dialogue and points of convergence, the panel “Dialogues: Cuban and Cuban –American Artists in Conversation” was presented in two parts. The conversations brought together Cuban-American and Cuban artists, who discussed their work and opened up the conversation to the audience, presenting an opportunity for audience members to speak with the artists involved in the Dialogues in Cuban Art exchange program.

To these two large panels, we must add the symposium’s opening session, “Shifting Perceptions, Transnational Movements Between Miami and Havana.” This session presented Cuban artists who live and work on either side of the Straits of Florida. The presentations by panelists Sandra Ramos, Glexis Novoa, Emilio Pérez, and Alexandre Arrechea targeted the sui generis conditions of art production in this category—which, though relatively new, is undoubtedly growing.

In this panel, Glexis Novoa´s presentation highlighted the still-persistent stigma of being, or not being, based in the island:

It is very curious how so many people are interested in Cuban art. They go to Havana and they visit so many studios of artists that live in Havana, but they do not even bother to visit studios of Cuban artists outside Cuba, even in Miami or New York. This is something that is very interesting to me. They go to visit my studio in Havana and they live in the United States. They want to see me in Havana. They don’t want to see me in the United States.

Another symptomatic fact, noted later by Novoa during the session focusing on Cuban institutions, attests to how areas of capricious, inexplicable censorship still persist among Cuban institutions. Although Novoa had been welcomed back in Havana and the Museo Nacional de Bellas Artes is preparing a solo exhibition of his work this summer, the artist was not allowed to participate in the talks held last year at Casa de Las Américas, which took place between June 4 and 5 in Havana as part of Phase 1 in Dialogues in Cuban Art.

Dialogues in Cuban Art is a magnificent portal—a bridge that stretches to infinity. It invites all of us to join this effort, to become active participants in this ongoing review, and in the work of compilation, inclusion, and reconciliation, that will eventually lead to the reconstruction and safeguarding of the gorgeous adventure that is Cuban art. This requires a much wider forum, and the joint involvement of artists, institutions, scholars and critics, to set up a systematic and inclusive platform that helps to fully reconstruct the history of contemporary Cuban art in the global era.

Below, videos of three presentations at the symposium: Alexandre Arrechea (in English), Lázaro Saavedra (in Spanish), and Sandra Ceballos (in Spanish), courtesy René Azcuy.