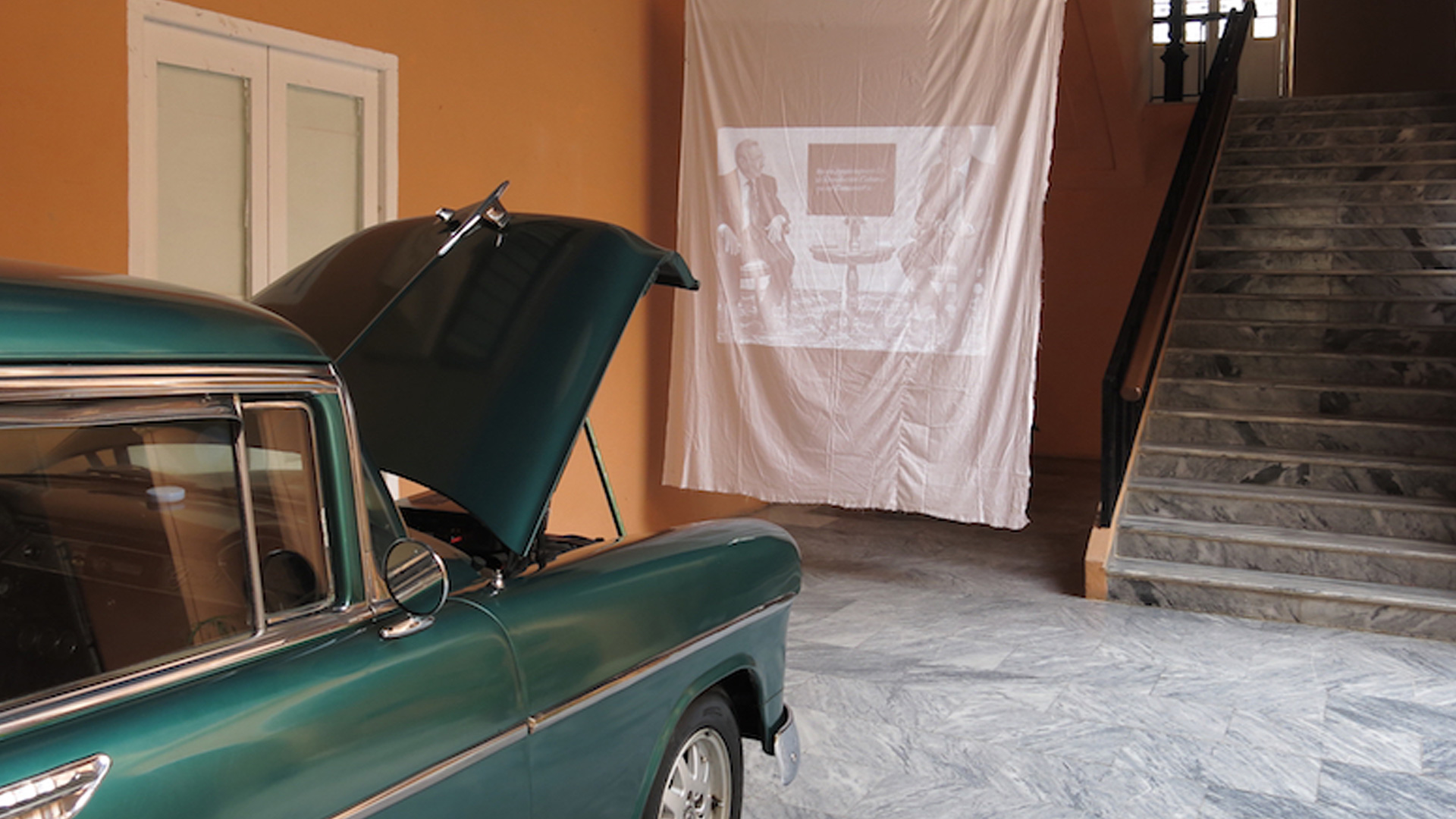 Lázaro Saavedra: Base / Superstructure was presented at the Wifredo Lam Center of Contemporary Art in Havana, February 16-March 16, 2016. The exhibition was presented in recognition of Saavedra as the winner of the 2014 National Prize of Plastic Arts, awarded annually by the Cuban government.

Although National Art Award exhibitions are usually presented at the Museo Nacional de Bellas Artes, the two floors of the Wifredo Lam Center provided a literal structure for Saavedra’s exhibition, an inquiry into the nature of art, inspired by Marxist philosophy.

Here is a photo walk-through of the show, with Saavedra’s statement about the exhibition and comments about specific works, excerpted from the exhibition catalogue.

Unlike most exhibition texts by artists and curators, Saavedra’s comments may be understood as extensions of the artworks, counterpoints to them, and/or textual artworks in their own right.

This exhibition aims to pay homage to visual thought as it manifests metaphorically, more or less, in the arts or sciences. In his Preface to the Introduction to the Critique of Political Economy, Karl Marx applies two architectural (Basis / Überbau = Base / Superstructure) to the social sciences, employing them in the critical analysis of society. The exhibition Base / Superestructura is inspired, among other things, by these concepts of Marxist philosophy.

A free interpretation of these ideas is further proposed—a symbolic representation, “materializing” them in an artistic form. This interpretation returns them to their original architectural assertion (without removing the philosophical references), by comparing two shows at different levels (lower/upper) in the Lam Center building. That willingness to find a meaning in the connection between the symbolic representations of base and superstructure is inspired—not without questioning—by one of the premises of Hermetic thought: “As above, so below; as below, so above.”

This work represents what it is: a canvas put through a wall. Have you ever wondered who will respond (contesta) to oppositional art (el arte contestatario)? Have you ever wondered who and what oppositional art asks to be responded to? Oppositional art arises precisely where the social action of anti-questioning art leaves off. Again, the author tells us of—catapults us, gives us a kick in the direction of—confrontation, and the direct and scathing criticism of the circles, squares, triangles (and polyhedrons, why not?) of power.

In several interviews with the artist, he was brilliantly unable to enlighten us about the title of this work and his relationship to it. But what is clear is the link between this installation and the phenomenon of aesthetic discordance in the process of artistic creation. The unbearable lightness of art that falls under its own weight, which is incapable of sustaining its own levitatation (see levitation art), redeems from the floor its own shadow as an extension of itself, a black ghost that ascends the institutional wall of culo blanco (white rear end)—no, cubo blanco (white cube)—in abstract geometric form, to the kingdom of heaven.

In this work everything is entirely clear, therefore you should not write tanta mierda (so much shit) about it. But it’s hard to resist the eschatological temptation … I do not know if you noticed the delicate detail of the small picture emerging from behind the large one, or the large one overshadowing  the small one…It was brilliant of the artist to turn a luminous physical event (the shadow) into a visual metaphor. The things that occur to the creative mind are truly incredible.

On Arte official: An exquisite work of stunning superficiality—as all good art is characterized and defined when it is worthy of representing surface art (superficial art), which is a counterpoint and eternal opponent of arte profundo (underground art). In this work the artist proposes, in a crazy way, to overlap the terms patriotic art and official art: The canvas, ergo art, as the flag of what? Does the official culture have a flag, the same as the nation?

Arte underground is a work that is inserted into the underground art movement, which evolved from the stagnant overground art. We must be redundant and emphasize that the difference between these two arts is that one moves, the other does not. This work overflows the literal, provoking a flood of self-referentiality that could drown the concept if it doesn’t know how to swim—or doesn’t know anything, not to speak or to write. This concept survived during the Special Period [after the collapse of the Soviet Union] as a lifeguard in an underground pool frequented by foreign concepts.

The Master said: “Driven by political maneuvering and content with punishments, the people become astute and lose shame. Led by virtue and moderated by rites, they develop a sense of shame and participation.” Entrepreneurship (el cuentapropismo) will evolve a way to sell, on the black market, boxes with “virtue” and “moderating rites” so that once they are sampled, it will be necessary to develop the sense of shame and participation. If the words I’m going to write are not more beautiful than a sheet of paper, then I will not write. A white sheet (blanco) is ugly (fea).

This work, full of the optimistic conceit of bipolar disorders, moves through the swampy terrain between suicide and homicide, and brings us back to post-Satorian or Nirvanic experiences, as applicable. The author, during ritual practices related to the fine art of seppuku (harikiri, not to be confused with hareKrisna, the god of the Yoruba pantheon) has deconstructed the aesthetic category of suicide, to masterfully innovate the neologism “Articidio” (of the masculine gender, said of the union in concubinage between “art” and “suicide”). The delicate detail of the cut, in the manner of the stylist Lucio Fontana, cannot pass unnoticed, as in the best tradition of slashing wrists, heiress to a “friki” subculture,” and to the rhythm of chords by the solo diva of Evanescence or Emonescene.

Lázaro Saavedra: Base / Superestructura was presented at the Wifredo Lam Center of Contemporary Art February 16-March 16, 2016.