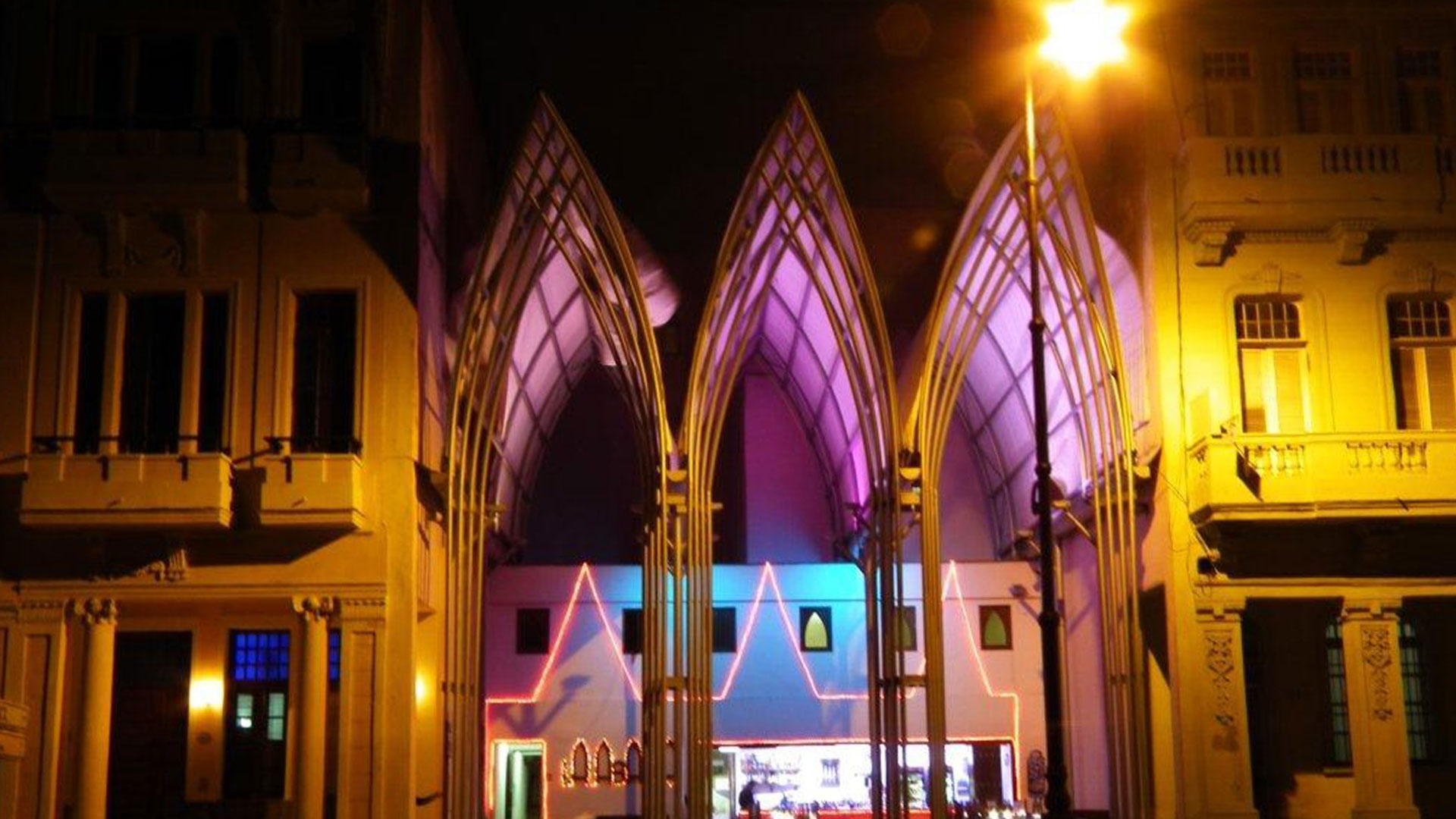 Cuban Art News rarely republishes articles that have appeared elsewhere, but this interview with Nelson Herrera Ysla, which originally appeared in Havana Times, is one we wanted to share. It appears here with the permission of Havana Times. — The Editors

One of the first lessons every architecture student in Cuba receives has to do with the concepts the Romans established for the planning and construction of buildings. In 1 B.C., author Marcus Vitruvius set down architecture’s three basic elements: resistance, functionality, and beauty.

When these students come out of university, however, they soon run into a harsh reality: functional and beautiful works ceased to be important in Cuba a long time ago, and next to no architect is considered an artist in the country.

Renowned art critic Nelson Herrera Ysla reflects on this and other issues. An architecture graduate, Herrera became a graphic design teacher early in his career and has been working at Havana’s Wifredo Lam Contemporary Art Center for some years now. This institution is responsible for organizing Havana’s arts Biennale, an event where Cuban and international architecture has always been present in some form or another.

Why did architecture cease to be considered a form of art in Cuba?

In the 60s, Cuban architecture had a moment of splendor, thanks to the building of a number of works that suggested a new approach. These included the Cubanacán art schools, the Cuba Pavilion, the Jose Antonio Echeverría University campus, a series of homes in Manicaragua (designed by historian and architect Walter Betancourt), the monument to the martyrs of Artemisa, and the Voisan Polytechnic Institute in Güines.

The modernist architecture movement in Cuba was extraordinary and left its marks everywhere, from Havana to Las Tunas, through Ciego de Avila, Matanzas, Pinar del Rio, and the Isle of Youth. Today, they are seriously considering demolishing one of the gems of Cuban architecture, the Varadero International Hotel, to build a new architectural complex there.

When the building of the Cubanacán art schools was suspended halfway through the construction process, there was a very strong reaction from the Ministry of Construction, which spoke out against all of these architectural works that were advancing new languages and codes.

I believe this was a very difficult moment for Cuban architecture. I think the University Martyrs Park, located at the intersection of Infanta and San Lazaro, was the last, great expression of revolutionary architecture.

As of 1966, architecture ceased to be a part of Cuban culture, and construction work became the guiding myth. The Architects Association ceased operations around that time also. Later came the National Architects and Construction Engineers Association.

In the 1970s, prefab buildings entered the Cuban scene, with large Soviet-styled panels and the Girón system [a flexible system of prefabricated concrete modules], which was invented in Cuba. All secondary schools in the countryside were built using this process. All of the large district and microdistrict projects, such as Alamar, in Havana, and Jose Martí, in Santiago de Cuba, began to be built. Farming communities, hospitals, and polyclinics were also built this way. Quantity was more important than quality.

They changed the name of the architecture school, which came to be called the Faculty of Construction Work. The word “architecture” began to be used at school again only a few years ago. We still haven’t recovered from the 1970s. We’re still paying the consequences.

The field of architecture critique, which existed before the revolution, also disappeared.

I published my first architecture critique piece when I was 19, while still a third-year student, in El caimán barbudo, a magazine which published a number of renowned Cuban poets, essayists, and writers in its first years.

Roberto Segre had done serious work as a professor, critic, and historian, as had Fernando Salinas. Mario Coyula was beginning to publish his first articles at the time. There was a group of architects who were also publishing works as critics.

In the 1960s, the journal Arquitectura de Cuba (“Cuban Architecture”) was relaunched. This was a very important publication that set down standards for architecture critique. In addition, architecture-related articles were published by Bohemia, Cuba Internacional, Union, and La Gaceta de Cuba, but, in much the same way architecture disappeared, all related critiques also ceased to exist.

Arquitectura de Cuba continues to be published on a bi-yearly basis, edited by architect Eduardo Luis Rodríguez, who I believe is Cuba’s most important architecture historian. The magazine is in need of financing. He puts together the issues and waits for someone to finance the publication. Two or three years can go by before a single issue is published. The magazine doesn’t have much circulation and isn’t sold at kiosks or bookstores.

In your opinion, why aren’t the projects conceived at the Faculty of Architecture every year more widely divulged?

The scant socialization of architecture also affects our universities in general. Recently, through the TV Round Table program, people found out there is a new generation of industrial and marketing designers. I believe people are unaware of what’s happening in the field of architecture.

A new generation of formally trained architects, who are trying to change the order of things and divulge what they’re doing, has emerged, but this is a difficult task because architecture has been all but forsaken in Cuba.

There are no spaces devoted to the field in any printed or televised media. The National Architecture Exhibitions are only promoted within architectural associations. Architects have won extraordinary awards during these exhibitions and people don’t know about these, just as they are unable to name Cuba’s architectural wonders.

If the media were to report on the projects carried out by new and established architects, this would greatly contribute to eliminating the negative image that surrounds contemporary Cuban architecture.

At the Faculty of Architecture, led by architect Augusto Rivera, students have put together environmental design projects for the Cuatro Caminos intersection and market, for the town of Casablanca, to embellish the unappealing entrance to Alamar at the intersection of Los Cocos and Via Blanca. There are very good projects for the Havana Bay, and the beginning of a series of works to complete the ports of Regla and Casablanca.

On the other hand, the city is over-saturated with promotions for the architecture of the colonial and republican eras, with which I’m already fed up. We speak only of the past, about the great monuments, from the Real Fuerza castle to the Capitolio building, but people know nothing about new projects.

The 150 great works of Cuba’s modernist movement, which were collected in a book, have never been covered on television. Cuba has an interesting architectural legacy. We must rescue it. Knowledge of architecture can be encouraged by divulging information on good pieces.

What television and the press report on are insignificant projects and architecturally poor works built around the country. One of the spots aired on television, highlighting Cuba’s beauty, focuses only on 20th-century eclecticism in the countryside.

What are independent groups of architects?

These are groups of architects who sometimes offer services in their free time, outside working hours. Some don’t work for the State and are directly hired by foreign firms for certain projects.

Since designing the Hotel Santiago and the Che Guevara Studies Center, José Antonio Choy has had the fortune of being commissioned for large projects, such as the expansion of the Hotel Parque Central in Old Havana, the La Puntilla commercial center in Miramar, and the remodeling of the International Financial Bank on the intersection of 5th and 92nd, in Miramar. Currently, he is working on the expansion of the Casa de las Americas library, which he also designed.

Unfortunately, the Ministry of Tourism, which is responsible for most construction work at the moment, has turned its back on Cuban architects and practically all hotels, spas, resorts, bungalows, and motels around the country are designed by foreign architects.

It’s curious that neither young nor established Cuban architects are ever approached or offered an opportunity to develop their work, not even at a hospital, a polyclinic, a school, a research center, or a university.

Since they have to make a living, they approach the owners of private restaurants and new Cuban property owners, who commission them for projects, homes, coffee shops, motels, hostels, whatever.

These groups of independent architects, which emerged in recent years, are responsible for the best architecture we see in Cuba today. They have a lot of creativity, imagination, and talent, and they are fighting tooth and nail, as official Cuban institutions do not hire them for anything. A new architectural movement is taking giant leaps in Cuba, and it is not being covered or acknowledged by the media.