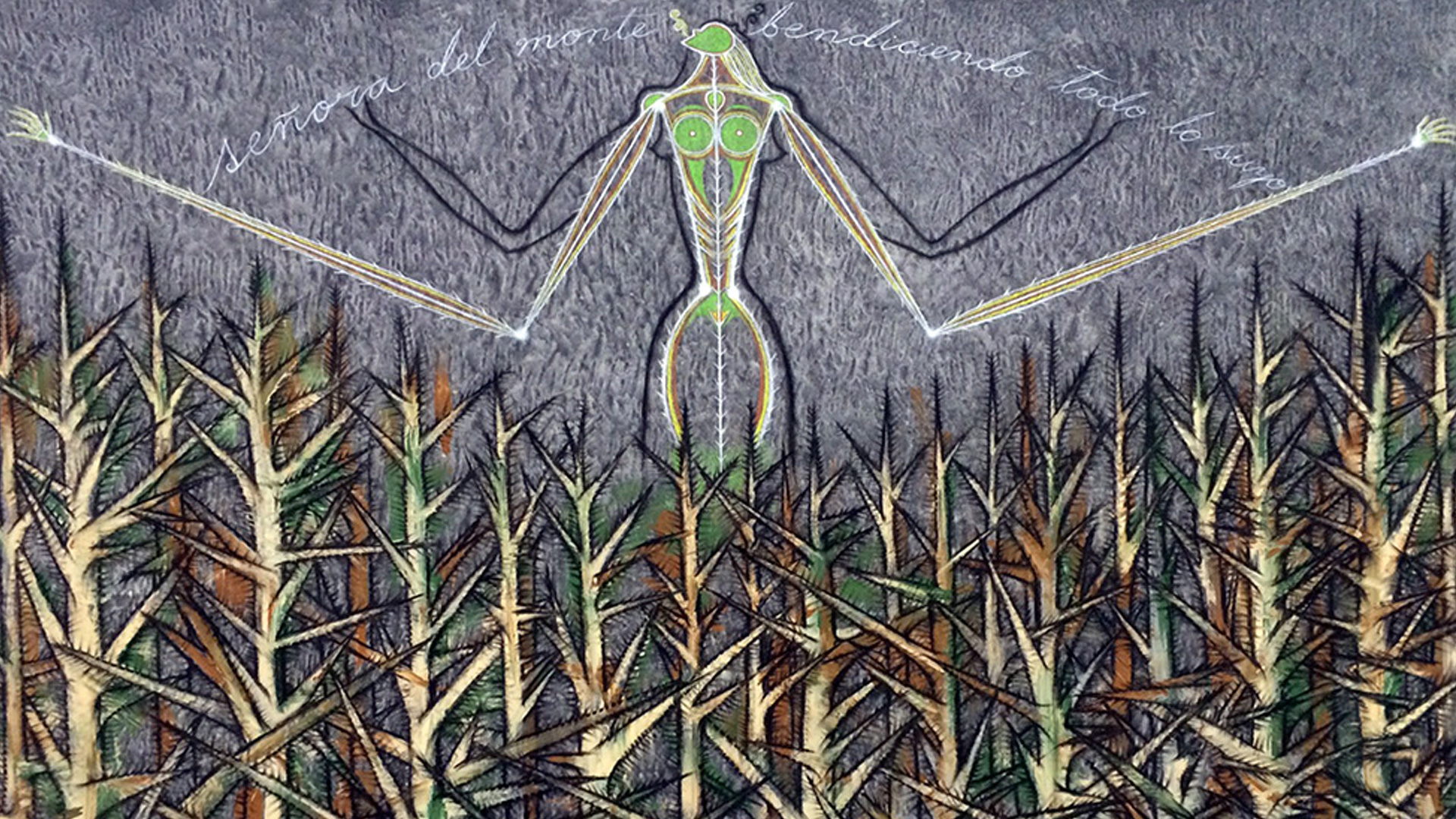 Coming soon: Havana Design Biennial.  With a tagline of Diseño y prosperidad, the 1ra Bienal de Diseño La Habana—otherwise known as BDHabana 2016—will take place May 14–20. Open to design students and professionals worldwide, the Biennial’s first edition will feature exhibitions, symposia, and events in Havana, and in Camagüey and Santiago de Cuba. Coordinated by Roberto Miguel Torres, the Biennial will explore issues of design and industry, creative innovation, and workshops to promote design as an element of socioeconomic development.

René Francisco in Havana. Books are the subject of Francisco’s new solo show, Asthma, at Galería Habana: heaped in colorful landscapes, exploded into space (with a few laptop computers), or dropping from the sky. The exhibition includes small and large-scale canvases as well as videos. On view through March 25.

Glenda León in Las Palmas de Gran Canaria. At the Centro Atlántico de Arte Moderno, Glenda León: Cada Respiro presents a selection of the artist’s video works: the five-screen installation Cada Respiro, which premiered last year at Matadero Madrid, along with Intermitencia (2000), Libido (2001), and El enemigo (2007). For a photo walk-through of Cada Respiro, see the album on the Cuban Art News Facebook page. On view at CAAM through May 22.

And Iconocracia. Fresh from its run late last year at Artium in northern Spain, this group show explores how artists of several generations have explored and wrestled with the “official” iconography of the Revolution and post-Revolutionary Cuban life. Artists in the show include Juan Carlos Alom, Ana Mendieta, Carlos R. Cárdenas, Carlos Garaicoa, Reynier Leyva Novo, and Geandy Pavón. On view at CAAM through May 22.

Leyva Novo in Italy. This past weekend, Reynier Leyva Novo opened his first solo show in Italy at the Galleria Continua space in San Gimignano. El peso de la muerte (The Weight of the Death) includes four series that convert written documents—lists of World War II victims, political books that influenced totalitarian regimes, sections of the Cuban penal code—into a specific quantity and area of ink, calculated using software especially designed for this task. Another series takes a similar approach to the steel used to make guns and other firearms. On view through May 1.

Aimée García in Los Angeles. Following Wide Shadow, its just-closed solo show by José Manuel Fors, Couturier Gallery is bringing a second Cuban artist to LA. Opening this Saturday, February 20, Aimée García: Suprematist Speech presents mixed-media collages and embroidered photographic self-portraits. In the series Suprematist Speech, García collages newspaper and magazine articles onto flattened, unfolded cardboard boxes, then obscures them with embroidery to create blocks of color. The work references the Suprematist movement of Kazimir Malevich, which based art on the “supremacy of pure artistic feeling.” The show opens with a 6–8 p.m. reception on Saturday, and runs through March 26.

Ramos and Labat in Arizona. At the Arizona State University Art Museum in Tempe, Watertight: Sandra Ramos presents a selection of the artist’s video animations and sculptures in her “Searching Ithaka” series. The show is a homecoming of sorts for Ramos, who first presented her work at the museum in 1998, as part of the group show Contemporary Art from Cuba. The show runs through May 28.

Also at the ASU Art Museum, Tony Labat: Love Me Two Times is a two-part exhibition. Currently on view: Irregular Encounter: Leveling the Field, an installation that debuted at the 2012 Havana Biennial. Consisting of a customized billiards hall with bleachers, a coffee stand, and a handmade pool table in the shape of Cuba, the installation relies on audience participation to activate the work. On view through April 21, followed by part two of the exhibition: Day Labor: Mapping the Outside, which records Labat’s video surveillance of day laborers waiting to be hired outside his studio. Part 2 runs April 30–May 28.

Cuban art in Tallahassee. At the Florida State University Museum of Fine Arts, Cuban Art in the 20th Century: Cultural Identity and the International Avant Garde traces the development of Cuban art in the first part of the 20th century. Guest curated by Segundo J. Fernández with organizational support from gallerist and collector Ramón Cernuda, the exhibition features more than 100 works from private collections in Florida, including art by Victor Manuel García, Amelia Pelaéz, and Carlos Enríquez. Art historian Juan A. Martínez, professor emeritus, Florida International University, will deliver a lecture about the exhibition on Tuesday, February 22, 7–8 p.m. The show runs through March 27.

And in Tampa. Looking ahead to next month, Growing Up in Neverland brings seven Cuban artists to the University of Tampa in an exhibition organized by Pinar del Río–based curator David Horta. Artists in the show include Ernesto Leal, Pedro Pablo Oliva, Sandra Ramos, Lázaro Saavedra, Esterio Segura, José A. Vincench and the art collective The Merger. Horta, Saavedra, Ramos, Vincench, and Segura are scheduled to lead gallery talks and discussions. Opening Friday, March 4, the show runs through March 18.

Mendieta in Fort Lauderdale. Ana Mendieta: Covered in Time and History, the museum retrospective of her moving-image works, will open at the end of February at the NSU Museum of Art. For a walk-through of the show, see our article from last September, when the show debuted in Minneapolis.

Campins in New York. Chelsea’s “Cuban Spring” continues with last week’s opening of Alejandro Campins: Lapse at Sean Kelly Gallery. Campins’s first US solo show follows the solo show by Diana Fonseca Quiñones that closed February 6. “I am interested in the idea of impermanence and how it manifests itself in nature and its relationship with architecture,” Campins said in a written statement, and the works in Lapse focus on the Cuban landscape. For photos of the exhibition and the opening, see the album on the Cuban Art News Facebook page. The show runs through March 12.

And Mendieta. Ahead of the museum retrospective opening soon in Tampa, Galerie Lelong is presenting a survey of Mendieta’s work in film and video. Ana Mendieta: Experimental and Interactive Films showcases 15 of her moving-image works, recently transferred to digital. Mendieta’s innovative approach to film is apparent in works like X-ray, c. 1975, which depicts the interior of her skull as she speaks, and Butterfly,1975, in which she adds graphic effects with a 16-channel video processor. For images of the exhibition and the opening, see the album on the Cuban Art News Facebook page. On view through March 26.

And then, four women artists. Sean Kelly isn’t the only Chelsea gallery to present a pair of Cuban shows this season. In May, Galerie Lelong will open an exhibition spotlighting four Cuban artists, all women: Amelia Pelaéz, Loló Soldevilla, Carmen Herrera, and Zilia Sánchez. Several works by Soldevilla are also on view—for another few days—in Concrete Cuba, which closes at David Zwirner this Saturday, February 20.

Havana galleries in New York. Cuban artists aren’t the only ones heading to New York this spring. As the art fair season gets underway, Galería Habana will participate in its first Armory Show, showcasing work by Ariamna Contino, Carlos Garaicoa, and Yoan Capote. At Pulse art fair, Galería La Acacia will present work by Ciro Quintana. Both fairs run March 3–6.

Another Bruguera event in New York. Last month’s Update column mentioned Bruguera’s upcoming performance as part of the exhibition When Artists Speak Truth… at The 8th Floor art space. That event is now scheduled for Sunday, March 6—check The 8th Floor website for further details. And on Thursday, March 17, Bruguera speaks at the CUNY Graduate Center on the topic of “The Artist as Activist,” in a conversation with art historian Claire Bishop. 6:30 p.m. Admission free, but reservation is required.

Honorary doctorate to Fabelo. Roberto Fabelo, who has traveled and exhibited in Mexico since 1985, has been awarded an honorary doctorate from the FBC Escuela Bancaria y Comercial, a prominent business school in Mexico City. The degree was awarded late last month.

Save the date: Félix González-Torres in New York, Milan, London. The Félix González-Torres Foundation has announced a series of exhibitions to open on a staggered schedule in the three cities. Curated by artists Julie Ault and Roni Horn, each exhibition spotlights a specific form that the artist worked with. The first show opens at Andrea Rosen Gallery, New York, on May 5; the second at Massimo De Carlo, Milan, on May 20; and the third at Hauser & Wirth, London, on May 26.

Save the date #2: Elsa Mora in New York. The National Arts Club in Gramercy Park will host a solo show of Mora’s papercut works, photographs, drawings, and other works. Organized by veteran Havana Biennial curator Magda González, Elsa Mora: Timeline will run May 4–28.

Fusco at Liverpool Biennial. Coco Fusco is one of 40 international artists commissioned to make new work for the 2016 Liverpool Biennial, which takes place July 9–October 16. “Dr. Zira will address the citizens of the United Kingdom,” Fusco wrote on Facebook.