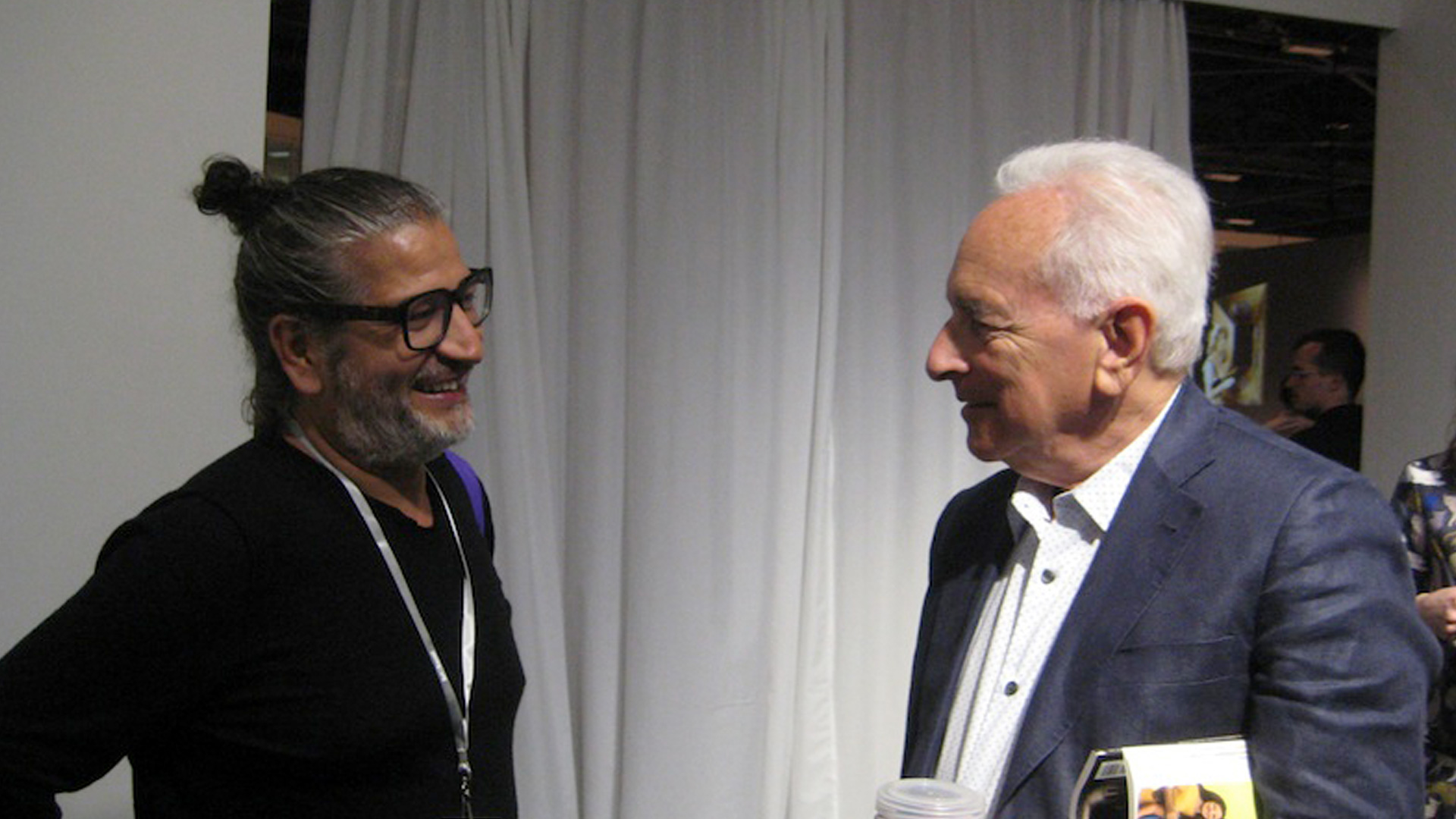 Perhaps the most intriguing sign of Cuban art’s rising visibility at this year’s Art Basel Miami Beach was the Salon conversation “The New Role for Art in Cuba,” held Thursday evening, December 3.

A capacity crowd of more than 200 listened attentively as Carlos Garaicoa; Glenda León; Stéphane Aquin, chief curator of the Hirshhorn Museum and Sculpture Garden in Washington, DC; and the moderator, curator and art historian Iliana Cepero Amador, gave thoughtful consideration to a range of topics, from potential roles for private galleries in Havana to income inequality to the current focus on painting by young Cuban artists.

The first part of the conversation was a focused exchange between Cepero Amador and Garaicoa, which took as its starting point the recent opening of Galleria Continua’s Havana space, and the presentation of the gallery’s 25th-anniversary retrospective show at the Wifredo Lam Center.

As moderator, Cepero Amador began by framing the discussion with a quote from British curator and art critic Julian Stallabrass: “The art world is bound to the economy.” With that, she asked Garaicoa: What are the implications of inviting a foreign commercial gallery into a public space like the Lam Center, which was formed on the premise of gathering and promoting art of developing countries?

Garaicoa responded by praising Galleria Continua for its functioning in a broader sense as a cultural center, bringing artists into public spaces—a role it has played in Europe for many years. “I say, Thank God it is a gallery like that,” that came to Havana, he commented, “and not a really awful commercial space.”

Rather than focusing on the opening of a single gallery, Garaicoa said, “I would love that many get the opportunity to arrive there and make a point of view. This is what we are missing, and have been missing for years.”

As Garaicoa sees it, “Right now, Cuba has to construct, or reconstruct, every part of the civil society.” Among the concerns are “how art can be developed in a situation that is not the traditional tension that we always had, belonging to certain institutions, very politicized, with very specific agendas.”

The art scene in Havana, he continued, is “a context where people always arrive as tourists. It’s a passage all the time, there’s nothing substantial that stays there. I hope that this gallery, and the other galleries or institutions that arrive, will create the ground to do something very important in the near future, in the next two or three years.” At the same time, he said, “we need to have the feeling that the system of Cuba is open to another level of possibilities.”

Speaking later in the conversation, Stéphane Aquin agreed with Garaicoa’s assessment. “There’s an amazing artistic scene in Havana,” he said, “but there’s a critical lack of civic institutions.”

Glenda León pointed to the turn by younger Havana artists toward painting. “Because it sells,” she explained. “You see two-meter, three-meter paintings. It’s a vogue.” More disturbing, she said, is that “maybe you see young people who before did video and installations and other kinds of work. Now, they just paint, because they know that there are a lot of collectors coming.”

With initial training in dance rather than art—because as a 12-year-old, “I hated drawing with all my soul”—and later art history, León and many of her peers of the 1990s and early 2000s reacted against the expectation that Cuban art tackle history and politics. “The feeling we had was, OK, enough with political art,” she said. “Let’s do something that’s universally understood.”

León saw this, in part, as a need by the artists of her generation to differentiate themselves in the marketplace. She saw the current turn toward painting on the part of younger artists as shaped by the market as well.

“As we are witnessing,” Cepero Amador said, “there is a whole new class emerging in Cuba that have money. They are entrepreneurs, and they might start buying and collecting Cuban art. Will that impact how Cuban artists create their work?” she asked the panelists. “Will they start working to satisfy that particular taste?”

With that, the conversation veered toward growing economic inequality on the island, an issue that nations around the world are grappling with. “I’m very curious to see what will happen with money, more than the collecting thing,” said Garaicoa. “We are facing something new: people making money, and people making no money at all. And we are facing a socialist institution with very specific political agendas and strategies, and we are facing ways of not getting anything from what has happened.” What is needed, he said, is “to see how we can create more democratic formulas to make this money arrive to people, to culture, and to education.”

As for local Cuban collectors, León responded with smile. “I have to say, my work is not in these houses,” she said, before adding that her work is, in fact, in the home of noted collector and philanthropist Ella Fontanals-Cisneros. For his part, Garaicoa asserted that his work was in many collections on the island, and “I’m very proud of it.”

The conversation then turned to questions of political and non-political art, and the role of painting in the current Havana art scene. “It strikes me that there’s some sort of chasm here in expectations and production,” Aquin observed. “Maybe the foreign market has indeed been expecting of Cuban artists that they take on the challenges of historical conditions, and that’s what we expect—to the point that we’re not looking, or seeing, the very good painting that may be done, that the public would be more sensitive or receptive to the painting.”

The possibility “that we are now currently taking in, in the foreign market, bad political art and missing out on great non-political painting is something that requires a very deep knowledge of the scene,” he concluded. “And what I see as problematic now is how little depth and commitment there is within that scene from most of the foreign market, collectors and investors.”

Garaicoa pointed out that the current international interest in Cuban art is not without precedent. “I lived this in the 1990s already,” he said, “this explosion of Cuban art.” Back then, he recalled, museums and collectors offered opportunities for artists to go abroad, giving them the capacity to gain international experience and a basic understanding of how the art market functioned.

“And I hope this happens again now,” he said. The current increased visibility of Cuban art is best used “not only to make easy money in hand,” but to give artists a better understanding of the new opportunities facing them—so they’re not “in the studio making something that they believe will satisfy the market. We know that the market is never satisfied,” Garaicoa said. “We can only satisfy ourselves doing art. And then we’ll see the rest.”

Asked about the elite lifestyle of successful artists in Cuba and whether it would continue into the future, León responded, “That depends on the system, and the economy and the politics.”

Garaicoa took a broader view. “To be an elite artist with success is always elite—not only in Cuba. It’s an elite here [in the U.S.], it’s an elite in Spain, and an elite in Canada.” He went on to add that “No artist wants to be a Ghanaian artist, or a Cuban artist, or a Canadian artist. We are artists. We are people who are thinking, who are developing ideas. And probably this opening [of Cuba-U.S. relations] will, I hope, for the first time give us the opportunity to have an international context.”

This new context, he said, “will give us hope. New frontiers. We will open more and get more from abroad. We will get more information, and it will be easier to leave, and to be here. To try to define yourself as an artist—as an international artist. It’s the only way to be an artist today.”