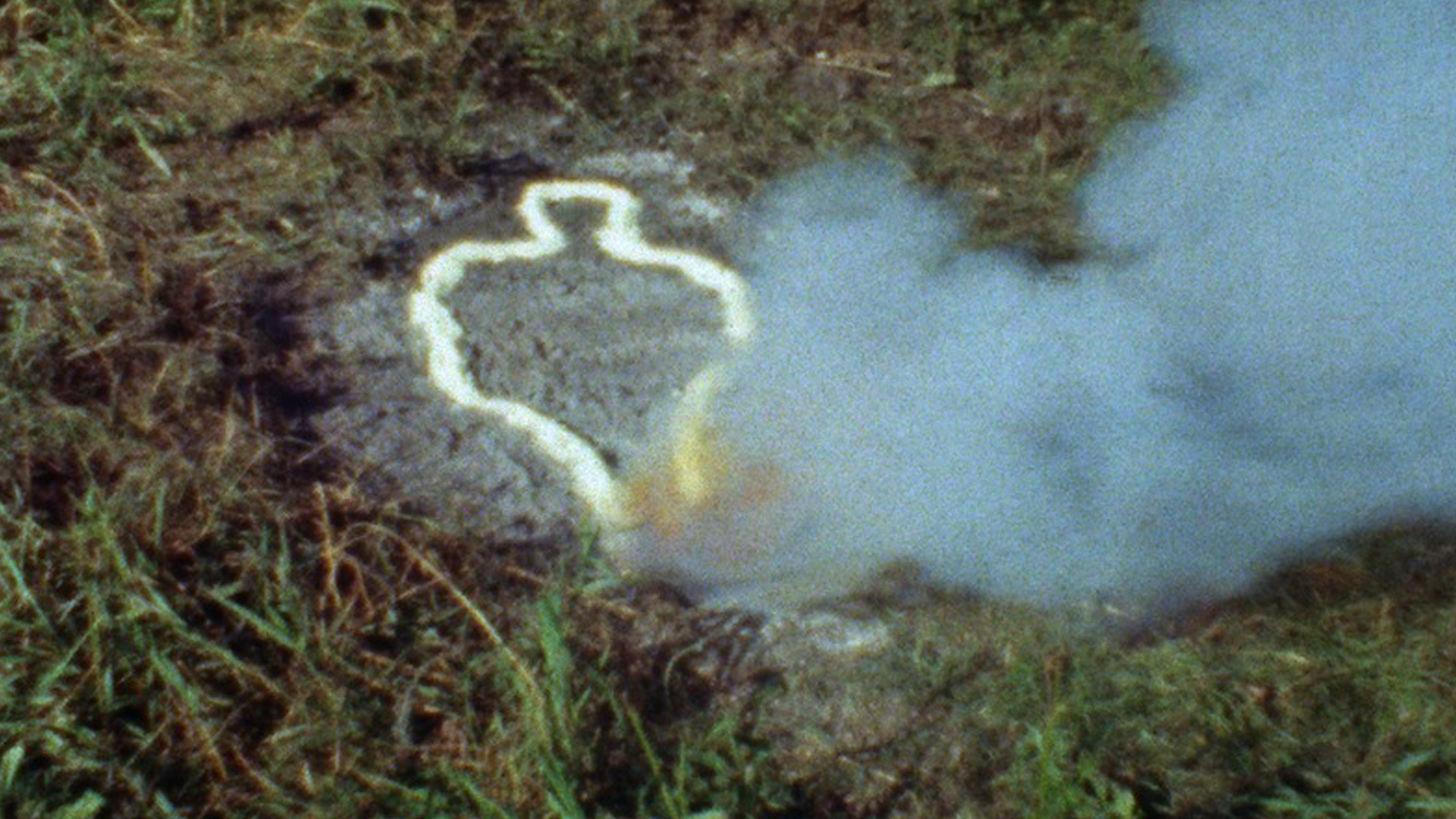 Today, the Katherine E. Nash Gallery at the University of Minnesota presents Covered in Time and History: The Films of Ana Mendieta, the first gallery exhibition and catalogue specifically devoted to the filmworks made by this highly acclaimed and influential artist. The exhibition includes 21 filmworks and 27 related photographs by the artist, the largest collection of Mendieta’s film works to be presented as a full-scale gallery exhibition in the United States. It also includes a documentary short about Ana Mendieta, Nature Inside, by Raquel Cecilia Mendieta, the artist’s niece and film archivist for the Estate of Ana Mendieta Collection.

Covered in Time and History: The Films of Ana Mendieta is curated by Lynn Lukkas, chair of the Department of Art at the University of Minnesota, and Howard Oransky, director of the Katherine E. Nash Gallery.

The exhibition and its catalogue, co-published by the Katherine E. Nash Gallery and University of California Press, are the result of three years of collaborative research into the artist’s moving image practice, conducted by the University of Minnesota and the Estate of Ana Mendieta Collection. In preparation, the Estate of Ana Mendieta Collection provided full access to the artist’s filmworks, transferred them to 2K high-definition digital format for the exhibition, and provided still images of the entire film collection from the new high-definition scans for the catalogue.

Exhibition co-curator Howard Oransky walks us through a preview of the show, with stills from several of Mendieta’s key film works.

Ana Mendieta’s particular merging of sculpture, earth art, and performance (earth-body, as she termed it) stands as a singular artistic expression. The artist’s personal biography encompasses the existential dilemmas of the modern era: the experience of personal, cultural, and political displacement; the loss of connection and continuity with one’s individual and collective past; the pressure to conform and assimilate in a foreign environment, language, and value system.

Mendieta’s work demonstrates an economy of means and a complicated beauty. She was influenced by and interested in the artistic movements of her time, including Minimalism, earth art, performance art, and feminist art, as well as the historical and spiritual legacies of many cultures, ancient and modern. She drew from each of these influences, but ultimately it is the unique, original, and surprising inventiveness of her work that sets it apart and has characterized her continued relevance for subsequent generations.

Ana Mendieta made the films Moffitt Building Piece and Sweating Blood (above) in response to the sexual assault and murder of University of Iowa student Sarah Ann Ottens in 1973. These silent films speak out against that crime with the language of art unfolding through the temporal structure of film.

The exhibition also includes the two films in which the artist is seen writing out declarative statements by hand: Blood Writing and Blood Sign, both made in 1974.

During the 1970s Mendieta travelled to Mexico nearly every summer, where she made many important artworks. The exhibition includes Creek, Silueta del Laberinto (Laberinth Blood Imprint), and Burial Pyramid, all made in Mexico in the summer of 1974. In these films Mendieta established her unique earth-body esthetic, merging her body with the earth through an exploration of history and memory. Also from 1974, the film Mirage symbolically tells the story of Mendieta’s separation from her family and home in Cuba through a dual narrative of the mother/daughter relationship.

The exhibition includes two films from 1975: Blood Inside Outside and Energy Charge. The first is an astonishing psychological investigation of autonomy and vulnerability, rendered with unflinching honesty. Energy Charge uses the technology of filmmaking to establish the ancient mythological tree of life theme in Mendieta’s oeuvre.

Anima, Silueta de Cohetes (Firework Piece) was made in Oaxaca, Mexico, in the summer of 1976. This stunningly beautiful film is a poetic metaphor on the passage of time and physicality.

Mendieta’s artistic practice included use of the four classical elements: earth, water, air, and fire to evoke layers of history and meaning in the work. Untitled: Silueta Series, 1978, further explores the tree of life theme through a burning tree, from which glowing hands magically appear.

Silueta de Arena, from the same year, finds the sublime edge of memory and experience where the surfaces of sand and water meet. Also from 1978, Untitled: Silueta Series brings together Mendieta’s interests in the ritualistic aspect of artmaking and transformation of the earth into sacred space.

The exhibition includes three films from 1979. In Volcán, the artist used the form of the volcano as a metaphor of the earth as a site of both solace and disaggregation. Untitled: Silueta Series takes place at the opening of a small cavelike structure that Mendieta carved into her Silueta shape, anticipating her epic Rupestrian Sculptures made in Cuba three years later. The next 1979 Untitled: Silueta Seriesfilm in the exhibition is thematically related to Blood Inside Outside. The burning Silueta shape in this film exists as a fully abstracted idea that is part human, part earth, and part tree. Birth (Gunpowder Works), from 1981, is a wonderfully graphic film in which the dried, cracked mud and raking light of the Iowa landscape give birth to a dream of artistic magic and power.

The last three filmworks in the exhibition, all made in 1981, can be seen as a trilogy on the relationship of displacement, return, and reconciliation. Esculturas Rupestres (Rupestrian Sculptures)is Mendieta’s epic cycle of sculptures carved into the limestone walls at the Cuevas de Jaruco in Havana, and interpreted through this film. A journey through real and metaphorical time, Esculturas Rupestres (Rupestrian Sculptures) marks Mendieta’s return to Cuba and her connection to the ancient myths of the caves at Jaruco. Untitled takes place at the beaches of Guanabo, La Habana, Cuba. The film tells the story of longing for homeland, the stretched-out time of separation. This film is shown publicly for the first time in our exhibition.

Ochún was made as a video off the coast of Key Biscayne, Florida. The Silueta figure in this work points toward Cuba, the water between Florida and Cuba rippling through its form. Named after a Santería goddess, Ochún transforms the pain of separation into a restrained poem of color, light, movement, and sound.

The exhibition also includes Ana Mendieta, Nature Inside, a documentary created by Raquel Cecilia, filmmaker and archivist of the Estate of Ana Mendieta Collection. The artist, Ana Mendieta, narrates as corresponding images of her work in both still and moving images highlight her themes and meanings behind her work. The documentary includes several Super 8mm film clips from previously unseen Mendieta filmworks, which were recently scanned to 2K/HD. The piece is underscored by Cuban-influenced music by composer Carlos José Alvarez. Raquel Cecilia is currently in post-production on a feature length documentary on the life and art of her aunt, Ana Mendieta: Rebel by Nature.

Covered in Time and History: The Films of Ana Mendieta runs September 15­–December 12 at the Katherine E. Nash Gallery of the University of Minnesota, Minneapolis. In 2016, the exhibition will travel to the NSU Art Museum Fort Lauderdale and the University of California, Berkeley Art Museum and Pacific Film Archive.