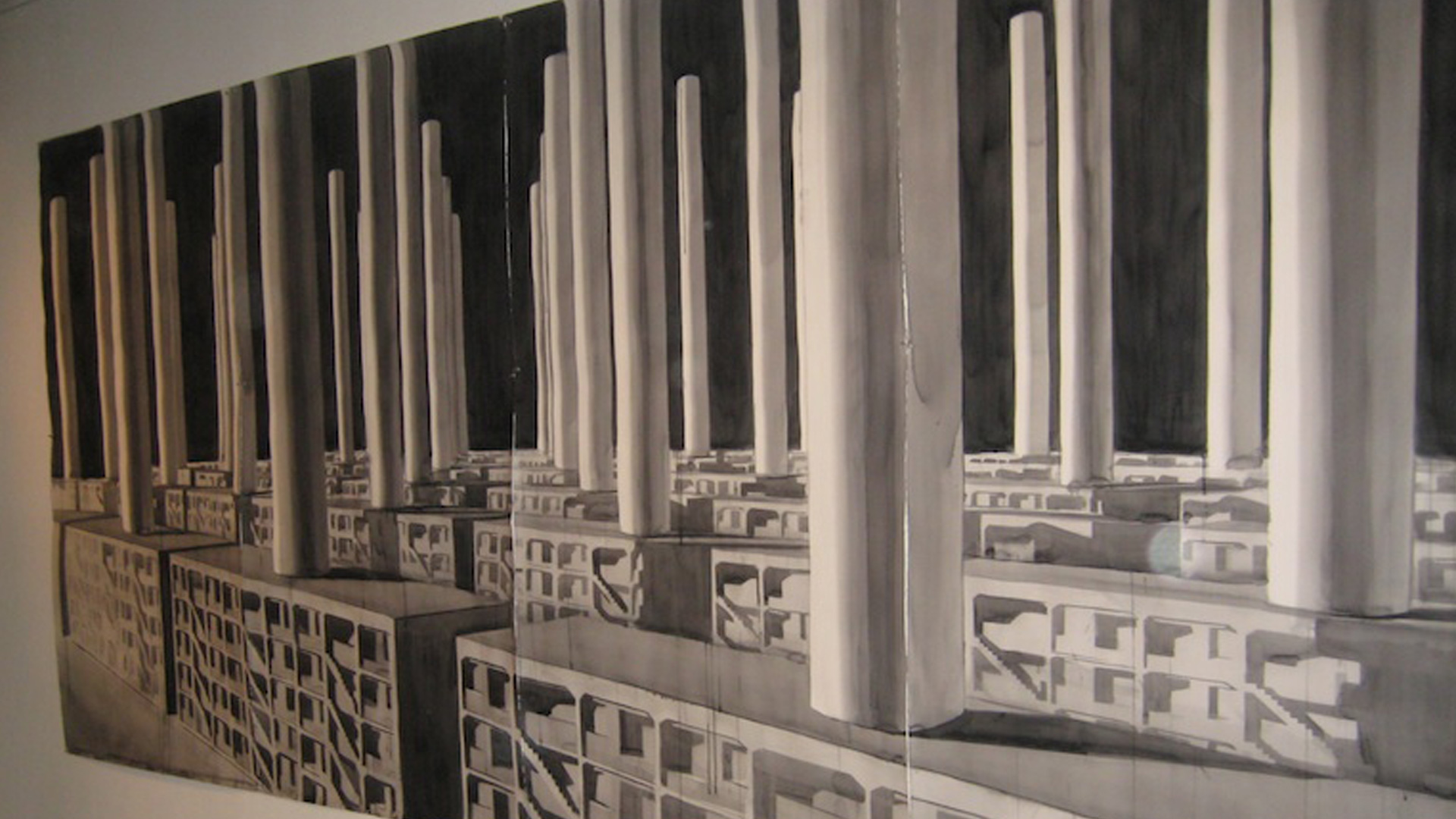 “This is a show that I’ve been working on for so many months,” Alexandre Arrechea explained at the opening of El mapa del silencio, his current exhibition at the Museo Nacional de Bellas Artes in Havana. The show opened May 23, coinciding with the Bienal, and remains on view through next month.

Coming into the gallery, the visitor is faced with the show’s title work, El mapa del silencio (The Map of Silence), 2015, a large-scale video and installation piece that occupies a central space in the gallery.

On the other side, behind the video projection, the work features a platform with discs of photos, depicting drops of dew and honey, standing on end.

A second installation, El pacto (The Agreement), 2015, is also positioned at the center of the gallery.

Perhaps the most commanding work in the show is Atlántico, 2015, a mural painted directly on the gallery wall, which runs 26 meters in length (more than 85 feet).

In addition to the mural itself, Atlántico includes a small bridgelike structure affixed to the wall.

The masklike image in the oversized tapestry L2VED2CH3, 2015, is collaged from architectural details of facades in different neighborhoods of Havana. (For more about this work, see our preview of the show.)

La cantidad hechizada (The Enchanted Quantity), 2015, is one of two large-scale watercolor drawings in the show.

The other large-scale watercolor drawing is the multi-panel Alamar, 2015. At the exhibition opening, Arrechea explains that his work is dedicated to the people of Alamar, a district in Habana del Este that is dominated by prefab, Soviet-style housing projects. “Alamar as an architectonic project is very complex,” he says.

“It lacks many things that are necessary for a city to function. But it has developed a sort of counterculture, very alternative, which is so powerful that you can’t get rid of it. And for me, that’s what counts. That’s why for me,” he adds, “Alamar has become a sort of sledgehammer to hit on other things.”

Writing about the show, its curator, Corina Matamoros, describes El mapa del silencio as a project in which Arrechea’s interest in exploring architectural space “is displaced to an area of limited subjectivity. From the viewpoint of intimist reflection, while observing the real world, the city, a determined neighborhood, a faded wall, the peculiar marine architecture or the exact point in which an idea or a pact are born, he focuses on what has not been said yet, on those things that are obliterated in the complex weft of the city. His proposal revealing what is hidden is precisely a map of silence.”

At the opening, Arrechea confesses that in the months of preparation for the show, he had some doubts. “This is my first big exhibition in Havana, and the public in Havana is very exigent,” he says. “You get nervous after so long not exhibiting here. And now, being open to everybody is kind of scary. You have to be really prepared to do something like that.”

But, he adds, “I have already received a lot of comments about the show, very positive. That helped me a lot to continue going on.” With the show now on view for Cuban museumgoers, “I’m completely satisfied. I’m really pleased, really happy.”