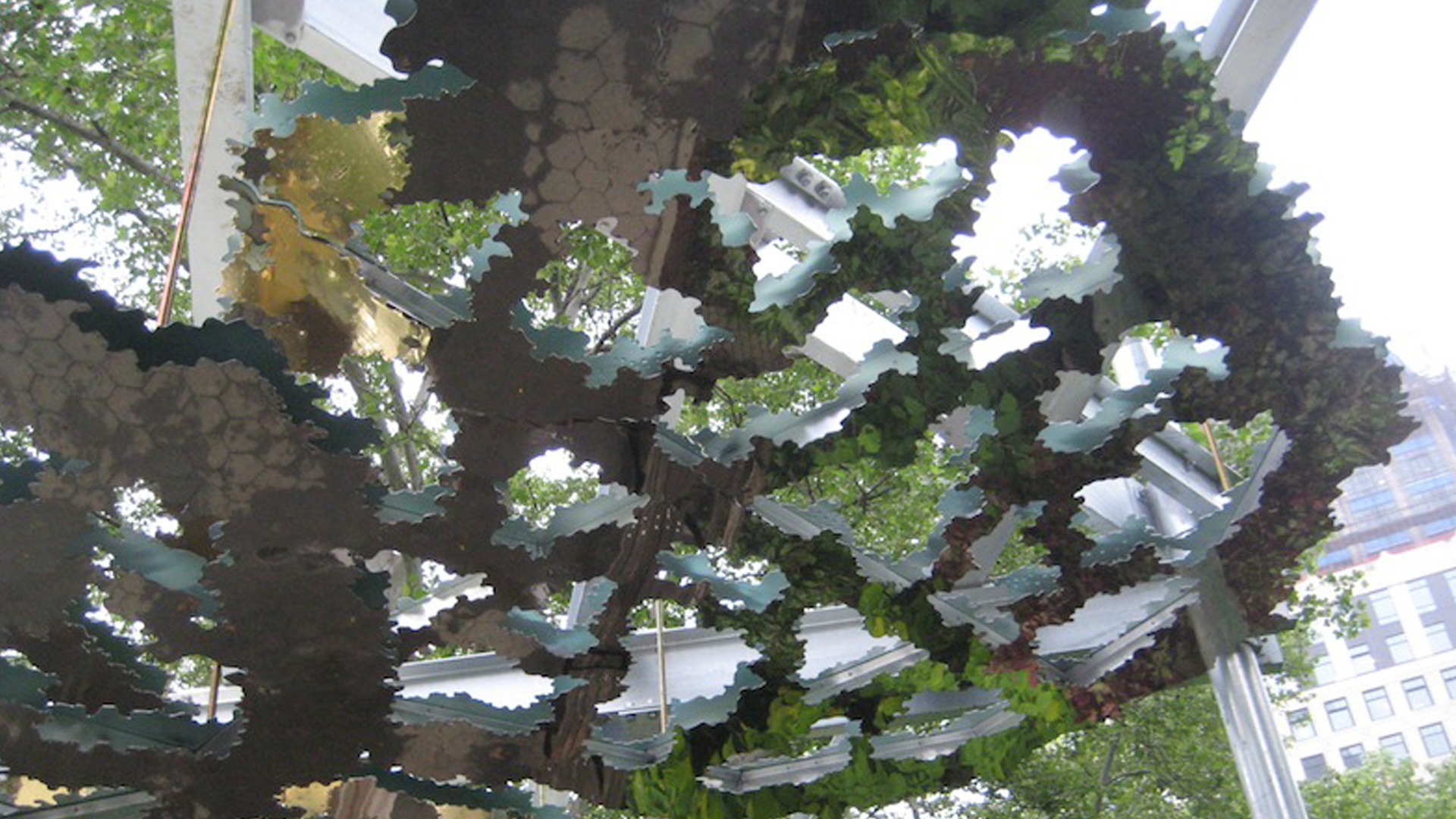 On June 1, Teresita Fernández unveiled a site-specific public art project in Lower Manhattan’s Madison Square Park. In her speech at the opening reception, she spoke movingly about Wifredo Lam, Carmen Herrera, and why it’s important to look up.

At the opening, Fernández was introduced by Brooke Kamin Rapaport, senior curator of the Madison Square Park Conservancy, which organized the installation and is presenting it at the park. “In Fata Morgana,” said Rapaport, Fernández “has exploited the significance and mesmerizing presence of gold, both historically and locally, in the crowns of the skyscrapers surrounding Madison Square Park.”

The title of the work, said Fernández, “is a reference to a book by the same name that the Cuban artist Wifredo Lam illustrated in the 1940s. As a Cuban American child, I grew up knowing who Lam was from a very early age. I’ve always loved how Lam was described as seeming to be hiding images in plain sight.”

Fernández went on to add that “this kind of camouflaging of figures in the landscape” was an inspiration for Fata Morgana, which seems to “merge with the landscape, hiding people and their activities in its golden, distorted surfaces.”

The artist went on to link Fata Morgana with larger issues. “Landscapes, places, cities, communities are not just about what you see, but what you don’t see,” she said, adding that she has always been interested in noting “how something can, for example, be massive in scale or in numbers, but disappear entirely—or become omitted, or out of view, or even erased.”

The previous day, she said, “I had the great honor of celebrating the incredibly talented artist Carmen Herrera on the occasion of her one hundredth birthday. She’s lived in the cosmopolitan centers of Havana, Paris, and New York, and knew Lam, and Barnett Newman, and Yves Klein. She was everywhere and knew everyone. But her work was nevertheless made invisible.

“Like many of her generation she was made invisible, first, because she was a woman, and then doubly invisible for being a Hispanic immigrant—often excluded from all but the Latin American exhibitions, even though she’s lived most of her adult life in New York City, just a few blocks from here.”

“So we ask ourselves how is it that something can exist in plain view and still be invisible? Sometimes we have to squint really hard and remind ourselves that looking is not a passive activity, but rather an informed choice. I make public art because I’m interested in democratic, visible spaces with an element of unpredictability, where people can decide how to participate in art.”

Fernández went on to thank the many people involved in making Fata Morgana a reality, ending with thanks to her children, “whose encouragement and support was a daily reminder to me of why it was so important to light up a park path with a golden glow that makes people look up.”

Fata Morgana is open to the public whenever Madison Square Park is open. It will remain on view through winter 2015–2016.