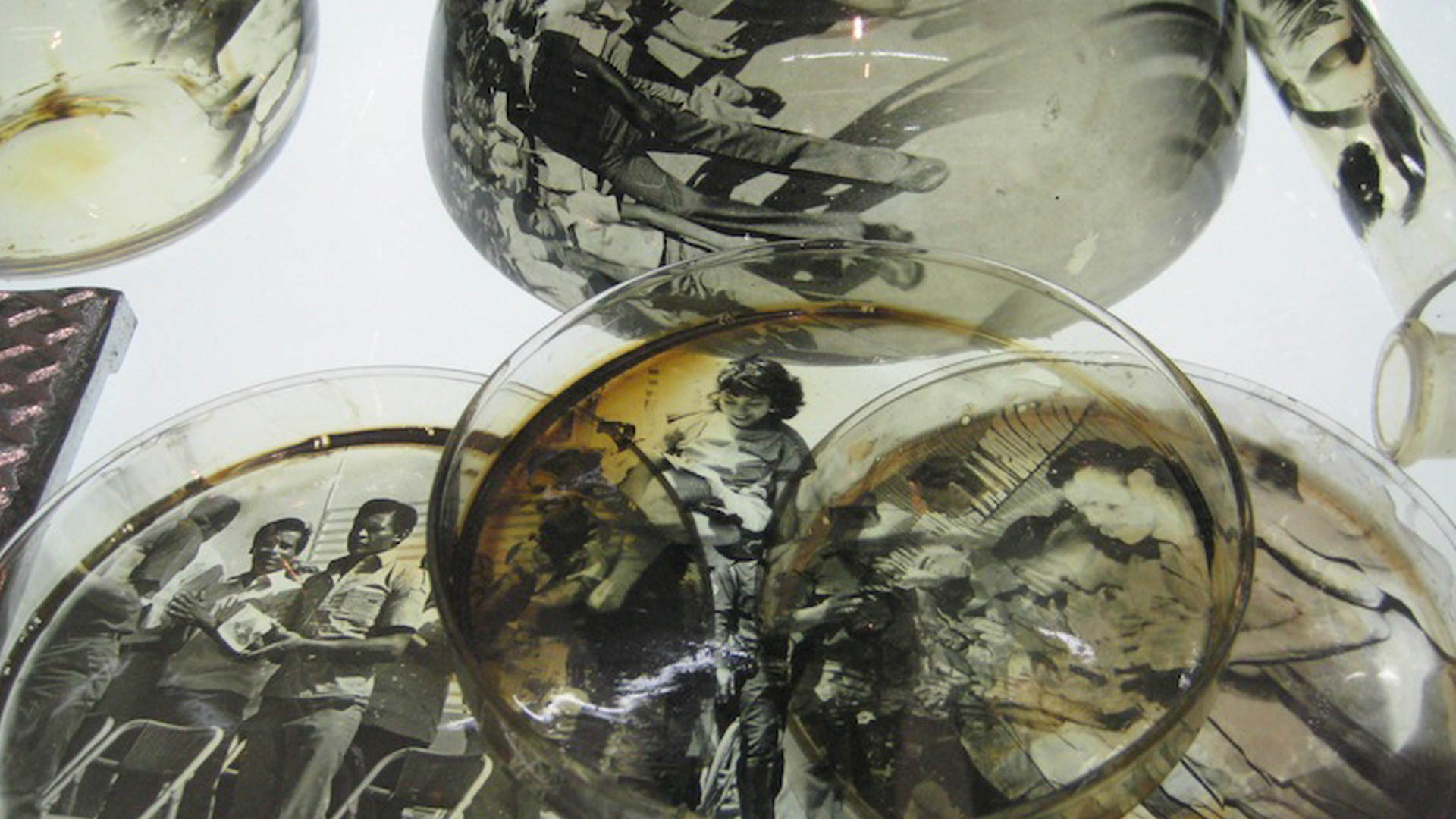 “I always start by analyzing the surroundings,” Yoan Capote tells the crowd gathered for a pre-opening talk at Jack Shainman Gallery. “And normally writing titles. I start with titles and readings, so the piece has a background.”

Opening late last month, Capote’s second show at Jack Shainman Gallery fills both of the gallery’s Chelsea locations, with works that probe the individual’s relationship to his or her society.

While his perspective is Cuban, Capote’s influences are international. He decided to title the show Collective Unconscious—a term coined by Carl Jung to describe a part of the mind shared by all human beings—as a tribute to the Swiss psychologist. “I was very influenced by Carl Jung, after I started to investigate his writings,” Capote told the group. “I found a lot of inspiration in his texts.”

Here are several of the works in the show, with Capote’s comments.

Of Abuse of Power, 2013, Capote remarked, “I like to do an intervention, putting a handcuff on a tree. The tree is one of the more pure, spiritual elements in nature. The Afro-Cuban religion of Palo Monte thinks that trees have entities of the soul. I was talking to friends who are Palo Monte, and I decided to do this action. I made a mold of this branch, and in the lost wax process I had the opportunity to submit this tree that was so strong. I use the cast bronze as a metaphor about indoctrination and manipulation.”

“The title of this piece, Dialogusfobia, is a term I invented. I saw there were so many phobias, and I said, What about the phobia of people having no communication? In Cuba and other countries, you have so many people with the fear of expressing what they really think.

“So I took that idea, and also The Scream by Edvard Munch. I was thinking about the scream that some people have, which is silent—this fear of expression. So inside this minimal object I put a human throat. It’s minimal and organic and essentially about Edvard Munch and my own representation of this tension.”

“This is La ausencia (escuchando el vacío). One day, in a magazine, I read a sociologist saying that almost every Cuban family has an empty closet from someone who left the country. And I was sad about that, remembering that my mother had family that she never saw again. So I made an empty closet—very heavy, like a Richard Serra, in steel, and attached it to the wall.

When you look closely inside, you see that the hangers have the shape of Cuba. I made them in bronze, because that’s very heavy too. This piece is about sadness and loneliness. When you see an empty hanger in a closet, in a hotel or anywhere, it’s talking about absence. But it’s a presence, too.”

About Laboratorio, 2012, Capote said: “Since I was a kid, I used to go to collective events—it was part of the schedule for school. I took a lot of pictures, and that started me collecting the negatives of anonymous photographers—different moments of people together, from the Cuban Revolution until now. You can see people smiling, people happy, people sad.

All of them are in glass flasks that I collected from abandoned factories and sugar cane factories. And from them I created a laboratory experiment,” which he has frequently likened to a failed social experiment.

Of Imanencia (Immanence), 2015, Capote said: “I understood that I had to do a piece that could have more meanings and be more controversial—as controversial as Fidel himself. He is a symbol of duality and of mobility. So I was thinking to do a piece that is a representation of society and could be interpreted in different ways.

“I went to different houses in Cuba and brought new hinges that I bought, and asked the people in the houses to give me one old hinge in exchange for a new one. This was a symbolic process, and I wanted to show it. So I did it on film.

“I did this with about 2,000 houses. After that, I started to receive donations. With about 3,000 hinges I was ready to make a piece: a portrait of Fidel Castro that was created, from the hinges of Cuban society.

“This is a very open-to-interpretation piece. As a Cuban artist living nowadays, I realized that what was interesting for me was to do a piece that could have different interpretations. One of them, of course, is about this direct relationship of the leader and society, and how the leader is created by society and the society’s way of life.

“Of course, I was working on this piece with the idea of “collective unconscious.” And Fidel is the main archetype of Cuba. Wherever I go, I get into a taxi, and it’s ‘Cuban! Fidel Castro! What is going to happen?’

“I started to think: Let me do a piece that talks about this axis, this needle point, this limbo that Cuba is living in right now. Because the Fidel image is, for Cuba still—from my point of view—the beginning and the end. It’s the middle point. It’s an axis.

“The first title of the piece was Archetype. After I did the piece, I gave it a title that was more poetic.

“When you come from the idea to the object, the object is never-ending. Because a lot of thinking has already been done. That’s why, when I start with the title and the readings, the object can offer so many solutions. The materials I work with depend on the term I’m using or the feeling I want to express.

“That’s the way I work. First is the idea, the feeling I want to express. And after that, the object.”

For more images of the show, see the photo album on the Cuban Art News Facebook page.