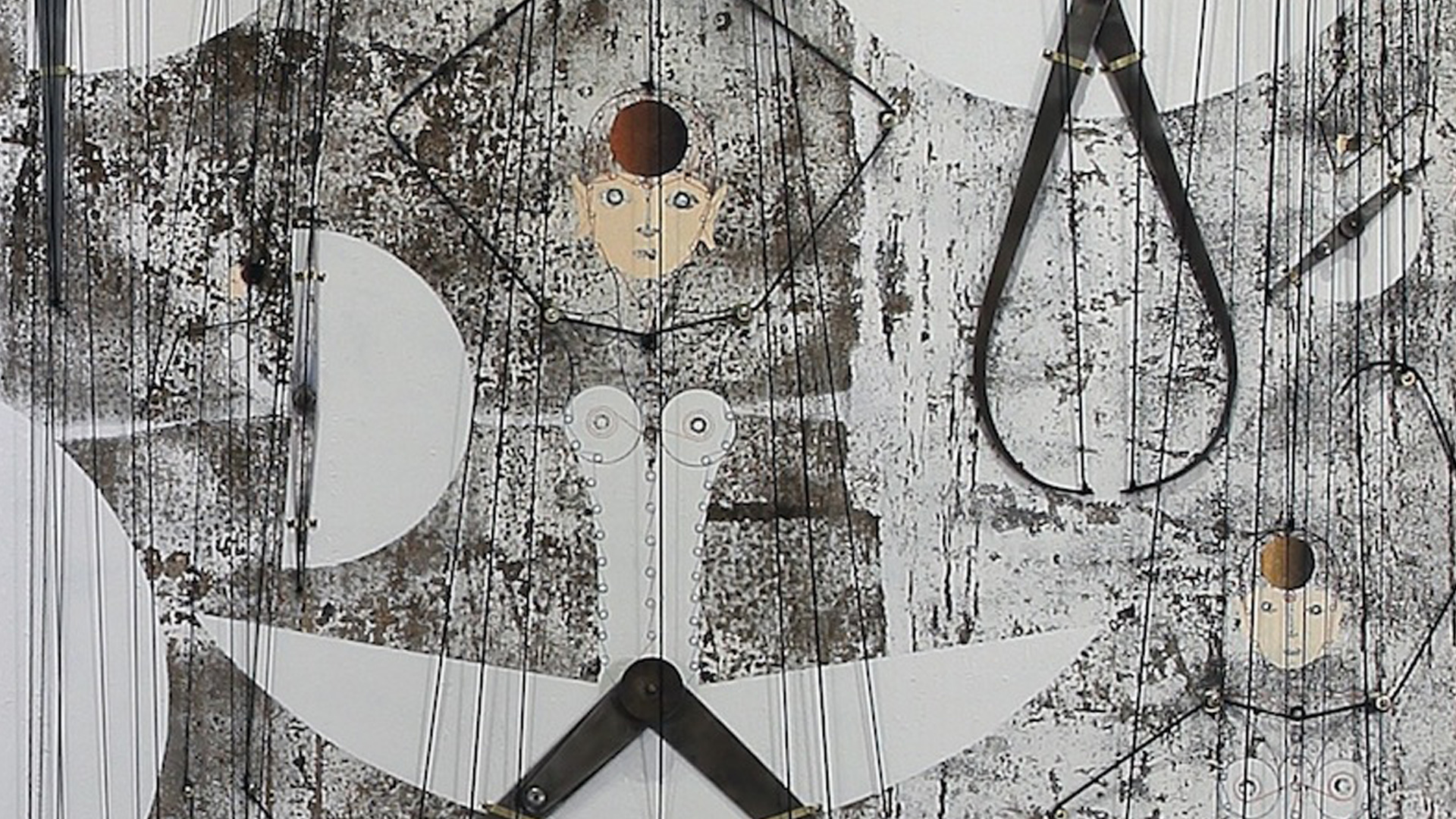 In an email interview, Carlos Estévez talks about his work in Reliquaries—his show at Pan American Art Projects, and the first of four solo shows he’s opening this year—and about time, scale, tin soldiers, and collecting stuff.

What’s the concept behind the work in Reliquaries?

This project is inspired by religious containers called reliquaries. Widely used in the Middle Ages, reliquaries held sacred objects, which usually consisted of the remains of saints or their personal effects. In fact, the word relic comes from the Latin reliquiae, meaning “remains” or “something left behind.” Many still use reliquaries for veneration, as a tangible memorial for a given saint and as an outlet for the saint’s power.

I have transferred the idea of reliquaries to art by creating works that contain the “remains of the artist.” Instead of physical remains, these reliquaries contain spiritual remains. They are containers of symbols, memories, dreams, and thoughts.

The universe has no inherent meaning. People create their own meanings and incorporate them into the world. The mission of human beings is to fill the gaps and emptiness in the universe. The mission of an artist is to become an interpreter of the spirit of the time and to transmit that message to others.

This exhibition is composed of 12 assemblages in boxes, each of which has its own history. What I am, what I do, what I feel, and what I think are encrypted in my reliquaries.

Could you talk a bit about the sense of scale, and the ways in which it’s a factor in the work? For instance, how large is the biggest work in the show, and how small is the tiniest element?

The scale is connected with each work individually. Each piece has it own requirement. The largest in the show (Sempiternal Ballet Rehearsal) is 10 feet by 16 by 2. It is a big theater with a corps de ballet. The ballerinas idea began with a compass-caliper that I found at a flea market. So, the size of the theater is in proportion to the ballerinas.

The smallest work is 6 1/2 inches by 3 1/4 by 1, and its title is Facetime. I made this work for my son. Facetime is an iPhone app that allows us to see each other’s faces when people are talking. From that I got the idea that any time my son sees the piece he will remember me. The work is small because it is very personal and intimate.

How is the work a continuation of the themes and motifs you’ve been exploring in your previous work? How is it a departure?

My work is always going to be a continuation of previous stories because is somehow what I am, but every body of works is a new beginning.

In 2012, you had a show at Pan American that included sculptures based on found objects, with a slightly surreal, slightly dangerous edge—an electric fan with knives for blades, for instance, and an old-fashioned Teléfono para noticias dificiles (Telephone for difficult news) with a shower-head instead of a receiver. Do you see those object works as relevant to these new pieces?

I have always been interested in objects. They contain a valuable information about humans beings, ideas, dreams, and needs. Working with found objects is for me a way to be part of the objects’ stories and when I used them, they become part of my own stories. In these new works I use some found objects combined with the ones I created.

Time and vision are themes that appear in more than one of the works in the show. Could you talk a bit about some of the other themes?

All the works have in common the subject of the invisible world. The world of filings, dreams, and ideas. At this point the viewer sees  a new universe in his or her interpretations. Time also plays an important role because it is the frame where our existence happens.

Pieces like Timepiece, Batallas interiores (Inner Battles), and Tiny Time Ballet are quite intricate. With works like these, do you sketch or otherwise plan the design before you begin the construction? Is there an image in your head, or perhaps a found object, that inspires the work? How much do you use chance or random juxtaposition as an element in the process (if at all)?

I wanted to represent the inner conflicts of a human being and I used a battle as a metaphor. The piece has three sections and a drawer. The left section is a door that contains buildings; they represent a city. The right section is door that contains tin soldiers; they defend or conquer the city. In the center are two big circles that represent the dynamic between the city and the soldiers. Inside the drawer there is a collection of threads in different colors. They represent the different directions and choices we make in the path of life. Over the drawer there is a telar, a loom, to symbolically process the threads that are connected to the circles at the center of the piece.

Are you continuing to make box pieces, or has this work taken you in another direction?

Yes, I am in a very productive and creative period of my life. I have a lot of ideas for new boxes. I am very excited about this new project I have in mind.

Is there anything else you’d like us to know?

I would like to invite you to see the show at Pan American Art Projects till April 25.

Also, I have a show running in Zurich [at Havana Galerie] till May 30 and two more upcoming: one in Lima, Peru in the spring and another at the Frost Art Museum in Miami in the fall.

Congratulations on a very productive year.