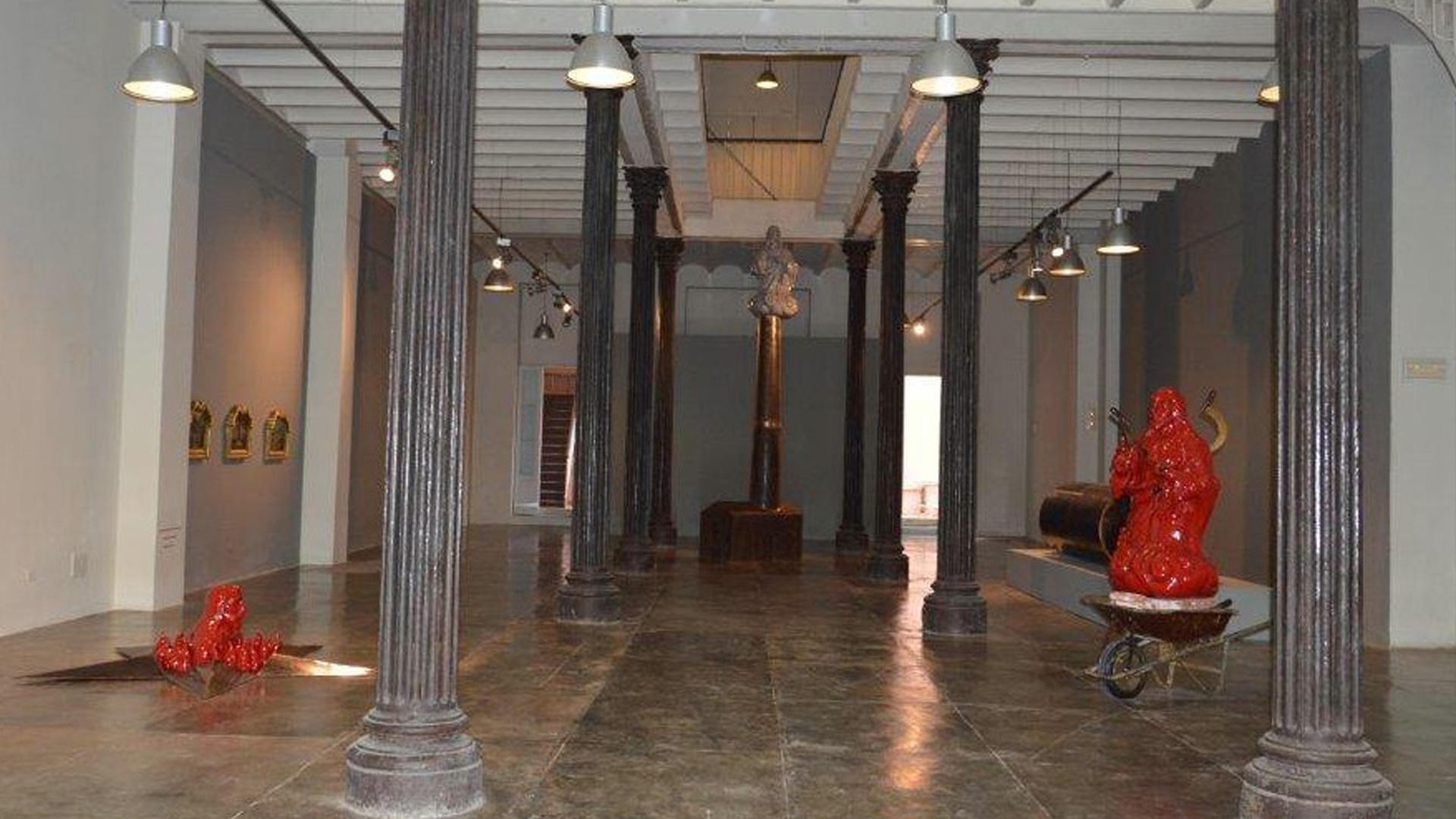 Bienal Takes Shape. The curatorial concept for the 12th Bienal de La Habana has been announced, along with the artists invited to participate. Under the theme Entre la idea y la experiencia (Between the Idea and the Experience), this year’s edition forsakes the usual central exhibition area in favor of a decentralized approach that sends Bienal visitors into neighborhoods around Havana for performances, events, and other experiences that encourage intersections of art with dance, theater, music, cinema, and literature. More than two dozen Cuban artists have been invited to participate, including Glenda León, Esterio Segura, Lázaro Saavedra, Elizabet Creviño, and Nestor Siré. Invited foreign artists include Anish Kapoor, Michelangelo Pistoletto, and performance artist Tino Sehgal. The Bienal runs May 22–June 22.

Galería Arte-Facto opens in Havana. This past Wednesday saw the debut of Arte-Facto, a new gallery in Vedado focusing on design, which opened under the auspices of the Fondo Cubano de Bienes Culturales. The inaugural show, Sin móvil aparente—a punning title that could translate as “Without Apparent Motive” or “Without Mobile Phone”—presents posters by eleven contemporary graphic designers. On view through April 15.

Belgian Contemporary Art at the MNBA. Earlier this month, the Museo Nacional de Bellas Artes in Havana welcomed The Importance of Being…, a show of 40 contemporary artists working in Belgium. Including Belgian-born artists and others working in the country, the exhibition raises questions about Belgian identity and its multilingual, transnational character. The featured artists include Francis Alÿs, Chantal Ackerman, and Wim Delvoye. On view through April 26.

Occidente Tropical. Esterio Segura in Havana. Closing soon at Factoría Habana, Segura’s solo show revisits the artist’s early work for insights into Cuban culture in the 1980s and 1990s. A mix of religion, politics, philosophy, history, anthropology, and a healthy dose of kitsch, the exhibition also traces Segura’s growing interest in sculpture. On view through this Sunday, February 22.

Aires de Cuba in Tenerife. In celebration of the “new winds” blowing through the island since December, this group show presents the work of half a dozen artists or groups, including Manuel Mendive, Santiago Rodríguez Olazábal, René Peña, The-Merger, Jairo Alfonso, and Maykel Linares. On view at Galería de Arte Artizar through March 21.

Drapetomanía at Harvard. The well-traveled exhibition—which debuted almost two years ago in Santiago de Cuba—is now on view at the Ethelbert Cooper Gallery for African and African American Art at Harvard University. The show’s curator, Alejandro de la Fuente, is director of the Afro-Latin American Research Institute at the university. The show’s opening was attended by Ambassador Jeffrey DeLaurentis, Chief of Mission at the U.S. Interests Section in Havana. Drapetomanía: Grupo Antillano and the Art of Afro-Cuba runs through May 29.

Cuban Culture Festival in NYC.  This city-wide event, presented under the aegis of the American Friends of the Ludwig Foundation Cuba (AFLFC), kicks off tonight with a concert at the Americas Society by the award-winning classical pianist Willanny Darias. More events are scheduled throughout the spring, including a return engagement by MalPaso Dance Company at the Joyce Theater, March 3­–8. Other upcoming events include the film series Cuba: Golden 60s at the BAMcinématek, March 20–31, and concerts by Arturo O’Farrill and the Afro Latin Jazz Orchestra in May.

Transitions at New York City Center. The dance show Havana Rakatan ended its run this past Sunday, but the “A Bailar” performance series continues—and with it, Transitions: A Snapshot of Contemporary Cuban & Cuban-American Art. Presented in the building’s Grand Tier Lobby, the show features work by Alexandre Arrechea, Glenda León, Roberto Diago, Leslie Sardinias, and Emilio Pérez, whose 40-foot-long abstract painting, Footprints on the Ceiling, is somehow right at home with the Moorish-style décor. On view through March 9.

Roberto Diago and Abstraction in Miami. Pan American Art Projects has started the year with a double header: a solo show of work by Roberto Diago and an international survey of modern and contemporary abstraction. In recent years, Diago’s exploration of racism and Afro-Cuban culture has turned toward abstraction, with a focus on surface and texture; the group show sets individual works in dialogue with each other—a work by Frank Stella in juxtaposition with one by Luis Cruz Azaceta, for instance. In the gallery’s project room, a selection of abstract work by Cuban artists, including Raúl Martínez, Hugo Consuegra, and Guido Llinás, complement the exhibitions. The shows close this Sunday, February 28.

Contemporary photography, too. This past weekend saw the opening of a new show at the Cuban American Phototheque. Cuatro veces cuatro (Four Times Four) presents the work of Nadal Antelmo, Néstor Arenas, José Luis Díaz Montero, and Daylene Rodríguez Moreno—four artists, who, the curators, say, transcend the cliché of documentary photography to explore further possibilities of the medium, whether technical or conceptual.

Cuban Indie Film in Miami. Thanks to our friends at the Cinelandia website for first alerting us to the “Emerging Cuban Independent Film Series,” a pre-festival warm-up ahead of the 32nd Miami International Film Festival. Showcasing the work of four young filmmakers—Jessica Rodríguez, Marcel Beltrán, Carlos Machado Quintela, and Claudia Calviño—the series includes five programs of short films, screening this Saturday, February 28 through March 4. The festival itself includes a tribute to the island’s indefatigable independent filmmakers: a special event slated for Sunday evening, March 8, followed immediately by a screening of Quintela’s indie feature, La Obra del siglo (Project of the Century), and an on-stage after-screening party. And independent producer Calviño will present her recent award-winning film, Hotel Nueva Isla, on Thursday, March 12.

Carlos Acosta in Havana. In the UK, the Critics’ Circle National Dance Awards recognized ballet star Carlos Acosta with the De Valois Award for Outstanding Achievement, in recognition of his distinguished career as a dancer and a producer of new work. Word has it that he will partner with Cuban National Ballet prima ballerina Viengsay Valdés in a new production to premiere during the 12 Bienal de la Habana.

Curatorial Travel Award. Curators looking to conduct research in Central America and the Caribbean have until April 1 to submit applications for the Colección Patricia Phelps de Cisneros Travel Award. Now in its fourth iteration, the award supports a contemporary art curator from anywhere in the world to travel to Central America and the Caribbean for research on art and cultural activities. The period covered can range from three weeks to three months, and must take place between May and November 2015. The grant covers costs up to $10,000. A minimum of three years of curatorial experience is required. For details and an application, see the link at Independent Curators Incorporated, which administers the program.