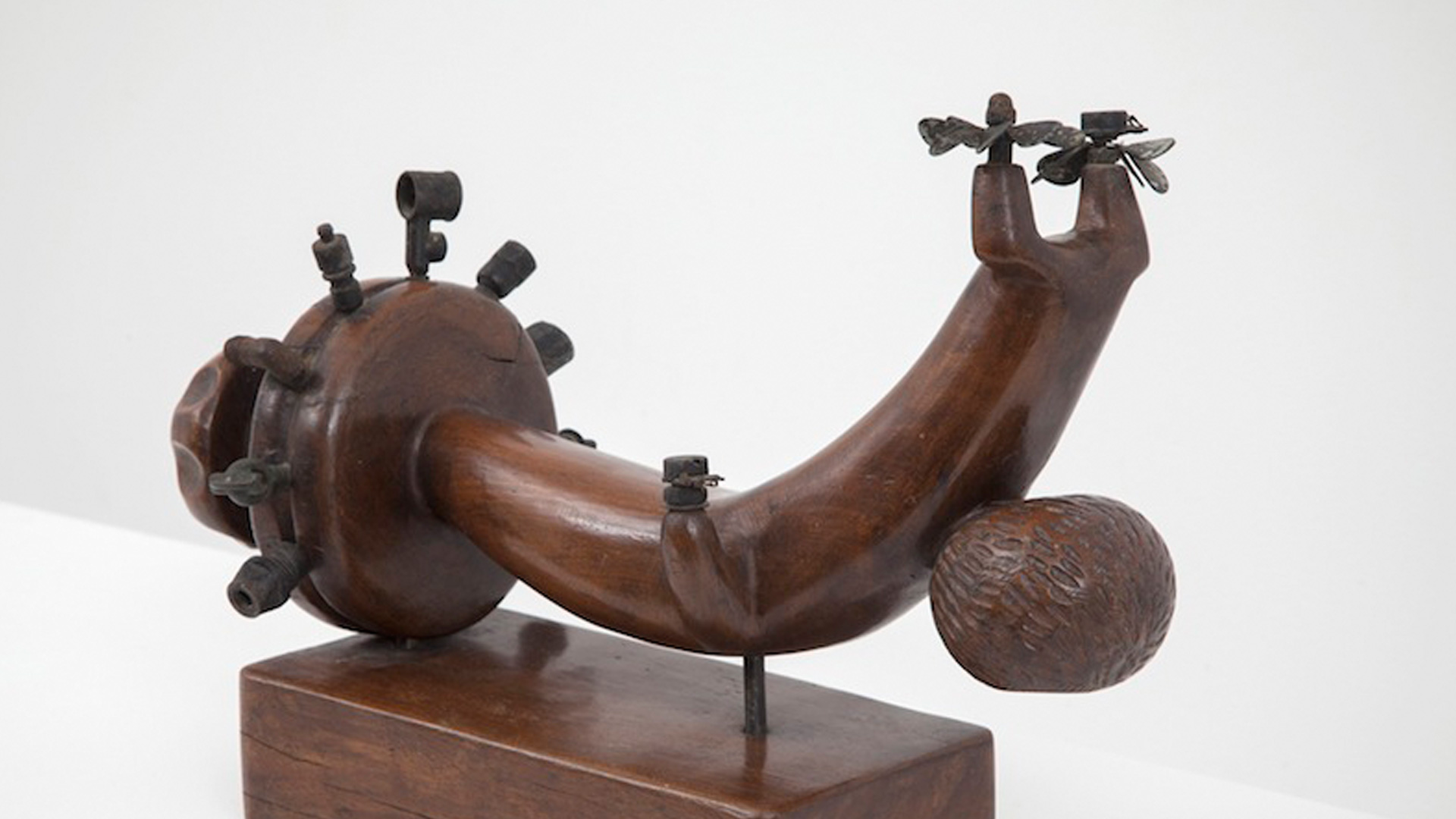 In 2013, Alejandro de la Fuente organized the exhibition Drapetomanía: Exposición Homenaje a Grupo Antillano, about an Afro-Cuban cultural movement that thrived in the late 1970s and early 1980s. Here, de la Fuente writes movingly of one of the group’s founding members, sculptor Marcos Rogelio Rodríguez Cobas, who passed away in early December.

With him, it was never in doubt: his inspiration, materials, artistic language, the very purpose of his work, were all anchored in the rich, inexhaustible reservoir of Afro-Cuban culture. Quite appropriately, because Afro-Cuban culture has always traveled through the wavebands of informality, the news of his death arrived like a whisper, a rumor disseminated by friends and admirers, short on details, lacking official confirmation: Marcos Rogelio Rodríguez Cobas, the great master of Afro-Cuban art, one of the island’s most prolific and important sculptors of the last five decades, has passed away. He was 89 years old.

Born in Santiago de Cuba in 1925, Cobas began his work in the 1950s, after graduating from the Escuela Nacional de Artes Plásticas San Alejandro in Havana in 1951. By his own account, it was toward the end of that decade that he began to seriously study Afro-Cuban religions and Afro-Cuban cultures as sources of inspiration for his work. After the 1960s he turned to wood as his most important medium, a conscious choice that reflected a personal quest to link his art with African and Afro-Caribbean diasporic traditions. “Of all the materials used in sculpture,” Cobas explained in 1981, “I think wood is the best for my clearly Latin-African expressions… in the jungles, inhabited by my not-too-distant ancestors, the tree is the origin of everything that surrounds man… my art is motivated by my ethnic condition.”

This “motivation” would become the signature of Cobas’s mature work, even though in the 1970s cultural authorities perceived Afro-Cuban popular religions as obscurantist relics that were basically incompatible with a new, modern, and technically sophisticated socialist society. Like other artists committed to Afro-Cuban culture at the time, Cobas learned to disguise his religious and cultural sympathies in pieces that, to paraphrase Jamaican-Nigerian writer Carlton Lindsay Barrett, did “not depict and yet totally and effectively expressed” the power and beauty of the Yoruba deities. His magical realist, majestic totemic sculptures from this period owed much to Agustín Cárdenas, and some of the pieces were clearly conceived as tributes to Wifredo Lam.

In 1978 Cobas became a founding member of Grupo Antillano (1978–1983), a visual arts group founded by sculptor and engraver Rafael Queneditt Morales that quickly became a vibrant, multifaceted Afro-Cuban cultural movement. These were active and productive years, as Grupo Antillano organized 32 exhibitions between 1978 and 1982. These were also years of fruitful collaboration with Lam, who became the mentor and “honorary president” of the group, participating personally in several exhibitions with them.

Lam became an admirer of Cobas during the years of Grupo Antillano, something that the latter always recalled with great pride. By this time he was transiting into a new and particularly creative period, one characterized by sculptures that combined wood and industrial metal parts (screws, bolts, nuts, small propellers) into odd, contradictory, postmodern mechanisms that he frequently labeled “satellites” or “machines.” I think Cobas was trying to remind us that modernity was, in the final analysis, created by Africans, by their ingenuity and labor, and that the technological quests of today are a timeless feature of the human existence.

Cobas’s pieces are in several museums and collections around the world, although not in the Museo Nacional de Bellas Artes in Havana. In 2013, the Caguayo Foundation for the Applied and Monumental Arts awarded Cobas its most important prize, the Premio Crecemos, for a lifetime devoted to excellence in sculpture and the arts. He received the award at his modest studio in Old Havana, the place where he did so much of his work, from the hands of two fellow Grupo Antillano members: Alberto Lescay and Rafael Queneditt. Outside the studio hanged a rundown sign that, I hope, will not be taken down. It simply states: “Cobas Escultor.”