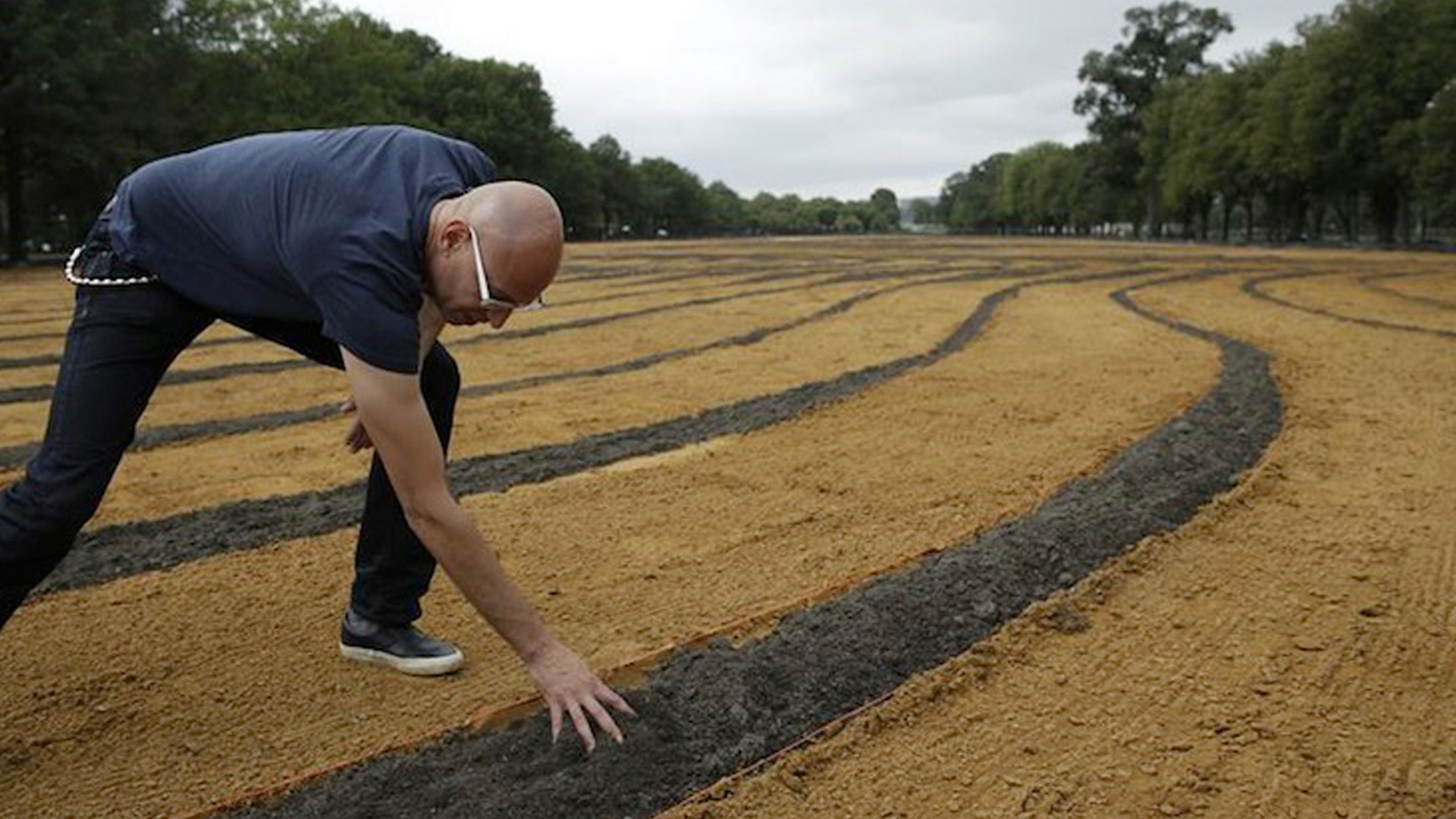 As our U.S. readers celebrate the Thanskgiving holiday weekend, we look back at a work of “land art” that Cuban-born artist Jorge Rodríguez-Gerada created in the nation’s capital, a composite portrait that he calls “a celebration of diversity.”

Titled Out of Many, One—a translation of the Latin phrase e pluribus unum—the enormous portrait was a joint project of the National Portrait Gallery and the National Parks Service, which maintains the National Mall. The portrait combines the features of some 30 young men of different ethnic backgrounds, whom Rodríguez-Gerada met and photographed while walking the Mall.

The massive earthwork required 2,000 tons of sand, which formed the portrait’s base layer, and 800 tons of soil to create the darker lines. Using high-accuracy satellite topography technology, construction workers were able to position 10,000 wooden pegs (and several miles of twine) to outline the portrait. Workers and volunteers filled in the spaces according to the plan, like a paint-by-numbers project on a huge scale.

The image was fully visible only from very high up—from an airplane, or from the top of the nearby Washington Monument. Visitors were able to walk through the portrait itself, experiencing what Rodríguez-Gerada called the “Zen garden feel” and the textures of the raked sand and soil.

“I think every artist, especially a portrait artist, has a little bit of themselves in everything they do,” says Rodríguez-Gerada, “and this one, most likely a little bit more, because it’s also my story.” The 48-year-old artist came from Cuba to the United States as a three-year-old and grew up in New Jersey. Some of his earliest art consisted of illegal “interventions” on advertising billboards, an ironic contrast to his current, highly official project.

Taína Caragol, a curator at the National Portrait Gallery, thinks of Rodríguez-Gerada’s project as “land art of the 21st century.” As an ephemeral artwork, she says, Out of Many, One “goes against the tradition of portraiture, which is a genre used to memorialize people.”

Out of Many, One was on view at the National Mall only during the month of October. After that, the sand and soil were plowed up to become the base for a grass-covered sports field. But thanks to satellite photography, Rodríguez-Gerada’s haunting face, created out of many, lives on.

Here’s a 6-minute video about the project from the PBS “News Hour.”