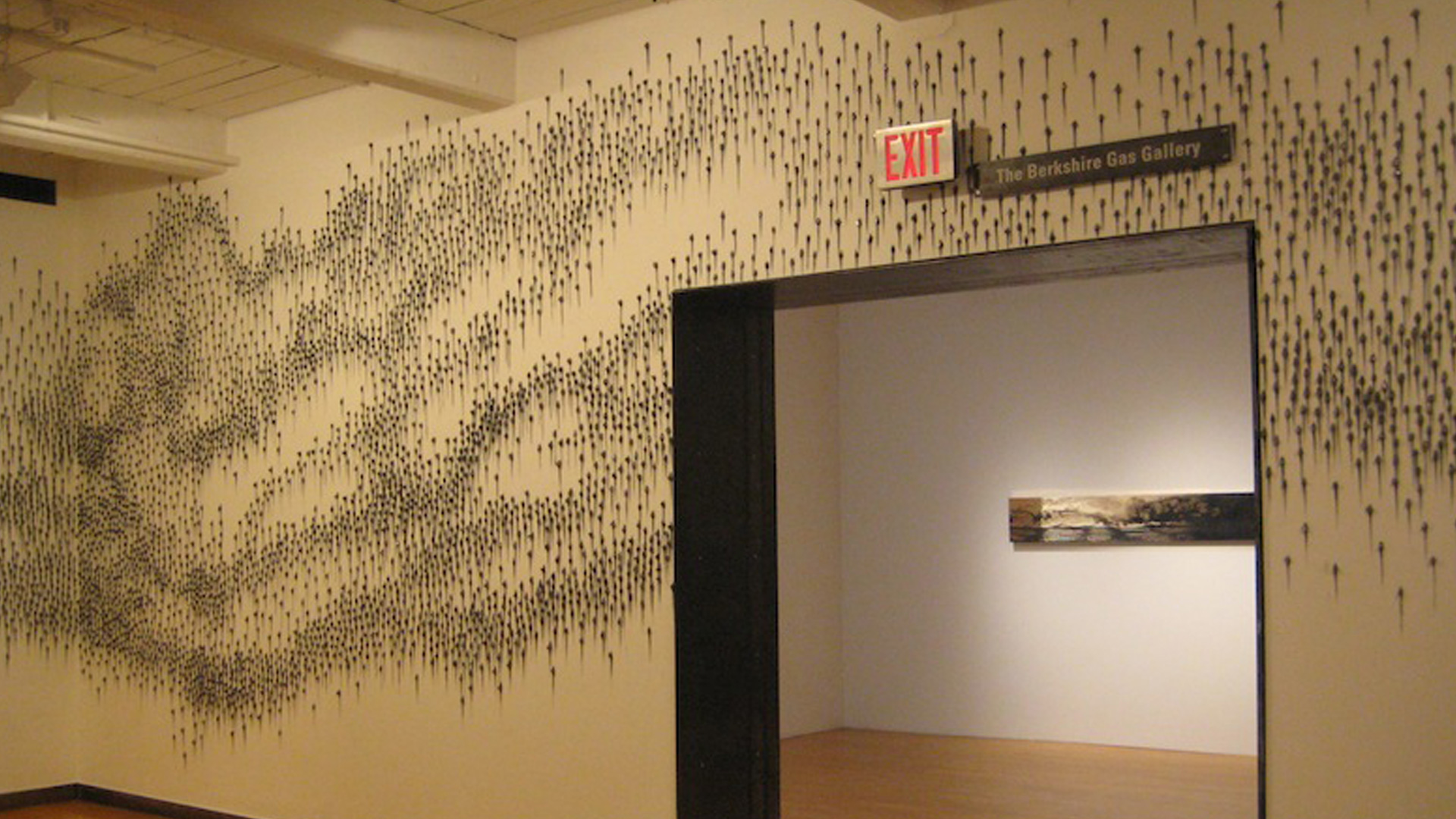 In her largest solo exhibition to date, Teresita Fernández fills the galleries of MASS MoCA with works that respond in various ways to the massive, light-filled spaces of the art center, housed in a 19th-century industrial complex. Here’s a quick photo walk-through of the exhibition, on view through March 2015.

Walking into the space, the viewer is greeted by the installation Sfumato (Epic), 2014. Composed of more than 30,000 coin-sized chunks of raw graphite—each with its own hand-drawn mark, like the tail of a miniature comet—the installation flows through the space. In the farther gallery, a portion of the installation Black Sun, 2014, is visible at the left; at the right is Golden (Obsidian Sky), 2014. The show features several works from Fernández’s “Golden” series: drawings in India ink on gold chrome panels, some of them enormous and others tiny. In a video interview, Fernández described this viewpoint of Golden (Obsidian Sky) as “almost like looking at a scene, a landscape vista from a distance.”

Sfumato (Epic) flows over the walls of its gallery, turning corners and disregarding interruptions by signage. In the interview, Fernández spoke of wanting to explore the “recurring connection” between the very large and the very small, “where the very tiny, miniature, intimate experience was actually present in the vast, panoramic landscape. And that immense, panoramic landscape became really present in the tiny little gesture. I was very interested in that reciprocity.”

A partial view of Golden (Scroll 1), 2014, is visible through the doorway.

The central space of another, smaller gallery, is claimed by Rorschach, 2014, a sculpture made of gold chroming, fused nylon, and aluminum. In her essay on the exhibition, curator Denise Markonish, described Rorschach as having “a terrain like mountains with water smoothly pooling in the center and flowing down its sides. Fernández de-materializes the work, turning it into something like a three-dimensional Rorschach inkblot, the two sides of the work mirroring one another and meeting in the middle.”

On the far wall is Golden (Lamp Black), 2014, one of the smallest of the show’s “Golden” series works. Speaking of her first reaction to the space of MASS MoCA, Fernández recalled that “almost immediately” she decided that she “wanted to make a show about the miniature. Precisely because it seemed like the cliché was to do something big.”

Another view of Rorschach. In the alcove is Golden (As Above So Below), 2014. The phrase “as above so below” came from the Vedas, the ancient scriptures of Hinduism; Fernández chose it as the show’s title because “without saying much, it spoke of scale, but it also spoke about landscape. And the notion of “As above so below” became almost like that horizon line in landscape for me.”

Perhaps the most widely photographed work in the show is Black Sun, 2014, which occupies more than half of a large, triple-height gallery. Curator Denise Markonish has written that “Black Sun evokes an amplified, glowing cloud cover when viewed from the gallery floor. When observed from the two mezzanine balconies above, the same elements become landscapes.”

Installed along a wall of windows facing the street, Fernández’s Lunar (Theatre), 2014, takes advantage of the constantly shifting light. A gold-finished, 800-square-foot platform holds more than 1,500 pounds of tiny glass beads. Like the rest of the exhibition, Lunar (Theatre) is “meant to be seen by moving,” Fernández explained in the interview, “in the sense that all of those vistas emerge, and develop, and appear and disappear, dissolve and materialize.” The show, she said, “almost creates its own landscape. But it’s created by that ambulatory viewer who’s stringing together these small moments.”

Teresita Fernández: As Above So Below runs through March 2015 at MASS MoCA in North Adams, Massachusetts.