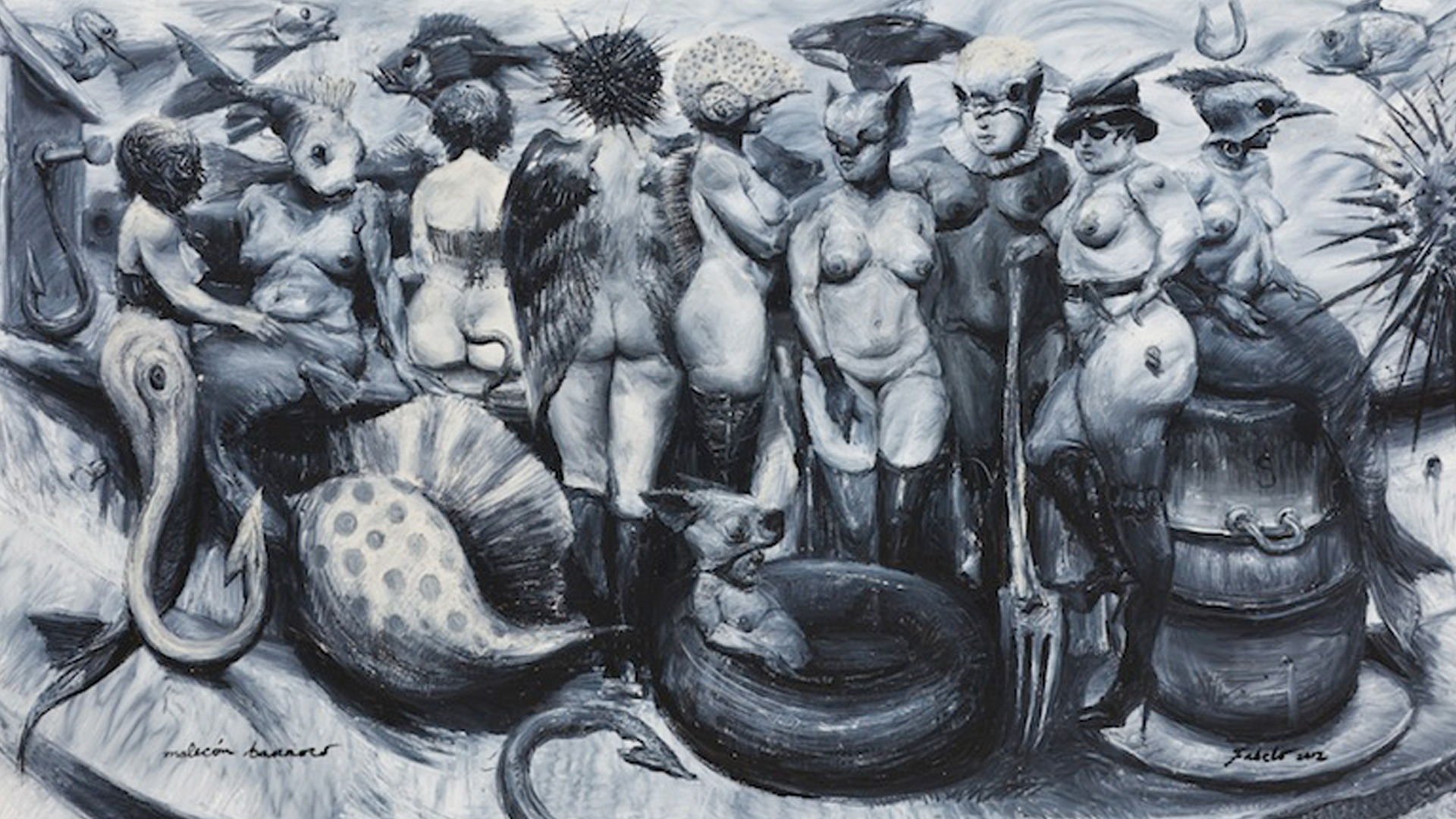 Last month saw the opening of Fabelo’s Anatomy, Roberto Fabelo’s first solo exhibition in a U.S. museum. In a brief email interview, the artist talks about the show, the Malecón as a subject in his work, and what it’s like to use an antique book as the basis of his art.

“Fabelo’s Anatomy” is your first solo museum exhibition in the U. S. How did it come about?

In the past two years, Mr. Stuart Ashman, director of the Museum of Latin American Art (MOLAA) in Los Angeles visited my studio in Havana, led by the hand of the restless curator Juan Delgado Calzadilla.

Mr. Ashman, very sensitive and interested in art and its promotion, suggested a show of my work in the museum. A magnificent curatorial and museum design team conceived the show’s excellent presentation, which I appreciate very much.

Many of the works in the show are ink drawings on the pages of an old anatomy text. How did you arrive at this combination of mediums? And why this book in particular? Did the information in the book somehow inspire or suggest the drawings?

The heart of the show is the set of drawings created in the last three years on the texts and diagrams of an anatomy book that had served as a textbook for medical study in the 19th and 20th centuries: Tratado de Anatomía Humana by Leo Testut.

By chance I found a page from that book with a diagram of the tongue, and I drew on the image, creating a new one. The scientific description of that organ was already a beautiful picture and to scribble it was almost a sacrilege, but I couldn´t restrain my vice of drawing on any surface in whatever location and condition.

Dr. Juan Carlos Collado, a great oncological surgeon and a close friend, saw the picture and offered me the two volumes of the book that he owned. So I had at my disposal the abundant pictures and diagrams they contained. To be honest, I felt somewhat guilty when I had to dismember the pages of this text, which is very old but still revered by many. But the suggestive power of those pages, with their torn and broken images, was stronger. They reminded me of my adventures as a graphic maniac, making the series “Fragmentos Vitales” (1984) on those random pieces of craft paper, which changed and enriched my vision of drawing and art.

In many drawings in the “Fabelo´s Anatomy” series, I’ve extracted a word or phrase of the text to serve as a title—which, decontextualized, has to my way of thinking become pure poetry.

Two of the works in the show, Contemplación de la perla en el muro del malecón and Malecón Barroco touch on similar themes and visual motifs. Could you comment briefly on these works?

Many Cuban artists and virtually all habaneros frequently refer to this mythical place in the city: majestic, familiar, provoking a range of different feelings, longings and hopes. The images in these works are done in a Baroque style, because in reality it’s the mix of humanity in this place that gives it its endless character and sensuality.

The press release for the show refers to you as “the contemporary Cuban Daumier.” Do you think that’s an accurate assessment?

I’m not used to evaluating or labeling my own work. I appreciate very much others’ reviews and assessments of it. In any case, to compare me with a giant like Daumier seems like an undeserved praise and an exaggeration.

I have looked at artists like Dürer, Goya, Doré, Daumier, and others that would make an endless list of influences. I’ve venerated them because they are sacred referents, and important contributors in the development of my artistic vision.

Fabelo’s Anatomy runs through September 28 at the Museum of Latin American Art in Long Beach, California.