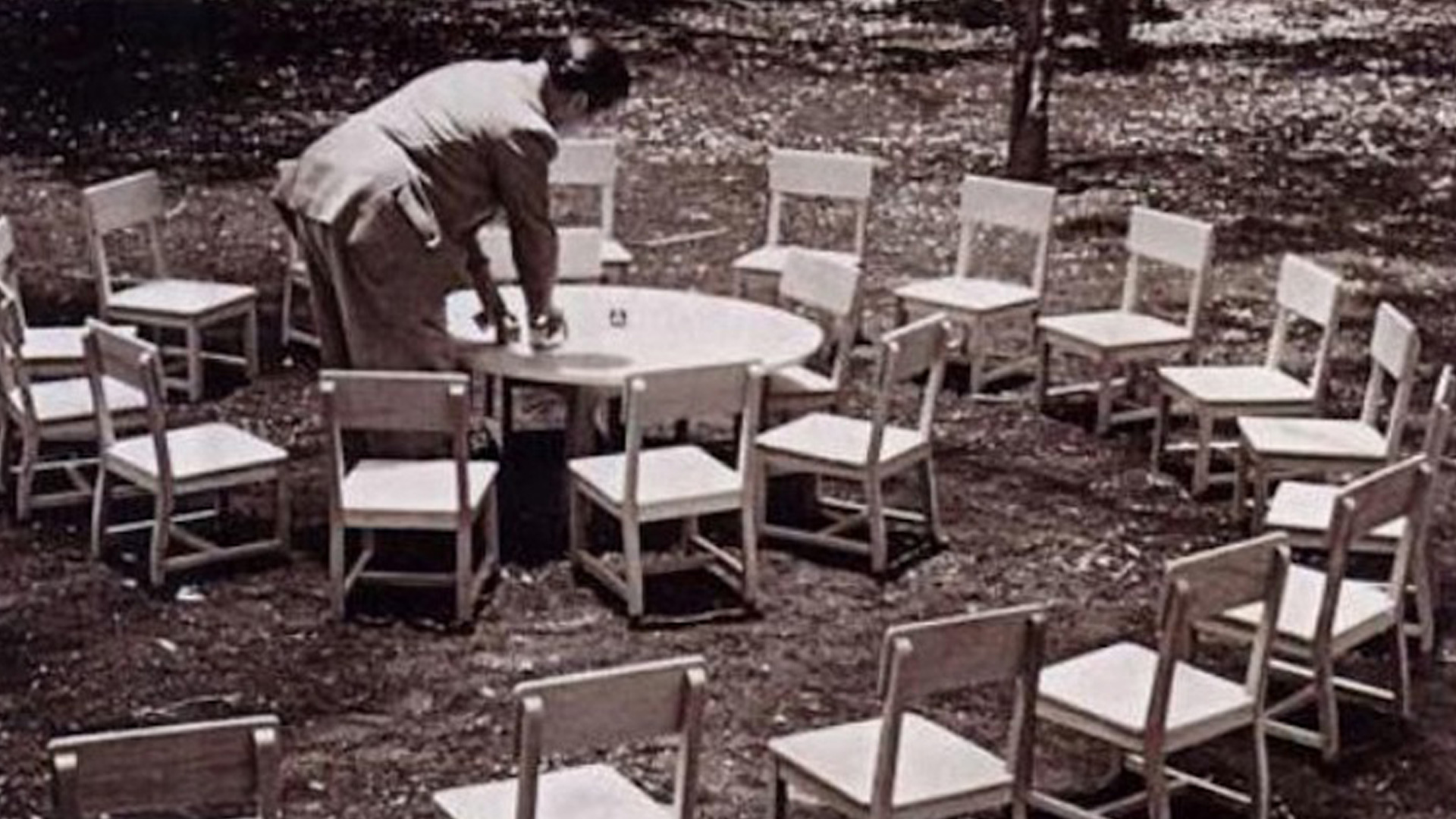 Clara María del Carmen Magdalena Porset y Dumás was born in Matanzas on May 25, 1895, and died in Mexico in 1981. She studied at the National School of Architecture in Paris and, by 1931 had devoted herself to furniture and interior design in Cuba. Her career eventually led her to the U.S, Mexico, and back to post-Revolutionary Cuba. Jorge R. Bermúdez, author of Clara Porset, Diseño y Cultura, talks to Cuban Art News about this little-known figure in Cuban culture.

How did you first come across Clara Porset?

I discovered Clara Porset while leafing through magazines such as Social, seeking information about Conrado Massaguer, an essential figure in 20th-century Cuban art and,graphic humor. Then, as a professor at the Polytechnic Institute of Design at the beginning of 1990, I traveled to Mexico to teach graphic design at Xochimilco University. There, thanks to Professor Oscar Salinas Flores, what had been a tentative search became a certainty. Oscar, now an architect, was Clara´s pupil at the University of Mexico.

In 1995, on the centenary of her birth, I wrote the first text on Clara to be published in Cuba, for the magazine Revolución y Cultura. When I finally wrote the book, Clara Porset. Diseño y Cultura, I did it from a Cuban perspective, with details of her work in Cuba.

Tell us a bit about Porset’s early life.

Clara belonged to a wealthy family, which enabled her to study abroad. But nothing in her training, in the cultural trends in Cuba at the time—or the traditional atmosphere of the Cuban family of the late 19th century—led her to an interest in design. Design was understood as a project, an activity relating to objects in human life that help form what José Martí called “the second nature of man.”

Clara arrived in Europe in the late 1920s, and she discovered the Bauhaus. Unfortunately, she came as Hitler and the National Socialists were lashing out at all avant-garde art and, of course, the experimental design of the Bauhaus. She met Walter Gropius and Hans Emil “Hannes” Meyer in this period, which saw the dissolution of this German school. But she recognized that it left behind a movement, a process of thought, a foundation of works made. It was a segment of industrial design that was very powerful, very conscious of what the true function of modern design really was. Clara arrived at a climactic moment, the peak of modern design’s development in Germany.

What happened when Porset went back to Cuba? How did she end up in Mexico?

She returned to Cuba and started writing for the magazine Social, founded in 1916 by Conrad Massaguer. Intellectuals such as Alejo Carpentier were contributors. Clara´s texts focused on different expressions of modern design: for example cinema façades, typography, stained glass, posters, et cetera. She realized it was like redesigning the world, giving a visual and functional identity to that epoch.

Clara was a leftist in a country repressed by the Machado dictatorship. She continued her correspondence with Gropius and Meyer. Gropius advised her to go to the United States to take a basic design course at Black Mountain College in North Carolina, which offered a coherent vision of modern design. Porset undertook a theoretical work on the tropical house. Hence, the title of the May 22, 1931, conference at the Auditorium of Havana: “Contemporary Interior Decoration: Its Adaptation to the Tropics.”

As the political situation in Cuba became explosive, Clara went to Mexico and settled there. She was dazzled by the creativity and quality of Mexican crafts, and she understood that there were many good, honest, traditional elements there that could be used in a functional modern design—in Mexico, in the U.S., and even in Cuba.

Clara was fortunate to arrive in Mexico as the design industry was developing. Industrial design in Latin America took off mainly in two countries: Mexico and Brazil. She began as a teacher and later joined up with leftist movements and the Mexican muralists. She was a friend of Diego Rivera and Frida Kahlo, and she married Xavier Guerrero, a Mexican muralist and member of the Communist Party.

Clara studied traditional crafts closely, and specialized in textiles. She valued furniture that reflected indigenous influences, especially with woven seats. She worked a lot with the design called butaque yucateco (Yucatan chair), which has an organic shape that I also compare with the dujo Taíno (a wooden chair of the Taíno people). The butaque chair today is very modern, but it’s part of the best tradition of Mexican furniture. Clara understood that our climate required that type of woven fabric seat.

How do tradition, pre-Hispanic culture, and modernity come together in Porset’s designs?

She knew firsthand the craftsmanship and design of pre-Hispanic culture in Mexico. She studied the furniture of the Totonac culture, the dujo Taíno, and she mastered the concept that an object should fulfill its function and thus be useful; if it did that, it was intrinsically beautiful.

She studied the butaque yucateco and of course made a synthesis, an analysis of the form, the structure, adapting it to the aesthetics of the modern world and the functions it would serve. She often used butaque designs as beach furniture, because she considered them more useful for outdoors. She conceived other furniture for indoors, and for workers’ apartments.

She also studied Cuban colonial furniture, primarily from the 19th century. That was when the island culture achieved a total organic style—an architecture, interior design, even a way of thinking—and a fully articulated, organic literature. Far from remaking or reinventing other furniture, Clara adapted traditional Cuban design in accord with new technological realities.

This selection and reinterpretation process required great cultural knowledge. She knew her objectives, and had many sources and references. She stylized, she removed superfluous elements, and she achieved maximum simplicity. She designed furniture and interiors that suited the Cuban architecture and climate. Everything that is well designed is permanent. She was able to represent the spirit of her time in a given object.

What was the scenario for Porset’s work in Revolutionary Cuba?

When Clara arrived in Cuba in 1960, Che Guevara was Minister of Industries. She received commissions from him. She designed furniture for the Camilo Cienfuegos School, the first teacher training school in the Sierra Maestra, and for the National Art School, whose buildings were created by the architects Ricardo Porro, Roberto Gottardi, and Vittorio Garatti. She also designed furnishings based on the best traditions of Cuban colonial furniture, with curved shapes, wicker work, and fabrics.

Her number-one priority was the founding in Cuba of a School of Industrial Design, in order to fulfill the Revolution’s goals in terms of housing. That required good furniture, since the political ideals of the Revolution were in keeping with the functionalist design principles of the time.

Clara wanted to learn about the programs of design schools in Eastern Europe, so she traveled to Poland, Moscow, and the German Democratic Republic. The Halle School, in Germany, was the one that matched her goals in Cuba. All of those intentions, however, remained unrealized. Che left the Ministry of Industries. There was also the problem of a location for the school, which required warehouses and workshops. The project could not be carried out.

She eventually returned to Mexico where, on the campus of the National Autonomous University of Mexico (UNAM), she founded a School of Industrial Design. Before her death, she established a scholarship fund that recognized the top woman student in each class. The library of the Faculty of Architecture was named in her honor.

The history of Cuban art is, unfortunately, the history of art, not design, It hasn’t done justice to design in general. Aside from the fact that, starting with the creation of the schools of industrial design and the inclusion of graphic design as a specialty in their curricula, design has not favored a comprehensive and consistent historical perspective.

Clara had an active relationship with writer Juan Marinello.

She understood what new design meant in improving the lives of major sectors of society. That led her to leftist thought in a key moment of Latin American intellectual life. The atmosphere that reigned in Latin America during that time was revolutionary, and the first political lines were being drawn for a new independence.

How can Porset´s legacy be spread in Cuba?

We’ve already begun to disseminate her work. Enrique Alonso, a young architect, has taken up and expanded my early research. Art critic Pedro Contreras, who recently died, also researched the furniture Clara made. Many lectures have been delivered at ISDI (Institute of Industrial Design), in the Casa de México. At ISDI, I proposed the creation of a chair named for Clara Porset, to spread her work. And the Wifredo Lam Center organized an exhibition of industrial design that included her furniture. From that first article in 1995, Clara´s legacy has grown and resonated.

How do you envision the future of Cuban industrial design?

The future is uncertain. There are good examples of contemporary interior design, but unfortunately, designers sometimes use concepts that are not in tune with Clara Porset’s in terms of the Cuban climate, culture, and social reality. Construction and architecture need to study our climate.

What research projects are you currently working on?

I’ve somehow plucked Conrado Massaguer from obscurity, and I used him to talk about Clara Porset. She inserted herself organically into Massaguer’s context and began to comment on interior design in his Social magazine. I also do research about poetry, in particular the Cuban-Puerto Rican poet Lola Rodríguez de Tió (1843-1924). This woman was a great romantic poet, closely linked to Cuban history.

These people have to be rescued from oblivion. We owe them that: to rescue the best of that legacy. To return to that legacy is a way to create, to take it to heart. For that reason, we must love what we do.