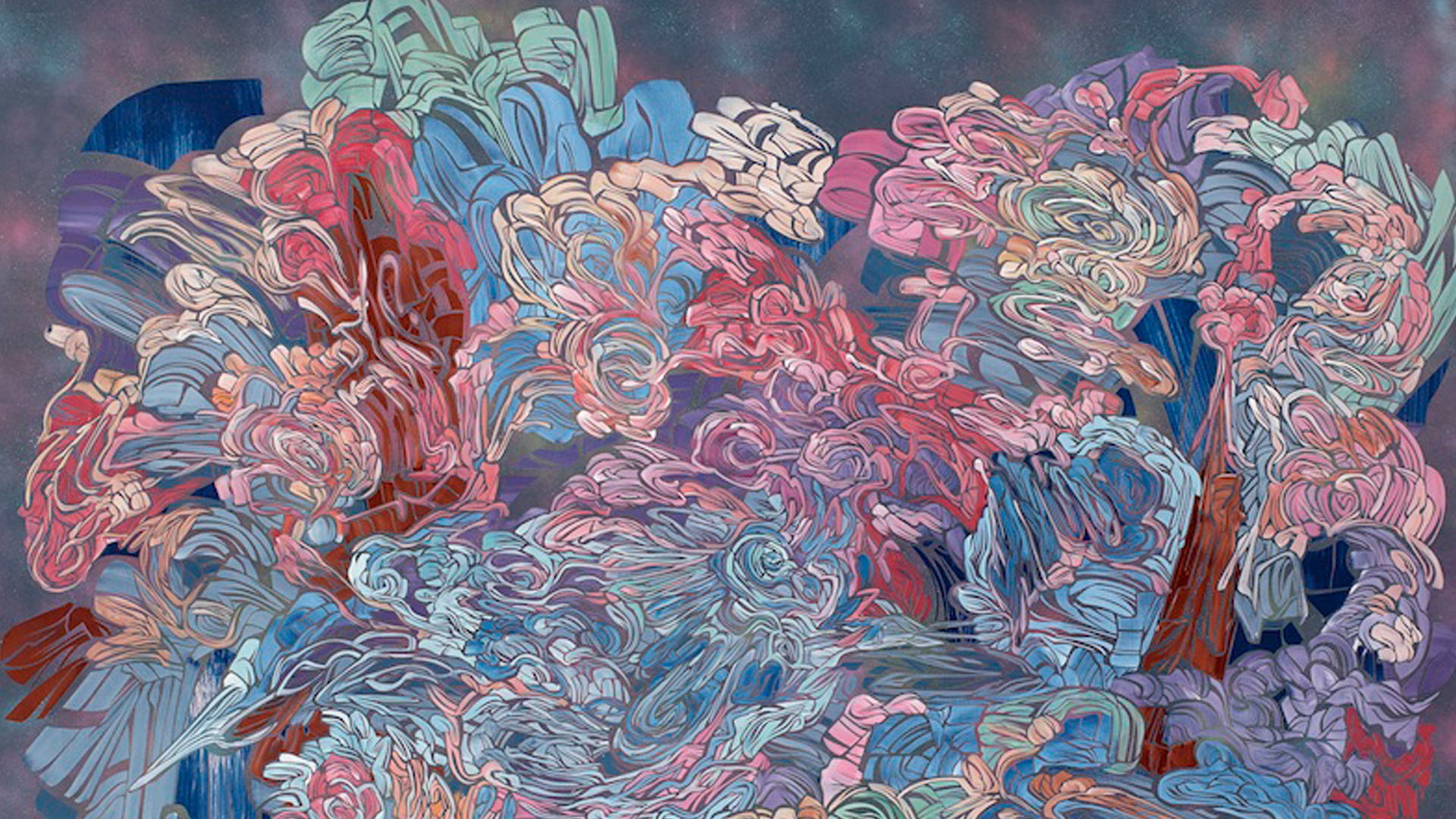 Earlier this month, Emilio Pérez opened a solo show at Galerie Lelong in New York’s Chelsea district. Rafael DiazCasas takes a close look at the works in Footprints on the Ceiling, and the inspirations behind Pérez’s art.

The best way to conceptualize the work of Emilio Pérez (New York 1972) might be as a furrow of impressions left by a knife on a painted wooden panel.

Having always been attracted to both painting and drawing, Pérez’s creative practice is a back-and forth-conversation between the two. Rather than sketching or otherwise planning them out, he arrives at his compositions through an intuitive additive/subtractive process. His hyperkinetic and anxious personality does not allow him to sketch or make plans prior to approaching his prepared panels, a custom that brings a distinctive freshness to his painting.

After applying multiple layers of enamel paint, then covering them with additional colorful layers of acrylic paint, Pérez lets his cutting knife do the work, peeling away large and small areas that define the final composition. He breaks into endless possible avenues, carving an abstract universe that invites the viewer to explore multiple combinations of the unknown cosmos.

The resulting low-relief surfaces convey a striking sense of three-dimensionality and negative space. They invite, almost demand, close examination, and the impulse to touch them is almost irresistible.

Footprints on the Ceiling is Pérez’s third solo show at Galerie Lelong New York, where it runs through February 1. He likes to title his shows after suggestive phrases that are amusing and also allude to his intentions concerning the work. Informed by music and taking the lurid covers of sci-fi and pulp fiction novels as its starting point, Footprints on the Ceiling is named after a 1939 locked-room mystery novel by Clayton Rawson.

Water and its movement are themes that emerge in these works, reflecting Pérez’s own island-rooted heritage as the son of Cuban exile family. His painting The Endless Island (2013) may be understood as an indirect reference to the past, present, and future of natural life and energy around a mass of water. The complex energy vortex that fluxes in and out of the artwork paraphrases an organic flowing of life, depicted using several multicolor twisted brushstroke-like paths.

A similar vortex is exposed with maximum force in the oversized triptych All I Can Say(2011). Apparently modeled after the energy and movement of the quiet moment before a flood wave, the work structures the peak’s formation from the inside out, from the vantage of one riding it while surfing, a sport that Pérez practices. The majestic force of these waters resembles the expansive energy generated by a hurricane in the Caribbean, as Pérez carves the two-dimensional surface to interpret the polyhedral vitality of the sea.

Growing up and studying between New York and Miami, Pérez gained a strong sense of Cuban culture from his family. That background leads him to say that “The island history has defined who I am today and shaped my journey into life and art.”

Pérez’s inspiration also comes from his admiration of classical period paintings with particularly dynamic compositions. He usually views these works as abstract wholes, ignoring any figurative representation. Perhaps the one painting in the show that has a figurative reference is The Last of the Secret Agents (2013), a humorous 21st-century version of the vanitas, with death as the beginning and end of the cycle of existence. The artwork was constructed with the color red as its base; swirling elements of the composition come together to create what could be a face like a giant fingerprint, in a reflection of the stereotype of a fool’s head. The title is a reference to a comic 1966 song by Nancy Sinatra, celebrating a would-be detective: “he’s never caught one spy, I’m told/he’s never even caught a cold.”

A horizontal column depicting the advance of a tumultuous and impetuous energetic mass flood, the show’s curving 9 x 40-foot mural (Untitled, 2013), is its tour de force. The piece, strategically located at the entrance and thereby modifying the original room layout, beautifully conveys the unity of space and form, transforming and personalizing the gallery. It possesses an epic cinematic effect that welcomes visitors and invites them to walk into Emilio Pérez’s personal creative realm. It displays his vision and ability to engage in and develop large scale projects, a clear reflection of the confidence and maturity of his practice and work.

Overall the artworks in Footprints on the Ceiling are driven by a concentrated and cohesive energy; the compositions are structured toward a center, defining it as focal point. This is a contrast to the general style of Pérez’s earlier work, in which the painting surfaces were entirely carved, resulting in a more expansive diffusion of energy and visual force. These recent works evince a more atmospheric quality, indicating Emilio Pérez’s development as an artist whose manipulation of space, bounded yet flowing, continues to expose hidden layers of meaning in unexpected ways.

Footprints on the Ceiling runs through this Saturday, February 1, at Galerie Lelong New York.