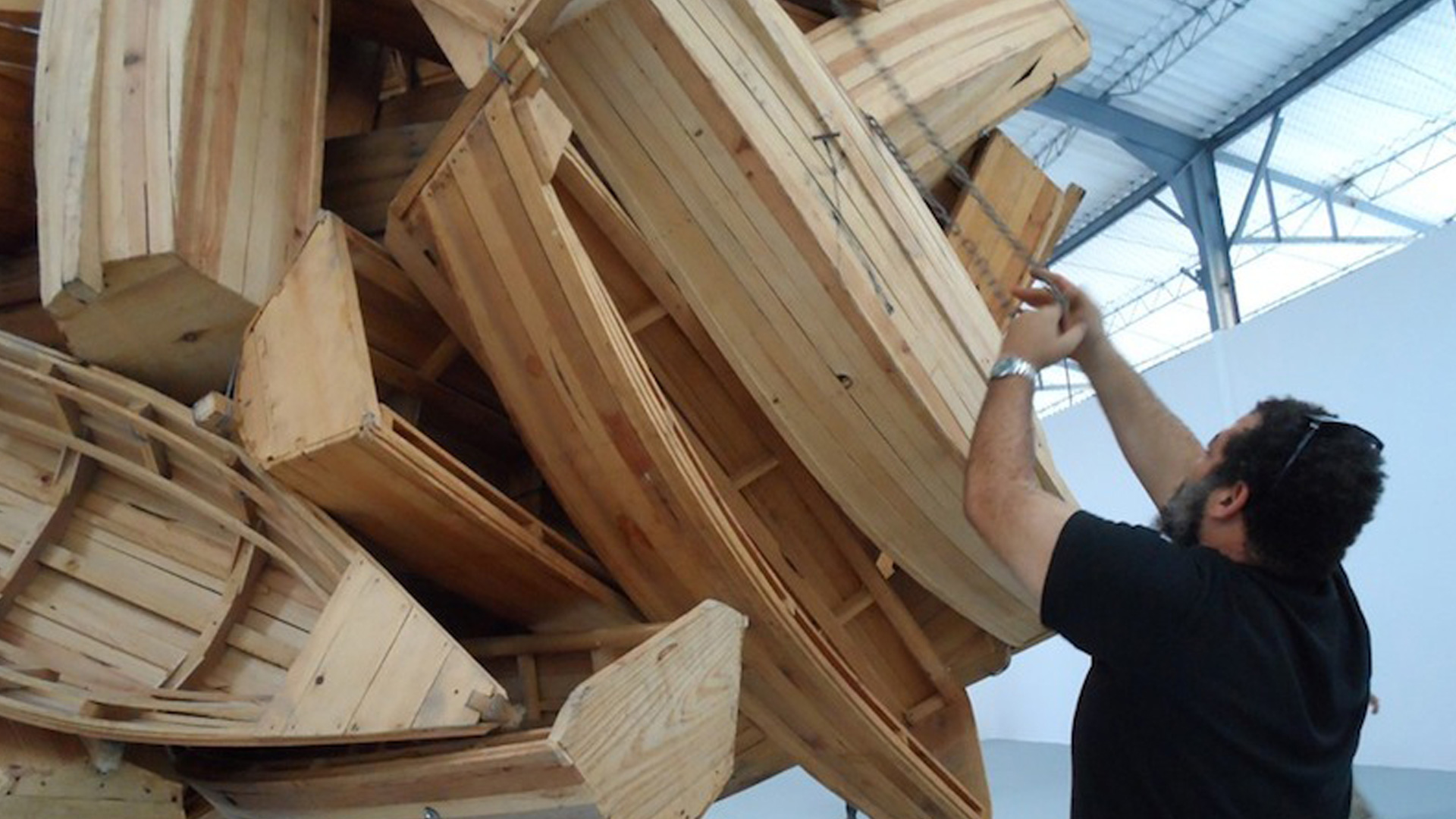 The painter and sculptor Alexis Leiva Machado (Kcho) just opened his studio in Havana. Evidently he didn´t have in mind the oasis of solitude that many people envision for executing their creative ideas. His Kcho Estudio Romerillo. Laboratorio para el Arte is a collective space where children, young people, and adults wander in and out. The space officially opened on January 8, 2014, 55 years after Fidel´s entry into Havana, and the opening was attended by the Cuban Revolution leader himself.

More than a private studio, Leiva Machado has created a nonprofit cultural space that has—in addition to work space for the artist—a library, theater, two galleries, and a experimental graphic workshop, as well as open-access spaces for the community (Romerillo, Playa, Havana) and anyone else who’s interested. Ailín García Brunet, who is responsible for public relations, projects, and archives at Kcho Studio, explained to Cuban Art News that the area occupied by the new buildings had once been used as a workshop for repairing school buses, but that the structure had been abandoned for 20 years and had been practically in ruins.

The painter and sculptor, born in Isla de la Juventud in 1970, often conceived his works at home. To create them, the artist first made drawings and then constructed the works to scale. “He used to prepare models, and then when he arrived to the exhibition place, he saw his works already finished for the first time,” said García Brunet. “It was a difficult process. He needed a large space in which to create.”

For Kcho, the relationship with the Romerillo district was not casual. That “hole located in the Havana center” was familiar to him, “as it is just in front of the ENA (National Art School),” the artist himself explained. “When I left home, I was a teenager; I was a scholarship student coming to a new place. Romerillo was close to my neighborhood. I had many friends and girlfriends there, had some quarrels, scrounged meals to keep going.” Kcho’s art has expressed nostalgia and an interest in his own history as an individual and a social being. In sculptures like Herencia (Inheritance, 1989), he used blue bedsheets made for him by his mother to create a Cuban flag, which he finished with wood, branches, wire, rope, and soil.

When he returned to Romerillo to build his studio in July 2012, Leiva Machado saw the deterioration of streets and public spaces. So before starting construction he developed a Social Encouragement Project, through which he turned garbage dumps and abandoned spaces into six parks for the community inhabitants. Kcho´s work as a cultural promoter could be as inclusive as his work La Regata(1993-1994), and as extensive as his 16 meter-installation David (2009). His intention is to develop social, educational, and cultural projects. “These are actions destined to transform,” he said. “Art is the best medicine to solve problems.” Kcho’s goals for the studio include artistic experimentation, the diffusion of art for all, and promoting the values of Cuban heritage. This reflects a certain boomerang effect: despite travelling the world, the artist always returns to his homeland.

From the local to the global

Kcho Estudio Romarillo has several spaces: the Juan Almeida Bosque Library, the Tocororo Theater, La Nave, which is a space for contemporary art, and the Marta Machado Art Gallery, named after Kcho´s mother, who had been an important popular artist and cultural promoter in her birthplace, Isla de Pinos.

According to Ailín García Brunet, the complex will also have welding, foundry, carpentry and pottery workshops. There is also an area for the operators who are helping to build the center. “Kcho has a space to develop his work, and next to it is a classroom for workshops in drawing, puppet-making, etc. Available courses will be announced in a poster at the main entrance.”

García Brunet continues: “The Juan Almeida Bosque Library is open seven days a week, 9 in the morning to 9 at night. We received many of the books as donations, and others are part of the collection that Kcho has preserved for years. They cover different topics, but visual arts themes are the most common. There’s also an Internet surfing room and a projection area. We have the two hundred best films in the history of cinema, donated by ICAIC. There are also video courses and works of video art video. The Tocororo Theater will host concerts and plays.

La Nave, the space for contemporary art, is open to young people and those having the latest art concepts worldwide. First in the space is El pensador (The Thinker), a show of Kcho’s most recent work. The title work is an enormous piece created from polyfoam boats, which is being shown along with 11 other works.

Along the same lines, the Martha Machado Art Gallery will present works by internationally recognized masters. We want to show work by Andy Warhol, Spencer Tunick, and other artists in the Kcho Studio collection. The exhibitions take a didactic approach; we use the walls to convey notes about the artists’ lives and works, so the public has that information even if they don’t have access to the catalogue.”

The show Lam, eres imprescindible (Lam, You Are Indispensable) opened this gallery. It includes two folios of engravings by Wifredo Lam (Cuba, 1902-Paris, 1982): El último viaje del Buque Fantasma (The Last Voyage of the Ghost Ship, 12 lithographs, 1976), inspired by Nobel Prize winner Gabriel Garcia Marquez´s story of the same title; and Para el Álbum La Feu Vert (Album of the Green Light, 6 lithographs, 1974). Three additional works by the Sagua La Grande-born artist are on view, including a large ceramic plate, 90 cm (35 inches) in diameter, created by Lam in 1977 in Albisola Mare, Italy, and captured by the camera of Cuban director Humberto Solás. Solás´s documentary is also part of the exhibition.

“This ceramic plate,” says García Brunet, “is the jewel of the show. This is the first time it’s being shown publicly anywhere in the world. Kcho persuaded Claudio Ferrioli, the collector who owns the piece, to exhibit it in Cuba. If it’s possible, and with the necessary protection, we’d like to present it in different provinces around the country.”

In both galleries, Alexis Leiva Machado is the temporary curator. New exhibitions will be presented every four months. In addition to galleries, the center has a sculpture garden in which artists can place their works.

Kcho Studio was established as an independent project. García Brunet explains that all resources spent on the project come from Kcho’s work. Access to the center and its services are free. The space opens a new opportunity to nonprofit personal projects in Cuba, where new proposals have emerged with a marked interest in changing the model of public participation in and dialogue with art. Other spaces with similar goals are already in existence, such as the Laboratorio Artístico San Agustín (LASA), which participated in the 2012 Havana Biennial, and the Cuban Art Factory (FAC), sponsored by the musician X Alfonso.

Kcho´s initiative “has some meaning in Romerillo town,” says García Brunet, “since it is a neighborhood located in the center of the city but also a marginal community. Even though it’s near the Instituto Superior de Artes (ISA), local people don´t go into that institution. They’re people with low incomes who don´t pay to go to the Museo Nacional de Bellas Artes (MNBA). After a physical transformation in Romerillo, thanks to the new parks realized through the Social Encouragement Project, Kcho Studio has emerged to offer a spiritual transformation.”

The Experimental Graphic Workshop is part of the Laboratorio para el Arte—the eighth such workshop founded by Kcho around the country—and has a lithographic press. “The idea,” says García Brunet, “is that printmakers share their knowledge with community children and young people, and if possible, ISA students would work here and give lessons during their training period.”

On this point, Kcho noted that he considers printmaking workshops to be a way of promoting cooperative impulses. “A print is an artwork in multiple,” he explains. “You can keep one for yourself, take one to your kids´ classroom, or leave it in a hospital room. It’s a great help in educating and cultivating people. And it´s good to teach an artist, right from the beginning, to share his work.”