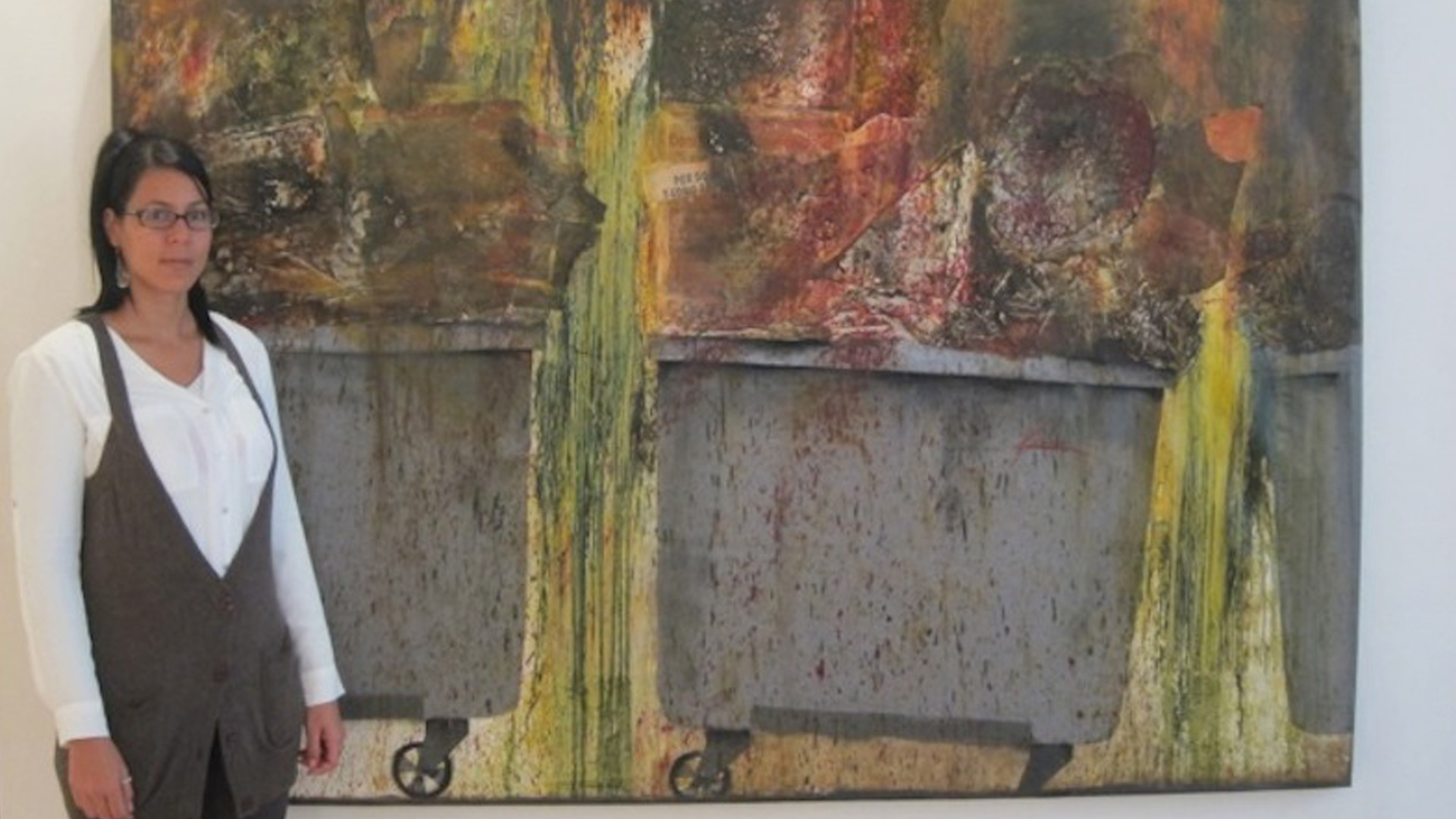 This fall, the Center for Cuban Studies Cuban Art Space exhibited the work of six young Cuban artists who are part of a collective called La Pared (The Wall). The show Up Against the Wall! ran from September through early November. Four of the artists, all graduates of the prestigious San Alejandro Art Academy, came to New York for the exhibition. Center curators Sandra Levinson and Juan Tamargo talked with them about their work, the island art scene, and how they think their art differs from that of their contemporaries. The four are Yuniel Delgado, Esteban Jiménez, Jonathan Joubert and Karina Ortiz. (The other two artists in the exhibition are Yordanis García and Dailon Ledesma.)

How did you get together as a collective, and why?

Yuniel: Most artists go their separate ways when they graduate, but when we left San Alejandro we were inspired by artists who worked  together in the 1980s and 1990s, such as Arte Calle—and even earlier, the group Los Once of the 1950s. Many of the professors we had at San Alejandro had once been students there, and they too inspired us to work together, especially Jorge Luis Rodriguez, the vice-director of San Alejandro. We shared certain ideas about art and society, and in our second year we started working together to protect the way we worked.

What do you mean by that?

Jonathan: Many Cuban artists were doing conceptual art as a way of expressing what they wanted to say about society, about themselves, and about art. In contrast, we had the idea to conserve painting as our art form. We liked painting. We wanted to protect our kind of art. We felt that much of the art being done in Cuba was done to satisfy the market, and many graduates of ISA [the Instituto Superior de Arte] left there with these conceptual ideas about art and brought them to San Alejandro where they came to teach.

Yuniel: For us, painting is more natural, more organic. We like working with oil and acrylic. It feels more alive to us.

Karina: You feel more connected to what you’re doing.

Jonathan: It’s a way to express oneself more directly, to use everything that we could get our hands on.

Yuniel:  Painting to us is more spontaneous. It seems part of us. But sometimes paint was hard to find, so we used whatever found materials we could, but always added to the painting. You can see that in a number of works in the show.

How do you work together?

Yuniel: We share our ideas. We criticize one another’s work—a lot of criticism and self-criticism goes on. But we’re never thinking about whether this will sell. Many people do create to sell but so far we don’t. What’s important is the work we do together.

Karina: Even though we paint very differently.

Yuniel: We’ve been together six or seven years, at the same school, studying the same artists, reading the same books, facing the same problems. We’ve created an artistic family that allows for criticism and self-criticism.

Estéban: I like criticism that is sharp, and I usually ask for it from the others before I finish a work. That’s what helps me the most.

Karina: Whenever we finish a work we stand in front of it and say what we think of it. Learning to articulate our ideas artistically is one of the best aspects of working collectively. We also share whatever money that comes in from the sale of our art.

You’ve said that your emphasis on painting differentiates you from most other young artists. What other differences are there? And who are the artists who most inspire you?

Karina: I like Fremez very much. Like him, I deal with current social issues such as homosexuality and political problems. My “Garbage” series is influenced by society, the cultural “decadence” I want to show, along with the physical collapse of much of Havana’s architecture.

Yuniel: I’d like to see a resurgence of expressionist style and continue with the kind of art that Antonia Eiríz did, for example, and Goya. I’d like to be more confrontational, pushing this expressionist style to make it stronger, more shocking. I want to be more up front, stronger. I want people to be confronted with my art and my ideas. I want my work to open eyes!

Estéban: I can’t say I have any direct influences because my painting is about how I feel in my life at the time, sometimes dealing with social and political stereotypes—about women, for instance, I want to break down the stereotypes of female identity. I like to mix things up with double meanings. I too want to provoke. My favorite work in the show is Los gordos de mi vida—using obese women as a way of talking about this, a bit of the grotesque, like Fabelo and Nelson [Domínguez] are doing.

Jonathan: My inspiration is the disquiet I feel about my society, and the search for meaning in our own lives. Maybe my work is more emotional than the others’. For me it’s an emotional impulse that chooses the theme. Then my intellect takes over when I try to figure out the best way to shake up viewers. My favorite work in this show is La Cena, which draws on Cuban and European influences—the Cubans Wifredo Lam and Ibrahim Miranda, the Belgian James Ensor. I mixed elements, even actors, along with artists of an earlier time. This “dinner” painting is a dinner without food, a very Cuban meal. I like duality.

Ibrahim Miranda and Duvier del Dago are artists I admire. Though they are very different, I like the way they conceptualize. And in terms of painting as painting, Pedro Pablo Oliva and Rocío García.

You told us that your work, even these works, would not be shown in Cuba. Why is that? Do you know that for a fact, or is this simply your assumption? And if so, why?

Karina: Most galleries in Havana are afraid to show expressionist painting that is too strong, or work that is confrontational, with social and political themes. Even during the Biennials, there are the same Cuban artists being shown, the same kinds of installations. There is nothing new, really.

Jonathan: There are many, many good artists that no one knows. And of course there is a lot of competition. One problem is that nobody shares information about where it’s possible to exhibit. Without access to a full Internet it’s difficult to reach a market.

What brought you to the Cuban Art Space of the Center for Cuban Studies? Did you know about us before you came to New York City with your art?

All of the artists: We didn’t know about the Center before coming here. We came at the invitation of a gallery in Chelsea, but when we got here we found that the owner had become ill and the gallery was not working. We were stuck here without money or a place to live and with all of our art. We had an apartment to share for one month, so we started walking around New York, visiting galleries and showing our work, and someone told us about the Center. That’s how we got here—just luck.