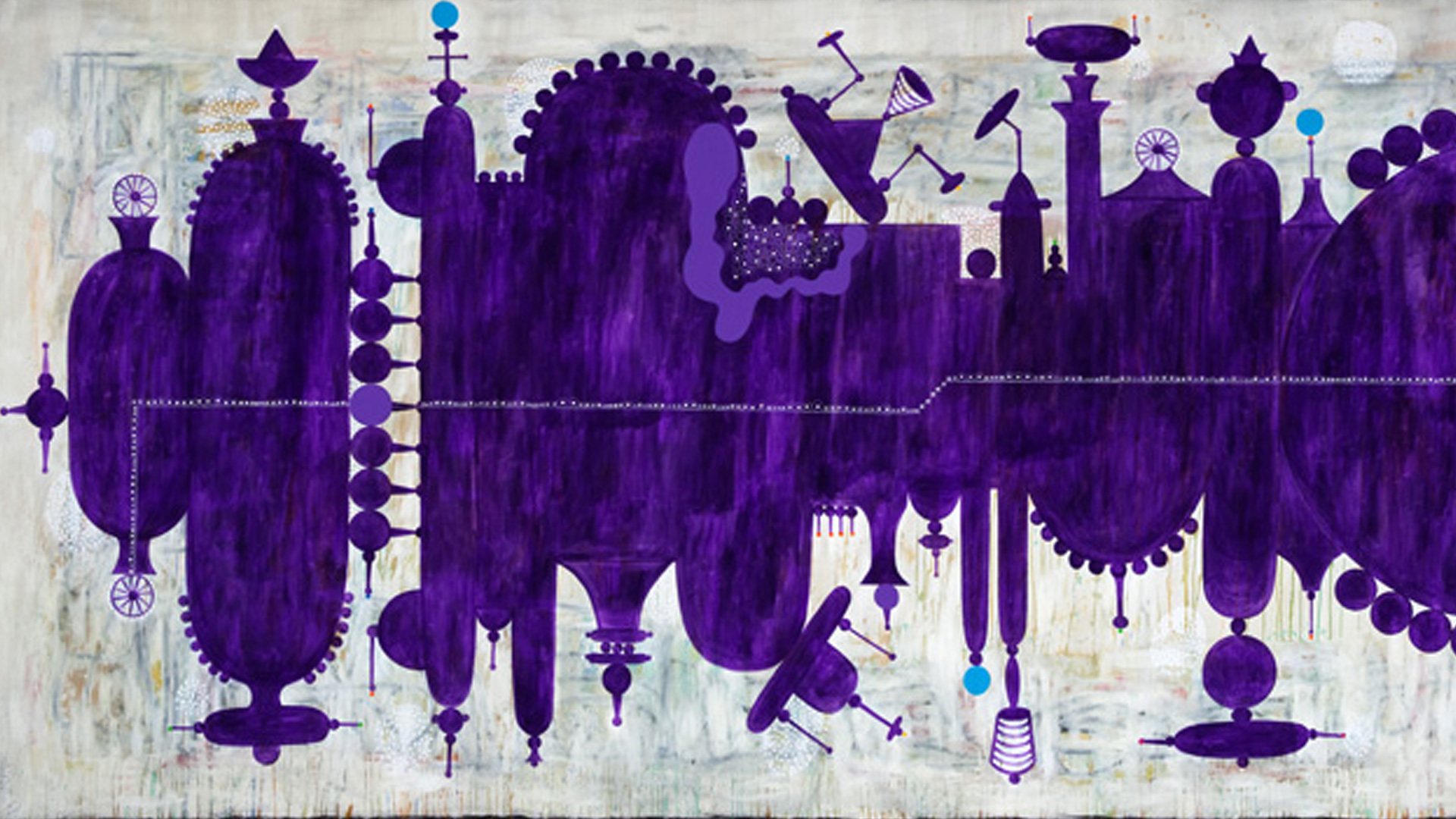 This fall saw the opening of not one but two solo shows by Luis Cruz Azaceta: Falling Sky, on view through December 15 at Lyle O. Reitzel Gallery in Santo Domingo, and Louisiana Mon Amour, on view through February 8 at the Acadiana Center for the Arts in Lafayette, Louisiana. Concern for climate change, environmental disasters, and other upheavals (natural, social, and political) is a common thread running through both shows.

Falling Sky presents a series of recent works under that title. Louisiana Mon Amour presents works from a thematically related series, Shifting States, as well as an earlier series, Museum Plans. The show’s title work is an installation of more than 20 objects, constructed and reassembled using duct tape—a metaphor for life after Hurricane Katrina, the BP oil spill, and other environmental catastrophes.

In her catalogue essay for the show at Lyle O. Reitzel Gallery, Janet Batet offers insights into Azaceta’s recent work and the themes he has explored throughout his career. Here, we present a substantial excerpt from her essay, “Falling Sky: Ecocide as contemporary landscape.”

From the start, the work of Luis Cruz Azaceta (b. Havana, 1942) has centered on an inquiry into the contemporary human condition. We are presented with an off-centered individual, both a victim and a reflection of circumstances that overcome him and limit his personal fulfillment. Confronted with migratory dispersion, urban violence, pandemonium, or natural catastrophes, the subject in Azaceta’s work—deprived of all support—is overpowered by the omnipresent feeling of oppression, fear, and uncertainty that threatens our existence. If this feeling first manifested in recurring images of dismembered bodies, decapitations, and acts of cannibalism, formally identified with gestural expressionism, at this point in Azaceta’s work the individual has ceased to exist, his traces palpable only through the catastrophe that annihilated him.

Such is the sense of apprehension underlying the landscapes of chilling beauty that form the series Falling Sky. These works are marked by an abstract sensibility in which the delicate traces of the drawing and the weighty handling of the color offer a contrast to the sense of disaster that animates them.

With exception of The Artist (2011) and Fence (2012), in which you can still catch a glimpse of the human element, the rest of the works are abstract landscapes, where organic and geometric forms coexist in tense and articulate equilibrium.  On occasion, and as a border that frames and constricts, the machinery pokes out as a sort of threatening social allegory: an expression of the desire for control of the natural medium, a catalyst for the chaos being portrayed.

Charged with the faceted spirit of cubist decomposition, the works seem, on a symbolic level, to emerge as metaphors for the loss of confidence in progress that typifies our era—a definitive expression of the failure of modernism. Planes of color, vibrant as gems, are driven by waves of black clouds, oil stains that grow gigantically, and threatening objects that cross the sky, which emerge as the new contemporary landscape.

Falling Sky shares vital points of contact with another recent series by the artist. I am referring to Shifting States. Here, Azaceta concentrates on cutting-edge technology to express the omnipresent sense of repression and vigilance that characterizes contemporary society: cellular phones, drones, radars, and microwave towers that, in alarming synergy, integrate themselves with architectural typologies such as mesquites and minarets. In this series, the allegory of power is situated in the economic, religious, and military conflicts that afflict our era like an epidemic. In Falling Sky we are presented with an allegory of even greater reach, whose temporal axis reviews the historical foundations of our society—extending, for this purpose, to the establishment of modernity, the culminating moment for the optimistic notion of progress with which Western culture sustains itself.

Progress, understood as the accumulation of knowledge, virtues, riches, and productive forces, implies the capacity of human beings to modify their surroundings in search of a better society, bringing them closer to a state of perfection and harmony. At the present moment, the irruption of technical draftsmanship associated with the graphic, architectural, and industrial arts is in full bloom. It is no coincidence that, in their typologies, Azaceta’s machineries allude to this technical branch of art history. However, the notion of progress in these paintings appears fractured, calling into question the zeitgeist of our times. The machinery becomes a strangling blockade, suffocating the natural space.

The recurring themes in these 21st-century landscapes have changed drastically. We are faced with hurricanes, tornadoes, tsunamis, floods, storms, oil spills, excavations, acid rains. The fragmented character of the composition alludes to the loss of harmony and threat of chaos that loom as an imminent reality. On occasion (Tsunami III and Tsunami V) the human element seems to emerge from the point of color that—as a sort of cellular entity, the minimal unit capable of stimulating change—falls victim to the overwhelming force of nature that rebels against the stubborn domination of the human being.

The broken landscape, characterized by areas of color and monochrome (Oil Land, Tierre Buena, Tornadoes V) responds to the breakdown of the natural and social orders of our society. As a contrast to a utopic notion that guides us toward modernity, Azaceta’s work places itself in dystopia. As an expression of that repellent daily reality, these landscapes hang like swords of Damocles that, far from portraying fictionalized states, reveal the imminently disintegrating character of our contemporary environment.

The series of canvasses that lend their title to Falling Sky invariably offer vast black skies on the horizon, just above the bottom edge of the painting. Above the skies are scattered elements that allude to our assumed technological development: architectural blueprints, wheels, tubes, and springs. They attest to the decline of a bankrupt society, a compendium of the collapse of industrial civilization.

In its threatening beauty, Falling Sky is a state of alert that points to the urgent need for a collective change that could, in time, avoid the imminent collapse of a society based on insatiable global capitalism. Reflective of a material downturn, and the ecological syncope and social and political uncertainty that accost us, behind these apocalyptic landscapes we seem to hear, as a litany and a pressing warning, that old Chinese proverb: “To get out of the well, the first thing to do is stop digging.”