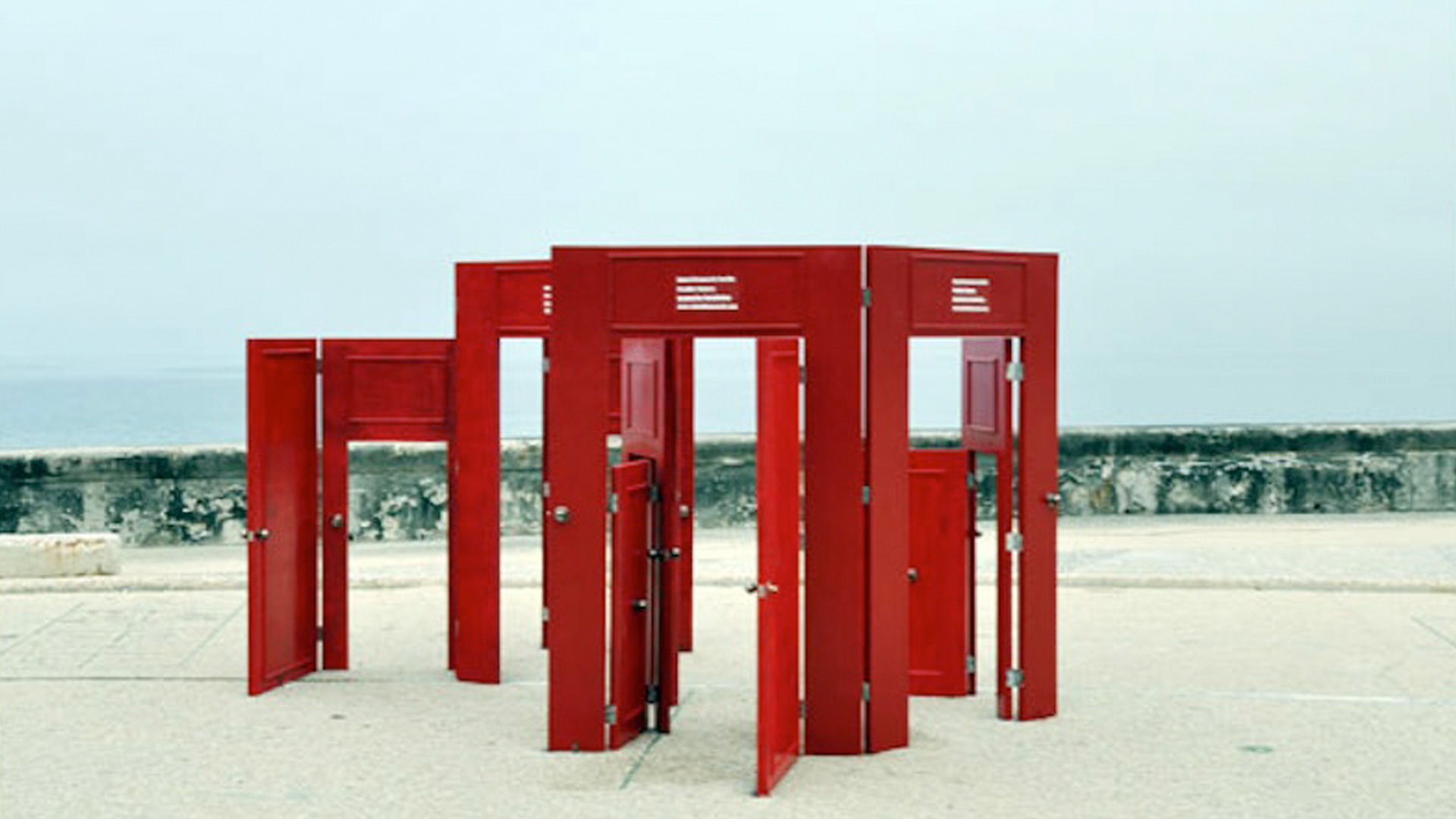 More than a year after it debuted at the 11th Havana Biennial, an exhibition of Detrás del Muro opened at The 8th Floor, under the auspices of the Cuban Artists Fund, the Rockefeller Brothers Fund, the Copperbridge Foundation, and the Shelley and Donald Rubin Foundation. Juan Delgado, the project’s untiring curator-producer, paused for a chat with Rafael DiazCasas.

Juan, tell us about yourself and how the idea for Detrás del Muro came about. What has the journey been like?

Detrás del Muro is my latest curatorial project, and the most ambitious in my career so far. It has its roots in 11th Havana Biennial. The process meant following a seemingly endless series of mazes of all types—artistic, legal, bureaucratic, economic, etc. But it’s a long story. This is a very personal project that brings together my daily life and my interest in contemporary art in Cuba. I have lived on the Malecón for years, and I take great pleasure in that. The project has been like a dream come true, since the seawall always inspired me. Many were the times that, standing on my balcony, I would think about how to develop a project that could dress the Malecón in art and then invite everyone to enjoy it.

But this did not happen in the overnight. I’ve worked for a long time in the art arena. I worked in the Fondo de Bienes Culturales (Cuban Foundation for Cultural Assets) for several years, and then represented the Cuban painter Manuel Mendive. A few years ago I created the Cuban Arts Project with the idea of promoting the work of new generations of Cuban artists regardless of where they live. This project has helped me show their work in Cuba and internationally at art fairs and exhibitions, such as Confluencias Inside, Pieza Únicaand now Detrás del Muro.

What was the process for selecting the artists and assembling the project? What were the main funding sources for such an enterprise?

Over several years now, I’ve been closely watching the creative development of several artists who became part of this project. We’ve developed a natural complicity, which in some cases has resulted in close collaborations. I approached them asking for specific proposals for the project, and from those I received I chose the ones I considered most appropriate, based on a simple goal: to play with, engage with, and have a dialogue with the seawall, the city, and its people—namely, everyone who uses the Malecón, whether locals or visitors.

Some of these proposals were realized without modification. Others were changed to adapt to the conditions of the wall itself and the possible options for specific productions. Other proposals were modified in response to the requirements of the city and the government. And some could not be done. In many cases it was an evolutionary process, adding input from the various levels of project review and enriching the outcome. The project was entirely financed by the artists, the Royal Norwegian Embassy and myself, and this is something I say with special pride.

There are so many stories from those days. I would like to mention, for example, the installation piece Happily Ever After by Rachel Valdés-Camejo. Due to traffic requirements, it was moved from the location it had originally been conceived for. When the enormous mirror was reinstalled on the sidewalk running along the wall, we discovered that it had been set directly in front of an allegorical image of the Vírgen de la Caridad (Virgin of Charity, patron saint of Cuba), which a believer had attached to the reefs in the harbor years ago. Almost immediately, more than one devotee approached us to express satisfaction that the installation had been placed there, and for many viewers the work took on an important additional meaning. This was an unexpected and wonderful development and had a great impact on Rachel and all of us on the project team.

Another is the case of Las Garras en la Piedra (Claws on the Rocks) by Roberto Fabelo. It was discovered by the kids who swim along the Malecón. They turned it into a diving board, to the point that it sank from overuse and presumably remains stranded on the reefs below. It’s a strange way to leave a mark—decaying and hidden from view. I’m curious to see if, as the years go by, someone will be interested in searching for such a treasure. If that ever happens, I’d love to be there.

Possible Chances by Rafael Domenech is another story, one that has left a much more visible mark on the city. These days the sculpture ornaments the Callejón de Los Peluqueros (Hairdressers’ Alley) in La Habana Vieja. The Office of the Historian of Havana was interested in the piece and asked the artist to donate it to the city. He agreed. It gives me a peculiar pleasure every time I go by and see people interacting with the sculpture. That’s one more wall broken down, considering that Domenech has been living in Florida for several years.

You produced a documentary on Detrás del Muro by filmmakers Sebastián Milo and Rolando Almirante, which has been shown internationally.

And now there’s a book, with essays by architect and urban designer Mario Coyula and by your longtime collaborator in visual art projects, art historian Elvia Rosa Castro. What does it mean for you to bring this project to New York? What’s next?

Through the Cuban Artists Fund and the interest of The 8th Floor, we’ve brought the project to New York City with the goal of promoting these young artists’ work, and to encourage dialogue and communication between the works and the public.

For some of the artists, this is the first time they’re presenting their works in New York and in the United States. I have great interest in showing these works internationally. These artists are part of a new generation that is creating strong work, under conditions that are unprecedented in the past few decades of our country’s history. For me it’s a pleasure to serve as an impartial facilitator for these youngsters, and to help them find their footing in the international art scene. I’m interested in keeping the dialogue going between generations, building on the history of art in Cuba, exploring creative confluences, and provoking encounters.

In  the immediate future I plan to continue investigating the wall and using it as an exhibition space in the next biennials, to break it open for all. I’m looking to develop pathways for understanding and explaining who we are, and for envisioning where we’re going. After all, Detrás del Muro—Behind the Wall—the truth is hidden.