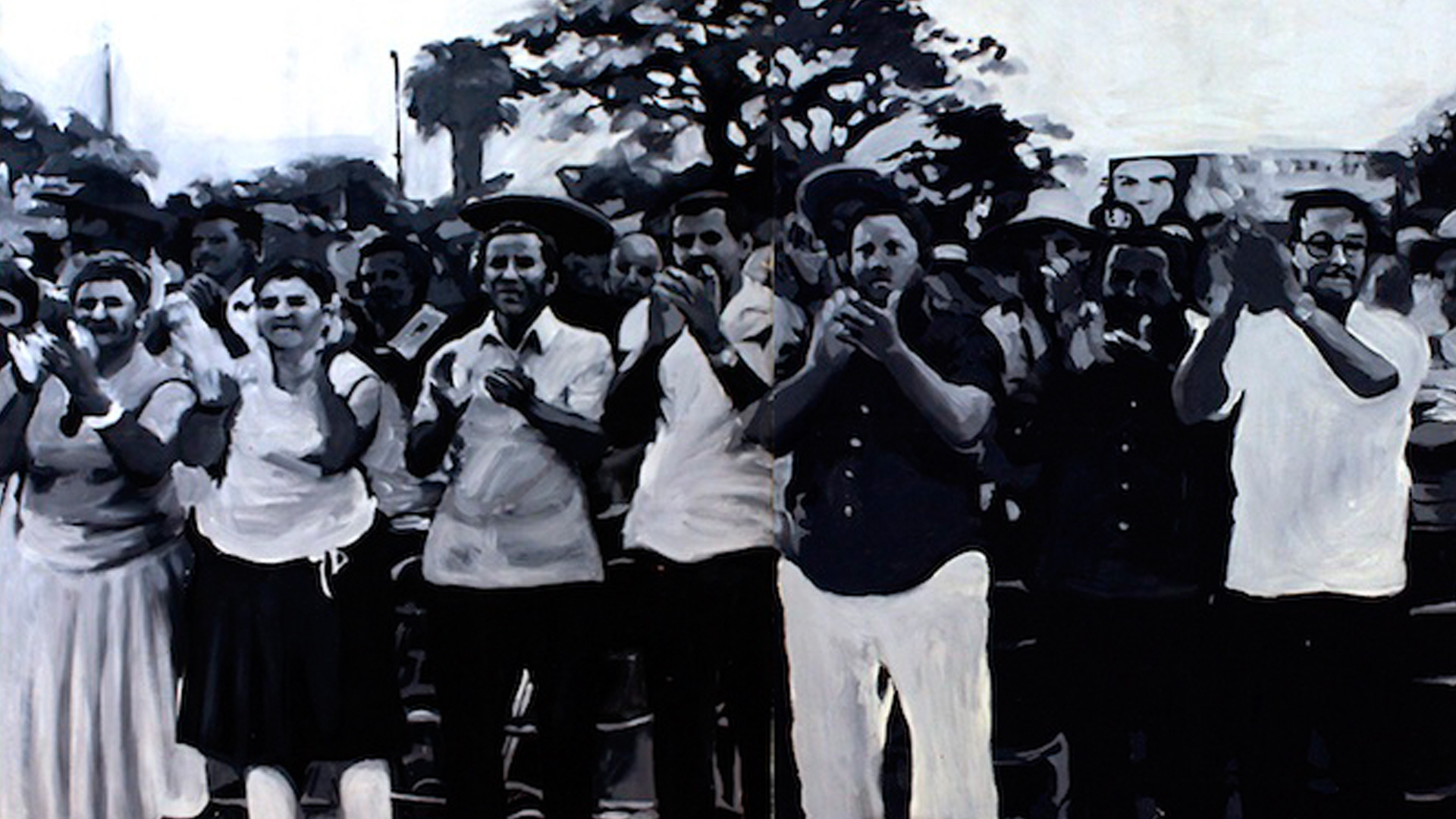 Last month, the Havana art duo opened Vanitas, their first solo gallery show in Florida, at Pan American Art Projects in Miami. Curator Irina Leyva caught up with them for Cuban Art News. (For photos of the opening, see the photo album on the Cuban Art News Facebook page.)

How long have you been working together? What’s the working process like between you? And how do you balance family life and art production?

Without a doubt, one influences the other and vice versa. We met in 1992 while organizing an exhibition. It could not be produced, but it was our first collaborative work, together with other artists. Since then, we’ve worked more and more often as a team—as a laboratory of ideas that we develop. We complement each other professionally and also collaborate with other artists, photographers, researchers….

Your work has a strong historical and political component, usually based on a Cuban context. I say “usually,” because there are a couple of pieces that are not related to Cuba.

The historical and political component in our work is evident, but it’s just a starting point for other big questions beyond the local Cuban context. You can read Don Quixote to learn about the Spain of Cervantes, but you can also go beyond the anecdotal to access the universal. Everything is somehow related to everything else. We focus on events in which our local history is linked to the universal and vice versa. It´s not about uniquely Cuban situations.

What artists or art practices do you consider as having influenced you?

Many of our exhibitions have been tributes to the works of other artists, ranging from Albrecht Dürer to Hans Haacke. As for art practices, conceptual art has been the most influential for us. In any case, Lezama Lima has said that the works illuminate the influences, and we like to share this idea of ​​putting the cart before the horse.

From another angle: how to make an art that is critical for Cuban discourse but can be appreciated by foreign museums and collectors?

Certainly, those most concerned with collecting and preserving art produced on the island are foreign museums and collectors. Cuban institutions and people living in Cuba have limited resources and/or many other priorities. And that situation is the same for all artists, not just those who produce art like ours.

When we work, we have in mind an ideal viewer, who is capable of tracing the creative process in reverse and who shares our point of view and our questions, or raises others. Whether or not this particular viewer is Cuban is irrelevant.

This is the first exhibition in the United States to bring together works made over the 20 years of your collaboration. With this show, you address issues related to Cuban history in a context permeated by political differences. Do you expect some sort of reaction? Have you already planned for this in the work?

There are different ways to address issues. Our work is more thoughtful than emotional, so it does not cause peaks of exaltation, either for or against. Vanitas is no exception. The Latin title is intentional, because this is not an exhibition “on Cuba,” but on the general and philosophical problems of human beings, which also manifest in Cuba.

Would you define your work as deconstructive? I feel as if, in your work, you’re “deconstructing” historical facts from an almost archaeological perspective, and revealing situations that have been deliberately glossed over by official historiography. Does your work propose a new narrative, or the implosion of the one that’s currently legitimized?

The human psyche is accustomed to understanding reality by complementing a thing with its opposite. It’s easy to understand how good something is by comparing it to what’s bad. But reality is much more complex to classify, and so is our work. We do indeed deconstruct some histories, but we also recuperate others. Vanitas, for example, explores and identifies what is enduring in other narratives, along with other components of these narratives that are left by the wayside.

Vanitas is your first solo show in Miami, where contemporary art has taken a significant role since Art Basel. How do Cuban artists see this territory from the island?

For centuries, the island was a place of transit, full of expectations of all those things waiting beyond the seas. Today there are similar expectations in Cuba, but we are not qualified to talk about any experiences but our own.

Vanitas is our first solo exhibition in Miami, which we curated ourselves with the collaboration of Alejandro Machado. The door was ajar for us because we were already included in some well-known collections in the United States and Florida. And in 2009, for example, our work was shown during the Art Pulse fair, although those works belonged to the 21C Museum collection in Kentucky.

We are very pleased at how this show has turned out, and we are really grateful to the staff of Pan American Art Projects, who have supported us throughout.

Toirac & Marrero: Vanitas is on view at Pan American Art Projects through November 23.