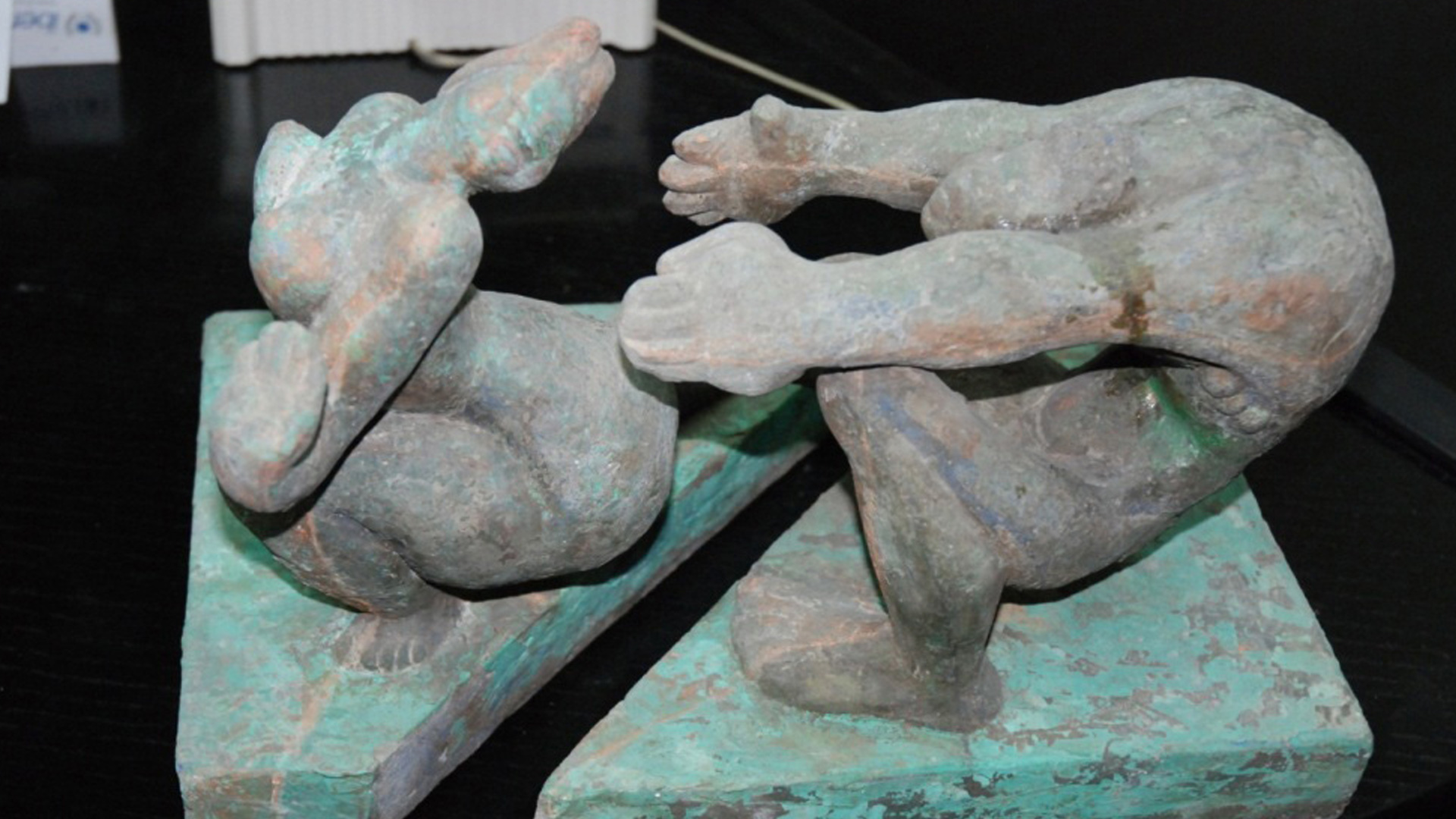 More than 300 Cuban sculptures are found in the Viñas-Gil Collection, a private collection based in La Roda (Albacete), Spain. Reflecting the poetic avant-garde from the 19th century to the 21st, it includes notable works by roughly 80 artists, such as Mario Carrieri, Teodoro Ramos Blanco, Francisco (Pancho) Antigua, Rita Longa, Agustín Cárdenas, and Kcho. It’s a collection that is arguably as valuable as the one held in the Museo Nacional de Bellas Artes in Havana.

When considering the word collection, many wonder as to the greatest benefit of acquiring works, be they ancient or new. For José Julián Viñas Picazo (La Roda, Albacete, 1954), owner of the Viñas-Gil collection, that reward “is never monetary; instead, it is the satisfaction of contemplating every day the works of artists that reflect their constant moods, their joys and annoyances, their successes and failures, their hopes to be fulfilled, and their projects realized.”

Viñas Picazo has no family background in art, but he studied architecture, and that surely gave him an eye for graceful proportion. When leisure permits, he himself creates sculptures, drawings, prints, and paintings.

How long have you been collecting?

I started in 1973 as a student in Andalusia, Seville. I purchased my first piece of sculpture, which was a naked woman, foreshortened. I bought it from an art student, and although it was signed, I know nothing about the artist. It´s a piece I still have in my bedroom, on the nightstand; the cost then was 500 pesetas.

When did you realize that Cuban sculptures could form a good collection?

Since my first trip to Havana, back in the 1980s, I realized that my interest was not the acquisition of paintings. Although I know that sculpture has always been the “cursed” medium of the arts. It’s hard to move sculpture, you need space for display, so there are fewer collectors, and its value doesn’t appreciate as much. But sculpture gives you a very important satisfaction that painting does not offer: you are able to enjoy the tactile quality of the works, their perfected forms.

What was the first Cuban sculpture to join the Viñas-Gil Collection? How did you get it?

I got the first works at art auctions. The first was a wood carving by Florencio Gelabert Pérez (1904-1995), acquired from the artist’s family.

Are you the only owner of the collection?

It belongs to my family, particularly my wife, Delia Gil, and my three children: Delia, José Julián, and Mario Viñas Gil. The name of the collection comes from my children´s last names.

How were you, a Spaniard, able to acquire works by so many significant figures of Cuban cultural heritage?

With much perseverance and the desire to go in search of those works I wanted to acquire. The collection also includes more than 300 prints by Cuban artists, as well as prints and paintings by artists from other countries.

What difficulties have you encountered in moving the pieces, especially when they travel from Cuba to Spain? I imagine you must apply for special permits.

Usually the works have been part of my baggage. As for permits, they must be requested from the Cultural Heritage Fund in Havana.

Did you find all of the Cuban sculptures in your collection exclusively in Cuba?

No, I’ve acquired them in different countries, sometimes in the most unexpected places. And in different forms: at auctions, or as purchases, gifts, or exchanges.

Which piece was the hardest to find?

Acquiring the works of Agustín Cárdenas was not easy. We were negotiating for some time, until the family decided to transfer them to our collection.

Is it complicated to select and then site the pieces?

Sculpture needs a place where it can somehow “breathe.” The main difficulty is to find a space in houses today.

Which works and artists in the collection are your favorites?

Oblata, by Teodoro Ramos Blanco and Mujer tocando instrumento musical (Woman playing musical instrument) by Agustín Cárdenas. The first is a Carrara marble head of a mulatto girl: her face reflects great spiritual serenity. The second is a female figure made of granite, which in my opinion could be the antecedent of Mujer con chicle, a famous sculpture by Cárdenas.

Several avant-garde artists are highlighted, but if I had to choose I’d select Ramos Blanco, as he was the first to show negrismo as an element of beauty in sculpture.

As a collector, you’ve met living Cuban artists and their families. What do you recall of those meetings?

I recall many pleasant moments and anecdotes. When I visited Pancho Antigua´s wife at her home, she showed me sculptures and drawings of fat women created by that artist and told me: “Pancho loved drawing fat women; nevertheless, he married me—a tremendously skinny woman.”

We’ve mentioned the Cuban art, but you have other noteworthy works in your collection.

There are works by Spanish artists such as José Luis Sánchez, Rafael Canogar, Juan Muñoz, Dalí, Garcia Muela; also the Romanian Constantin Brancusi and from the U.S., Alexander Calder.

Tell me a little bit about the ideas behind your exhibition La mujer cubana. Esculturas (The Cuban Woman—Sculptures), already presented in Spain.

The exhibition presents more than 70 pieces from the Viñas-Gil collection. It represents women in various stages of life, highlighting such themes as the female nude, heads, motherhood, sensuality, and Cuban themes such as negrismo, dance, and native figures. It also includes the famous fat women, made in the 1940s, under the influence of Hungarian sculptor Bernard Reader.

These pieces are mainly medium- and large-format, made in wood, metal, bronze, marble, and stone. They are almost all unique. In Cuba, bronze reproduction was difficult due to economic hardships and the lack of means, so sculptors had to produce the work directly, carving wood or stone.

La mujer cubana. Esculturas is the first and only exhibition of its kind on view in a European country and, of course, with this number and variety of avant-garde artists. Possibly it is the first time an exhibition like this is presented anywhere in the world. In the show, we try to analyze in depth what Cuban sculpture has represented as a whole.

When and where have you displayed the exhibition?

It has been shown in Córdoba, in the Museum of Modern Art in Huelva (2010), and in the exhibition galleries of the Cádiz Castle (2011). Also, it has been presented at the Albacete College of Technical Architects, at the opening of the José Saramago Cultural Center, and the Albacete Municipal Museum, as well as in cultural centers in Toledo and Guadalajara, Spain.

Is there a Viñas-Gil Foundation?

No, this is just a private collection. In Spain there is no major support for such foundations. However, we are open to considering any proposal for displaying our collection, from any agency or public or private entity from any country. The exhibition may be general or monographic, on a topic such as Cuban women, or the nude, or others that could be assembled: for instance, “Man—Ages and Forms,” or “Sculpture Drawings,” including sculptures and drawings by selected artists.

Have you traveled to Cuba often? What do you like about the island, in addition to the sculptures?

I have visited the country over several years and undoubtedly, the best of Cuba is its people—dealing with its people. I think the identification between Cubans and Spaniards is very strong; just look at the names of the families. Or ask about ancestors, and Cubans will talk about their Spanish grandmother who came from Galicia, Asturias, the Canary Islands….

One final thought: what is the most essential quality for a collector to have?

Enthusiasm and passion. Not to mention perseverance and dedication to the beauty of art.