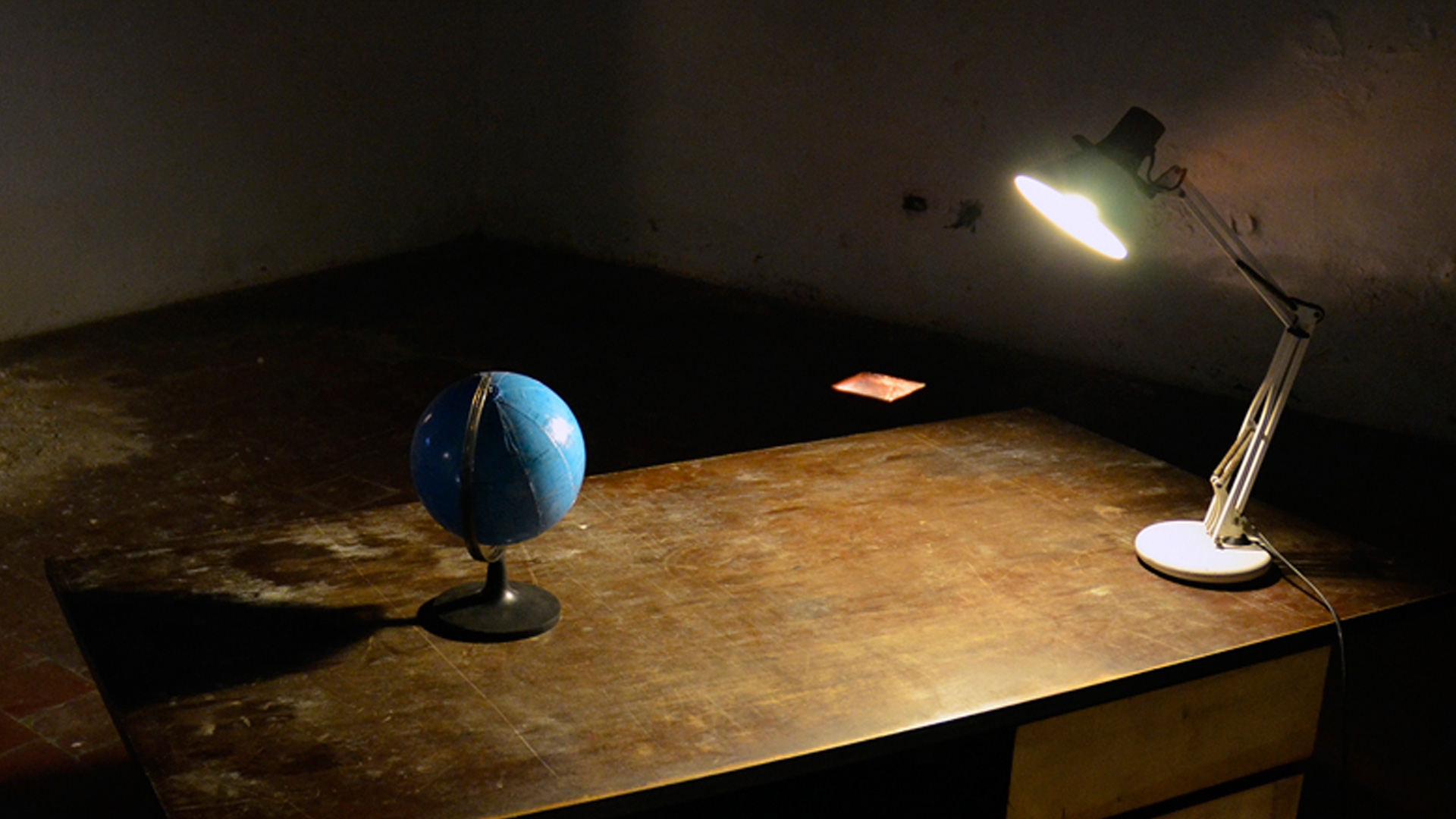 “The relationship began through the artist María Magdalena Campos-Pons, who is a faculty member here,” explained SMFA communications officer Brooke Daniels. “Jorge curated Magda’s work in the 11th Havana Biennale and also included her work in the Cuba Pavilion at Venice. Jorge was a visiting artist lecturer at SMFA in October 2011. Dilated Biography came about through a series of conversations between Jorge, SMFA curator Joanna Soltan, Magda, and SMFA president Christopher Bratton.” (Campos-Pons has two exhibitions herself this season, one at Tufts University and the other at the Stephan Stoyanov Gallery in Lower Manhattan.)

Here are excerpts from the curatorial statement by Fernández Torres, including comments on several works in the show.

“Since its beginnings, Cuba has been the result of the journeys, and of that great combination of displaced cultures that created the criollo, an idea which grew into a sense of national identity which in turn led to a variety of texts that attempted to address and understand that identity. The transformations that have occurred have different stories behind them. Cuba was, is and always will be a trans-territorial space of mutations, identities and expansions.

The Cuban Revolution was undoubtedly a universal event. However, a change of this nature—one that survived the end of the Cold War and the fall the Soviet Union—also led to polarized domestic relations and large waves of emigration. What remains is an archaeology of memories that opens the way to the power of cultural and familial identification, allowing us to reconsider Cuba in all its complexity.

The exhibition “Biografía dilatada (Dilated Biography)” represents the coexistence of different memories. It is not limited to a region or age group, nor does it emphasize any particular style or method. The only discernible common factor lies in the individual poetics. It is from there that the ideas are expressed, and it becomes an exploration of life. Its ideas are metaphorical, based on life experiences that create personal stories.

The stories behind the pieces in this exhibition are diverse. Some were created recently, while others are several years old and have already participated in numerous exhibitions, something taken into consideration during this exhibition’s planning. We designed the exhibition having in mind that the message of each piece always remains intact, and that it cannot be undone or diluted with time. Our purpose here is to create new meanings and look for the infinite number of meanings to activate the idea as a visual resource. We do not aim to include large, grand works, but rather sensitize the space with smaller gestures that remind us of the aphorisms of Nietzche and pre-Socratic philosophers.

Wilfredo Prieto, by cutting a watermelon into a square—emphasizing its redness and converting the green skin into a small support on the ground—gives us Políticamente correcto (Politically Correct), which casts doubt and irony on the artist’s ideology and behavior where it matters. With the free and radical nature of that gesture, Prieto questions the changes of ideas in art and politics as part of the same fiction.

Diana Fonseca Quinones has artfully crafted a globe where the land has disappeared, leaving the sea to cover its entire surface. The artist has us return to the very origin of life as a possible metaphorical path to reinterpret the world. Diana seeks refuge in an individual experience of peacefulness and contemplation, aiming to empty the planet of that increasing air of violence in a climax that completely surrounds us.

The actions of resistance, the national narratives and those that inspire interventionist tendencies have been marked by military strategies. Denis Izquierdo creates an interactive piece in the form of a sea urchin which he incorporates into the Aldouin system. The artist turns the missiles into tactile material, where in spite of the hedonism of their aesthetic repurposing, he succeeds in activating the paranoia produced in both those who defend themselves and those who attack. An interesting dynamic also emerges between the prohibitions and our ability to carry out our actions.

At the end of this section, we have Reinier Leyva Novo’s Nueve gramos que pudieron cambiar el mundo (Nine Grams That Got to Change the World). The coded messages between Fidel Castro and Nikita Khrushchev during the Cuban Missile Crisis—known in Cuba as The October Crisis—were recently published in Granma, the official newspaper of the Cuban Government. The artist cut out the news clippings and placed them on a scale to reveal the weight of these cut-out strips: nine grams. Novo reduces the event’s turbulence to a concise attitude that marks the tension of a text that has become a simple record; the passions of personal language in the face of universal fates.

In the center of the exhibition space, we have Eduardo Ponjuán’s Pararrayo (Lightning Rod) standing like a totem pole. The work’s height is the same as Fidel Castro’s, and consists of stacked Cuban one peso coins culminating in three sharp-pointed structures that make up the helm of a typical lightning rod. During its production, this piece had to endure the test of sea water saltpeter. Pararrayo addresses the utopias and anathemas of a country that has projected its own light and darkness with equal force.

This first section of the exhibition closes with White Corner, by Alexandre Arrechea. In this work, the artist . . . becomes the ‘Other’ of his work. There is a double projection that adds tension to the meeting of Arrechea’s two images, where the individual exploration becomes a place of confrontation for different issues unresolved throughout our history.

A second part of the exhibition can be found at the Grossman Gallery. It opens with Hair Ball and closes with Dialectic, both by Tony Labat, an artist whose lifetime body of work can be understood as a single piece. Inidividually and as a group, the pieces share the same content. Like Foucault, he questions the forms on which the moral standards that sustain power are established. His work examines the deconstruction and ironic beautification of the scatological and factual elements that have validated the utopias developed in Cuba throughout the last fifty years, both philosophically and ideologically.

Next, we have Con su propio sabor (With Your Own Taste) by Grethell Rasúa, a video-documentation focused on the essence of human nature. She uses work by Hans Hacke as a starting point to explore how biological organisms self-generate and what that implies; a resource used to investigate relations that delve into a sort of collective body art where the receiver is both object and subject of the piece. The process overlaps with the object.

The last video is Destinos Posibles (Possible Destinations) by Luis Gárciga. During a contemporary art exhibition in Cuba, Gárciga took on the personality of a local cab driver. He replaced the monetary transaction with the need to create a complicit relationship with his passengers. He accepted the obsessions, issues and frustrations of people who for the most part were very open during the journey. The authenticity of the ethics of daily life allows us to feel the true aspirations of the video’s protagonists.”

Dilated Biography: Contemporary Cuban Narratives continues at the School of the Museum of Fine Arts, Boston through October 19.