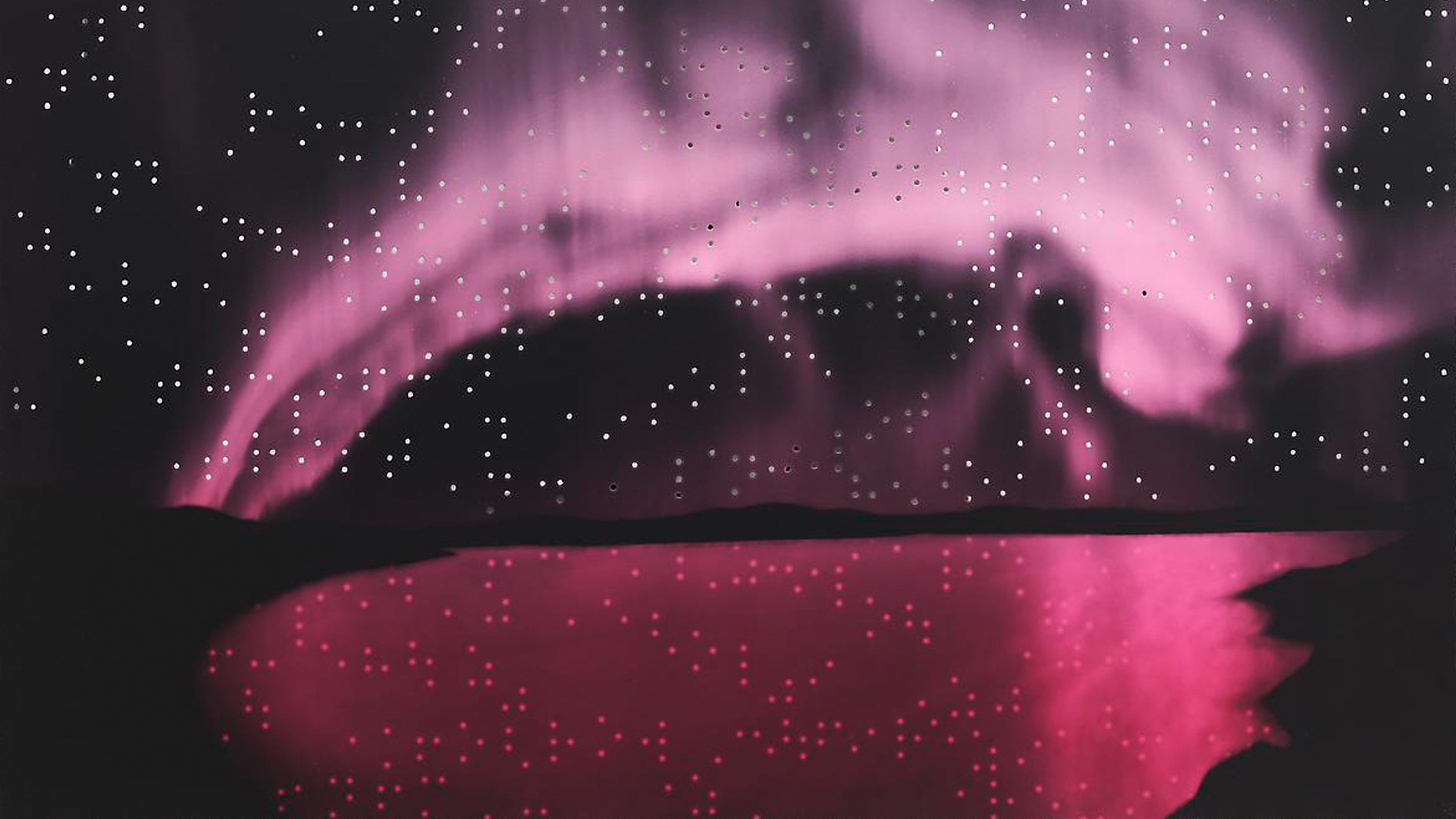 In Nocturnal (Navigation), Cuban-American artist Teresita Fernández (Miami, 1968) depicts, with characteristic eloquence, a sidereal vision of the night sky—recalling how, since ancient times, navigators have looked to the constellations for guidance. The serene elegance of the work, which extends across a floating, dark-colored wall, seems to address an inner human need for balance in times of strife and uncertainty, made all the more poignant by its location within a military building: the new U.S. Coast Guard Headquarters building in the Anacostia neighborhood of Washington, D.C.

Rising above social divisions and polemics, Fernández’s piece stands as a unifying metaphor: a universe possessing its own rhythmic logic, which, viewed from the perspective of terrestrial life, remains unchanged as entire cultures grow, flourish, and disappear.

Commissioned by the Department of Homeland Security through its Art in Architecture & Fine Arts Program, Nocturnal (Navigation) is a wall sculpture inspired by celestial navigation charts. Unveiled on July 29, 2013, the work comprises approximately 300 constellation points, resembling crystallized mineral rocks, made of polyester resin and polished brass. Fernández was interested in exploring the physical characteristics of the building’s spacious lobby and the potential for viewer interactions. Her oversized sculpture features reflective, gold-toned surfaces that take advantage of the space’s towering height and plentiful natural light.

At the back of the lobby, dark metal sheeting, recalling the night sky, provides the background for the work. The freestanding wall functions as a giant projection screen; over the course of several hours, the play of light and shadow gives the work an often-meditative sense of motion. It is a seductive piece, arousing not only a refined sense of the visual but the sensation of traveling in time—a constantly shifting dynamic that harmonizes the forces of nature with the manmade environment through the soaring glass of the roof and walls.

In her conceptual work, Fernández—a 2005 recipient of the prestigious MacArthur Foundation Fellowship—has been inspired by natural phenomena and an obsessive use of experimental material. Usually the development of an idea is followed by intensive research to choose the appropriate components. Nothing is random: Fernández’s work is the outcome of a conscious process based on the historicity and social connotation of the materials, as well as the phenomenon that originally triggered her artistic curiosity.

Nocturnal (Navigation) is another of her views of light at dusk. It builds on her recent Night Writing series, in which images of the aurora borealis form the background for a sequence of Braille writings rendered in reflective metal. With Nocturnal (Navigation), for the first time Fernández has been able to introduce natural light as an active element in these explorations, and to establish a dynamic dialogue with it. The physical appearance of Nocturnal (Navigation) changes within each day and each season, turning it into an abstract narrative of continuity. To see a time-lapse video that offers a glimpse of the constantly changing light-play, click here.

In September 2011, Teresita Fernández was appointed by President Obama to serve on the U.S. Commission of Fine Arts. Earlier this summer, she received the Aspen Award for Art from the Aspen Art Museum in Colorado, and she is now working on a large installation for the Eli & Edythe Broad Art Museum at Michigan State University, designed by Zaha Hadid. Her September show at Lehmann Maupin Gallery Hong Kong will mark the gallery’s branch opening and Fernández’s first solo exhibition in China. She is also working with curator Denise Markonish on a solo show at Mass MOCA for May 2014.