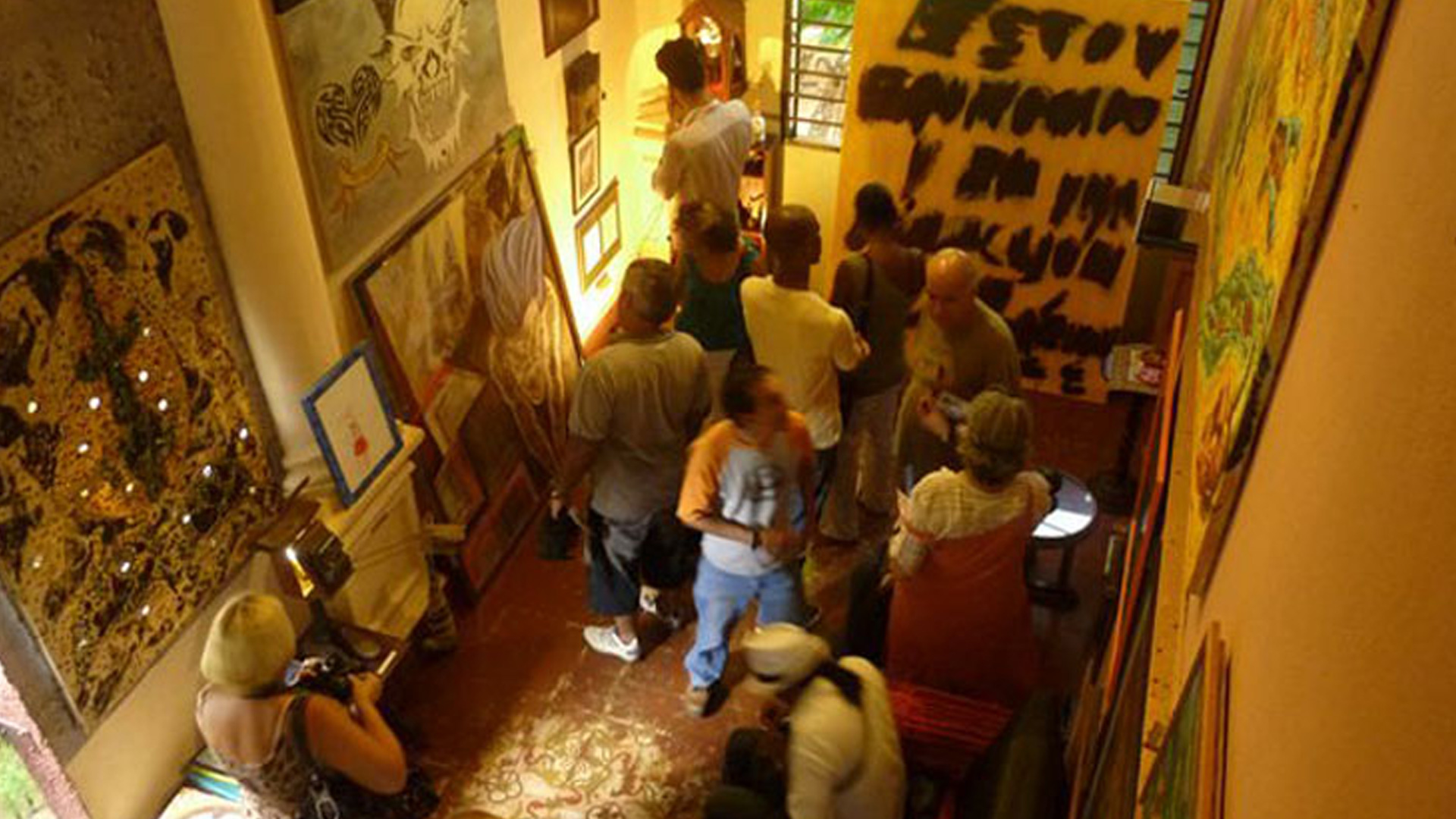 Ibrahim Miranda in Havana. “If I have said before that Ibrahim Miranda is a mythographer,” writes curator and critic Orlando Hernández, “now I would like to affirm that such mythographical drive is the direct result of his familiarity and intimacy with ink. Only ink seems to be capable of bringing out, practically off-the-cuff, these monsters and environments, the extravagant and capricious creatures born out of his imagination that we see in his works. Ink has always been the midwife of Ibrahim Miranda’s apocalyptic visions, of his revelations, and the medium that, on the other hand, allows him to express best his tragic sense of life, because ink is like the blood of mystery, the fateful, the sorrow, the funereal or in any case, of ‘the beyond’ that both seduces and terrifies us. This affords him an uncommon place in Cuban art, more willing to fill everything with colors than to explore its absence.”

Hernández’s words were written on the occasion of Exvotos, the solo exhibition of Miranda’s art that recently opened at Galería Villa Manuela in the UNEAC (writers’ union) building. The exhibition runs through this month, closing Saturday, August 31.

Drapetomanía comes to the capital. This past spring, we wrote about curator Alejandro de la Fuente’s new exhibition, Drapetomanía: Exposición Homenaje a Grupo Antillano (Drapetomania: An Exhibition Homage to Grupo Antilleano), which debuted at the Galería de Arte Universal in Santiago de Cuba. Last week, Drapetomanía came to Havana, opening at the Centro de Desarollo de las Artes Visuales (Center for the Development of the Visual Arts), where it runs through August 31. A companion book, Grupo Antillano: The Art of Afro-Cuba, was recently reviewed in Cuban Art News, and future plans call for the exhibition to travel to New York, San Francisco, and Cambridge, MA, where de la Fuente has joined the faculty at Harvard University.

Stainless: En El Monte. Until now, the carnivalesque work of the art collective Stainless (Alejandro Piñero, Roberto Fabelo Hung, and José Gabriel Capaz) has had an exuberant style that curator Elvia Rosa Castro describes as “porno-política.” But that might be about to change. The group’s new show, En El Monte (On the Mountain), takes a turn toward archaeology and an examination of Western art history, inspired by the myth of Daphne and Apollo. Or so they say: it should be noted that En El Monte opens this coming Tuesday, August 13, which happens to be Fidel Castro’s birthday—and there may be a surprise in the works to mark the occasion. The reception starts at 7 p.m. at Lloyd’s Register in the Vedado district.

Enrique Martínez Celaya: The Pearl in Santa Fe. At SITE Santa Fe, Martínez Celaya transforms almost 12,000 square feet of gallery space into The Pearl, an immersive installation environment that combines painting, sculpture, video, photography, waterwork, sound, writing, and music. The piece is structured in a way that invites viewers to move through the space, creating their own experience of a narrative in which objects, images, and references are viewed, considered, and reconsidered, similar to the way that a film, musical composition, or novel gradually unfolds over time. Recurring visual elements include images of pine trees, the ocean, a German shepherd, an elephant made of jewels, a burnt dining room set, and paintings of the past and the present. Taking the idea of home as a point of departure and destination, The Pearl explores and expands on many of the themes and motifs that Martínez Celaya has worked with over the years. The exhibition runs through October 13.

Ernesto Pujol in Istanbul. “I am a site-specific performance artist and social choreographer engaged in walking durational group performances as public art,” writes Ernesto Pujol on his web site. His latest project has taken the artist to Istanbul where, this past weekend, he choreographed a project by the performance art and “social sculpture collective” Silsila under the direction of Jeffrey Baykal-Rollins. A site-specific piece created for the Istanbul Modern Art Museum’s waterfront area, Flux brought together 20 performers in the waterfront space outside the museum, moving through space, evoking silent stillness, repetitive walking, and the gestures of traditional life in the

Yoan Capote in the Hamptons. At the Longhouse Reserve art center and gardens in Easthampton, this past weekend saw the opening of a sculpture installation by Yoan Capote. According to sources at Jack Shainman Gallery, Capote’s New York dealer, four bronzes will be on view—not only the two mentioned on the Longhouse website—including a new work, Abuse of Power (2013), depicting a handcuffed tree, that just made it out of the foundry in time for the show. The other pieces include TranSit, a set of concrete suitcases that form a bench, which has been borrowed from a private collection; and two new iterations, in bronze, of sculptural themes that Capote previously explored in other media or other dimensions. The installation at the Longhouse Reserve runs through October 12.

Julio Larraz in Medellín. The painter’s first show in the Colombian city is currently on view at Duque Arango Gallery. Julio Larras: Obras Recientes (Recent Works) features 24 artworks, including oil paintings and drawings, and remains on view through September 21.

A Poetic Reality in Miami. At the Miami Dade College Museum of Art and Design, A Poetic Reality: Magical Realism of the CINTAS Fellows Collection takes an interesting new angle on this historic collection of works by winners of the CINTAS fellowship. Showcasing work by 10 artists, including José Mijares and Ernesto Pujol, as well as compositions by CINTAS music composition fellows Tania León and Orlando Jacinto García, the exhibition delves into the thinking behind Magical Realism, a Latin American literary movement that blossomed in the mid-20th century. On view through September 21.

Ballet Photography in San Francisco. To open its new space in the South of Market district last month, the Museum of Performance + Design debuted with A Portrait of the Cuban School of Ballet, a portfolio of photographs by Bay Area artist Rebeka Bowman. The exhibition took on an added poignance with the death of Cuban ballet maestro Fernando Alonso on July 27—just the night before, the museum had hosted a panel discussion and signing for Toba Singer’s book, Fernando Alonso: The Father of Cuban Ballet. The exhibition of Bowman’s photographs runs through September 21.

For more about Fernando Alonso, see our article published earlier this year, “Fernando Alonso and the Hidden History of Cuban Ballet.”

Kózer wins Neruda Prize. Last month, poet José Kózer (b. 1940, Havana) was awarded the Pablo Neruda Ibero American Poetry Prize. Chilean Culture Minister Roberto Ampuero, who chaired the six-member jury of writers from Chile, Mexico, Peru, and Uruguay, praised Kózer as “an extraordinary poet, with a prolific body of work, internationally recognized, assured and innovative.” Born in Cuba to Jewish parents of Central European origin, Kózer emigrated to the U.S. in 1960 and taught Spanish language and literature at Queens College in New York City for more than 30 years. He currently resides in Florida. He is the author of 60 books of poetry, as well as memoirs and narrative works, and is known as an exponent of the neobaroque. The Neruda prize, established in 2004, is awarded annually to a writer whose work is considered a notable contribution to the cultural and artistic dialogue of IberoAmerica.

Here’s a video of Kózer giving a bilingual reading at St. Vincent’s College in Latrobe, Pennsylvania. It’s long, but Kózer is a compelling interpreter of his own work, so feel free to fast forward to catch him reading.