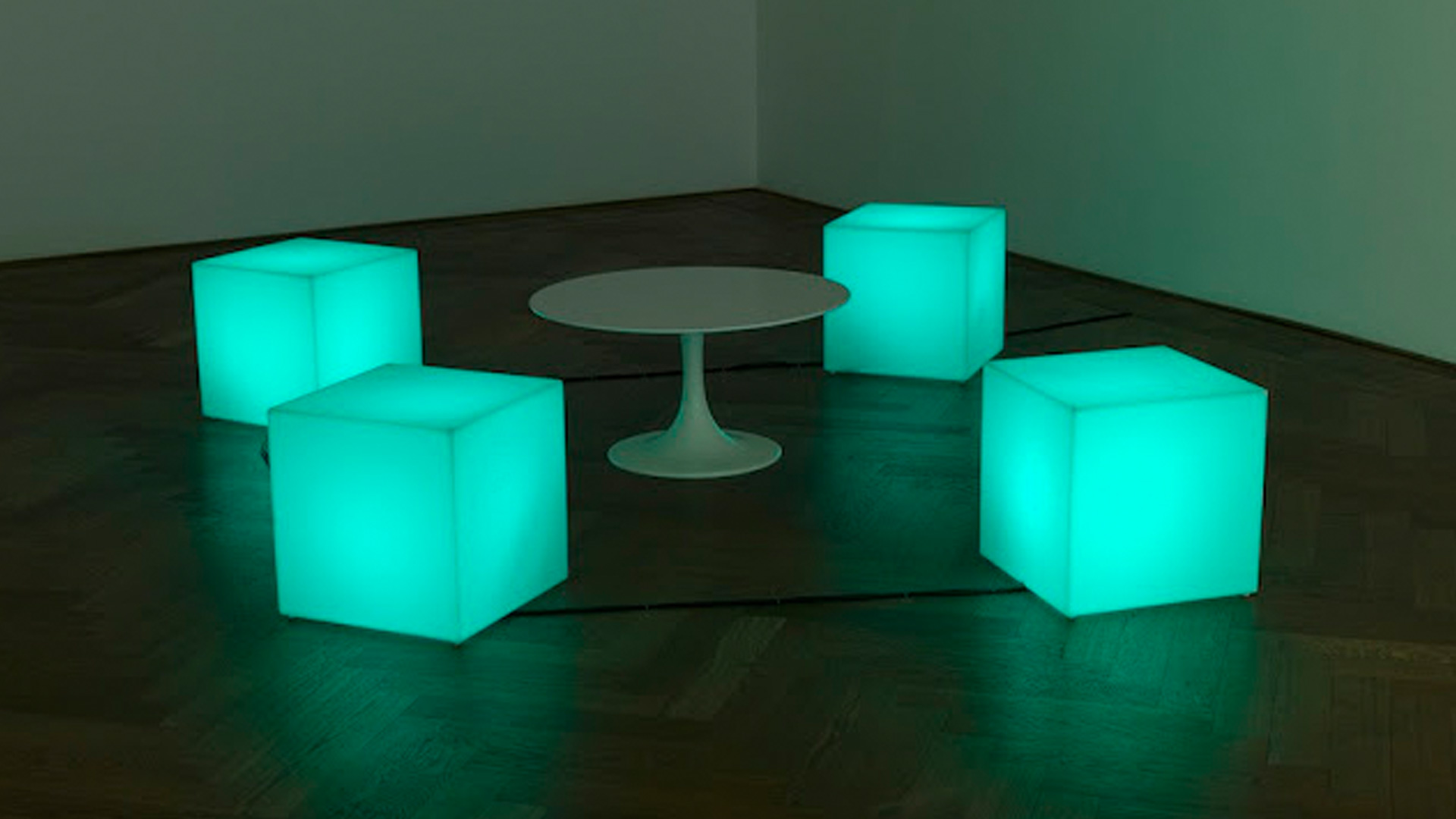 Yearning & Desire in South Florida. This past Friday saw the opening of this exhibition featuring the work of two Miami-based artists, Maikel Martínez and Eduardo Sarmiento. At first glance, the two artists’ work couldn’t be more different: Martínez paints luminous seascapes depicting Mile 45, the imagined halfway point between the U.S. and Cuba, while Sarmiento—a graphic designer and illustrator as well as fine artist—finds flashes of comedy and satire in the undertow of desire.

For the show’s curator, Ricardo Pau-Llosa, though, there’s a common thread in the dreamlike quality of both men’s work, and how yearning and desire shape our sense of ourselves and the space around us. On view through May 2 at Jorge M. Sorí Fine Art in Coral Gables.

Adrian Melis in Basel. The Value of Absence, Melis’s first solo show at a museum or arts institution, opened late last month in Switzerland at the Kunsthalle Basel. Much of his art explores the theme of workers and their work—or lack of it—in both socialist and capitalist economies. In a statement on his blog, Melis explained: “My work explores the relation between the frames imposed by the sociopolitical, legal or economical structures, and the strategies generated by persons who try to evade or subvert those rigid rules.” Case in point: his project Production Plan of Dreams for State-run Companies in Cuba (2010-2012), which harnessed the dream-power of workers sleeping on the job to generate a different kind of production. A more recent piece, Light Off(2013), is an arrangement of furniture lit from within, their glowing colors synchronized to the rise and fall of the Spanish stock market. Adrian Melis: The Value of Absence runs through May 26.

And Apócrifo in Havana. From Galería Habana comes news of another opening this past Friday: Carlos Quintana: Apócrifo, a solo show of the artist’s work, on view for the next few weeks.

Curadores Come Home, too. In 2008, Havana artist Sandra Ceballos sent out an open call inviting anyone to submit a work of his or her choice for an exhibition at her gallery, Espacio Aglutinador, that October. Titled Curadores Go Home (Curators Go Home), the result was as anarchic as the name implied.

Now, in an intriguing reversal, Espacio Aglutinador has launched a new project: Curadores Come Home. In a projected year-long program, a group of curators—carefully selected for their international experience, expertise, originality, and taste—have been chosen to present projects of their own choosing. To date, six curators have been chosen. The first project will run through this Thursday, April 10: curator Gerardo Mosquera presenting the work of Spanish video and performance artist Santiago Sierra.

Idols held over, too. In January, we also wrote about Waiting for the Idols to Fall and shared co-curator Orlando Hernández’s provocative exhibition essay. The run for this show has been extended too—catch it at The 8th Floor gallery through May 15.

Iván Acosta wins an ACE. The Association of Latin Entertainment Critics of New York—known throughout Latin America and Spain as ACE, short for Asociación de Cronistas de Espectáculos de Nueva York—will present its annual awards this Sunday evening. Among the winners: director Iván Acosta, picking up the award for Best Direction/Drama for Cuba: Punto X, which he also wrote. Alfonso Rey will receive the ACE for Best Actor for his work in the production.

Cuban Art News and Archivo Veigas. If you’ve visited the Cuban Art News Facebook page lately, you may have noticed an increase in the number of photos documenting exhibitions and openings in Havana. Many of those albums appear courtesy of Archivo Veigas, one of the most esteemed repositories of visual arts documentation on the island, and mark the start of a collaboration between the archive and Cuban Art News. Among the Archivo Veigas albums currently on the Facebook page are photos from the Eduardo Ponjúan opening at Galería Habana, Santiago Rodríguez Olazábalat the Museo del Ron, and Gritos en la pared (Shouts From the Wall), the current show of poster art at the Museo Nacional de Bellas Artes. Look for the Archivo Veigas logo to appear on several more albums this spring.