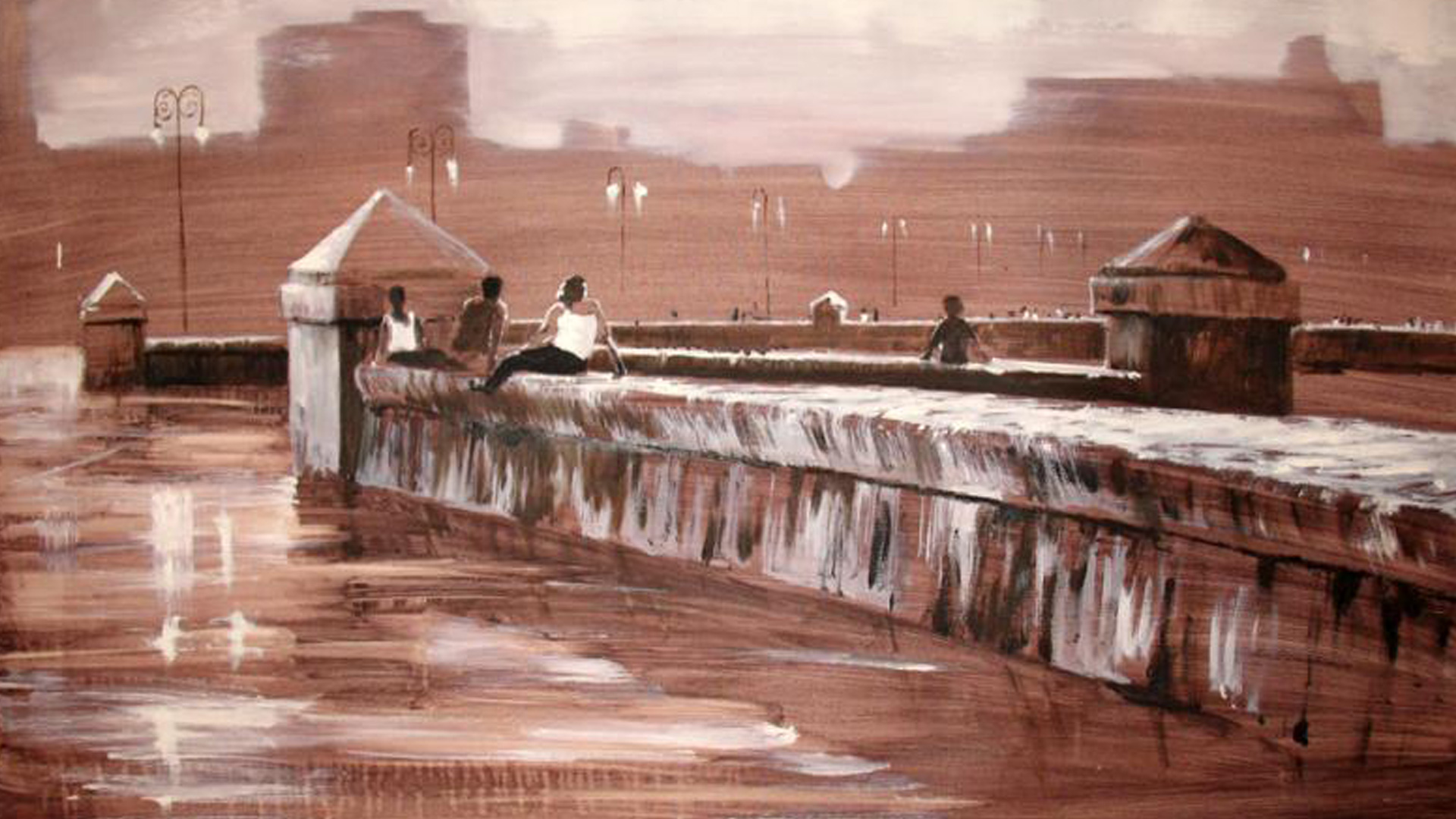 “I’m never bored, I carry my muse around with me,” says Luis Enrique Camejo (b. Pinar del Rio, 1971). He’s one of those artists who is always immersed in a whirlwind of thoughts that to invariably lead action. His ideas come from his own life, from art, film, literature… He is an observer. He can discover new concepts while talking, smoking, or taking a sip of coffee, conveying  his thoughts in a meditative look, like a mystic trying to unravel the future.

Camejo’s muse is likely to dwell in jazz, and in the other sounds that accompany his creative process. Discrete, sharp, shocking, and improvised rhythms echo in the studio near La Esquina de Tejas in Havana’s Cerro district, where Camejo works daily at his art—and his craft. He prepares brushes, sets up the easel, hunts up some water, throws colors in a basin and mixes them, then wets the canvas surface: “It is a process closely related to watercolor,” he says. “I respect this technique a lot and I always use it. Although it is usually used in small-format works, I’ve tried to extrapolate it to large formats.“ With this technique, he depicts bicycles, pedestrians, street lights, cars, billboards…

Recently, in the book Malecón, you compiled a series of paintings about that most well-known urban space. What is the most evocative feature of the place?

The Malecón is like the city drain. I don’t think anyone had ever done that many pictures about it before. It’s where people go to drown their sorrows and see the sea. It’s the border between Havana and what lies beyond. It’s a busy area—a place where everyone goes, from the most refined to the most warped. From a technical standpoint, it’s a place that’s helped me in my compositions, to create a contrast between the noise of the streets and the absolute quietness of the abyss, of nothingness.

As an artist, you’ve never identified with the rural landscape?

At 14 or 15, I came to study at the National Art School (ENA). That’s the age when you start building your friendships and having your own ideas about things. Leaving Pinar del Rio, arriving in the capital, finding the cinematheque, watching Tarkovsky and Bergman films awakened my interest in art and world culture. It was like discovering the world. I established deep ties to the city, to the urban world.

As for the rural landscape, I think there are too many people working in this field. Although there are very good ones from Pinar del Río, and the rest of the country too.

You belong to a generation of artists who, since the 1990s, were more likely to enter the international art world. How did these circumstances, this context, influence your work?

In the 1990s I was still studying at the Institute Superior de Artes (ISA). My work didn´t respond to the needs of the moment. I’ve been a bit outdated in that regard. Many friends from that time had a different relationship to the international art circuit. Their works were more narrative, more related to Cuban society and what was going on in those years. I’m more interested in problems related to art than those of society that can be shown through art. That delayed me a bit. When I´m asked what generation I come from I cannot say—unless it’s the latest, because I’m always interacting with very young people.

I’ve never followed the proper etiquette, the formalities, I fear the stigma. I’ve simply tried to be as honest as possible with my work, to please myself first.

And how do you do that?

By trying to create work that makes a real contribution to the discourse of painting.

You just mentioned interacting with young people. You were an ISA professor for more than a decade. Did teaching give you something as a painter?

In my classes I didn’t follow a program; instead, I established a dialogue with each student. It’s a satisfying approach, because in students’ questions you discover your own gaps. In their questions you find your answers.

I spent 20 years at ISA, first studying and then teaching. I recall it as my best time of life. Sometimes I go back and visit—with nostalgia—this institution that’s been such a beacon for art in Cuba.

Why did you stop teaching?

Among other things, because exhibitions and international projects took almost all my time.

What interesting trends do you see emerging in Cuban art?

These days, artists have more possibilities for travel. Unlike 20 years ago, young people today have access to every kind of information. They can compare their work with others worldwide, so the maturity level is higher. Reading a book of art history is not the same as going to the Louvre, the Prado, or the National Gallery and seeing an actual painting. In Cuba, despite the limitations in communication, the flow of information is increasing. People bring books, catalogues—I myself, when I travel, bring them back. My students found points of contact with other artists.

Also, now anyone can sell an artwork. The fact of making money with the work of your own hands, and reinvesting the proceeds in further production–that makes emerging artists self-sufficient.

Do you see creation as an act of freedom?

That’s why I’m an artist. Since I was a kid I would open those lined-paper notebooks—because I didn´t have plain notebooks without lines—and draw everything I saw.

How did you arrive at your urban landscapes? Was it a deliberate process, or accidental?

At first I started working with earth—I was close to the European informal art, to la matèrica [in which non-artistic materials are used in artmaking], and to Antoni Tàpies´ work. Little by little I started getting into painting, almost accidentally. Then, reading a book on the analytical side of modern art, I became interested in Impressionism—the theory, not the visuality. The author stated that Seurat, by juxtaposing colors, not mixing them, was creating a discourse of the painted surface. I started playing with these terms, from the self-referential starting point of self-portraits.

I think I came to urban landscapes through photography. With my first camera I took some blur images and said, “I’m going to move this into painting, to see what it looks like.” And I liked the result. I put my bet, so to speak, on monochrome painting and found in this a way to condition the gaze. It’s like looking at reality through a filter, or walking down the street with an iPod and headphones in your ears, unable to hear what’s happening around you. I think it’s closer to the psychological than to the anecdotal. It speaks to the individualization of life.

Conceptually speaking, I work with the instantaneous. I use photography as a sketch, though I don´t faithfully reflect it. I don’t take every element; I put things in, I take them out… then I go directly to the canvas. Other times I see a scene and write a literary translation of the situation I want to represent.

Editing is an important part of film post-production; actually, that’s what I called one of my shows (Montaje, 2011). You shorten, you put things together, you drive the sequence. That’s how I make my pictures: I take a photo, edit it, and paint the image I want to show. I have other works that are photograms taken from films like Blade Runner, The Bicycle Thief, and Memories of Underdevelopment… Good filmmakers, including Federico Fellini, Fernando Pérez and Tomás Gutiérrez Alea, influenced me visually and through their their ideas.

In your paintings there are rainy days and sunny. Which do you prefer?

I like the rain, the really stormy days. Maybe it’s a touch of romanticism that underlies my painting. Perhaps it’s also because I was born in January and the cold is my companion. When winter comes my creativity increases. The nebulous, misty landscapes of winter, with that patina they get, speak more fully to me, to my personality. Summer, no—I think it burns up my neurons.

What time of day do you find easiest to paint?

I don´t have a definite preference, but I think it´s better to paint by day, preferably in the morning. In my student days I got accustomed to working at night, because I had to go to classes during the day. Dawn has its own fragrance, a total quietude—there’s peace and calm. But time goes by and we have to take advantage of the nights for rest. Too, I’m the head of a family; I have to look after my two children, cook for them, look after their diet, read them bedtime stories. I try to paint when they are in school.

When you paint you listen to music. Does it move you?

Always. Jazz has a lot to do with painting, it’s very experimental. I also listen to Led Zeppelin, Jim Morrison. Soy de formación rockera—I’m a rocker at heart. I also like contemporary music, techno.

Is it hard to be original?

I’ve never liked to repeat what others do—I don’t know, maybe it´s whim of mine. I try to find something different. Art is a way of taking revenge on oblivion, but you never know if you’re going to get somewhere original. As I said, I fear the stigma. The artist faces two big dangers: one is the desire to make a mark, to be recognized, and the other, which is much worse, is how not to repeat yourself.

One of the exercises that I do unconsciously is that I’m always inventing new projects. It´s not a matter of arbitrarily changing to be novel, but of not being afraid of to seek new things in your own work. I was particularly interested in painting and I wanted my work be totally involved in this investigation. I’ve continued to pursue this line. The most important thing is to be satisfied with your work, and that the representation is convincing.

Luis Enrique Camejo is scheduled to exhibit his work in a solo show in May at Pan American Art Projects in Miami.