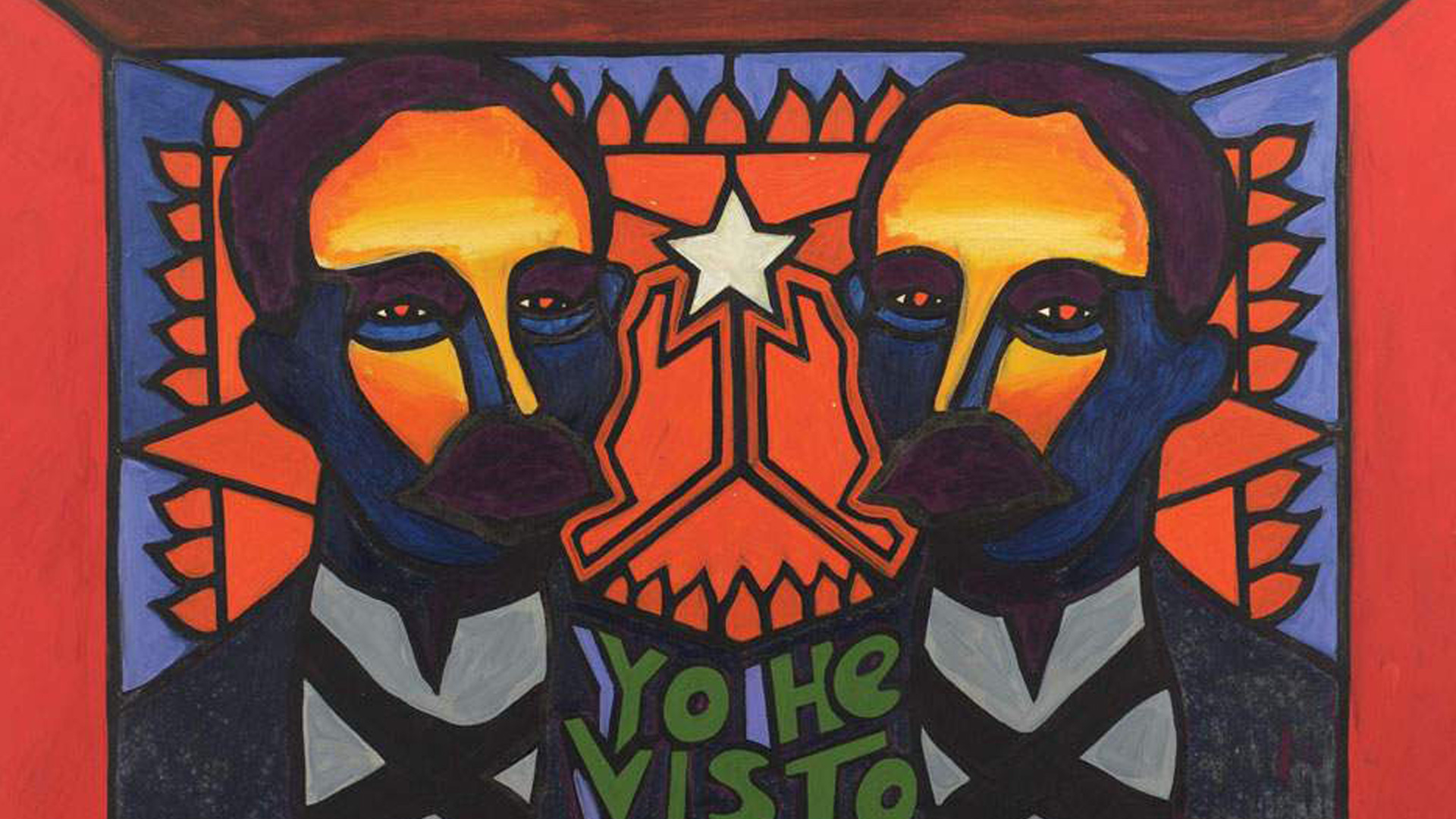 Part 2 of a presentation given at The 8th Floor in New York City by Havana curator Corina Matamoros, author of the recent book Raúl Martínez: La Gran Familia. Taken from a chapter in the book, her talk appears here in an edited version.

In 1992, I organized another Martínez exhibition. Those were the days of the event the Spanish called the “fifth centennial of the encounter between two cultures,” or what I called the colonization and sack of America. Or what my nephew calls the story of the Americans discovering Columbus lost at sea.

Raúl’s series about the conquest of America was exactly right for the moment. A series on a specific theme, it was a new statement for a master artist who constantly challenged himself. The collages were uninhibited, refined, and full of ideas. It was a dynamic, lively, and conclusive exhibition. The door to Calle 25 opened readily for me now. Raúl was in a great mood, and we reconnected as if we had just seen each other the day before.

I was immensely gratified when he was awarded the National Visual Art Prize in 1994. It was the first year of the prize, and no one doubted who deserved it.

In 2008, ICAIC asked me to do a Martínez show on the 30th anniversary of the Festival International de Nuevo Cine Latinoamericano. They wanted to pay homage to the artist who was so inspired by ICAIC, the Festival, and the famous movie posters. I returned then to Calle 25 where the voice had been opening the door since 1995, and began my lovely friendship with Estorino, who is still so generous with me. That homage and exhibition was a great experience for me. It was the first time I looked at Raúl’s work without him. And I could see how different my research process was going to be. In the future, I would be alone confronting his life and work, and would be required to understand by myself.

As I worked on this book, I proposed a show of Raúl to Alberto Magnin for his New York gallery. Raúl admired—a lot—North American culture. And for me it was a great challenge to take the work to the city where it should have been shown long before. Magnin immediately accepted, and the show took place in July-August 2010 in the Magnin Metz Gallery in Chelsea.

It was something of a risk to present an artist who had only participated in some group shows in the United States and whose work was very unknown. With this exhibition of 43 works, which I called Eagerly Awaiting, after one of his latest canvases, I tried to touch on aspects of his entire career. I had to interrupt the book to write a condensed essay that would explain the long path of the artwork to a public that was not familiar with the artist or his canvases. It was an ardurous task, but again, I was happy to have given Raúl a present he would have liked. An intelligent review of the exhibition in the New York Times convinced me that this work was not in vain.

During most of my career, I have worked with young Cuban artists. I have known many different personalities, and when someone is very difficult, I think of Raúl. He is my reference point. An artist can be many things, but if he is really good, he will know his true place in the complex world of art. Raúl was always a very sincere person, and modest about his work, and I really appreciate those qualities. With him, I learned about the contradictory aspect of art and what makes a great artist.

To tell the truth, I often would like to return to ask him things. And I wouldn’t mind at all if he tried to close the door on me again at Calle 25.

Raúl Martínez: La gran familia is available for purchase at the Museo Nacional de Bellas Artes, Havana and in the US through Pan American Art Projects in Miami (via email at miami@panamericanart.com) and Magnan Metz Gallery (Taylor@magnanmetz.com) and Cuban Art Space (cubanartspace@gmail.com ) in New York. The list price is US$50.