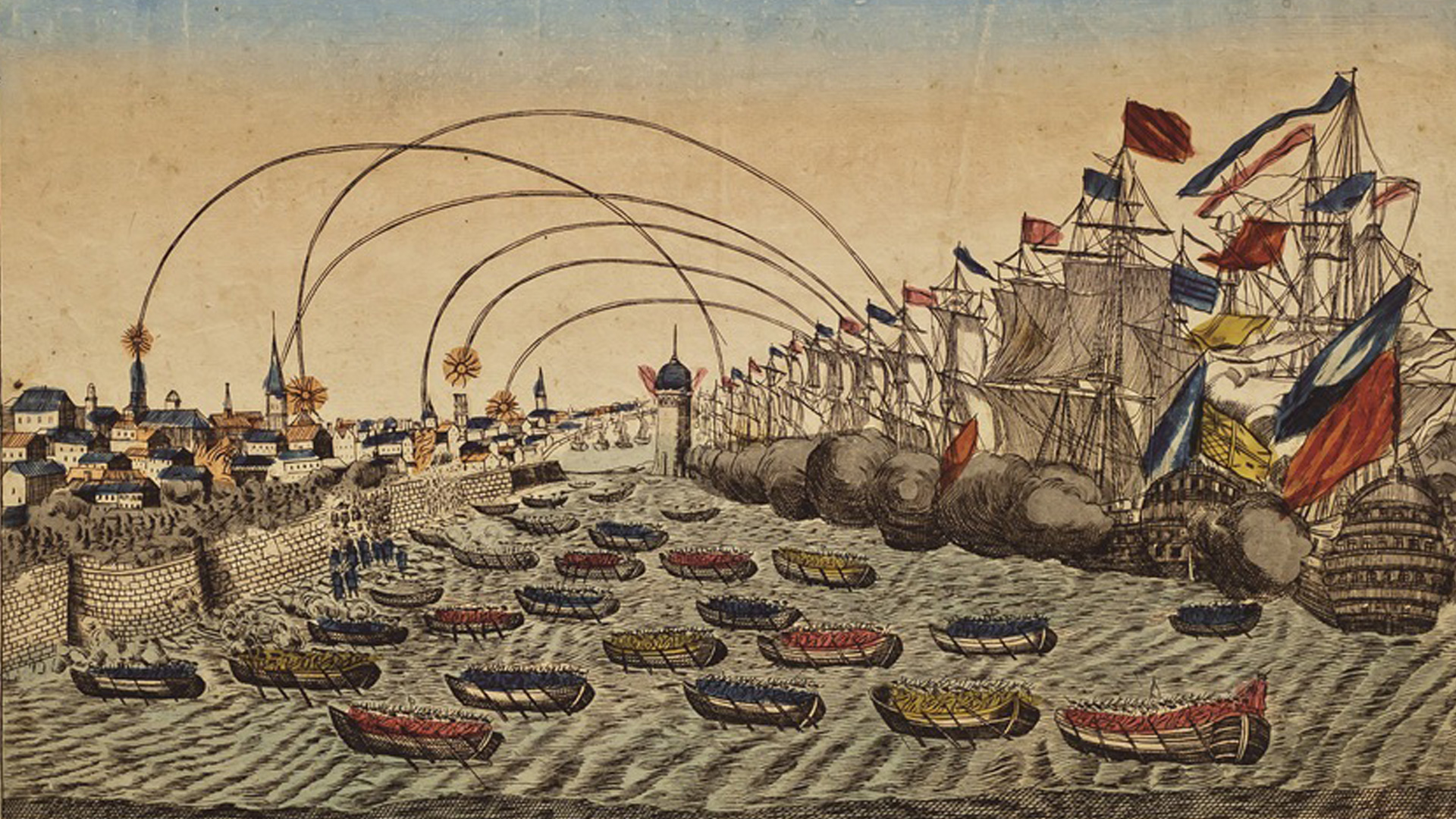 In 18th-century Europe, many artworks depicted alien and exotic locales. Influenced by expeditions of exploration, and the widely accepted myth of the noble savage, these drawings, watercolors, and engravings depicted the territories and inhabitants of North America, Asia, and the islands of the Pacific Ocean and the West Indies. Many of these works were published and circulated in the form of beautiful travel books.

But the views of Cuba that were made at the time of the surrender of Havana to British troops in August 1762 used a different set of aesthetic codes. At the time, these works were circulated in England and throughout Europe as a visual testimony to that great event. They included not only the most significant battles but views of the city and its surroundings, providing a detailed depiction of the new overseas possession. They were intended to illustrate a political and military fact of great significance for the British crown.

These engravings, created under British sponsorship, are a valuable antecedent to the realistic representations of the island made during the 19th century. The presence in Havana of artists accompanying the British troops resulted not only in purely military artistic works but in some cases a sympathetic view of everyday urban and rural environments.

The best-known representations of the events, and of the city, are the illustrations of Dominic Serresand Elías Durnford. Other less well-known works are preserved in important Havana institutions, such as the Office of the Historian of the City, the José Martí National Library, and the National Museum of Fine Arts. Although some are oil paintings, most are drawings printed by intaglio techniques of the time.

To better understand the aesthetic principles behind these engravings, it’s necessary to understand the social importance of an artistic genre that was popular during the 18th century: topographical painting and its expression in the so-called “perspective view” (vue d’optique in  French, from the Italian veduta dal vero, or view of the natural), which is defined as an objective and realistic reproduction of part of a city or region.

In the early 18th century, many topographic artists worked in Britain on the publication of books that illustrated the rural properties of well-to-do families. These artists were mainly asked to create accurate representations, and as a result they rid themselves of conventions of taste and acquired the ability to learn directly from nature.

The term perspective view, or vue d’optique, is used for a particular type of horizontal printing format. It was created in Britain and was well accepted in Europe during the second half of the 18th century. The perspective view almost always reproduced views of cities but could include other themes, such as historical or Biblical stories, with the title printed in one or more languages. These were usually colored, and all had more or less the same dimensions in order to fit the device used to view them. Such devices magnified the image with a lens and a set of mirrors to achieve a three-dimensional appearance. These devices were always found in wealthy houses, whose owners willingly acquired the prints to enjoy them in social gatherings.

Often the artists had not visited the places they depicted. In this regard the views associated with the siege and subsequent British governments in Havana are unique, as most of the artists were witnesses to the events and the social atmosphere of the city. These works show the formal aspects of topographical painting that yielded accurate representations: views taken from ground level or from a slight elevation with a central point of view, and with overhead light to visualize distant details. Much of the commercial success of the Havana engravings is due to the perspective views sold by London publishers John Bowles (c. 1701-1779) and Robert Sayer (1725-1774).

Field Marshal Sir William Harcourt, third Earl of Harcourt (1743-1830), a leading figure in the court of King George III of England, was aide-de-camp to Lord Albemarle, commander of British forces during the siege and occupation of Havana. To Harcourt’s love of drawing we owe at least two views of Havana that are of particular interest. They veer from the usual topographic precision and offer an early graphic view of the Puentes Grandes area—the so-called Molinos del Rey (King’s Mills)—where tobacco was produced as snuff for export to Europe. The sentimental representation of a rural atmosphere, where the tobacco mills are discreetly visible, shows that Harcourt intentionally wanted to depict the production of the main economic resource in 18th-century Cuba, then in British control.

The important views of the walled city by Elías Durnford (1738-1794), an officer and civil engineer under the Earl of Albemarle, have been studied thoroughly. But his view of the outskirts of the city—showing the elevation where the Hotel Nacional is currently located—depicts a cannon battery named for one of the British junior officers, Sir William Howe (1728-1814), commander of British forces in the U.S. War of Independence and adjutant general during the Havana seizure.

The topographic objectivity of this view reflects two characteristics of Durnford’s works, a delicacy in drawing and the representation of a somewhat bucolic and tranquil environment. The drawing was etched by Paul Sandby (1730-1810), one of the most inventive printers of his time, and printed by another important artisan, Edward Rooker (c. 1712-1774).

Durnford also drew a “View of the entrance of the harbour of the Havana, taken from within the wrecks.” (See it on the Cuban Art News Facebook page). This careful vista not only testifies to the results of battles—the shipwrecks—but it also numbers its noteworthy topographic elements: 1. The signal house in the Morro; 2. Apostles Battery; 3. Shepherds Battery; 4. The Cavannos; 5. Ships sunk in the entrance of the harbour; 6. Man of war towing out between the wrecks; 7. Ft. Punta; 8. Nth Bastion. It  was engraved by Pierre Charles Canot (c.1710-1777), a Frenchman based in England from 1740, who was appointed Associate Engraver of the prestigious Royal Academy of Arts. The title of the print is given in English, French, and Castilian.

An 1818 reprinting of a Morro Castle view from a plate engraved by Canot indicates that, almost 50 years after the events, these images of English Havana retained their charm. It was published by Robert Laurie and James Whitle, major publishers in the 18th and 19th centuries. The artist is identified as an officer who drew “in place.” His identity is unknown, but it might be William Marlow, who perhaps was part of the occupying army. Two of Marlow’s works are preserved in Havana: A view of Morro Castle from the sea (Museo Nacional de Bellas Artes) (also on the Cuban Art News Facebook page), and A view of the city from El Morro (Office of the Historian of the City of Havana). Both works are oils on canvas.

Louis Joseph Mondhare, an active print publisher in Paris in the 18th century, created a striking artwork that departs from topographic standards. Aimed at a less demanding clientele, it presents a very colorful, naïve composition, with blue, red, and yellow used in flags and boats, and the depiction of shells bursting over the city—their trajectory from the ships is traced in semicircular lines that give a certain dynamism to the work. This imaginative representation of the city, the walls, and the Morro puts this work in the category of those fanciful images of Havana spread all over Europe during the 17th century.

The work of renowned English artists and publishers enriched and diversified the imagined Havana after 1762. The examples discussed here demonstrate that, for cultural and political reasons, topographic pictorial accuracy prevailed in these illustrations of British domination. To a lesser extent, other aesthetic approaches also appear—perhaps due to an easing of the aristocratic and bucolic representations of landscape, or the lack of skill of an anonymous artist depicting the subjects for popular consumption.