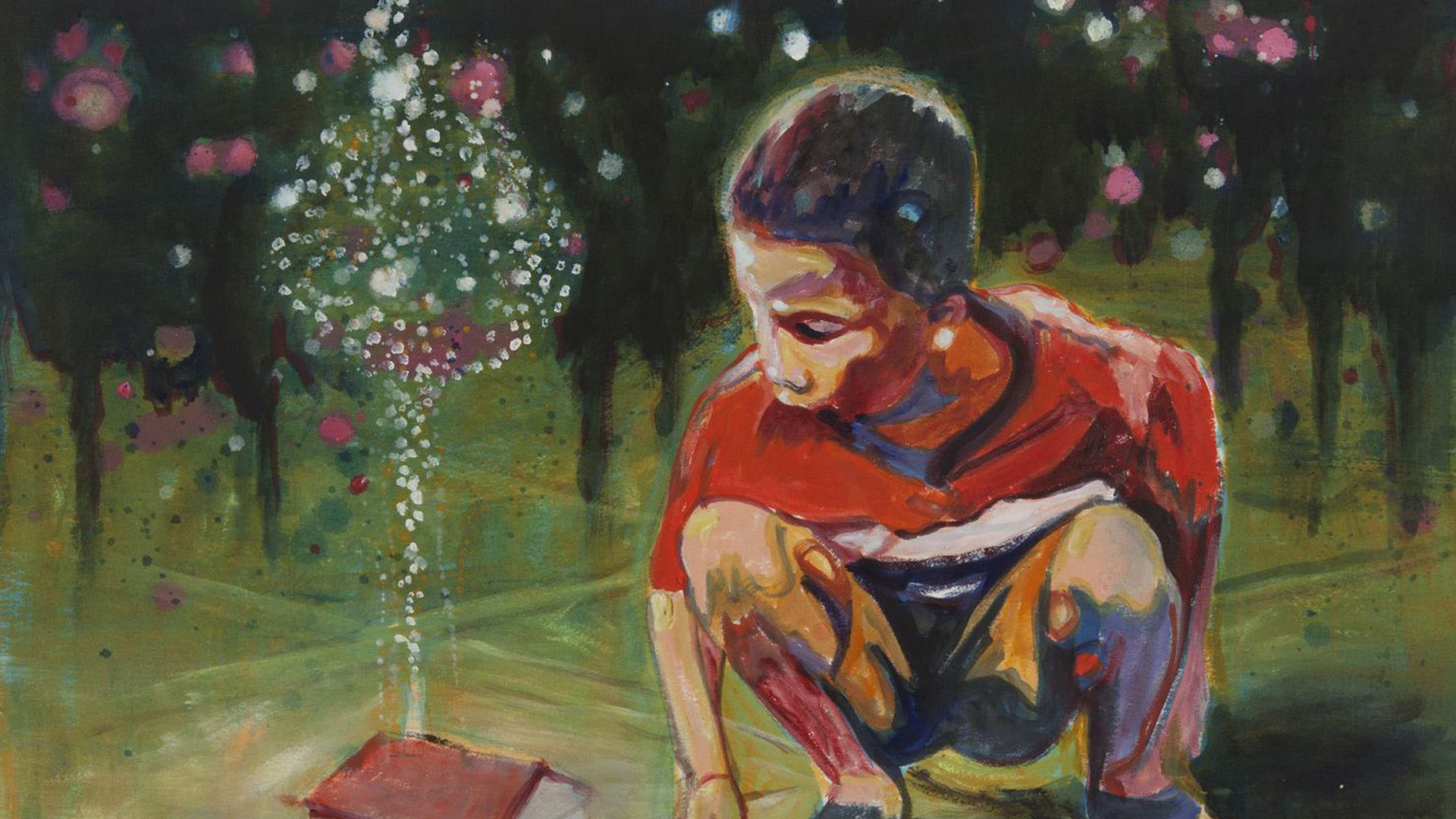 In Part 1 of our conversation, Armando Mariño talked about his artmaking process and began to take us around his exhibition, Armando Mariño: Recent Paintings from the Year of the Protester, which tonight, May 2, at The 8th Floor gallery in Manhattan. Here, the conversation focuses on specific works in the show. (For images of the works, see the photo album on the CAN Facebook page.)

Tell us about the images you worked with in these pieces.

As you can see, there aren’t that many different images in the show. The mask and the hoodie, the cover on the face of the protester here—these are very important in the show. Because we’re talking about people who hide their faces. We’re talking about personas, which in Greek means “masks.” So you’re not showing your self, you’re showing something else. But it’s also about delinquency, about protest, about not showing who you are exactly. And there’s something mysterious, and also threatening and malicious, in the mask and the hoodie and all those objects we use to hide ourselves in society. And that makes a very wide spectrum for knowledge because masks can be about a toxic environment, but they can also be about fire, about anti-police disturbances, delinquency, anything.

[Walks over to a large canvas near the front of the gallery.]

For instance, this painting. When I started it, there was no mask on the girl, just her face.And I never liked it. I liked the entire painting but I never liked the face. I finished the painting and continued working on the others. And after two months, one day I turned around and saw that painting and I said, “You know what? I’m going to paint a mask on this girl.” I did, and then everything in the painting made sense for me.

The title came later. I was reading a book about a painter, I always forget his name. There was a phrase in the book: The Farmer’s Daughter. And I said [snaps fingers] “This is the name of my painting.” It doesn’t say anything, but at the same time it means a lot. Because we’re living in this time of biogenetic food, organic food—we hear all the time about farmers against those big companies that do those genetically engineered foods. [Turns back to the painting.] And also all those black birds running, flying. You know when you see birds running away, it’s because something really bad is coming. And the girl is standing there, and this mask introduces a dramatic and very powerful element in the painting. And I thought, “That title’s going to be fantastic for it.”

What about this one?

It’s called Where’s My House? I took the image from a boy who lost a house in China. The house was bought by real estate speculators and they’re removing poor people everywhere. At first he was just standing on top of the house. But then I figured out that the house had become something very little for him. Suddenly for him the house just vanished, it just disappeared. It became more a toy or a memory or something imagined, that he can beat or destroy out of his anger at everything. So I made it this very romantic, dreamy kind of painting, just taking off from that.

Here’s another house. It looks like houses are another recurrent image in the show.

A house has always been a big deal for me, because I’ve been moving around so much. So a house as a subject is a good subject for me to paint, not only because I like the architecture and there is a lot beauty in the meaning of the home. But also because of my displacement, my nomadic life. It’s a recurring subject in my work.

And the name of this one?

It’s untitled. It’s just a study I was doing for a larger work. This originally came from a tree-house. I was trying to provoke something—to make it dark inside with all that green coming from outside. It was more painterly. I don’t know if I’m going to do a full-scale “definitive” version.

[Walks into another gallery.]

There are only a couple of paintings in the show related to Cuba. This was a study of that one. I call them Riders, because when I was a child I used to make that type of toy they’re riding on—a platform with three wheels. And we just rolled away on the streets of Cuba. The reason I include them here in the show—it’s an ambiguity, because they’re not protesting, they’re playing. But they’re potential protesters, sooner or later. And I just wanted to express the idea that in this kind if divertimento, sooner or later they can become opposed to the government. Because this is in the spirit of the child, just playing. But that doesn’t mean that they don’t belong to that environment of protest. I also wanted to include them because it’s a different subject—another angle on the kind of society we’re living in nowadays.

[Walks to the front of the gallery space.]

The Red Boy over here has at the same time anger in his expression. That’s what I like about it. It was a photo taken of a boy in Havana, also playing with one of those wheeled riding toys. But the way he was looking at the photographer is what impressed me. There is some kind of tigerlike anger. This is a potential way of being a protester, and I wanted to catch that spirit. It’s called Red Boy, not just because I painted it red but because that’s the Communist color.

The background is dirty, imprecise. It’s something you don’t see, which is what will happen in Cuba in the future. It’s very powerful, this painting. It’s small, but very powerful. Also because of the way he’s looking at you. He’s one of the few figures in the show who really has a face. He’s not afraid, he doesn’t hide it. He’s a child, and he doesn’t understand what’s going on, but he doesn’t feel right. Also, he’s very compressed in the painting. I wanted to make him minimal Like a bad dream. [laughs]

[Walks along a wall hung with smaller paintings.]

This is a funny one. It’s called The Happy Protester. This one is my favorite—being a protester and running around with all those balloons. It’s very sarcastic and satiric.

Yes, yes, all those nice balloons. It reminds me of those protesters who went straight to the police with flowers or something, trying to convince them not to repel them but to join them. Because in the end, it’s just the uniform that makes the difference. Those police, maybe they get cut from the government and they go join the others the day after. And who’s going to stop them? It’s happened many times.

Armando Mariño: Recent Paintings from the Year of the Protester opens tonight, May 2, 6-8 p.m. at The 8th Floor gallery in Manhattan. RSVP is required.