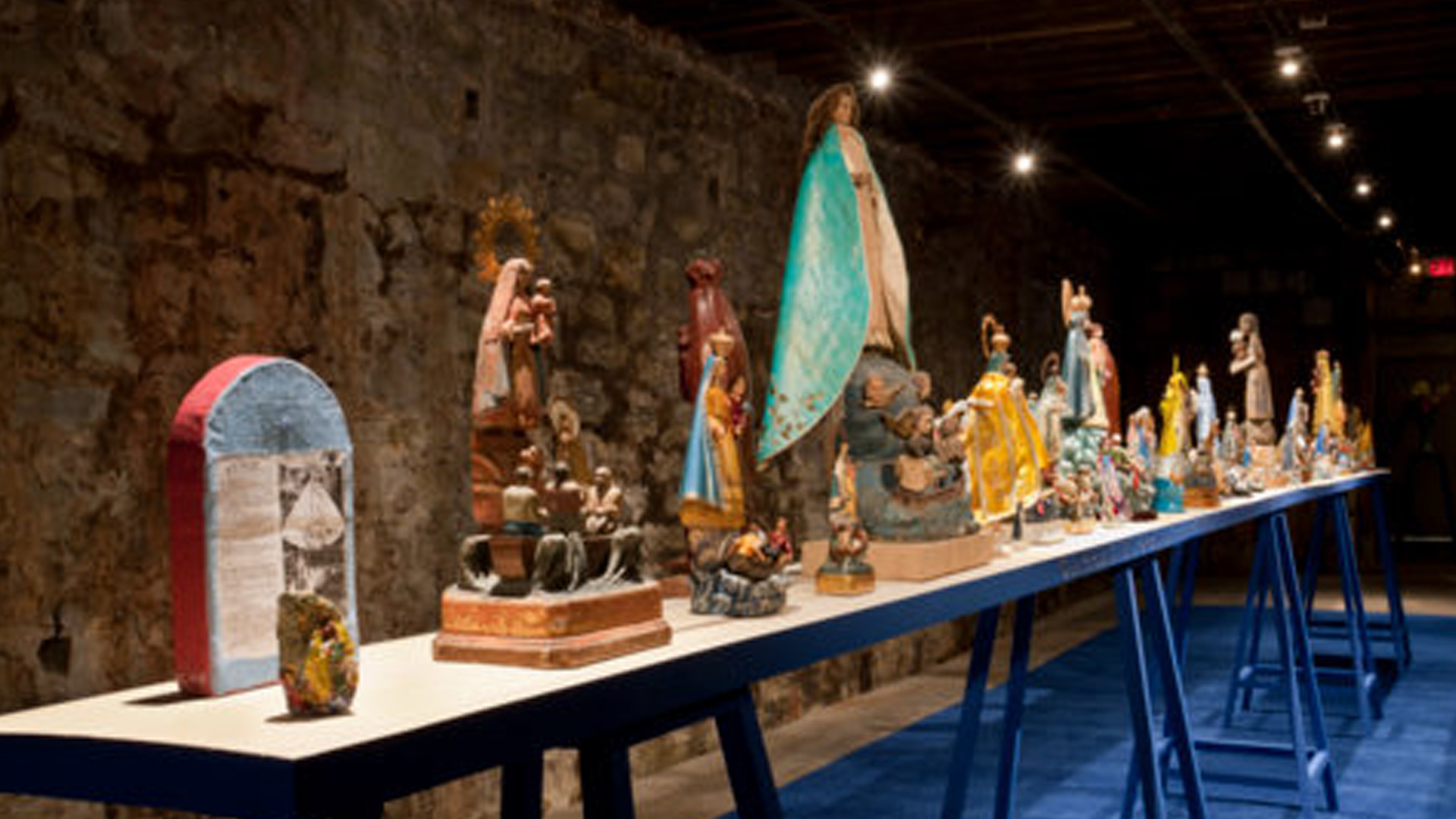 Regarding La Virgen de la Caridad del Cobre, works made in 1991 by Esterio Segura are also of interest. Pieces from that time were presented as small altars; the manipulation of the Virgen del Cobre image made it possible to question the ideology of the revolutionary project, which had been thrown into crisis with the collapse of the USSR. In the piece titled Virgen de la Caridad del Acero (Virgin of Charity Made of Steel, 1991), the artist matches, in a masterful gesture of partnership, the silhouette of the religious figure with the profiles of the official Soviet sculpture The Worker and the Farmer. Against a foreign paradigm that failed miserably, the artist here poses one of his own, which stands in an attitude of survival and resistance. In Virgen de la Caridad at War (1991), the prophecy becomes a bellicose curse, as the fate of Cuba—a vulnerable alligator in the lap of a rifle-carrying Virgin—hangs precariously in the face of the inexorable crisis, at the hands of a merciful intercessor.

Indeed, for those who, with adult consciousness, lived through the hardships of the so-called “Special Period,” the early 1990s are remembered as the sensation of plummeting from an unusual precipice. In this context, Lázaro Saavedra—one of the few renowned artists of the 1980s generation not to join the massive wave of emigration—painted an enduring image of the Caridad del Cobre in oil on a cardboard, which he titled Con la fuerza del ejemplo (With the Strength of the Example). The scene he depicts is one of silent anguish: the three Juans no longer control the boat, buffeted by the waves of a tremendous storm. Leaving behind her heavenly halo and the material elements of her iconography, the Virgin jumps into the boat with the Christ Child in her lap and begins to row.

There is no shortage of works that associate this gesture with the migratory phenomenon of those years, which would soon give rise to the so-called “rafter crisis.” In this work, we tend to think that the artist, rather than signaling a means of escape, uses the image as an eloquent metaphor for the Cuban social situation. In this context, under the official slogan “With the strength of his example”—a reference to Che Guevara—the Virgen de la Caridad takes the reins of Cuban’s collective destiny into her own hands, as the nation’s strongest and most determined spiritual leader.

After the “storm” that shook the foundations of Cuban society in those difficult years, there was a beneficial peace in the Cuban ideological scenario, which allowed our artists to become more comfortable in exploring disparate interpretations of issues that were previously relegated, stigmatized, and even outlawed.

The artist Agustín Bejarano has frequently explored the theme of la Caridad del Cobre since 2001, when he inserted it into parts V, VI and VII of his series Metaphors of Salvation. In these works, the artist proposes a certain proximity between the historical figure of José Martí and the image of theVirgen de la Caridad in the collective Cuban imagination. Quite interesting is the reversal of symbols proposed in Part VII—where the winged Martí, in a devotional posture, guards a small bust of La Caridad with a palm branch—which has come to be a sacred image and an allegory of Cuba.

The vision offered by artists José Angel Toirac and Meira Marrero in their work Ave María—a 2010 installation of variable dimensions—is an excellent coda to this brief survey. The piece presents, with minimalist rigor, twenty-five popular Marian images: a simple base attached to the wall, on which vastly different representations of La Virgen are arranged in order, as if they were a straightforward ethnographic display.

As a result, the diversity of these Cuban Marías becomes a de facto summation of the ethnic and cultural roots of the nation, through variations in morphology, size, materials, pigments, concepts, and techniques. They are simultaneously cemíes [Taíno worship figures], saints, rustic carvings, prints of popular prayers, standardized folk-art models and treasured cult figures, revealing all kinds of misery and riches, happy or mournful emotions, all sorts of reconciliations, acceptances, tolerances and substrates of an inclusive spirituality in the process of growth and sedimentation.

In religion in general, and more specifically in the Virgen de la Caridad del Cobre, the visual artworks of the past two decades have led to highly useful reflections on issues of identity, and in its continual, healthy, and dynamic updating.