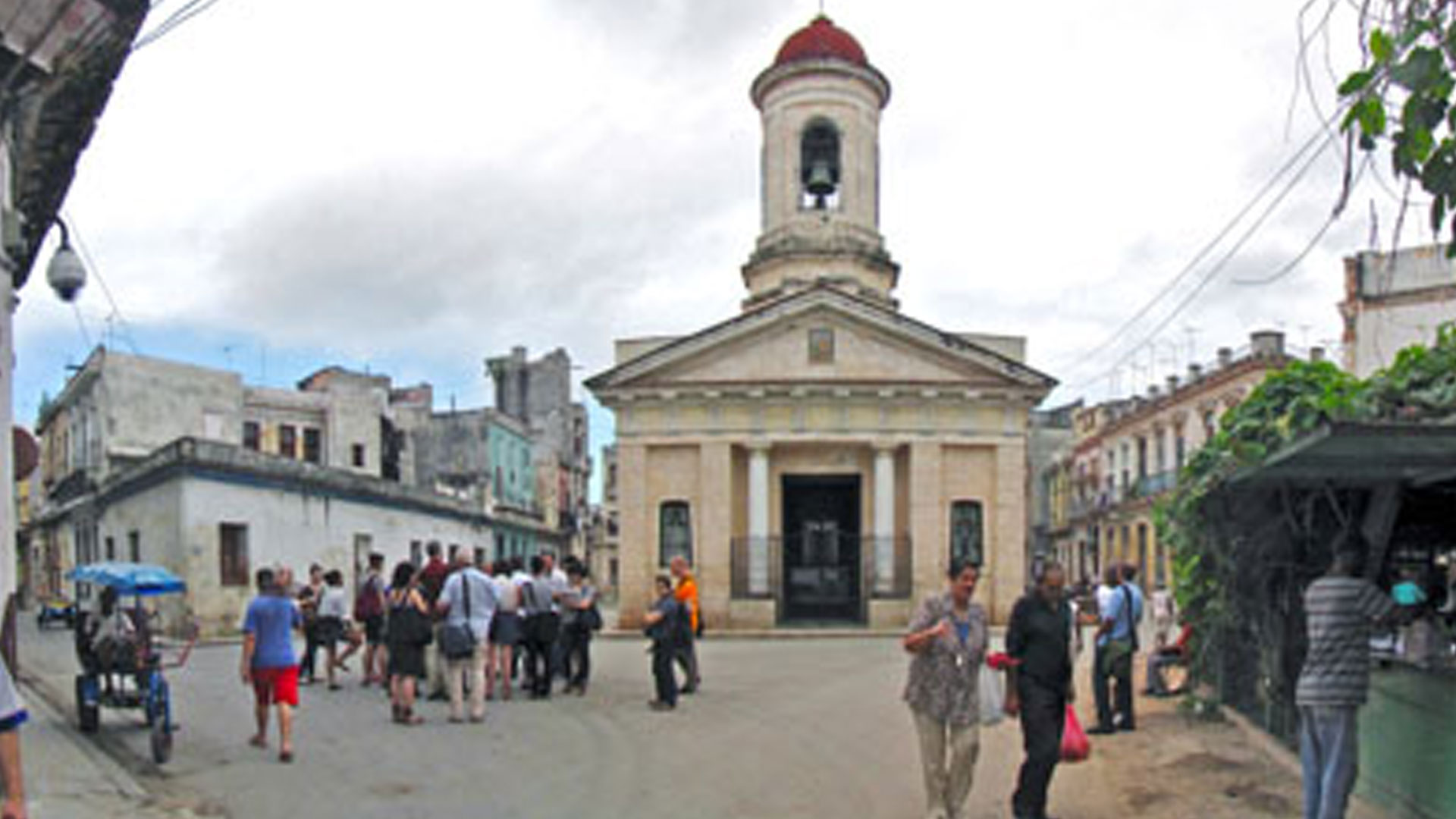 For many Habaneros, Centro Habana is the heart and soul of the metropolis. The Charrette study area, Barrio Los Sitios and its immediate surroundings, is one of the oldest and most interesting parts of Centro Habana. Home to some of the city’s most significant landmarks—Parque de la Fraternidad, with the Palacio Aldama and the Capitolio, the ITT building in Barrio Chino, the Central and Cristina railroad stations, the Tallapiedra power station, and Cuatro Caminos Market—it also has a range of urban environments, from dense residential to vehicle-oriented industrial.

The website for one of the Charrette’s sponsors, the International Network for Traditional Building and Urbanism (INTBAU), gives some background on the Centro Habana district:

“Centro Habana was the first suburb of Havana and its origins date back from the early 1700s. A small church devoted to the Virgin of Guadalupe in 1716 would define the so considered first neighbourhood (at Monte and Aguila streets) while the relocation of the Real Arsenal in 1734 to the South by the Atarés area and the lay out of the Alameda de Extramuros … also contributed to the expansion of the city.”

“Centro Habana is the most diverse district of Havana, the most densely populated and the most dilapidated. Due to the lack of open space and high density, the current population of about 154,000 is considered to live in extreme environmental conditions with ambient temperatures 1.5 centigrade degree above the average of the city. Green scarcity also contributes to the heat increase.”

Barrio Los Sitios proved to be an excellent place for charrette participants to test ideas about both urbanism and sustainability, which were made all the richer for the group’s diversity of skills. Nils Larsson, executive director of the International Initiative for a Sustainable Built Environment, briefed participants on the benefits of the integrated design process. Oscar Jaime Rodríguez of the Office of the Historian of Old Havana provided teams with valuable background information while also promoting the benefits of urban recycling.

Italian Professor Graziana Santamaria demonstrated theories for optimizing terrestrial energies to recently-graduated American architect Chad Jones and others. Lawyer and developer Vance Gragg joined forces with Australian Vincenzo Zaccardi to highlight the practical challenges of implementing theories of urbanism while Stephen Waite, sustainable building use expert, found an addition to his collection of traditional materials from all over the world. Professor Janine Debanné brought her students from the Azrieli School of Architecture and Urbanism at Carelton University to tour with the charrette and observe its progress. John Pilling and his teaching colleague, Luis Montalvo, introduced their students from the Boston Architectural College to the charrette at its opening reception.

Cuban architects Julio César Pérez, Joel Estévez, and Alexis de la Cruz guided the group through the study area on the first morning of work. Following afternoon briefings by Pilling and Pérez, participants broke into three teams to study and propose ideas for different parts of the district. Each team chose a key artery and a specific locale for examination: calzada Reina/Zanja and Barrio Chino, calzada Monte and the Arsenal district, and calzada Belascoín and Cuatro Caminos.

At the outset, several objectives were proposed by the Charrette’s organizers. Over the course of the week, the ones that proved most important were to:

Audun Engh opened the Charrette’s final presentation with a briefing on how the charrette methodology supports urbanism in Norway. Then each team presented its recommendations for discussion by the audience of Cuban and international guests.

The Reina/Zanja-Barrio Chino team proposed to create a green network by developing sites of building collapses between Reina and Zanja into park spaces, and to identify and protect as landmarks worthy buildings in anticipation of future development pressures. They suggested promoting a mix of uses that would favor residential use nearer Belascoín and commercial use toward the Capitolio. They also proposed an infrastructure for neighborhood-based recycling.

The Belascoín-Cuatro Caminos team envisioned a transformation of the area around and including the Cristina station, the Cuatro Caminos Market, and the Tallapiedra power station. Since the Cristina station is planned to replace the Central station as the principal rail terminal in Havana, the team proposed the means to expand the station, rehabilitate the market, and transform the industrial highways into more pedestrian-friendly boulevards. There were also proposals to strengthen the presence of Havana Harbor’s Ensenada Atarés in the district.

The Monte-Arsenal team designed an extension to the green spine of the Prado that reconfigured the Parque de la Fraternidad, closed calles Cárdenas and Cienfuegos to traffic, and developed a new neighborhood on the rail yards of the Arsenal district. For sustainability, they proposed a system of bike paths and a means for integrating photovoltaic panels, a recycling center, and a solar wastewater treatment plant into the urban fabric. They tackled landscaping on the relatively narrow calzada Monte with trellises and aerial plantings.

Every evening, team members enjoyed informal dinners together. The highlight of their social activities was the reception hosted by Norwegian Ambassador John Petter Opdahl at his residence. There, Charrette participants joined students and faculty from the Instituto Superior de Artes to enjoy the beautiful location and talk about design. The Charrette’s sponsors, the Cuban and Norwegian Chapters of the International Network for Traditional Building and Urbanism (INTBAU) and the Council for European Urbanism (CEU)recognized and thanked The Royal Embassy of Norway in Cuba for being its patron. In what is becoming a tradition, most of the participants concluded the Charrette with a celebratory dinner at the restaurant La Roca in El Vedado.

Plans are already underway for next year’s conference and urban design charrette.