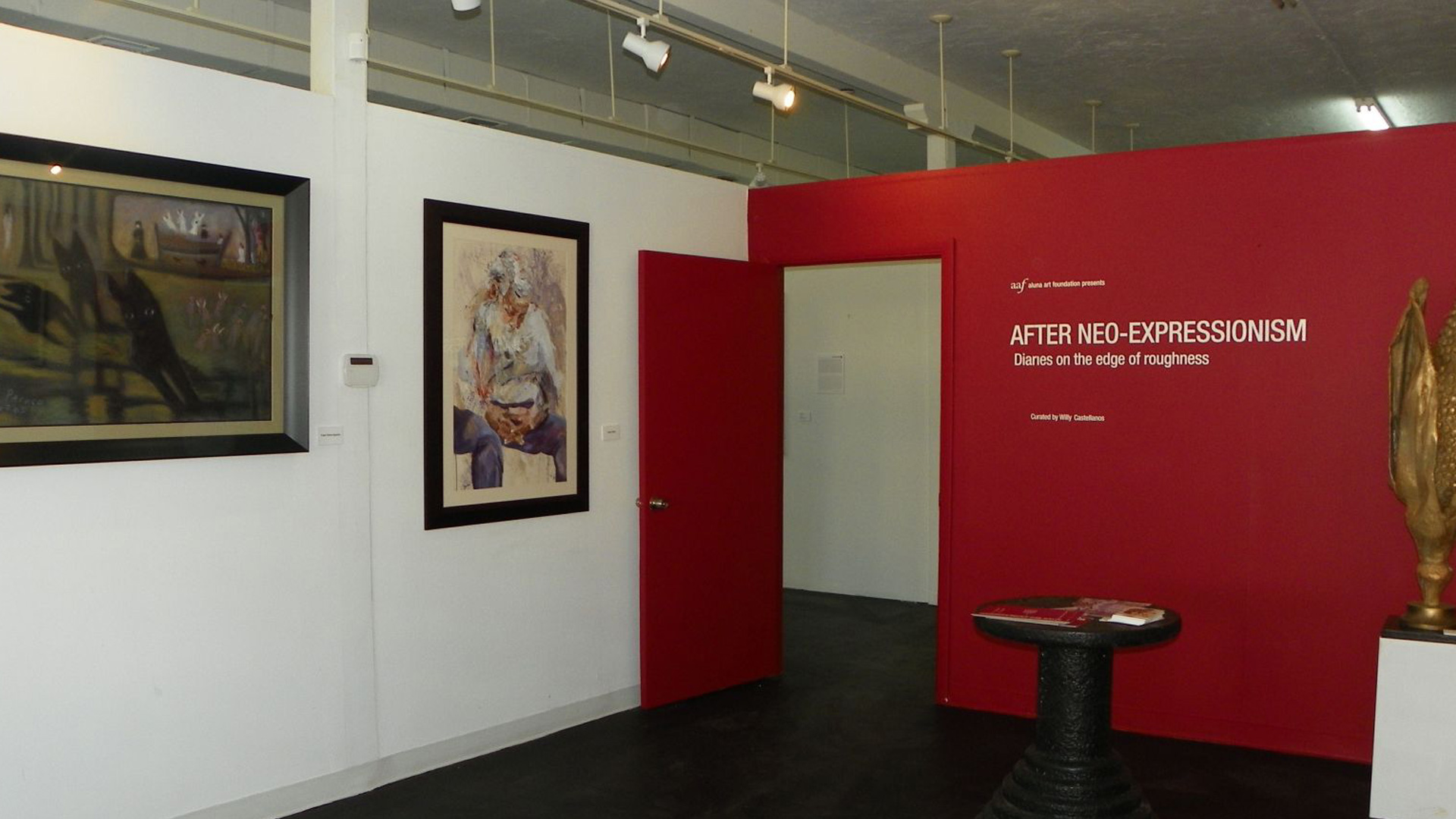 This past year, the Miami-based Aluna Art Foundation was established by art historian and curator Guillermo “Willy” Castellanos and critic and curator Adriana Herrera, with the goal of raising the visibility for artists outside the mainstream. The Foundation’s first exhibition, After Neo-Expressionism: Diaries on the Edge of Roughness, is just completing its run at the Barrio Workshop Artspace in Miami, where it closes on Saturday, January 14. In an email interview with Cuban Art News, Herrera reflects on Aluna Art’s first months and its plans for the future.

Tell us about Aluna Art Foundation.

Aluna Art Foundation was founded in 2011 by Willy Castellanos and myself. Willy is an art historian, photographer and curator who graduated from the University of Havana and did pioneering research on the nude in Cuban photography in the late 1980s to mid-1990s. I’m a doctoral candidate finishing a thesis on the relation between art and literature, and an editor, art critic, contributor to specialized media, and curator.

The name of the Foundation comes from a word used by the indigenous Kogui people, which means the state in which things with great potential exist but are not yet fully manifested. Aluna Art Foundation was created to give visibility to artists whose practices are not well recognized or represented, as a means of broadening the thinking about contemporary art.

This implies a dialogue with the local context, which includes the possibility of exhibitions with artists from other places. But it’s particularly about working with artists who are not integrated into the gallery system—not only young, emerging artists but artists of different generations whose work does not respond to the implicit demands of the market.

The Foundation’s exhibitions are accompanied by discussions, connecting artists who may not know each other but whose work explores common themes. Discovering these connections together—beyond the demands of the hegemonic centers—can build vision. Ultimately, at a time when there are no real movements and artistic vision is guided by commercial entities such as galleries and fairs, exploring what exists on the margins allows us to reflect on where we’re going, and what the obsessions and needs are that are so often portrayed in art, whether or not it’s sold. In short, the Foundation’s focus is on creating alternative exhibitions and generating thought and discussion about them.

How do Cuban artists fit into this vision?

A curator in Los Angeles said in a private conversation that Miami was the “kiss of death” for Cuban artists. In the eyes of the world, the stereotype is that living abroad seems to extinguish the creative potential of Cuban artists. Far from it. There is a group of artists in Miami, living in harsh conditions, who are disadvantaged by a market that is dazzled by the exoticism associated with the island and an imaginary that extends from the noble savage to the good revolutionary. These artists continue to develop strategies of critical art that are almost unknown outside Miami. The imagery surrounding Miami is disadvantageous for artists living here who lost contact with the island. The great paradox is that they still create in these difficult conditions.

In that sense, one of the Aluna projects is to continue the exhibition, Critical Strategies of Post-Utopian Cuban Art, which I recently curated at the Houston Art Fair. This exhibition demonstrated the continuity of political vision in artists of the 1980s Generation, which has been able to deconstruct the codes of both communism and rampant capitalism. It’s also interesting how the generation that might be called the Children of the Special Period transplanted objectual strategies—inspired by popular aesthetics and by the resources to survive—from Havana to Miami, and pointed up the cracks in both systems with a kind of art that is as political as it is playful.

In general, Miami’s Cuban artists represent a majority in the wide artistic diaspora of this city of immigrants, and in that sense there will be many projects to involve them.

After Neo-Expressionism is the Foundation’s first exhibition, right?

Before establishing the Foundation, Willy and I collaborated in various ways on other exhibitions, such as the one I just mentioned, Critical Strategies of Post-Utopian Cuban Art, as well as Prayers for Saints and Orishas, which presented the work of three Cuban photographers depicting different religious cults and iconography on the island. And Willy has curated shows for the Miami Dade College Art Gallery System, including one on Mexico-based Cuban graphic designer Félix Béltran and another on Cuban artist José Franco, who lived in Argentina for many years.

But certainly, After Neo-Expressionism is the first exhibition organized by Aluna Art Foundation.

Are publications part of the plan?

It’s interesting to consider that the exhibitions that are given broad media coverage are not usually the ones done in alternative spaces, and there is little or no information about artists who are not exhibited in traditional venues. There is for example, little or no coverage of studio tours in magazines and newspapers.

One of Aluna Art Foundation’s goals is to reflect on the direction and role of art not regulated by the choices of galleries. Each of our exhibitions will have a catalogue, and we aim to develop editorial projects in conjunction with institutions. Although there are noteworthy publications devoted to individual artists, Miami does not have an in-depth book that represents the work of its most important artists. A collection of essays that deepen the work of each artist is one of our goals. The Foundation’s website should be online in March.

What else is the Foundation planning?

Talks are essential. There are usually no dialogues at exhibition spaces, and even less so in group exhibitions. Hearing about the artists’ experiences and talking not only with a group of critics but with the public is as important as it is unusual. Exhibition openings are usually opportunities for social recreation, not for reflection. With After Neo-Expressionism, for example, there was a well-attended panel discussion, which explored the relationship between expressionism and Miami. Similarly, in late December, there was a poetry section, since we are interested in the relationships between the arts and how their languages intersect. We also want to extend the potential of art to generate interactions and debates—its potential to build communities.

How did the exhibition develop? How did Willy Castellanos select the artists?

One of the artists chosen, Frank Chinea, invited Willy to see his work and wondered whether he thought it would be possible to find other artists whose visual language was similar. We had already established Aluna Art Foundation. As we began to visit artists in their studios, we started to realize that, three decades after the rise of neo-expressionism, there was still a considerable group of Cuban artists, all about 60 years of age, who weren’t represented by galleries but who have continued to explore an artistic language that is visceral and non-conceptual, and that is alien to the reinvestment in the languages of modernity or even to far-reaching perspectives on the possibilities of art. And yet they share what they call a Dionysian impulse, a search for vitality through the artworks that contain their biographies.

The exhibition subtitle, Diaries on the Edge of Roughness, refers to the fact that from the artists’ standpoint, these works are “diaries” about the intimate universe, or about the broader social context. In both cases the works deal with what, in some ways, are the toughest things: the fear, the phantasms, the depiction of marginal spaces.

How do the artists’ work fit together in the show? What makes them suitable to be shown together?

There is a particular mode of transgression, based on the fact that the artists include narratives connected to their lives and the context they’re lived in. Even in terms of visual language, they use a mode of expression that’s not in line with contemporary practices; yet they continue to exist.
Yovani Bauta has made portraits based on photographs and his expressionist interpretation of them, in a series called Los olvidados—The Forgotten Ones. It focuses on the overlooked people of Miami: artists, prostitutes, elderly, the homeless, people wandering without cars in a city where everything revolves around them.

Ramón Lago´s sculptures challenge the parameters of a capitalist hedonism that relies on what you might call the eternal gods, youth and beauty. The series 50/50 features realistic sculptures of fifty men over fifty years old, naked, depicted in everyday activities: sleeping soundly, talking on the phone, but also posing defiantly. All have in common an affirmation of the vitality of older men, and the beauty of bodies that offer a different definition of perfection. We are not against the expressionist distortion of the body, but against the distortion of the stereotyped parameters of beauty. Lago has also done a fantastic series of erotic fruit that incorporates representations of the human body.

Carlos A. Diaz Barrios, a famous poet and the editor of a beautiful series of books, began painting when he reached the limits of his own words. In a piece that can be traced back to Bosch or Goya, and somehow to Antonia Eiríz, he worked on corrugated cardboard using axes or spatulas instead of brushes, depicting creatures that wander into the unconscious, connected to the shadow-zone explored by Jung.

In Dopico-Lerner—a watercolorist and painter known for using the typical tropical colors of the Cuban modernist painting—we find two very interesting series painted ocher and gray and even completely in black, reflecting what might be called inner cities. In Frank Chinea, a self-taught artist, there is a return to a kind of painting—recalling Chagall—that incorporates the narratives of his life, but spontaneously develops an interesting iconography, with small figures in the shadows, sometimes upside down, or creatures leaning out of windows. Even though painted with quick strokes, they communicate complex inner worlds. The instinctual, the emotional, the biographical—all those elements exorcised from conceptual art—are present in these works, which tell us that there continue to be connections, illogical and not mediated through the use of appropriations, between life and art.

The contiued effort to make visible, increasingly visible, those artworks that are still too little known. At the FotoAméricas fair we will open an exhibition titled Exodus, an unpublished photographic essay about the 1994 exodus from Havana, in which thousands of people openly made rafts in order to leave the island. Willy Castellanos didn’t depict the usual images of balseros at sea, but the step-by-step construction of the rafts in public spaces, their transportation to the water by car, motor scooters, bicycles, on foot—in short, an epic of huge crowds waiting for the rafters’ departure. This essay will also be published in book form.

Also in process is an exhibition titled Oikos: Memories of the Displaced House, featuring the work of Miami-based artists and photographers from various diasporas who have taken images of migration and poured them into the iconography of the house. With the 400th anniversary of the appearance of the Virgen de la Caridad del Cobre, we’re selecting a group of artists for an exhibition that explores this Cuban national icon in a range of media and contemporary visual languages. And we’re working with Hardcore Contemporary Art Space in Wynwood to prepare an exhibition of work by Carlos Gámez de Francisco, a young Cuban artist living in Louisville, Kentucky, which will open in June.