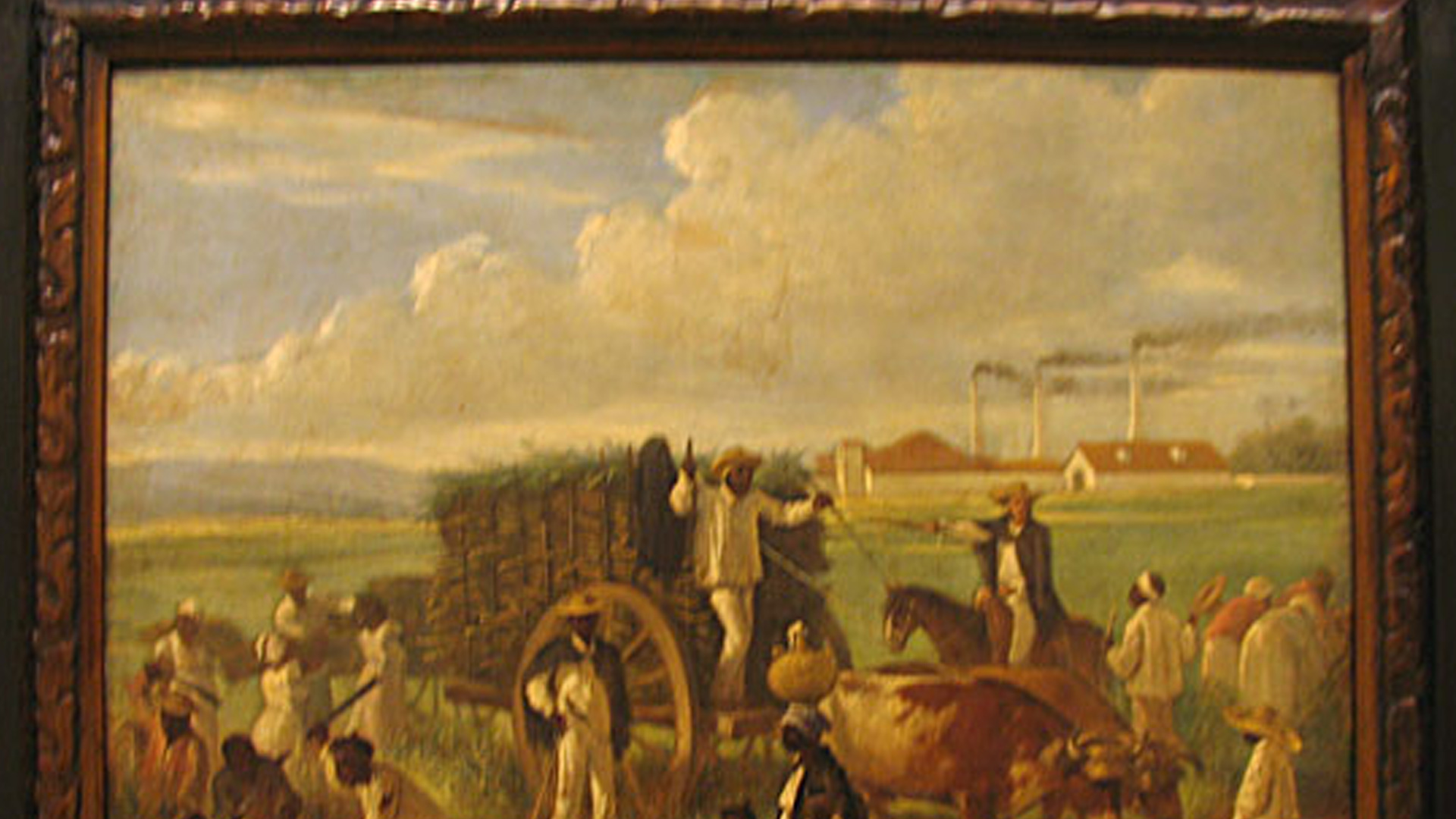 The birth of the Republic of Cuba in 1902 saw a new kind of collector emerge on the island, one who favored international art as an expression of social prestige. To acquire foreign art undoubtedly required great wealth. But alongside impressive international collections such as that of the Condesa de Revilla Camargo or Julio Lobo Olavarría, another collecting approach emerged. These “new” collectors were Cuban professionals—lawyers, architects, physicians—with fewer resources at their disposal. But in the development of a national culture, they became the real patrons of Cuban visual arts.

Arguably the most important collector of colonial-era art in Cuba was Evelio Govantes Fuertes (Havana 1886-Florida, United States 1981). Govantes is best known as an essential figure in the development of Cuban architecture in the period from 1902 to 1933. A 1907 graduate in civil engineering and architecture at the University of Havana, he served as director of municipal public works from 1913 to 1925 and was later appointed head of municipal development in Havana.

In the department of public works, Govantes spearheaded a plan that ultimately had tremendous impact: for the first time, public buildings erected during the era of Spanish domination—El Templete, the Segundo Cabo Palace, and the Palace of the Captains General—were restored. Carried out in collaboration with his colleague Félix Cabarrocas, the restorations gave these buildings their current appearance. Plaster was removed from the façades, and the shell-studded rock and masonry of colonial architecture were exposed.

Under Govantes’s initiative, the Plaza de Armas and Havana Cathedral were declared National Heritage landmarks, unsightly power lines in the historic district were replaced by underground cables (still functioning), and the original street names in Old Havana, which had survived in the memories and daily usage of Habañeros, were restored. In 1929, the Cuban Pavilion at the international exposition in Seville, Spain—designed by Govantes and Cabarrocas—was awarded the Grand Prix.

The Birth of a Collection

As acclaimed as Govantes has been as an architect, Govantes the collector remains a relatively unknown figure in Cuban art history. It is difficult to pinpoint the start of his interest, but by 1922 he was completely focused on colonial art. This is reflected in his essay “Vicente Escobar, Pioneer of Painting in Cuba,” from that year. The study of this native artist was of paramount importance for the history of Cuban art, placing the development of the arts on the island in an historical context—including the early carvings, wall murals, and decorations that embellished colonial homes and public buildings.

The research behind this study remains impressive in its scope, citations, and masterful assembly of information. According to Antonio Rodríguez Morey, director of the Museo Nacional until 1967, Govantes lectured on Escobar at the Municipal Palace in 1936, during a celebration of Havana history and illustrious Habañeros. His research on Escobar was exhaustive; little is known about this portraitist of the Cuban aristocracy that was not included in Govantes’s research. This text also served as an essential foundation for later studies on the early history of Cuban art by Guy Pérez Cisneros and Jorge Rigol.

By the late 1930s, Govantes’s collection already had numerous exponents. This was a time of success and prosperity for the architect, who, with his partner Cabarrocas, built the national capitol, among other projects.

Every collector leaves his imprint on his collection, reflecting his own personality and understanding. In this regard, Govantes’s collection bears the unmistakable mark of a previous historical era. Govantes’s collection was first shown to the public in 1933. Under his own initiative, he organized Retrospective Exhibtions of Cuban Art: Part One, Guillermo Collazo, Painter and Sculptor, presented at the Havana Lyceum. This project rescued from obscurity an artist of the colonial era who had been nearly forgotten. With some of his own pieces and others lent by various Cuban families, Govantes’s exhibition incorporated the most complete research on Collazo. El Diario de la Marina echoed the praise of Luis de Soto, who wrote: “Our collector … once again demonstrated his unalloyed devotion to our national art, and his tenacious and productive work to proclaim its genuine worth.”

The Collazo exhibition was the first in a series of shows that Govantes had planned for the Lyceum. Few were actually presented, but the list of proposed artists gives a good indication of his interests: Metcalf, Chartrand, Porro, Peñuelas, Arias, José Arburúa, Colson, Peoli, Cleenewerck, Landaluze, Alejandro Odero, and Valentín Sanz Carta. Much of what is considered ‘Cuban’ in the visual arts today emerged from this approach to colonial-era art. Beyond an artist’s birthplace or the academy in which he or she trained, ‘Cuban’ art is identified with such iconic touchstones as the depiction of the island’s landscape, portraits of historical figures who advanced the nation’s welfare, or with the influence exerted on the artist by the Academia de Pintura (Academy of Painting).

Govantes owned a single work by the artist Rita Matilde Peñuela: Gatos or Un gato y dos gatitos juegan en un cojín (“Cats” or “A Cat and Two Kittens Playing on a Cushion”). It came from the Ximeno Gallery, founded in Matanzas in the 19th century and unfortunately later closed. At this time, no other female artists were being collected. Ximeno had insisted on bringing Peñuela’s work from Paris; she is widely considered the first female Cuban artist to have achieved national distinction.

Several works from the Ximeno Gallery came into Govantes’s collection, reflecting a trend in the 1930s and 1940s in which works were valued not only for their antiquity but for their provenance. By that point many colonial collections had left Cuba due to their low auction value on the island, but during this period colonial works found a domestic market, which saved many such collections from going abroad.

Govantes lent works from his collection to other exhibition projects. For the exhibition 300 Years of Art in Cuba (Havana University, 1940), organized and sponsored the National Institute of Visual Arts and the National Corporation for Tourism, Govantes lent 16 of the show’s 322 pieces, including five watercolors by the Basque-born painter and cartoonist Victor Patricio Landaluze.

A Collector at Home

The architectural firm of Govantes and Cabarrocas was housed in a succession of locations: first on Colón between Prado and Morro, then in the Vedado district at 505 A Street and 451 11th Street. The firm’s projects became landmarks of the architectural movement in Cuba, among them the Baró-Lasa residence, Dulce Dimora (originally owned by Orestes Ferrara, since 1962 home of the Napoleonic Museum), and Xanadu, built in Varadero for millionaire Ireneé Dupont.

Govantes’s own homes were designed and decorated along traditional and historical lines, within an eclectic style. During the years he formed his collection, the architect resided in the Miramar district, at 7th and 34th. Paradoxically, the building he resided in has not survived. Its rooms were decorated with colonial furniture: a Louis XV-style colonial living room set with grille and medallion, Baroque-style sacristy bureaux with silver handles and keyholes, mirrors with carved frames that came from an old mansion in Guanabacoa, and pieces from the Condes de Fernandina´s collection. Artworks and decorative objects were arranged and displayed on these furnishings, completing the scenario and echoing the splendors of great 19th-century halls.

The walls were decorated with selected colonial paintings. Over comfortable furniture hung watercolors by Landaluze; in a corner, above an easy chair or rocker for reading or resting, would be a landscape by Chartrand or Sanz Carta, in which it is almost possible to hear the river rippling or the creak of the plough. The ambience—more romantic for its suggestion of a bygone time than for the style of the pieces themselves—has much to say about Govantes’s taste for the past, embodied in every artwork and object he collected.

A representative list of artists completed Govantes´s collection, including three landscapes by Esteban Chartrand, two by Valentín Sanz Carta and a cityscape by Cleenewerck. Outstanding students of the San Alejandro Academy at the end of the 19th century are also represented: A self-portrait by Miguel Angel Melero showing the young artist in his study, a landscape by Reinoso Emilio Puentes Grandes, and four pieces of great value by Arburu Morell: Dolorosa, Cabeza de estudio, Los Mendigos romanos and Una Academia, a study of a female nude. Late in life, Govantes donated this last work to the Museo Nacional de Bellas Artes. Exceptions within the collection is La Cabaña by Federico Edelman and Una Cabeza de Viejo by Romañach, which confirm the importance of those artists dedicated to teaching Cuban art.