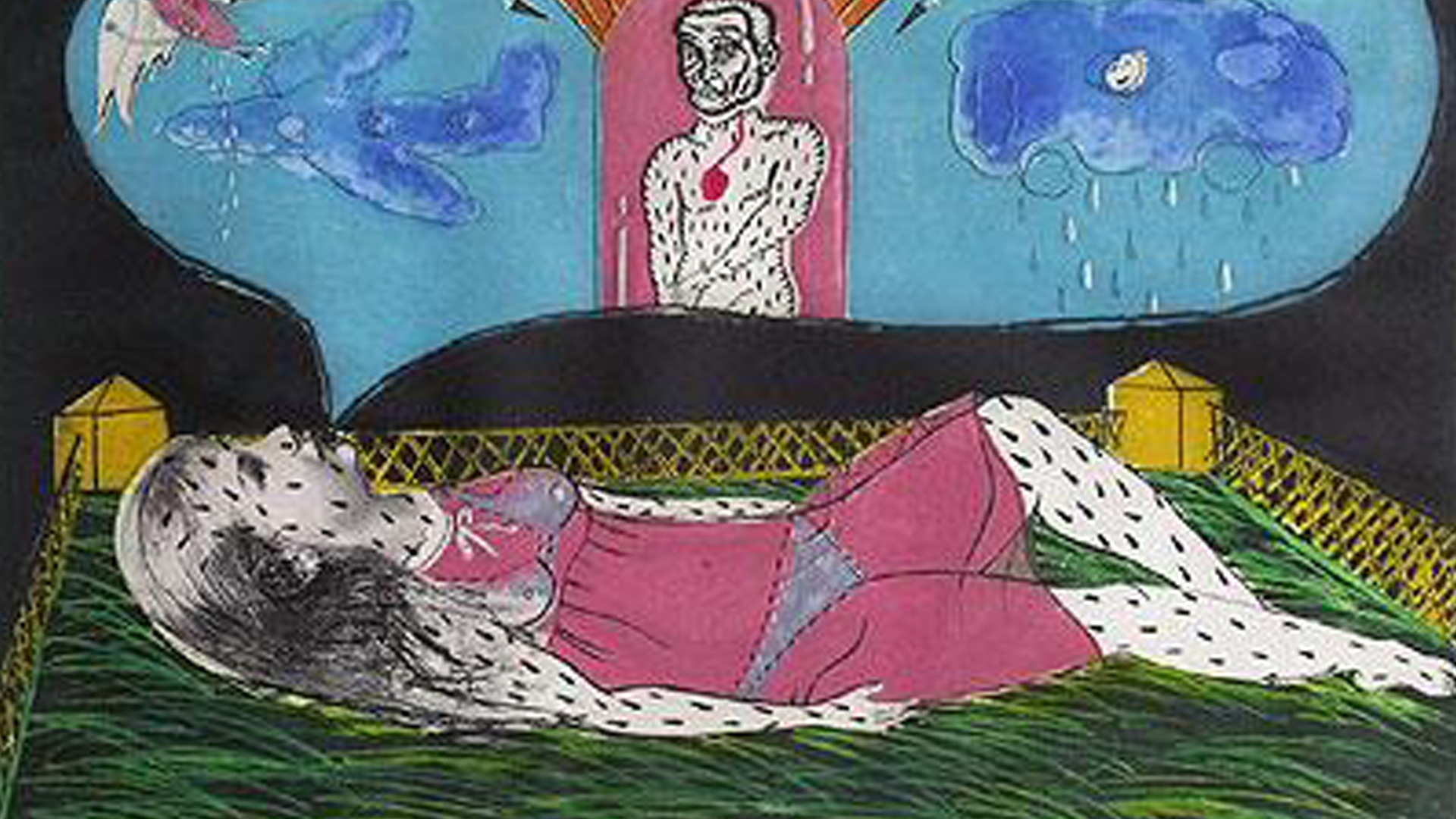 On view through July 23, Uprooted/Transmigrations features the work of a dozen Cuban and Latin American artists. Cuban Art News talks with Abelardo Mena of the Museo Nacional de Bellas Artes in Havana about his first exhibition in Miami.

Where did the idea for the exhibition come from?

A year ago, I met in Havana with Robert Borlenghi and Janda Wetherington, director and president of Pan American Art Projects, a gallery in Wynwood, the Art District of Miami. They were interested in doing a group show based on their superb Latin American art collection. They wanted it to have a strong curatorial concept, despite being displayed in a commercial gallery. After that, endless email messages went from one side of the Florida Straits to the other, several times a day. For a museum curator, working with such a collection without any commercial pressure was an stimulating challenge.

What’s the conceptual core of Uprooted/Transmigrations?

The exhibition aims to explore, without melodrama, a persistent theme in Latin American art of the past decades: travel abroad (whether voluntary or forced), migratory movements, and the role of diasporas in reconstituting nations across borders. As usual, Latin American contemporary art is attuned to the most current themes, digging into their contexts and local histories.

There is a tendency to characterize this phenomenon as a byproduct of recent globalization. But even a cursory review of Caribbean and Latin America history shows that the construction of Latin American nation-states, newly freed from colonial rule (with Cuba as an example in 1899), sparked considerable migratory flows. Thousands of workers from Europe and Asia were “imported” to the continent as a cheap and presumably civilized labor force, as compared to the “barbarity” of native populations. We can recall, for instance, Sarmiento in Argentina, a key political figure in the movement for “white” immigration as a source of progress for rural and backward Argentina. And in Cuba in 1902, immigrants from impoverished Spain outnumbered those already settled on the island.

In the most recent issue of New Times magazine, critic Carlos Suarez de Jesus wrote that “Pan American Art Projects’ new exhibit isn’t your typical summer group show,” calling it “a museum-quality show featuring top-drawer talent.” For a museum curator like yourself, what were the challenges involved in curating for a commercial space?

Working at Cuba’s Museo Nacional de Bellas Artes for nearly two decades has left its mark on me as a museum professional. For a collections curator, the collection itself—how it was formed, its evolution over time, the various artistic directions that nurtured it, even the political events which stimulated and/or changed it—is a living thing, and a rich source of art-historical information.

Pan American gave me unlimited access to their holdings—they have recorded much of the history of the Cuban and Latin American art of the last twenty years. Thanks to this generous privilege, I was able to choose important works and artists without commercial pressure. I think good art always sells, but gallery owners sometimes don’t understand this. With Janda and Borlenghi, though, the language was fluid: they’re on the side of the art. And I can’t overlook the wonderful help of Irina Leyva and Fernanda Torcida. Working with them in such a familiar environment was another privilege.

Which nationalities and artists did you select? What can you tell us about the works?

Most of the artists I chose were from Cuba, Argentina and Jamaica. The works were paintings, sculpture, drawings, photographs, and installations. I used the entire space of the gallery—a renovated former warehouse—and that allowed me to create interesting relationships in the groups of works.

The list of artists was luxurious: Luis Cruz Azaceta, Tania Bruguera, Abel Barroso and Sandra Ramos (who all participated in the installation and the opening), as well as Carlos Estévez, Argentinians Yaya Firpo and Graciela Sacco, David Boxer and Milton George from Jamaica, and Édouard Duval Carrié—whom I met—from Haiti.

It was important to show the range of approaches taken by the artists: paintings, readymades, appropriations. For example, Yaya Firpo from Argentina uses a kind of reverse mapping—meticulously disrupted maps of the world. Every developed nation-state has now been occupied by immigrants from developing nations, and the maps attest to this re-conquest.

Uprooted includes two artists from Jamaica, who have become important figures in visual arts on the island. Milton George uses an expressionist style to reflect his vision of the island landscape; David Boxer, acclaimed for “deconstructive” mixed-media works and collages, digs into post-colonial discourse to de-solemnize the representation of indigenous cultures. A tree full of votive offerings, created by Duval-Carrié, a very important Haitian artist, extended the presence of the Lesser Antilles in the exhibition.

There’s a lot of sculpture in the show. How does it figure in the curatorial concept?

Sculpture was an essential part of my thinking. I was particularly interested in the smooth integration of two-dimensional and three-dimensional works. Yaya Firpo’s work (in particular, the mapped skull), works by Argentinian Hernán Dompé, the object trouvé accumulations of Carlos Gallardo, the delicately printed shoes and bag by Graciela Sacco, the rubber balsera by the Cuban artist Kcho—known for his pioneering approach to Cuban migration in the 1990s—as well as Statistics, the huge Cuban flag made with human hair by performance artist Tania Bruguera, and the city of Havana sculpturally condensed onto a flip-flop by Los Carpinteros, and the playful installation Dual Citizenship by Abel Barroso all attest to the flourishing of three-dimensional art in Latin America and the Caribbean, well beyond the usual practices of modernism.

Cuban artists of various genres and styles stand out in the exhibition.

The ‘Cuban team’ chosen for Uprooted demonstrates the current importance of painting as an expressive tool. Luis Cruz Azaceta is the Rimbaud of Cuban painting. Instead of sclerotic depictions of Cuban fruits or colonial architecture—useless gestures in the face of the great “heavyweight” Amelia Peláez—Azaceta´s images are projected from the corners of an intimate biography to become metaphors of the human condition. His canvases are graphic diaries of the humiliated, of those who have lost all, or almost all, in the process of emigration.

Humberto Castro—best known for his re-envisioning of the myth of Icarus—is followed by another artist-in-transit searching for new paths: the magnificent metaphor of a boat as the symbol of the artist, sailing in troubled waters in search of the saving light. Carlos Estévez, who made a successful leap over the Florida Straits, introduced the silhouette of Cuba for the first time, along with the machine-beings that have populated his work. Sandra Ramos etched a manga a lo cubano—a Cuban-style sleeve—in which she depicts herself embracing José Marti, icon of all Cubans, transforming a sense of abandonment into art, a process completed under the heavy drum of the printing press.

The exhibition has been written up in publications such as New Times and by critic Joaquín Badajoz in ArtPulse. And it was widely visited during the ArtWalks held in the Art District.

Uprooted/Transmigrations shows the importance of promoting Latin American art collections outside the “natural” borders of the continent. That so many people visited the exhibition during ArtWalk not only allowed me to rediscover important aspects of communicating with the public, but to note as well how similar the public is in different countries.

This was your first visit to Miami and the U.S. What were your impressions?

From a professional standpoint, I was pleased to do a project in which there was such strong communication. From a personal perspective, it allowed me to rediscover old friends, many Cuban artists of the 1980s whom I admired and from whom I learned a lot, as well as my family. Who could ask for more?