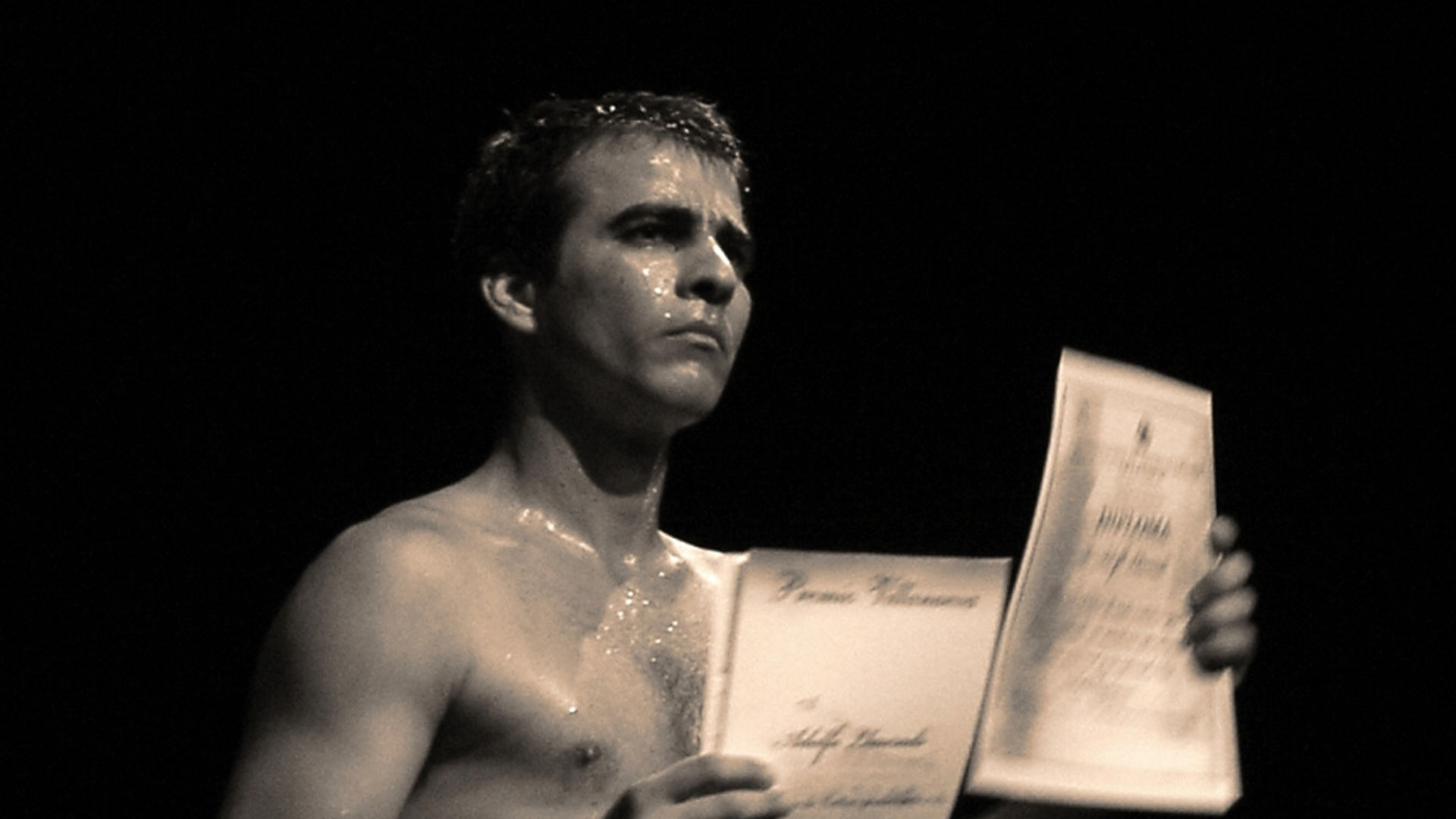 Norge Espinosa: I’ve been lucky enough to observe Léster’s growth as an actor since 1999 when he graduated from the National Art School (ENA), at the same venue—the Trianon Theater—where he is still working today. In these twelve years he has performed in shows directed by Carlos Díaz for Teatro El Público, and in La Celestina, The Crucible, Maria Antonieta o la maldita circunstancia del agua por todas partes (Marie Antoinette or the bloody circumstance of water everywhere), Icarus, and many others. Having earned many prizes and gained years of experience, Léster Martínez is still one of the Cuban actors committed to the theater, despite its economic hardships and the temptations of television and movies. Here is a dialogue we had about his strange loyalty to theater.

In reviewing your career, which has been amazingly active in only twelve years, I’ve noted that since your school days you seemed destined to be part of Teatro El Público. How much has fate or your own desires tied you to this group?

Ever since I was in the ENA (National School of Art), I wanted to work with Carlos Díaz. He was a director I was interested in and I always wanted to test my skills in his productions. When I was in my third year, I was preparing a theoretical work on Shakespeare’s King Lear. Fortunately, Carlos was mounting that production, and I went to almost every rehearsal. One day he asked me if I dared to play one of the characters, the Duke of Burgundy—and I said yes. He gave me the opportunity and opened doors for me that enable me to stay in this company, or better, as he says, in the Teatro El Público troop.

Critics have praised your physical abilities. You appeared in an unusual show, conceived and directed by Carlos Díaz: Marie Antoinette or the bloody circumstance of water everywhere. Featuring Cuban music, it portrayed without words—other than the poems of Virgilio Piñera—the story of a Cuban family. What did working without words and being in touch with professional dancers mean for you in that first moment of your life as an actor?

I’ve always liked dancing. In the ENA, if I had any free time, I attended modern dance and folk dance classes. I’ve always dreamt of dancing; I even like to dream that I am a great dancer—at least in my dreams. It’s something I can do, and whenever I’m on stage I show it. I have not neglected this skill, because I believe that a contemporary actor must have a trained body and be versatile, must know how to sing, dance, etc. I also dream of performing in a musical show some day and really doing it. Working in Marie Antoinette …, with dancers as respected as Sandra Ramy and Xenia Cruz was a real challenge, because they managed all those codes very well. I took the opportunity to learn from them all that I could, and they helped me believe I was a real dancer.

After that show, many others came along, all of them very different. However, ten years after your debut, you had the possibility to pay homage to Adolfo Llauradó in ¡Ay, mi amor! (Oh, My Love!), a show that definitively marks a before and after in your professional life. Adolfo Llauradó (1940-2001) is an essential name in theater, film, and a half-century of Cuban television: the actor appeared in such classics of Cuban cinema as Lucia and Portrait of Teresa (Retrato de Teresa). How were you able to connect with the experiences of such a dominant actor, who witnessed and recorded times and events in the Cuban theater and in the entire country which you can’t know?

It was a challenge. Setting up a one-man show in just two months, with all that history that I didn’t live through, and with the additional demands of the speedy production schedule, was a challenge that really made me wonder if I was ready for new experiences in my career.

But I think that in life one must always be ready to experience new things. And Carlos Díaz, along with Jacqueline Meppiel, Adolfo´s widow, and all the people participating in the production gave me this chance. I remember Jacqueline called me at home and asked me: “But you’re going to be Adolfo?” And I said, yes, I would try: I entered into the process with humility. I knew that many people might ask: what does this guy have to do with Adolfo, and with that story? I was lucky in that many people who knew Adolfo very well helped me a lot; actresses like Alina Rodriguez, Paula Ali, Monica Guffanti, Adria Santana shared with me many beautiful stories and memories. This helped me in my professional life. I also recognized that a monologue requires great strength, dedication, and many resources. It was a great test. I did my best and I said, either I do it right or I perish. I was on edge the entire time and I think that was what later turned into thanks and applause.

After ¡Ay, mi amor! (Oh, My Love!), after more than a hundred performances and your awards, Carlos Díaz offered you the chance to play a completely different character: the role of Karin Thimm in Fassbinder’s The Bitter Tears of Petra von Kant. How could you jump out of Adolfo Llauradó into a female role, and what did working hand-in-hand with such a notable and rigorous actor as Fernando Hechavarría mean for you?

Fassbinder’s work is full of subtleties and Carlos filled it with such energy, mixing male and female traits in a very provocative way. It was another challenge, and that’s what I like: to work hard. I had to give my professional life a big turn, because I was trying to interpret and understand a woman like Karin, and at the same time I also tried not to hide that the interpreter was a man. We had to play with both sides of the coin. I was not a transvestite, nor an actor playing a female role, but it was more a matter of essences.

With Fernando, an actor whom I respect a lot, we achieved the necessary empathy and every performance allowed me to know more about him. I listened to him to find ways to answer and confront him. Of course, this character [Karin] has a concrete sense of real life, and so I found a way of understanding her: even when she seems common, ordinary, and sordid, Karin is sincere, honest even when she says the most horrible things. And that sincerity allowed me to recreate her.

You have done many works on stage with other directors, and have had a few forays into film and television. But you always come back to the theater. Do you think it will remain so, that despite the time and all the hardships and temptations, you’ll always return to the Trianon Theater?

I’ve been at this for twelve years now and I think that an actor must have experience in various fields, because that’s how we learn and gain further knowledge. I’m still waiting for a good movie role. I have appeared on TV in dramas, police stories, and soap operas. But I always come back to the theater. I like the way my director works, knowing that he trusts me and challenges me.

Now there is a new generation in the Trianon Theater, coming from the ENA, like me. And last year, I did another Shakespeare, A Midsummer Night’s Dream, with them. For me, being with these young people (I’m still young, I don’t believe I am old) is very exciting. Carlos Díaz is an excellent person who always thinks big, imagines interesting shows, and knows how to control the energies of many people. That always makes me want to work with him. So, I’m always near the Trianon, waiting for my call.

Yes, with humility. But always coming back.