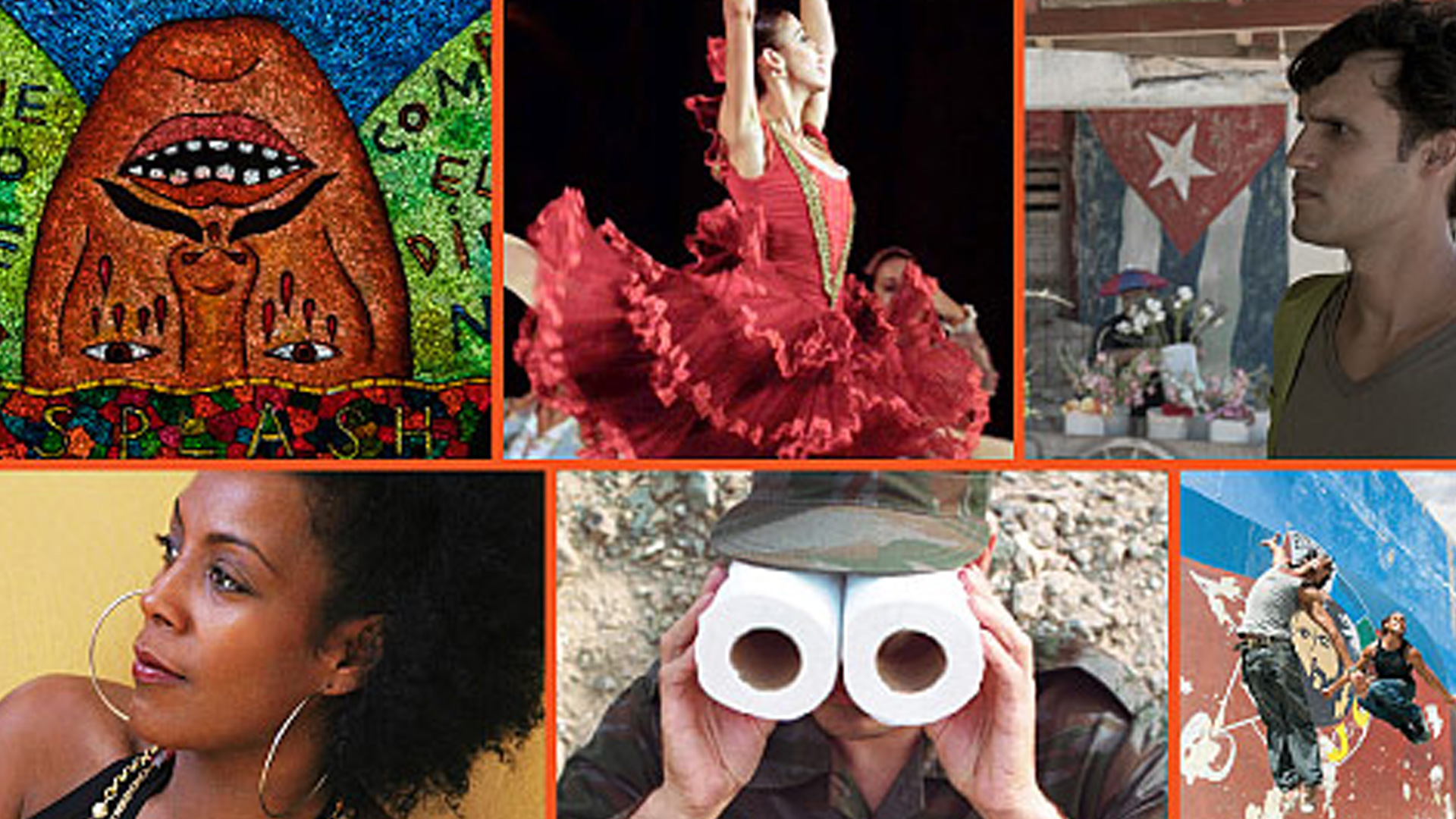 Ben Rodríguez-Cubeñas, chair of the Cuban Artists Fund and senior staff member at the Rockefeller Brothers Fund, is one of the principal organizers of ¡Sí Cuba!, the three-month festival of cultural events that kicks off at the end of this month. In a conversation with Cuban Art News, Rodríguez-Cubeñas talks about the festival, how it started, and the events he’s most looking forward to.

How did ¡Sí Cuba! come about? Where did the idea come from?

Karen Hopkins, the head of BAM [Brooklyn Academy of Music], came to me with the idea. Rockefeller Brothers Fund had funded something they did two years ago, called Muslim Voices, which was a big festival about Muslim cultures and communities. BAM was bringing the National Ballet of Cuba to perform this spring, and they were bringing Ballet Folklorico Cutumba. Since BAM is a major player in the arts world, Karen is well-positioned to see what’s coming up in New York. She thought, ‘This looks really good. We have the experience from Muslim Voices, let’s do Cuba right now.’ She came to the Rockefeller Brothers Fund for funding, and I said, ‘Oh, this is a great idea.’ We reached out to a couple of other funders and they came on board.

This was last October or so. Things came together very quickly.

And the BAM programs were more or less the nucleus of the festival?

Yes, the National Ballet and Cutumba. And then the Joyce Theater is the other piece. They were bringing Danza Contemporanea de Cuba, the contemporary dance company. So those three things were already moving. And then we found the Havana Film Festival New York, which is an ongoing annual event, and the Americas Society was already planning a whole program of Cuban visual artists and authors. So that came into the fold. And then everything started coming out of the woodwork. All this stuff was going on.

This sudden burst of cultural activity with Cuba—why now?

Well, Cuba had been closed up for such a long time, there was a lot of pent-up demand, both on the Cuban side from artists wanting to come here, and from groups that had long histories of doing programs with Cuba and had had to stop for a while. So there was a pent-up demand. And then things started moving during, I’d say, the six months after the Obama Administration came in. Now it’s about a year later, so this would be the time that a lot of the projects that have been in the planning stages are coming to fruition.

In putting together the overall program for ¡Sí Cuba!, was there a certain balance you were aiming for? Certain cultural fields you wanted to cover?

BAM was looking into this, and since I’m the co-chair of ¡Sí Cuba!, I did as well. Early on, for example, the visual arts weren’t as represented. So the Cuban Artists Fund [which Rodríguez-Cubeñas chairs] decided to do a photography exhibit [Body Memories, May 26-June 25]. Then we found out that Americas Society was doing the same thing [For Rent – Consuelo Castañeda]. So now it’s much more representative. But recently we just found out that the Bronx Museum has a show of Alexandre Arrechea going on at the same time, so—. We found out too late. But there is an opportunity for groups who were not included in the initial planning to partner with one of the ¡Sí Cuba! partners, so they can get their information out to the public via those portals.

Were there any kinds of events that you were not interested in including?

You will not find any political events there. That’s certainly been the modus operandi for the Cuban Artists Fund, and I think for many of the partners—to try to stay away from politics as much as possible.

Let’s focus for a moment on the Cuban visual art and artists. You say that you really wanted the visual arts to be part of ¡Sí Cuba! Why is that?

It was one of the pieces that was missing from the original partners. I mean, BAM is not a visual arts organization, it’s dance and music. The Joyce, the same thing. And I think that we’re at a time when there’s some really interesting things coming out of Cuba and Cuban artists.

Why is contemporary art in Cuba so interesting right now?

For me, it’s always been interesting. I’ve been collecting Cuban art for a very long time, so I’ve seen a lot of art. For a while, when it was difficult to get down there, I just went once a year, so I removed myself a bit from what was going on. Artists whom I had seen maybe five years ago, when they were just starting out—I’m seeing what they’re working on now and how much they’ve grown, how much deeper their work is. So that’s exciting for me, to see the growth of these artists under pretty tough circumstances and being somewhat isolated. When we [the U.S.] were closed, artists were able to go to Europe and Latin America, but it’s not like the United States—not like New York, and the kinds of resources we have here.

So for me to see that they were able to grow, to continue to expand, without having the benefit of coming here—I think that says a lot for the quality of what they’re doing and how they’re learning. That, for me, is what’s exciting.

What are your thoughts on collecting Cuban contemporary art—either private collectors or institutions? Is this an interesting time for that?

I think it’s one of the best times, I really do. I think what’s coming down the pipeline is really great. Some of the people who’ve been collecting contemporary Cuban art for a long time will say, ‘Well, we’ve heard that one before.’ [laughs] But I really do think that. Let’s talk again after this festival and you’ve seen what’s coming here. I think you’ll be pleasantly surprised.

What has the process been like in bringing the Cuban performers into the U.S.? Were there difficulties with those visas? Are you seeing changes in that area?

I went to Cuba in January and met with the National Ballet people, and the Danza Contemporanea folks. I am in touch with them on a regular basis, and there is a rhyme and reason and a timeline. And the timeline seems to be adhered to, both on the Cuban side and on the U.S. Interests Section side, in terms of how the visas are being processed. For instance, with the National Ballet, I think there are 75 people coming. From Danza Contemporanea, I think it’s between 25 and 35. Cutumba is probably another 25. Los Muñequitos de Matanzas could be maybe 15 people. So there are a couple hundred Cubans coming.

To process all this, to get the visas—you don’t just show up. It takes a couple of months, and you have to go through the Ministry of Culture, and through the U.S. Interests Section, and through the State Department, and then back to Cuba, and all that. So there’s a plan to process all these people, from both sides. And so far, that plan is being adhered to. Everything is up to date. Some of the artists are already going in for their interviews. So it looks okay.

When are the first artists scheduled to arrive in New York?

The contemporary dance company is going to be at the Joyce on May 9th. Their first performance is on May 10th, so they’ll be here a couple of days before. I think that’s the first group.

When it comes to international cultural events, New Yorkers are a pretty sophisticated audience. Of the many artists, performers, and events in ¡Sí Cuba!, which ones do you think will be real revelations?

[Pauses for thought] I think the Danza Contemporanea de Cuba will be wonderful, at the Joyce. It’s the first time that they’ve been here, and they’re just amazing. The quality and expertise of the dancers is just amazing. I think New York audiences will be blown away by that. The National Ballet is going to be very interesting. It’s probably going to be one of the last times that Alicia [Alonzo, the founder and director] comes with the company—she’s ninety-some-odd years old—so it’s probably going to be a rare opportunity to see Cuban ballet in its truest form. Cutumba’s going to be wonderful. You don’t really get to see that folkloric Cuban dance up here. But I would say, the contemporary dance is the one I’m looking forward to.

Fundación Cuba Avant-Garde, the sponsoring organization for Cuban Art News, is supporting the participation of Ballet Folklorico Cutumba. What can you tell us about them?

When people think of exchanges with Cuba, they think of Havana. And there’s a whole other island outside of Havana. Cutumba is from Santiago de Cuba. And for me, it’s really important that groups from Santiago de Cuba and other provinces come to New York. Absolutely critical and important. Obviously, these groups are a bit removed from the kinds of resources and visibility that some of the groups in Havana have, so it’s really important to support groups like them. And Cutumba is a very authentic Cuban folkloric dance company. It’s wonderful.

What would you like to see happen during ¡Sí Cuba!, and in the future?

I would like to see more opportunities for interaction when the Cuban artists are here, and when the representatives of the different Cuban organizations are here as well. That was something that’s come up in our planning meetings: how do we promote that?

I see this festival as one thing. My goal is to really continue to have ongoing interactions and partnerships and so forth. So I’m already looking at the fall. I’m thinking of bringing a theater company. Theater is a bit weak in this festival, and this didn’t work out in time, so we’re probably going to bring it in the fall, through a project with the Spanish Repertory Theatre. It’s Raúl Martín, who’s a playwright from Cuba.

I think you can’t just have one-shot kind of things. It’s got to be ongoing. Sooner or later, I hope that culture will prevail. And it already has, I think. It’s broken down some barriers, certainly. I think there’s a lot of interaction, certainly among the cultural community both here and in Cuba. And I hope that we can continue to do that even after this festival is over, because I think that’s really helpful, for everybody. It softens the hard edges. It just takes a really, really long time.