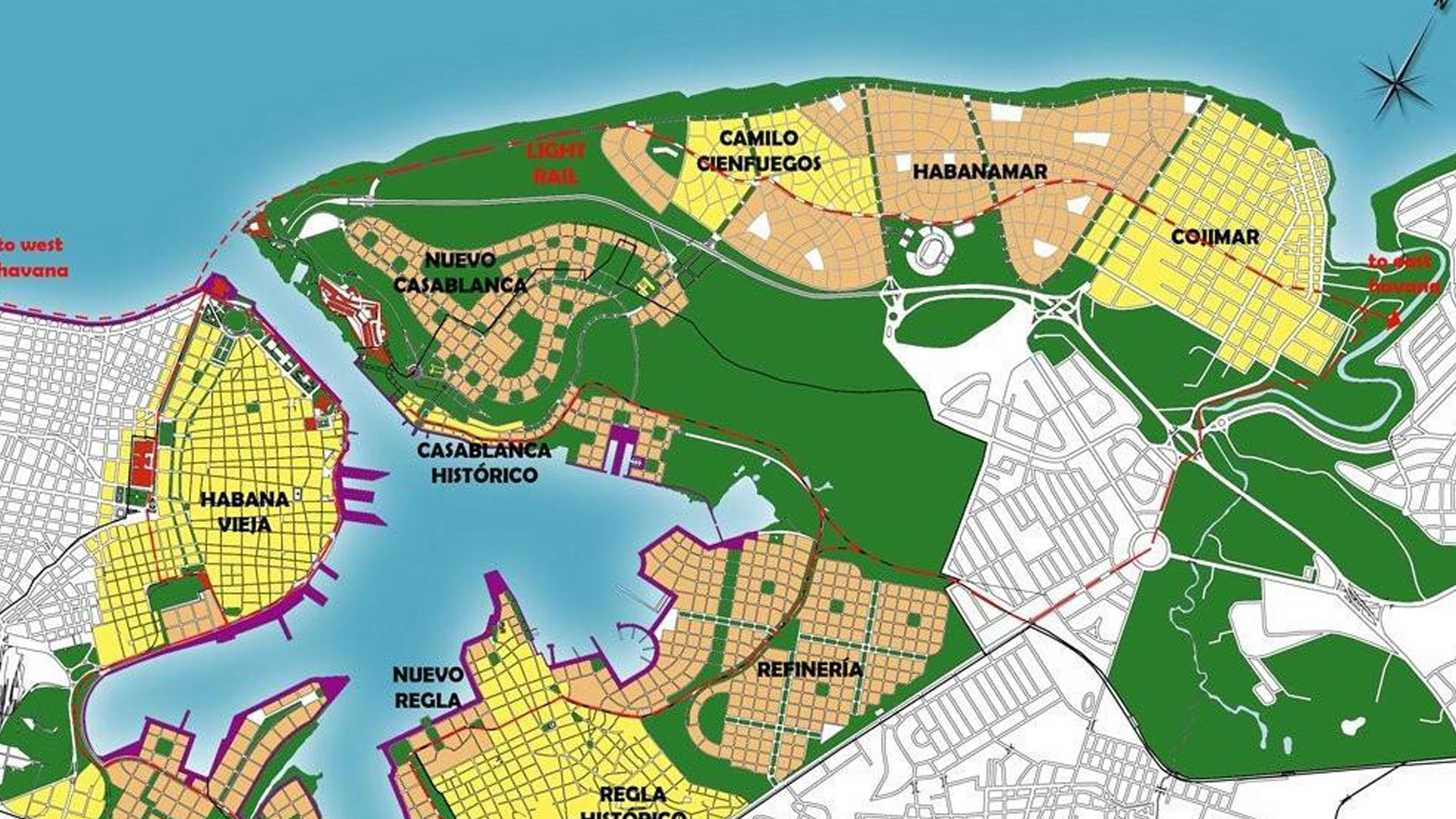 On December 16, Cuban architect and urban planner Julio César Pérez (b. San Antonio, 1957) opened an exhibition of architecture and planning at the Eduardo Abela Provincial Gallery in the town of San Antonio de los Baños. Pérez, who graduated from Havana’s School of Architecture in 1982, has taught and lectured at Harvard University, the Boston Architectural Center, and the University of Toronto. He is the author of Inside Cuba (Taschen, 2006), and The Island: Visions of Cuba (Editorial Samper, 2009).

In Part 1 of this two-part interview with Cuban Art News, Pérez discusses the highlights of his current exhibition, details of his ten-point approach to planning for Havana’s growth and development, and why all architects need to start out by designing houses.

Exhibitions on architecture and urbanism are not common in Cuba. What encouraged you to present a decade of projects?

I really don´t remember any collective exhibitions on architecture, except those done by the then-young college graduates of the 1980s—myself among them—in 1987 (at the Development Center for the Visual Arts, Plaza Vieja) and 1991 (at La Cabaña).

My last solo exhibition took place in 2002 at the School of Design at Harvard University. There, I presented a selection of 20 works and projects carried out between 1989 and 1999. Previously, with architects Milvia Céspedes and Esteban Martínez, I did an exhibition in San Antonio de los Baños during the 6th Havana Biennial in 1997. In all cases, the intention was to keep architecture alive as a calling, and to project a vision of this profession that continues the tradition and the savoir faire that has characterized its practice in our country during the past four centuries.

Now, this need motivated me again. It is also useful to analyze a period of work, to confront ideas and approaches, and above all, to show that architecture remains one of the fine arts, if it is approached with a rigorous artistic perspective.

Your exhibition covers a broad variety of topics: personal residences, cityscapes, the renovation of historic buildings, urban planning. Do they correspond to a wide range of interests in architecture?

For me, the practice of architecture begins with the relationship between the natural or cultural environment, which is an indivisible whole, and the human being. The city is the most important element, as it is an expression of human relationships and the essential cultural archetype. My interests are broad, and I renounce the reductionist vision and specialization that has done much harm to this profession everywhere. The architect must always be a Renaissance man who acts responsibly in his or her own time; he has to deal with both the eternal problems and the contemporary conflicts arising from his concrete circumstances. This requires constant study, above all for those devoted to teaching.

When approaching the house—a “traditional” theme and a laboratory for Cuban architects—you seem to have used construction techniques and skills already well-established in the popular repertoire.

The house is the point of departure, the subject closest to human beings, to architects. I believe that students should learn how to design a house before anything else. Many young architects do not know how, and that is lamentable; they don´t even have an accurate idea of what a home is, what their home is. It’s a good teaching exercise. The scale lets you start with a general idea and move on to details—to start from a specific situation in terms of location, spatial relations, functional requirements, program, context, purpose, and then arrive at the details.

It is a process that enables learning. It is imperative to design well, to build well—it is an ancient and still-valid lesson. Tradition provides the necessary instruction from which architects can explore and innovate, and find their own language beyond fashion and trends.

On the other hand, in Cuba there are not many options with respect to the use of non-traditional construction techniques and materials—most of all in housing. The total and repeated failure of prefabrication has been the most eloquent factor in favor of a return to traditional building techniques.

The loss of this work [designing houses] is, moreover, one of the factors that have affected the prestige of the profession. This is sad, as the construction industry in this country has been distinguished by a high level of skill, which reached its peak during the 1950s. I learned rigor, discipline, and craft by working with my father, an excellent bricklayer and master builder.

In your plan for Havana’s future growth and development, what do you see as the key elements?

The plan is based on a decalogue, a ten-point program that summarizes a set of interrelated, integral ideas. They must be considered together, based on their obvious relationship and the need to tackle them all with the greatest economy of time and resources.

1. Waterfront Redevelopment. This will give the city a new image and will allow us to take the most extensive and intensive advantage of its coastline. Mixed-use buildings are foreseen: cultural and commercial uses on the ground floor and residential use on the floors above. This establishes a continuity with the traditions of the city in this regard, and offers a model in line with European traditions based on outdoor cafes, art galleries and restaurants, bars, shops, and bazaars.

On the other hand, there’s the Port of Havana sector, whose regeneration is a model for the entire city. We intend to turn this area into a modern commercial and sports center that will contribute to a new image of the city and permit the re-creation of its history, the recycling of its economic functions, and increase the attractiveness of the capital in general.

2. A Stronger Polycentric Approach. This is essential. It includes the creation of new urban centers in proposed development facilities to the west (site of the former Columbia airfield) and east. This approach reduces the city’s expansion to its peripheries, limiting the need for excessive traffic and travel.

3. A New Public Transportation System. This will provide an efficient and rational use of existing and proposed road infrastructure, and makes it possible to have varied and modern means of transportation (train, buses, cars) that don’t pollute the environment. The plan includes surface and underground transportation, and one of its branches calls for the construction of a tunnel parallel to the coastline, which will create a promenade along the coast from Jaimanitas to Cojimar.

4. Infrastructure Upgrading. At present, the city’s infrastructure is outdated, totally inadequate and insufficient. This upgrading will give Havana improved and expanded water services, electricity, sewerage, telephone, high speed internet, and other services. An increase in public space is planned to respond to the idiosyncrasies of Cuba, its customs and traditions. In the coastal area and the bay a buffer zone will be established, which will contain a possible rise in sea level due to climate change resulting from global warming.

5. Social and Cultural Integration. The culmination of a full use of the city, its neighborhoods and spaces by all people, with free access to all facilities and buildings.

7. A New Image of the City. This speaks to the city’s transformation and vitality as a result of urban and civic actions.

8. The Revitalization of Roadways and Other Routes at the City Level.

9. Mixed Use. This is part of the tradition of the city. It provides the vitality and variety necessary for urban life by combining various functions that address different social groups.

10. A Broad View Combined with Detailed Urban Design. The city must be dreamed, designed and conceived for a future that transcends the mark of a particular era, and its construction results from the efforts and intervention of several generations. The urban plan should propose projects of different scales that could be built at various points in time, and whose flexibility accepts transformations as circumstances require.

What makes this project different from others that preceded it?

We propose a holistic and integrated vision. The previous plans did not consider Havana for what it is: a whole, a territory with a particular ecosystem that arises from its geographical condition, its idiosyncrasies, and its culture. For the first time in history, and this is perhaps its greatest merit, this Master Plan conceives and develops ideas to transform the capital city in the short, medium, and long term, and to turn it into a modern city that honors its long history and expresses its continual process of change.

Unlike the plans outlined in the colonial period, which were of a military nature; those of the Republic, which were fragmented and limited only to certain areas; and those made by the Planning Department during the revolutionary period, which were dictated by the government and its priorities, the Master Plan for Havana of the 21st Century seeks to preserve the values of the existing city while emphasizing the need to create new economic and urban values.

In addition, this plan does not follow any government dictates or orders. It is a labor of love for the city, done at no charge. It is a gift, a personal contribution.

Coming in Part 2: Pérez on architecture in Cuba, the problem with “starchitecture,” and what Americans think of Cuba’s architectural heritage.