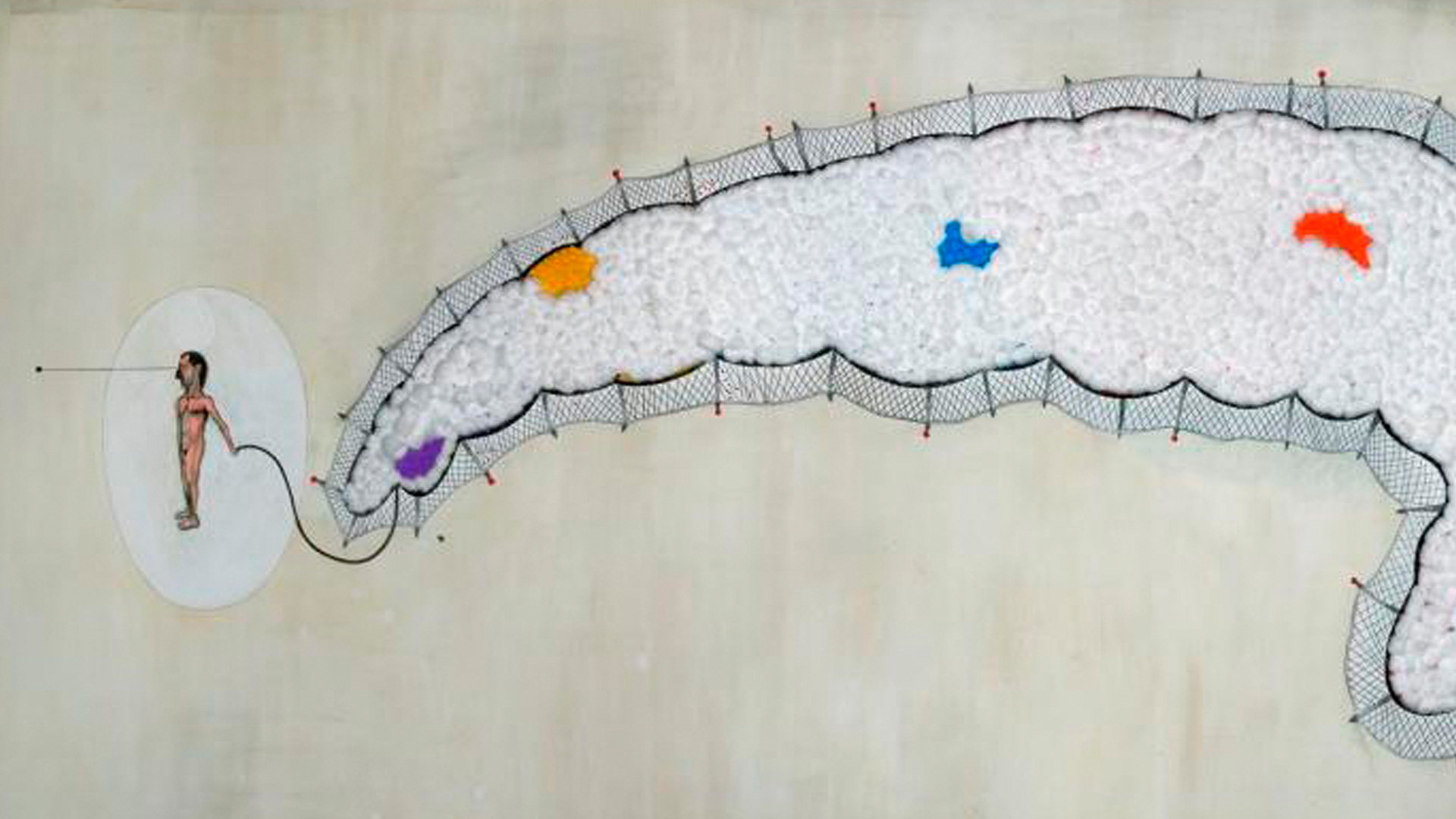 Cuban-born artist Luis Cruz Azaceta left the island as a teenager in 1960—marking, in 2010, his fiftieth year of exile. With a new show currently on view at Pan American Art Projects in South Florida, he spoke, via email, about the influences that have shaped him as an artist, including his time in New York City and New Orleans.

Luis Cruz Azaceta: Trajectories/Trayectorias, the show at Pan American Art Projects, is quite substantial. How many works are on view? Could you give us a quick overview?

There are about 30 to 35 current works: paintings, constructions, works on paper and an installation. Primarily the show is divided between Cuba and New Orleans. With Cuba, I’m dealing with the balsero experience that I’ve explored for many years, along with a new series called “Swimming to Havana” that addresses the absurdity of the Cuban condition. The New Orleans works deal with post-Katrina and the BP oil spill. In addition, there’s a few other works that focus on terrorism.

Let’s back up a moment. How would you define ‘the absurdity of the Cuban condition?’

I think the idea of Cubans on the island wanting to leave and those of us in exile wanting to return creates the absurdity which is the ongoing state of suspension. In Swimming to Havana I, for instance, all roads lead to nowhere.

Yes, its my first show with Pan American Art Projects. I’m excited that they chose to do such an extensive exhibition and to extend it through Miami/Basel. I’ve participated in Miami/Basel and some of the satellite art fairs in Wynwood. I enjoy being in Miami during that time, getting together with Cuban artist friends. It’s a time of reconnecting.

2010 marks your fiftieth year of exile. That’s reflected in many of the works here, sometimes appearing as a combination of sadness and yes, absurdity. Could you talk about this fact of exile, and the influence it’s had on your work?

My work is informed by my exile experience. I’ve always felt myself living between cultures, in a particular space called EXILE.

A painting in the show called Exile 50 is about that state of “neither here nor there.” In the painting, a small, self-portrait figure is holding by a thread a large island of Cuba—holding the island like a kite or cloud. The entire island is covered with cotton balls and surrounded by 50 spikes that create a fence of enclosure.

So you’re not able to return to the island, even under the 2009 rules easing travel restrictions for Cuban Americans with close family members on the island?

Exile from Cuba has helped define you as an artist, but there are other factors at play, no? For instance, you lived in New York for decades, and now have lived in New Orleans for many years.

I became an artist in New York City. Graduated from School of Visual Arts and my first show was in 1975 at Allan Frumkin Gallery on 57th Street. I became one of the first contemporary Latin American artists to show in a blue-chip gallery in New York. New York certainly formed me as an artist—I lived there 32 years. My work there focused on the environment: urban violence, subways, the AIDS epidemic, identity and the homeless.

Like New York, New Orleans has also influenced my work. Photography and constructions entered my work [when I came here]. There is a funky, makeshift environment here, where incongruent objects come together—I find that attractive. I’m drawn to distressed areas where I find a sense of soul and beauty.

You can see a certain connection between New York and New Orleans in some works in the show: Two Towers, a construction that references 9/11, is made up of discarded plywood and weathered boards from old New Orleans shotgun houses and other found objects from the streets here. I used this material to convey a sense of fragility, vulnerability and impermanence.

The installation [at Pan American Art Projects] allows for a visual dialogue between Two Towers and Katrina’s Boat. Both share similar materials.

Other New Orleans works share a strange parallel with the works about Cuba. Entrapment is an element in both Tub: Hell Act, which depicts a number of balseros confined within a huge tub, and Bowl, where flooded neighborhoods float inside a large bowl. Both exist in a limbatic state.

So I guess there’s a lot of crossover with my Cuban sensibility and New York and New Orleans experiences.

Miranda Lash, curator of modern and contemporary art at the New Orleans Museum of Art, has written that you move “between abstraction and figuration, between geometric and organic forms.” How do those crossovers play out in your work?

Abstraction allows for containment and absurdity by creating tunnels, labyrinths and highways that become chambers. Figuration also adds to the absurdity as a small, self-portrait figure plays out against an engulfing environment—trapped within a condition. No exit.

2010 seems like a milestone year, starting with the show at the New Orleans Museum of Art and wrapping up with your return to South Florida with this show. How would you describe where you are in your career, and in your art, right now?

Yeah, getting old but always looking for hope that I find through painting.

What’s next for you?

I have three solo exhibitions right now: Trajectories/Trayectorias at Pan American Art Projects in Miami, Intrusion in Paradis at Allegro Gallery in Panama City, and Laberintos at Lyle O. Reitzell Gallery in Santo Domingo [which has closed since this interview took place]. And also the 1Trienal Internacional Del Caribe at the Museo De Arte Moderno, Santo Domingo [also now closed].

Upcoming, I have a couple of works in a very large exhibition at the Palacio De Bellas Artes in Mexico City called Art and Confrontation, curated by Gerardo Mosquera, which will be traveling to the Centre Pompidou and other venues.