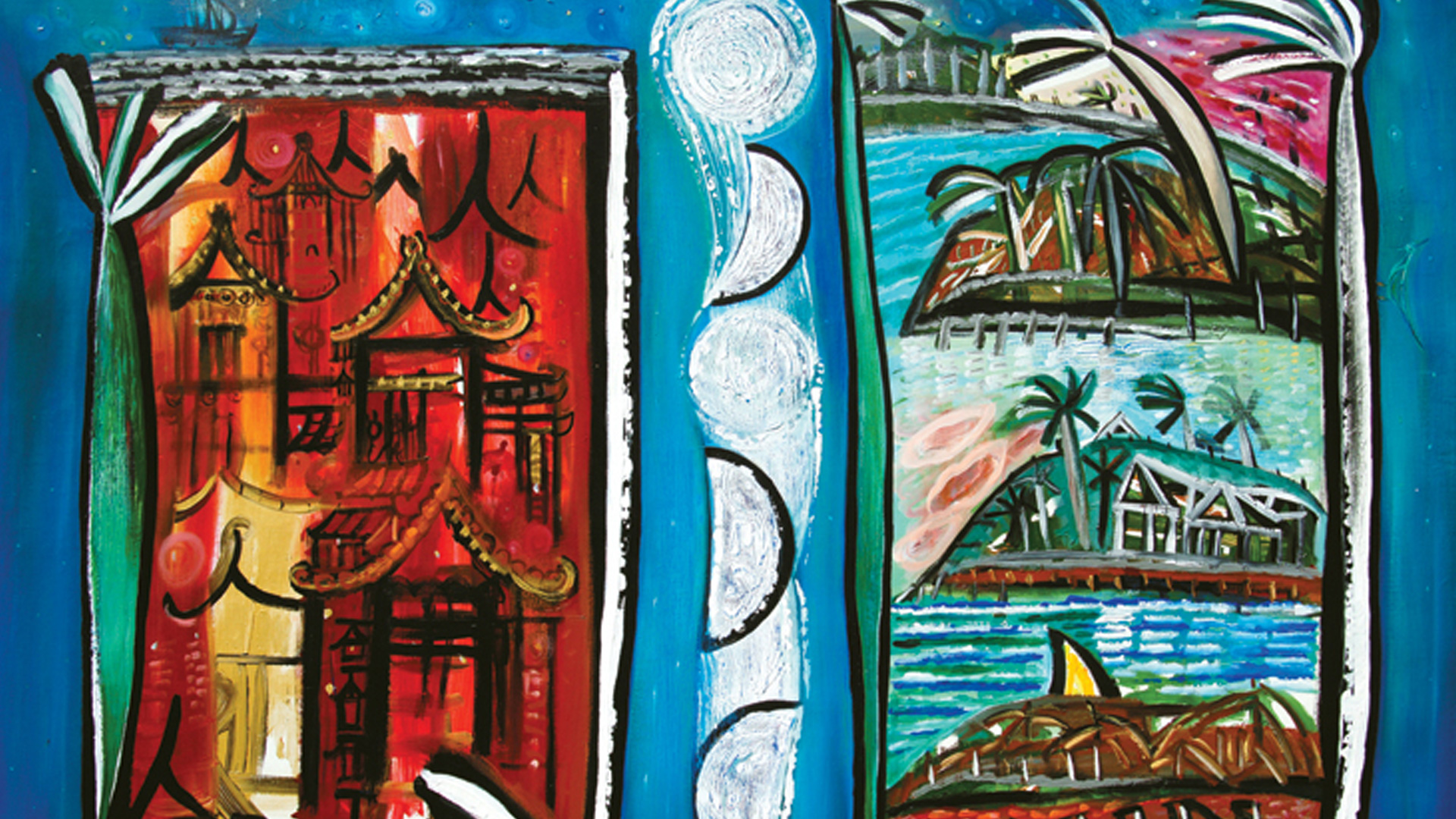 The two artists will travel from Havana for the exhibition opening.

The show features more than 40 paintings by the two artists, reflecting their dramatically different styles. Flora Fong is internationally recognized for vibrantly colorful compositions reflecting both her own Caribbean roots and her Chinese ancestry. By contrast, says gallery director Ramón Cernuda, Li Domínguez Fong works in a color palette that’s “very different from Flora’s, mostly in the range of blacks, whites, silver and gray. His work is very enigmatic, and his compositions are audacious. It’s a world of dreams, a lyric world—very intimate.”

Also on view are five small-scale, one-of-a-kind bronze sculptures by Flora Fong, depicting many of the tropical motifs found in her paintings: fish, the sea, palm trees, coffee pots, tropical throne chairs. “The National Museum in Havana gave her a one- person show of sculptures last year, large and small-format ones like these,” says Cernuda. “We were going to show six of them,” he says with a chuckle, “but we’ve already sold one to a collector who wanted it immediately. So we’re down to five.”

In pairing the artists in a double show, what interested Cernuda most was how different their work is. “Usually, with a father or mother and son or daughter who are artists, you see the child incorporate much more of the parent’s influence. It’s so interesting to see how Li has chosen his own path, and that it is absolutely different from his mother’s. At the same time, they’re so close and supportive of each other. That makes it interesting.” While Flora Fong’s work is the stronger draw for art critics, once they arrive at the gallery, Cernuda says, “they discover the strength of Li’s work. We’re going through that now, that sense of discovery.”

The exhibition opening marks Flora Fong’s first visit to the U.S. since 2001, and Li Domínguez Fong’s first U.S. visit. “We’ve tried to get this show together for the last four years,” says Cernuda, “and we just couldn’t do it. After 2004, it was virtually impossible to get a visa for any Cuban artist. Recently, the policies changed, which is why we’re able to do this.”

Flora Fong & Li Domínguez Fong – The Mother, The Son: Two Artists, One Passion runs through October 20. A 36-page exhibition catalogue is available at the gallery.